'I think I will commit suicide': Cargo ship workers have been trapped at sea for months because of COVID-19, banned from ports, and predict 'anarchy' if things don't change 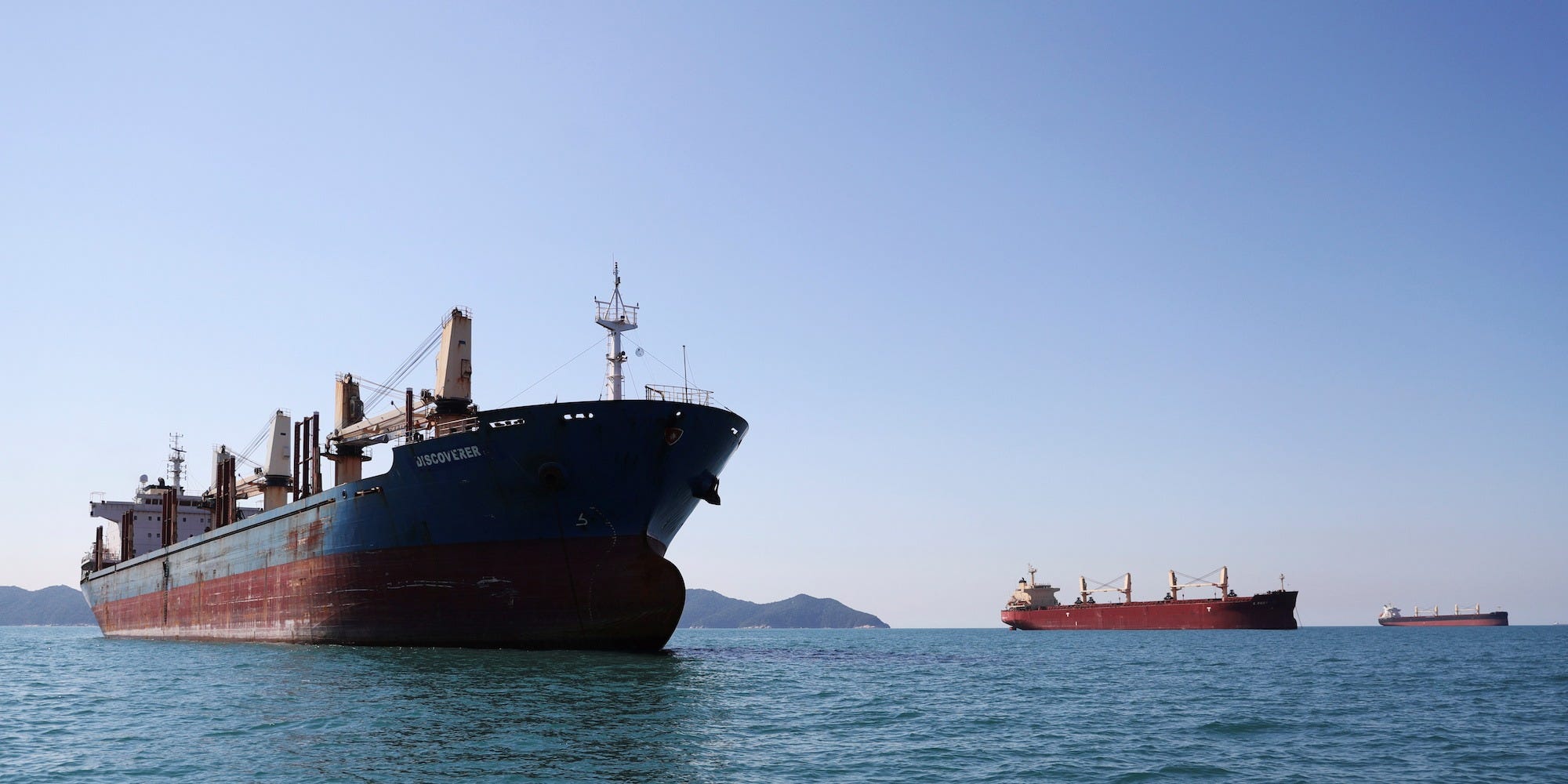 Bulk carriers line up as they wait to dock and be loaded with cargo, amid the coronavirus disease (COVID-19) outbreak, near Santos Port in Santos, Brazil June 1, 2020.
Picture taken June 1, 2020Amanda Perobello/Reuters

Shipping unions say there is a "humanitarian crisis" as an estimated 300,000 cargo ship workers remain trapped on board during the pandemic.

Cargo ship workers are warning of a looming disaster as some 300,000 people are effectively trapped at sea in the coronavirus pandemic.
Multiple sources told Business Insider about conditions onboard, where some workers have not been on land for more than a year.

Seafarers spoke of mounting suicidal thoughts, and described a "ticking time bomb" for potential accidents, in a report published in June by the International Transport Workers' Federation (ITF).
The federation is a group of trade unions, whose members represent around 30% of the global seafaring workforce.

As countries closed their borders during the pandemic, thousands of workers — who transport 90% of the world's goods — were forced to work or remain on board long beyond their contracts, which usually run for four to six months.
Even as many countries reopen, shipping firms are struggling to arrange for new crew, which means everybody has to stay on board.

The situation means some of the industry is breaching the international Maritime Labour Convention (MLC), according to the ITF.
The agreement says that seafarers cannot be made to work without shore leave for longer than eleven months.

In June more than a dozen countries recognized seafarers as essential workers, which was meant to ease the bureaucratic hurdles to getting them home, or at least on shore.
But in a statement on July 16, the ITF said many governments were still not doing "nearly enough."

Workers were reluctant to speak to Business Insider even anonymously for fear of reprisal from their employers.

However, two organizations — the ITF and The Mission to Seafarers, a Christian charity — are in direct contact with seafarers and have produced reports based on their experiences.
The seafarers were anonymized by the organizations. 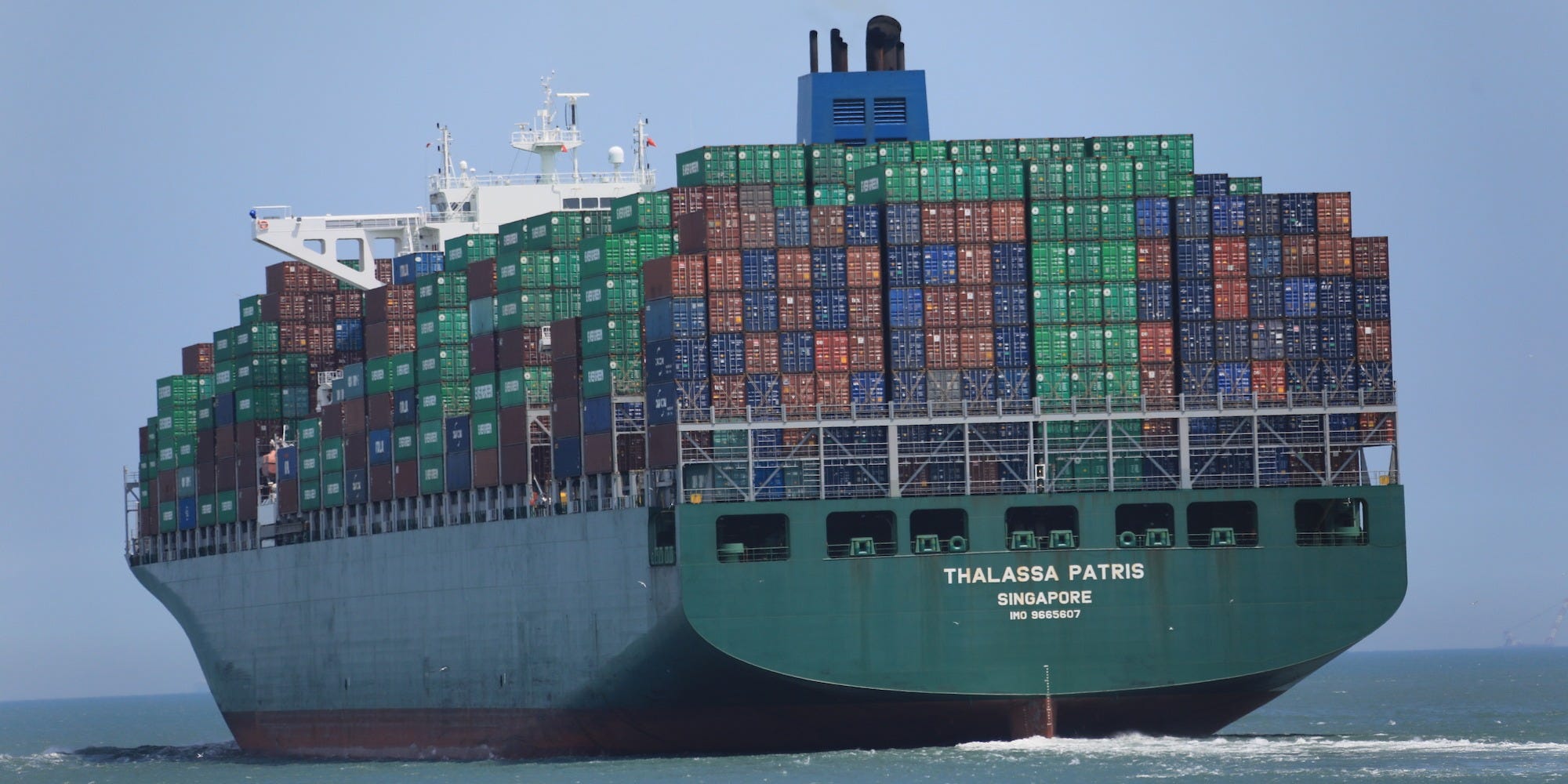 The container ship 'Thalassa Patris' from Singapore leaves the Xiamen Port on July 24, 2020 in Xiamen, Fujian Province of ChinaZhou Daoxian/VCG via Getty Images

The workers keeping the world turning

On land, it seemed like the world ground to a halt during lockdown.

But the oil for energy, the food on supermarket shelves, the goods for Amazon orders, and medical supplies for hospitals all kept coming — because of cargo ship workers who mostly had no choice but to go on.

"Crews are reading of empty supermarket shelves and panic buying and are proud that they are doing everything they can to help keep society supplied with essential goods," read the introduction to the Seafarers' Happiness Index for Q1 2020, produced by the Mission to Seafarers.
That was at the end of March.

But as the pandemic continues, that is taking an immense human toll, in what the ITF described in its report as a "humanitarian crisis." 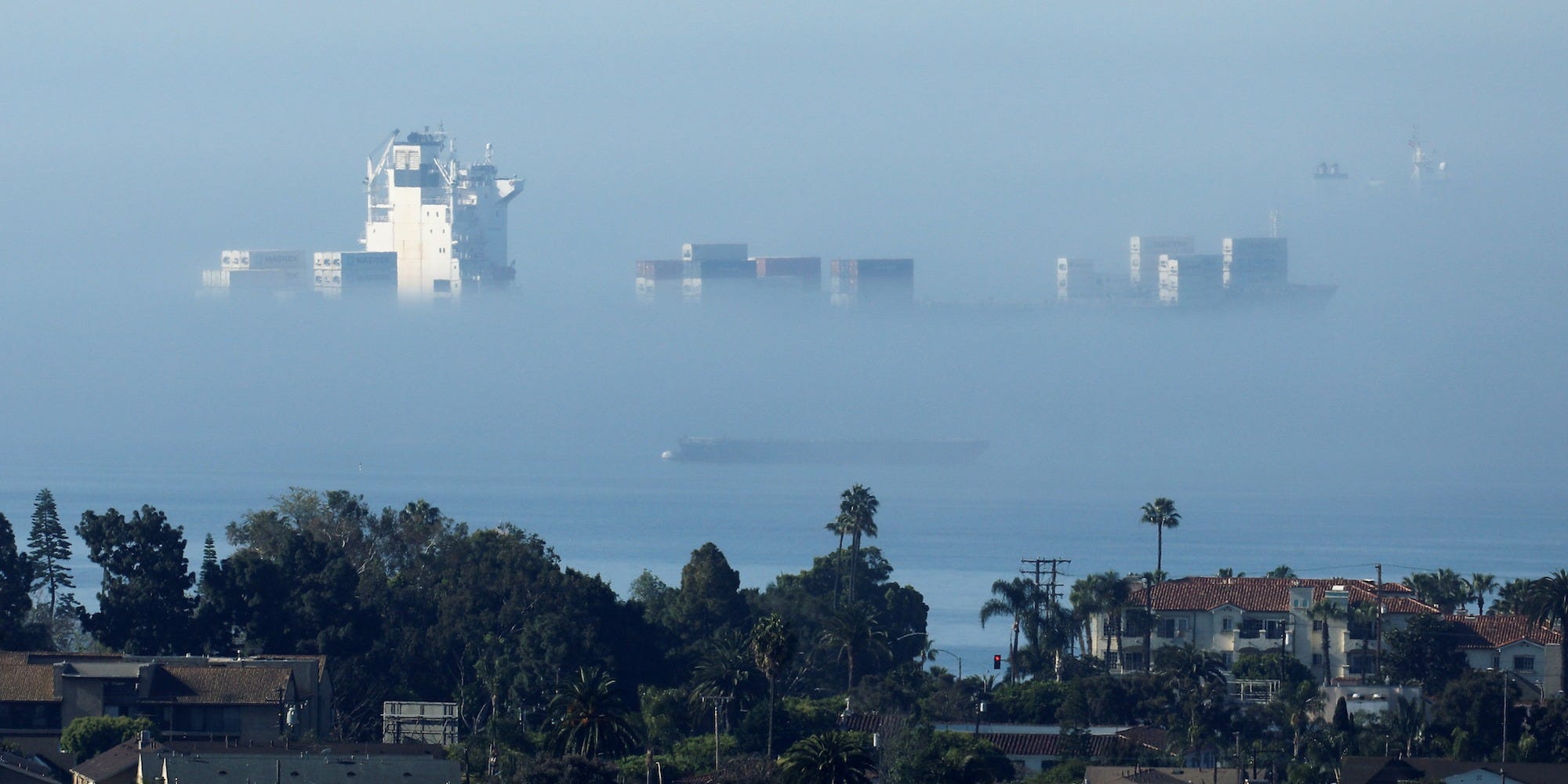 A cargo ship sits in the fog off the shore of the Long Beach port during the outbreak of the coronavirus disease in Long Beach, California, U.S., April 23, 2020
Mike Blake/Reuters

"Sometimes I feel I won't survive"

The ITF surveyed 867 seafarers at the end of May, 70% of whom had been forced to extend their contracts.
A small proportion — around 5% — said they were not being paid.

Many spoke of mental health struggles, missing their families, and compared their situation to imprisonment or slavery.

One Swedish seafarer, stuck at sea for four months, asked: "Would you lock the door to, for example, a factory to isolate people from COVID-19? Unless you are a ruthless dictator, you would most likely not even consider it."

A lack of access to medical care has also been an issue.
A captain for the Emma Maersk has had to treat arthritis and — despite not being a dentist — pulled the teeth of two of his crewmembers.


Captain Jens Boysen disembarked one of the world's largest container ships on Thursday after 167 days at sea when he has acted not only as captain but also as a doctor, a dentist, a mental coach and entertainment director for his stressed-out crew members.
The coronavirus pandemic left almost 200,000 sailors like Boysen stuck onboard merchant ships, some for more than a year, because health travel restrictions make it almost impossible to rotate crews, according to the U.N.'s International Maritime Organization (IMO).
"I got medical advice, and then I pulled the teeth out," Boysen said, standing on the dock in Hamburg after bidding his crew farewell. "It felt almost like a war situation," he added.
To keep up the crews' spirits, Boysen organized karaoke tournaments, bingo and piggy-back races. The captain, who has accrued a vast amount of holiday along with some paternity leave, has no intention of taking a brief vacation - he's taking the rest of the year off.

A spokesperson for Maersk told Business Insider that in serious cases workers are airlifted to safety, and that captains do have basic medical training.

Two seafarers said they had not been able to see family members who have since died onshore.
"Words are not enough to explain the hardships I've faced," an Indonesian seafarer said, after being at sea nine months.
"Sometimes I feel I won't survive this period."

Another, from Egypt and at sea for a full year, said: "I think I will commit suicide because of the stress of the long contract.
I feel that there is no meaning to life." 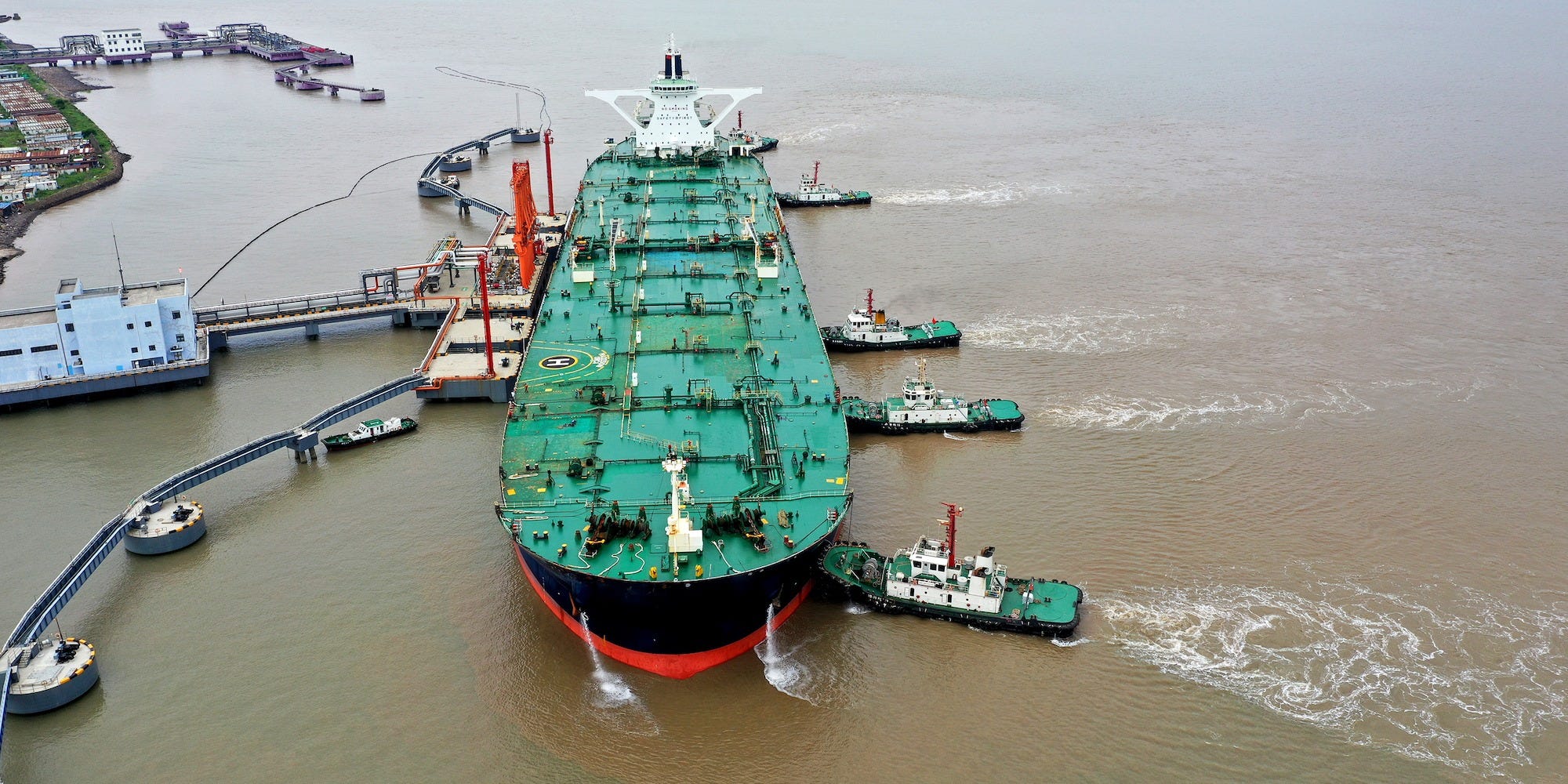 Life at sea, pushed to the limit

Reduced crews, social distancing and stringent hygiene measures have made day-to-day life awkward on board, according to the Mission to Seafarers's Q2 happiness survey.

"There is a pressure to keep hygiene standards at almost hospital levels," said the report.
Yet crews reported not always having appropriate PPE or being able to maintain effective social distancing.

"Reports of additional safety measures, such as separating tables and limiting the capacity of mess rooms at meal times, has made even the most habitual social interactions difficult," said Louise Hall, director of loss prevention at the Shipowners' Club, a maritime insurance agency, in the report.

By June, the strain on crews was beginning to show in their friendships, according to sailors in the ITF report.
An Indian seafarer who had been at sea longer than 12 months said: "We are starting to fight over little things for stupid reasons."

And basic comforts are in short supply.
One crew ran out of shampoo and, unable to wash their hair, had to shave their heads instead, according to a South African sailor in the ITF report.

Warnings of a disaster waiting to happen

"We are extremely burnt out and we don't care about anything on the vessel anymore.
Just going each day like robots," said an Indian sailor at sea more than a year.

"You guys are waiting for a ticking time bomb to explode.
You will not get your cargo and you will have a huge environmental disaster."
The sailor predicted that we "will soon see anarchy at sea."

Even though many countries are reopening their borders, there are still barriers to getting sailors home and getting new workers on board.

Many commercial flight routes hardly exist any more, meaning companies often need to charter their own planes to move crews to and from ports.

Additionally, many countries do not offer simple processes to secure transit visas and permits to come onshore.

It's not only those at sea who are struggling, the ITF said.
Another estimated 300,000 seafarers who expected to be working at sea at this time are currently onshore and unemployed. 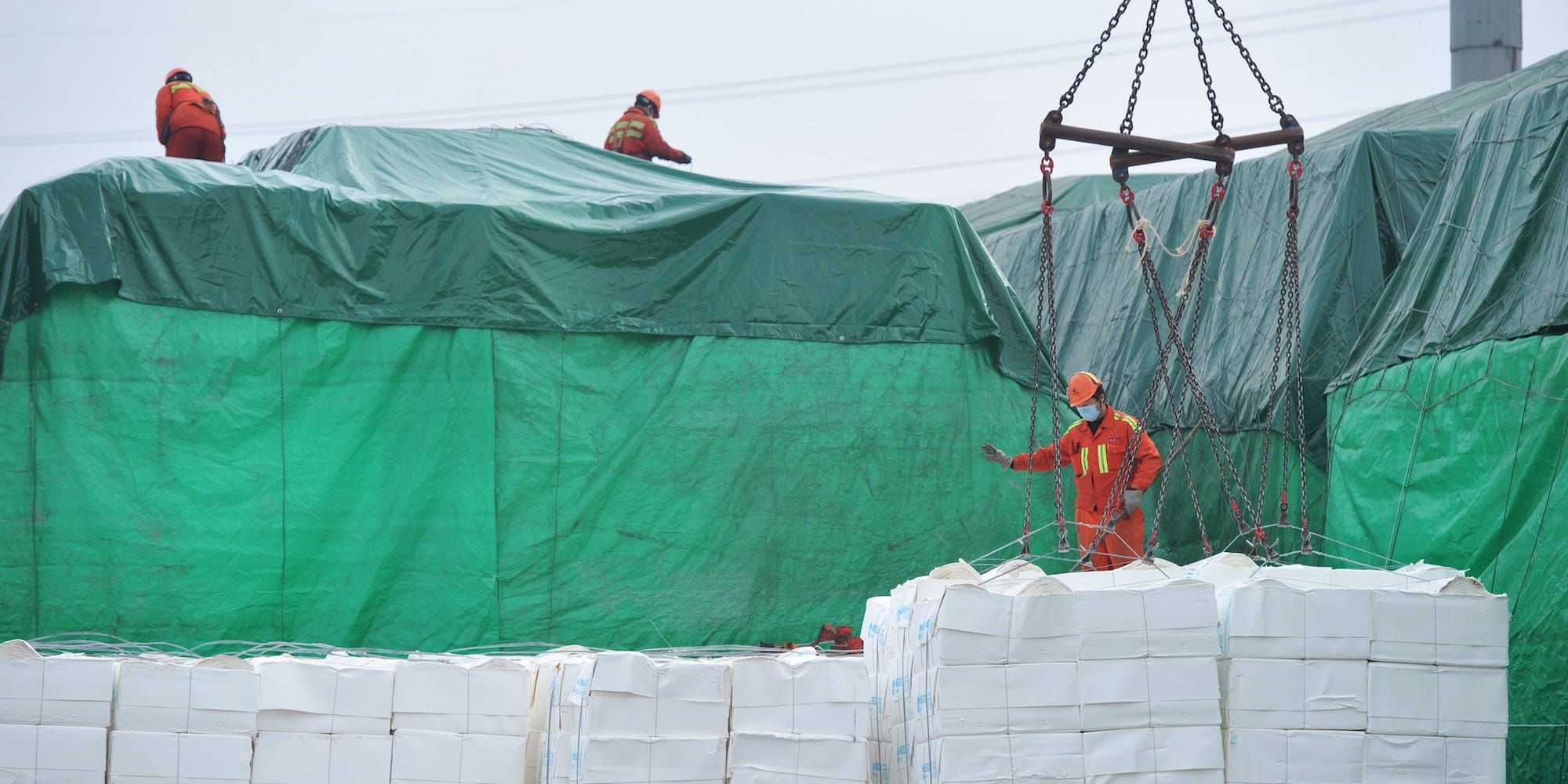 Early on in the pandemic, the ITF agreed to up to one month of contract extensions from shipping companies — with seafarers' agreement — in acknowledgement that border closures had made it practically impossible to do otherwise.

But on June 15, as more and more countries opened up, the union's patience ran out.
The ITF's position is now that it will support strike action on ships, if the crews chose to take it.
On July 9, several governments committed to speeding up the process of crew changes.

But, more than three weeks later, they still "aren't doing near what is needed and some governments have even gone backwards," according to Dave Heindel, chair of the ITF seafarers section.

Comparing the poor treatment of commerical sailors to military personnel, one South African seafarer in the ITF report said: "You let your soldiers repatriate, but you want the men and women who maintain your economic life blood to suffer in depressing, dangerous isolation."
"Who are you going to call on when you need your trade goods delivered, who will be your seafarers?"