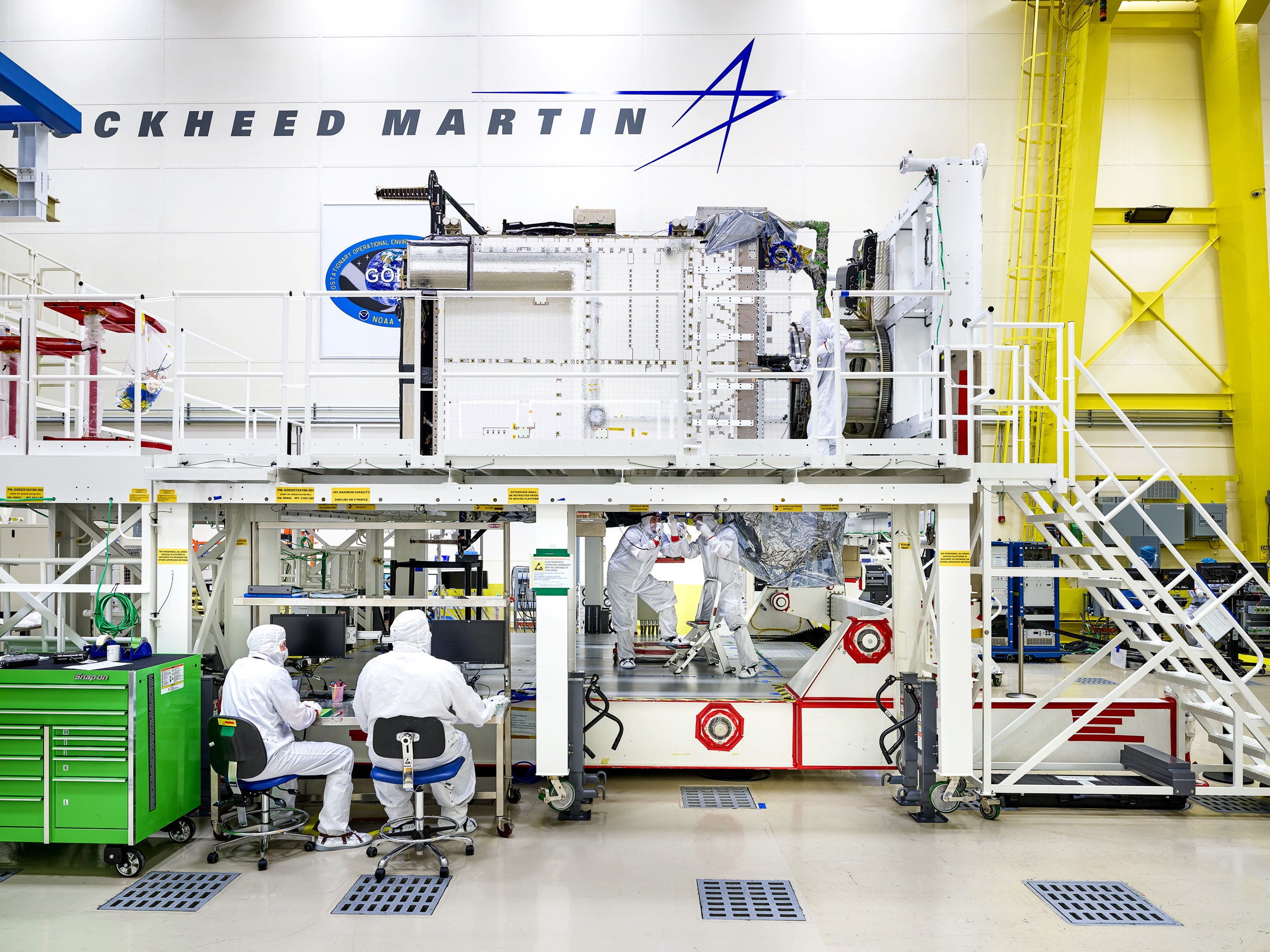 Dozens of companies from across the US build the satellites’ roughly 500 components, but they’re all assembled at Lockheed Martin’s facility in Littleton, Colorado.
Once built, each satelllite is run through a battery of tests—extreme heat and cold, intense vibrations, and a total vacuum—to make sure it can handle the rigors of space.
If it passes, the sat is loaded onto a massive C-5 military transport plane for delivery to Kennedy Space Center in Florida, to be launched into orbit 22,000 miles above the Earth.
Photograph: Christopher Payne

From Wired by Daniel Oberhaus

A new array of sats will detect nearly every bolt of lightning in the Western Hemisphere, powering an early warning system for climate-change-fueled superstorms.

For ages, earthlings regarded lightning as an indicator of godly wrath.
To understand what displeased a higher power, you followed the damage from Thor's hammer strike, Raijin's drumbeat, or the javelins hurled down by Zeus.

Today scientists have their own God's-eye view of lightning, with instruments that orbit about 22,000 miles above the planet, monitoring nearly every single strike that flashes across the Western Hemisphere.
Lightning, it turns out, is still an indicator: Increased electrical activity in the atmosphere is a bellwether for the onset of severe storms—a reflection of the damage inflicted not by any god but, at least in part, by human-made climate change.

To be sure, the National Oceanic and Atmospheric Administration has used a network of weather satellites to track storms since the mid-1970s.
But six years ago, engineers at Lockheed Martin began assembling a new generation of four 6,000-pound weather satellites—known as GOES, or Geostationary Operational Environmental Satellites—with an array of instruments that can track everything from plumes of volcanic ash to space weather.
In orbit, each satellite looks like an old-fashioned movie camera pointed toward Earth, with a boom sticking out the back (a device for measuring changes in the planet's magnetic field to study solar wind) and a massive solar panel where you'd expect to see a film reel.
In the place where the lens would go is a device that picks up emissions from oxygen molecules that get excited by the energy of an electrical storm: a lightning detector.

The first of these new satellites was launched in 2016.
Within six months, it had collected more data than all 15 previous GOES satellites amassed over four decades.
A second new satellite went up in 2018, and the two have already changed our understanding of lightning.
Unlike weather stations down on terra firma, these satellites have no trouble watching electrical current zip between distant clouds.
Bolts of lightning, it turns out, have a far longer reach than earthbound meteorologists ever realized.
“That old phrase about a ‘bolt from the blue’ can really happen,” says Pam Sullivan, NOAA's system program director for the new satellites.
“Lightning from a storm can actually reach out and strike ground that's hundreds of kilometers away.”

Two more satellites will be launched in 2021 and 2024.
With all four in orbit, they'll provide data that helps power NASA and NOAA's forecasting models.
All told, the $10.8 billion fleet could dramatically improve our ability to understand severe weather—and stay safe on the ground during megastorms.

In December 2019 and February 2020, photographer Christopher Payne visited Lockheed Martin's facilities in the hills of Littleton, Colorado, and in Sunnyvale, California, respectively, to capture their manufacturing and assembly. 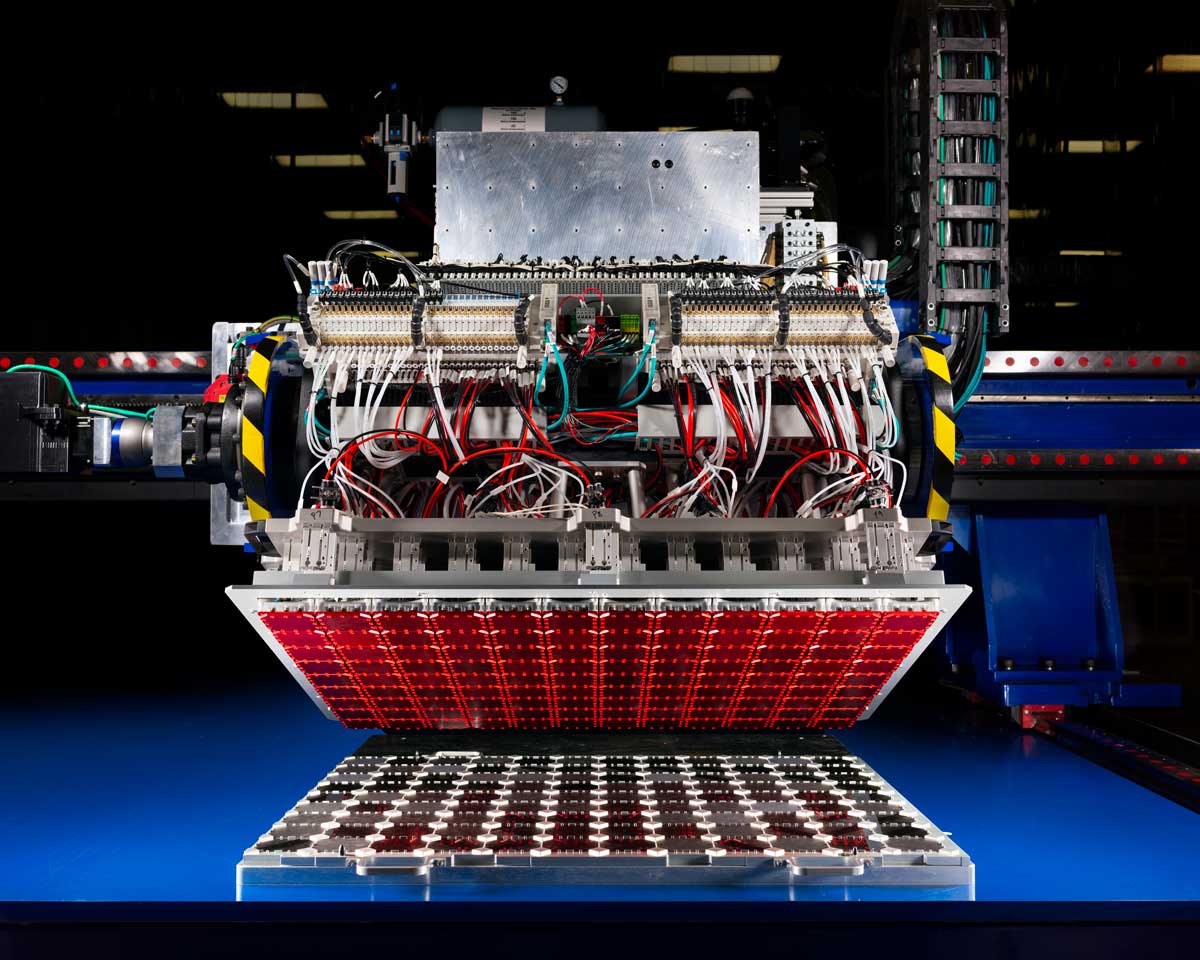 This machine uses a precise vacuum system to lift solar cells onto their panels. 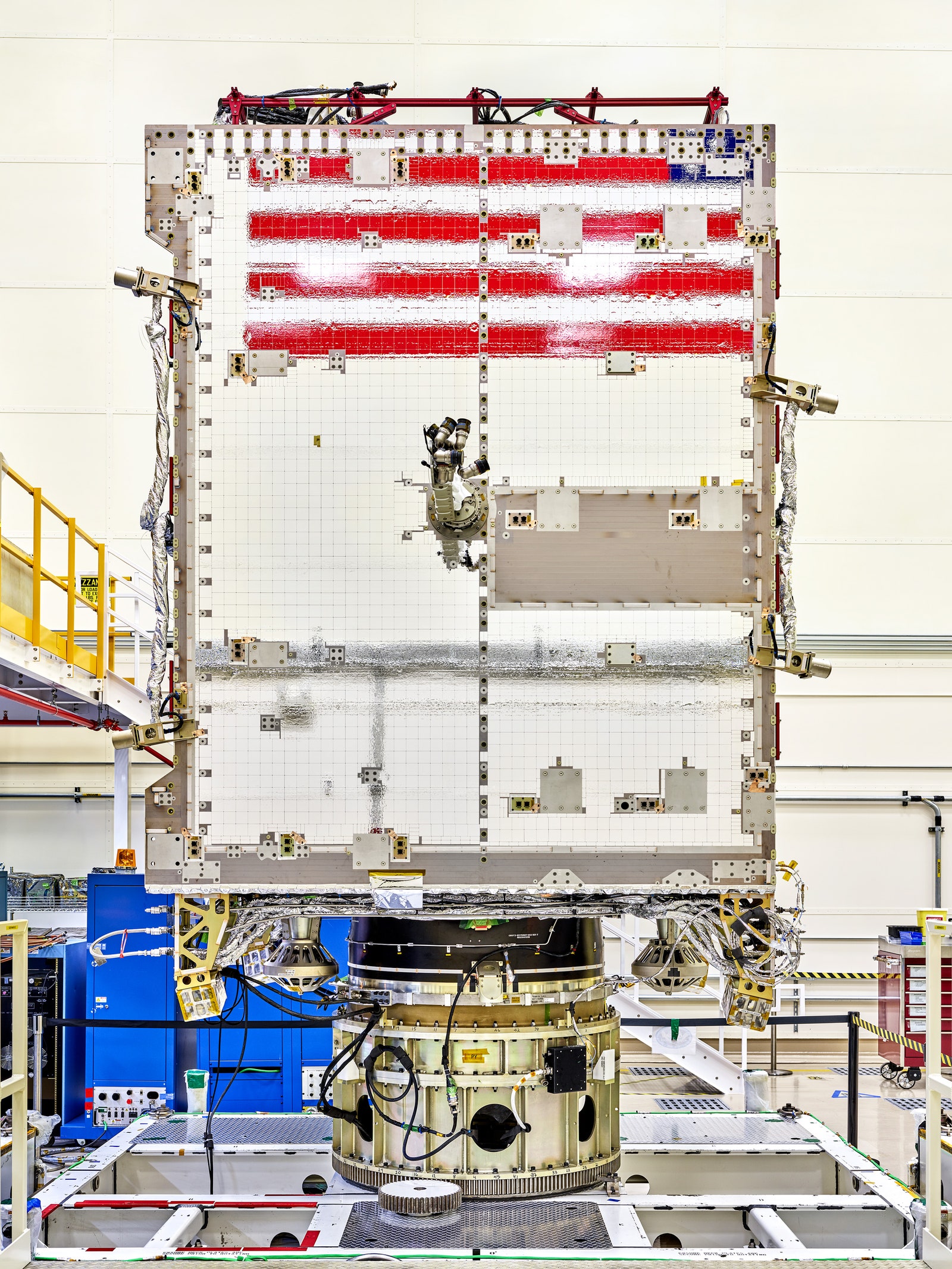 The American flag is reflected in optical solar reflectors on the fourth and final satellite that will be launched as part of the National Oceanic and Atmospheric Administration’s next-generation fleet of Earth-monitoring satellites.
Four of these panels surround the satellite’s body and help regulate its temperature by protecting it from the sun’s heat.
The gold ring is where the satellite will connect to the rocket that will launch it into space in 2024. 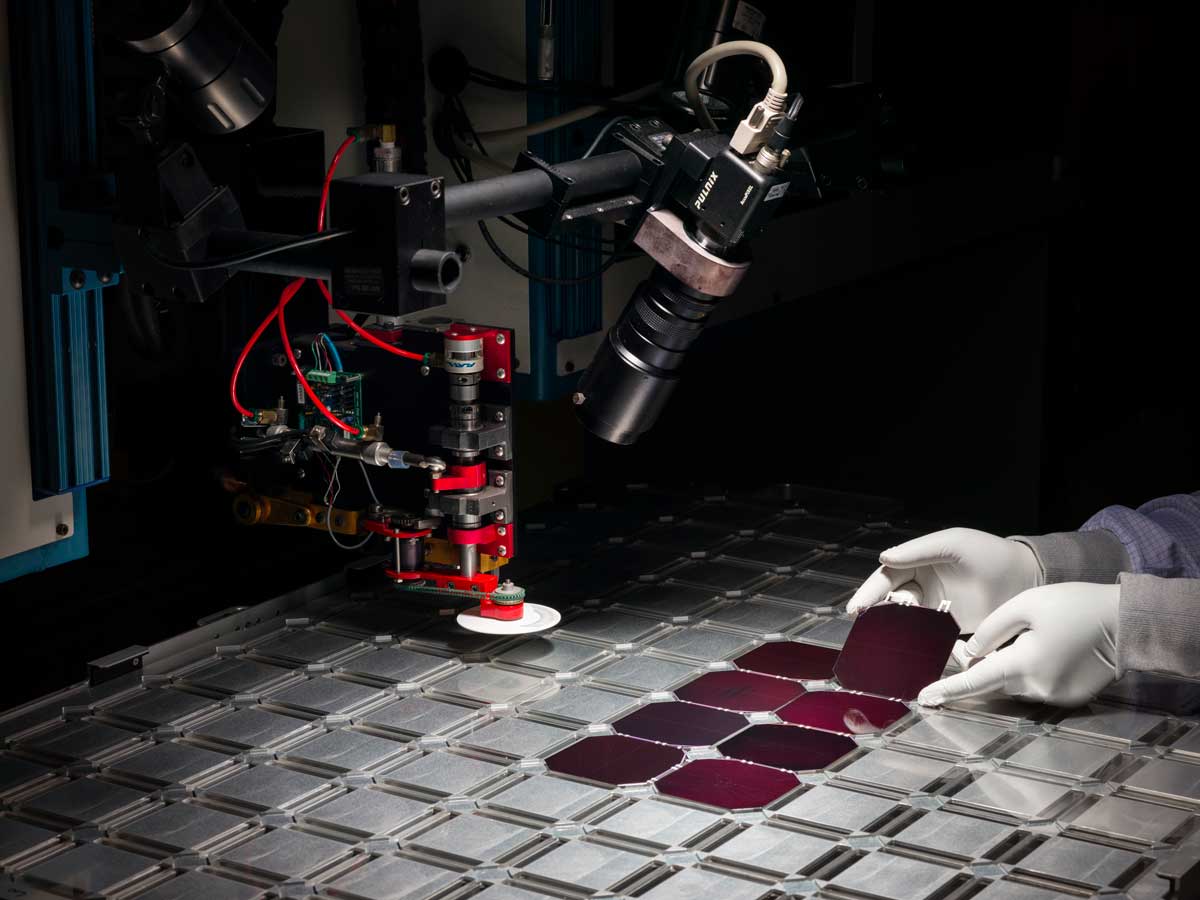 A technician lifts a solar cell that a robot has just finished welding. 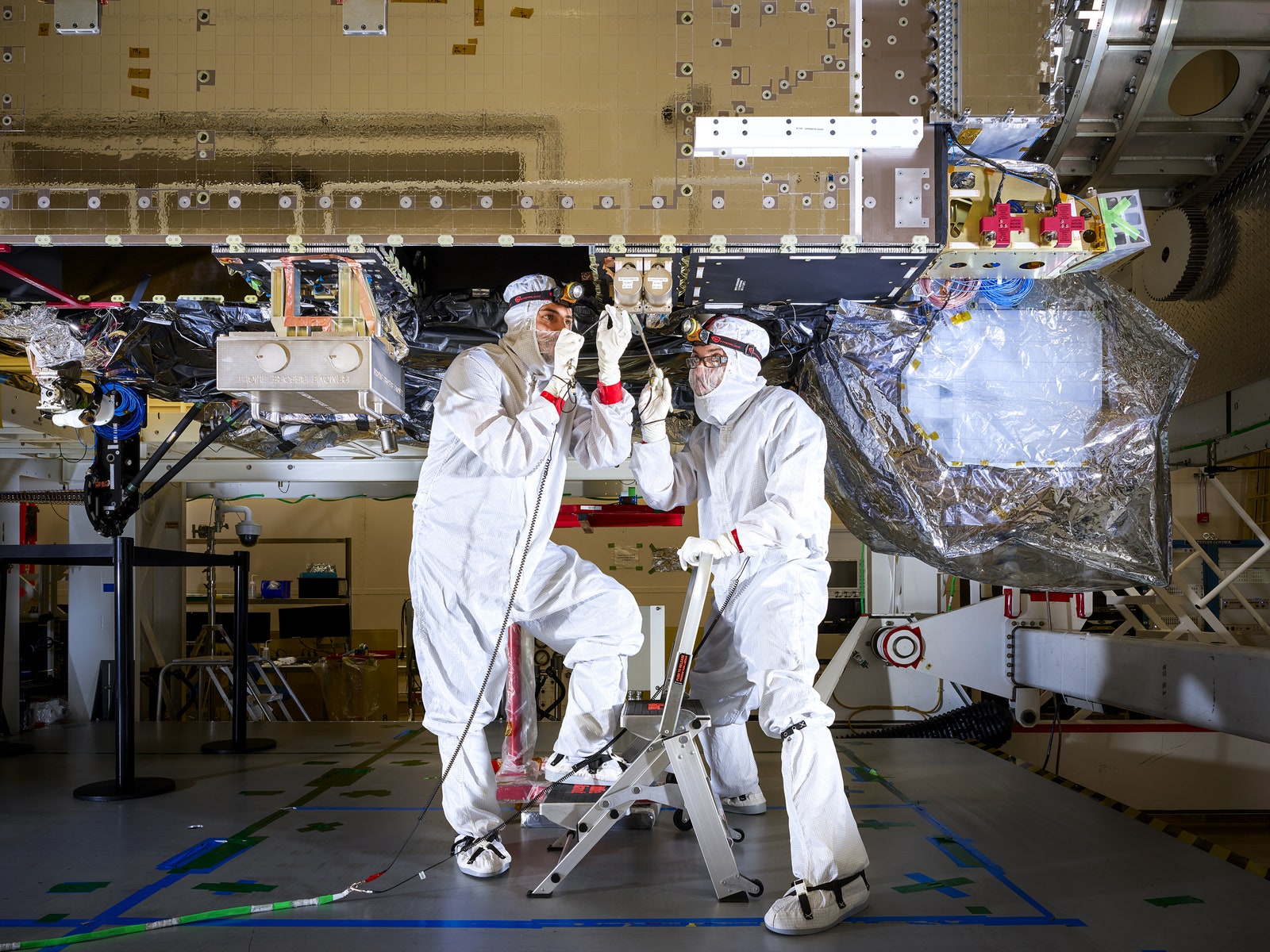 Lockheed Martin technicians work on thrusters, which will make microadjustments to keep the satellite’s position steady. 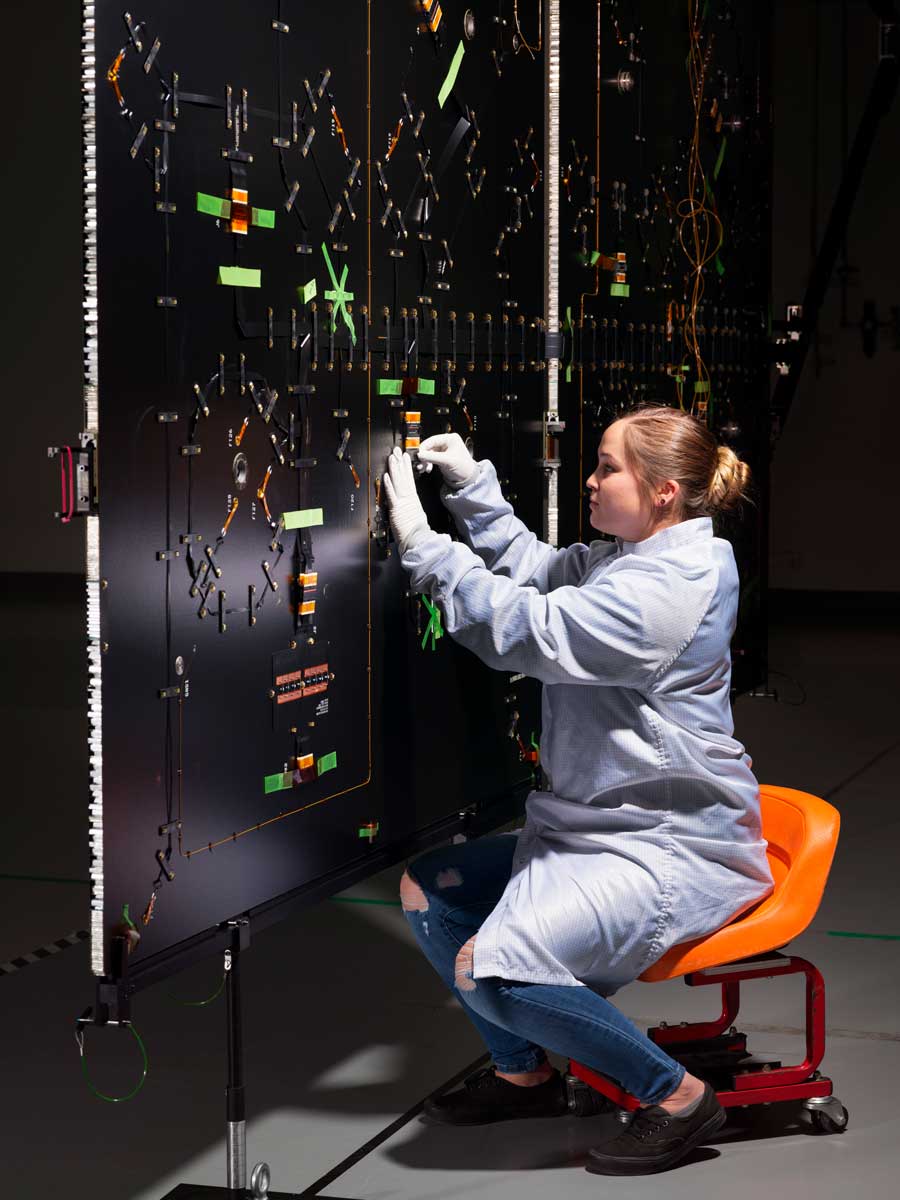 A technician inspects electrical systems behind a solar panel. 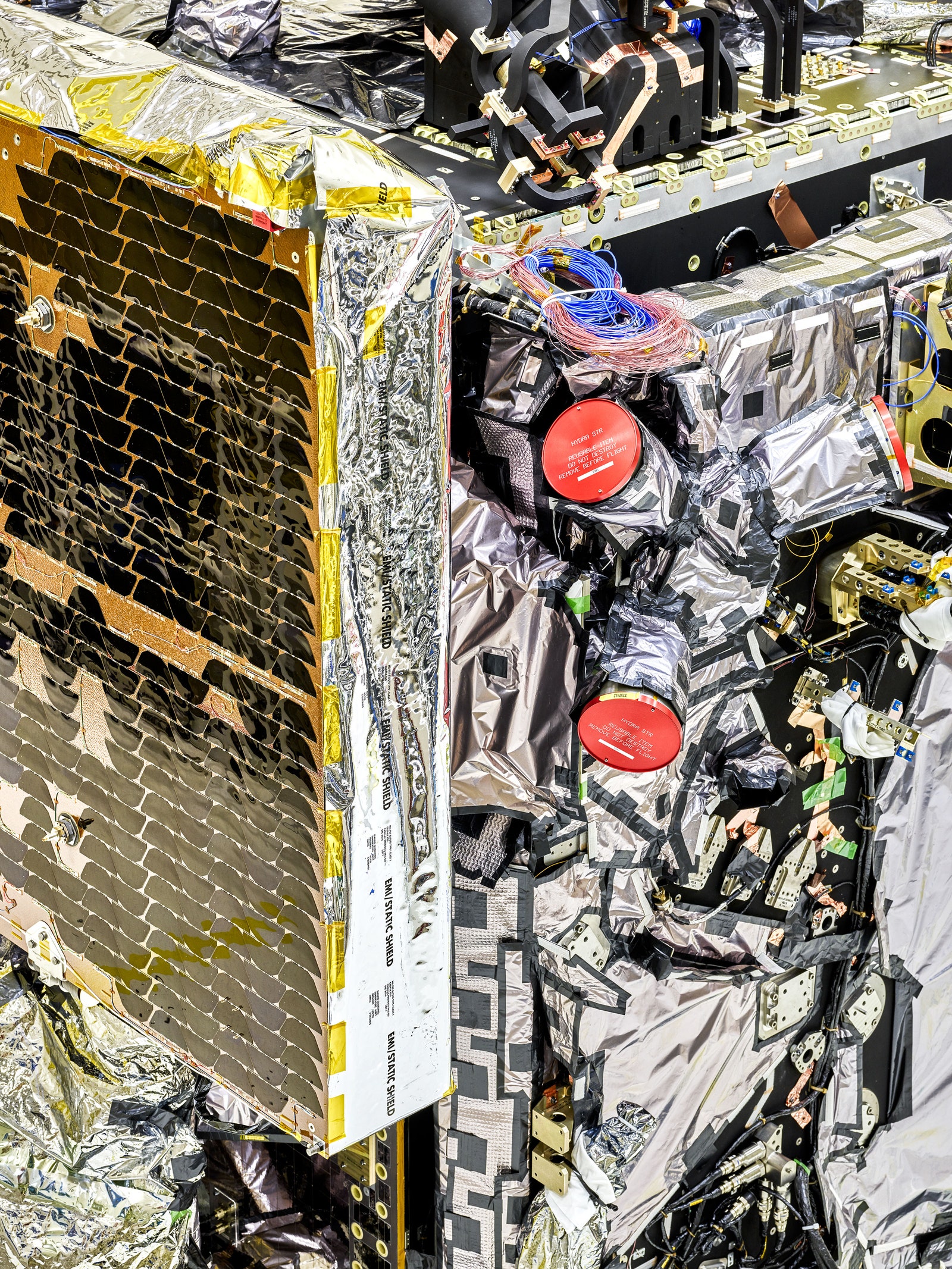 Red caps cover the three star trackers, which help the satellite determine its position in space.
Not only do the satellites need to know where they’re pointing, they also need to remain incredibly steady.
They use six sophisticated flywheels to help stabilize against pressure from solar radiation.
When the wheels accumulate too much momentum, the satellites turn to good old-fashioned propulsion. 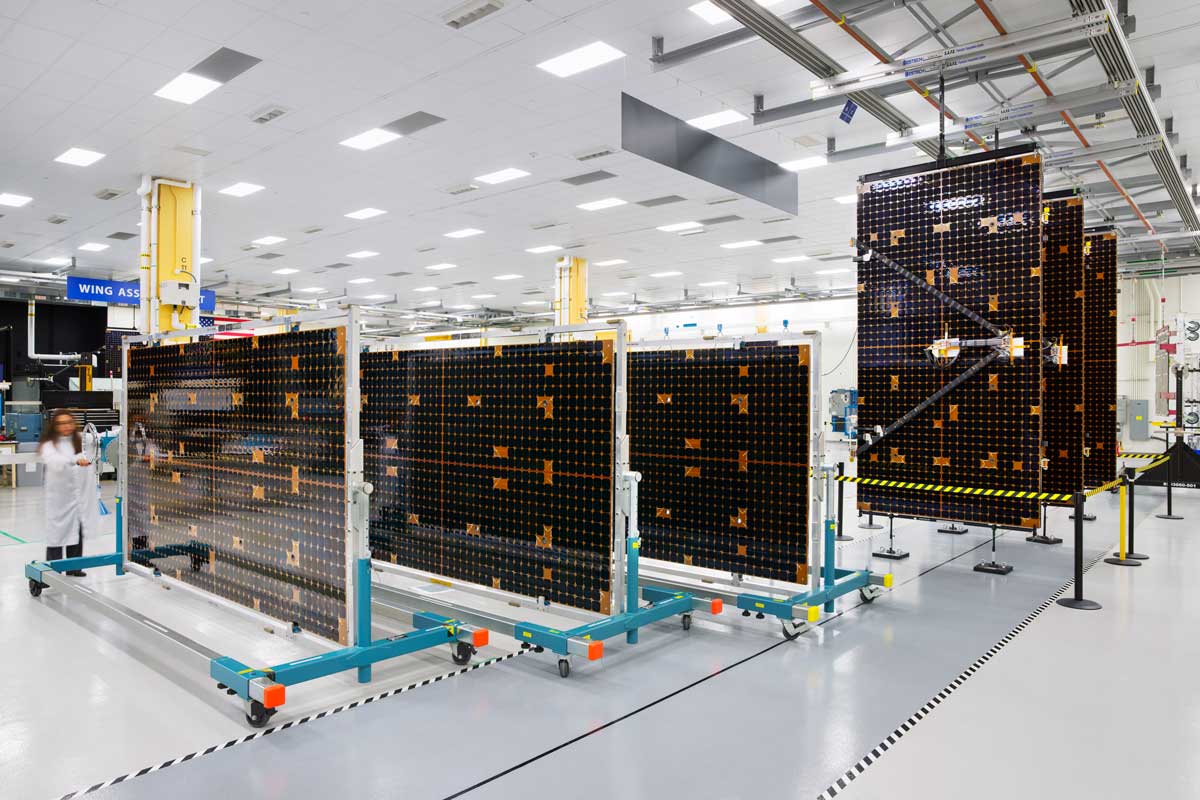 Solar panels await inspection.
All photographs were taken at Lockheed Martin facilities in Littleton, Colorado, as well as Sunnyvale, California, by Christopher Pane