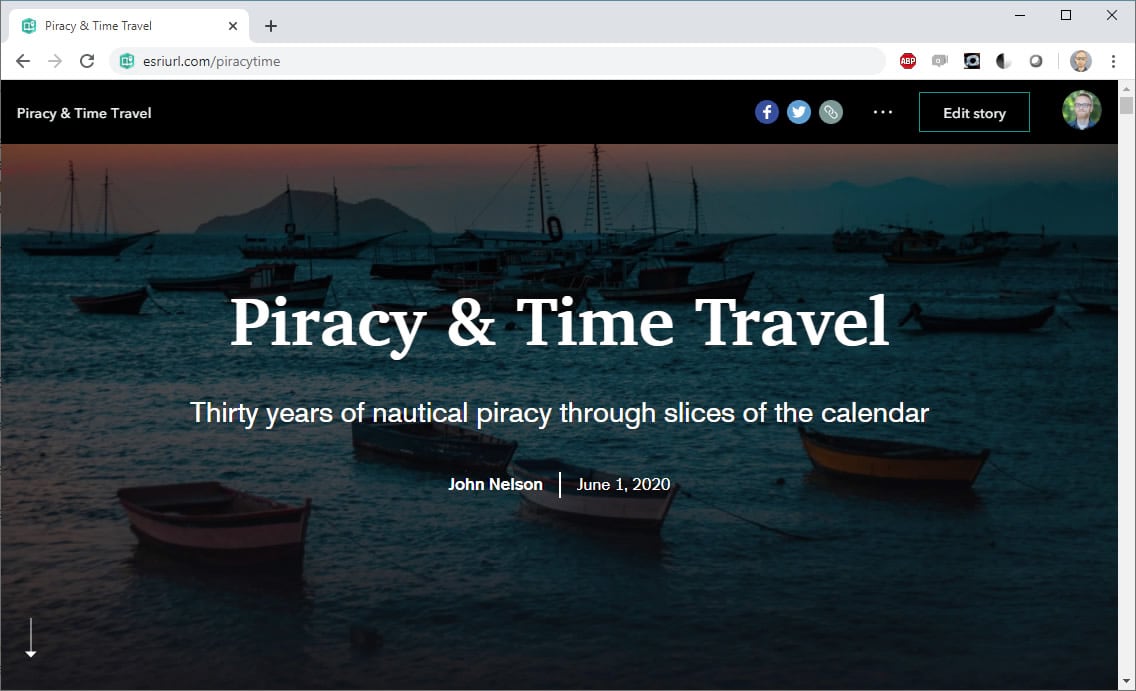 Access this data as an ArcGIS Feed :  ArcGIS Living Atlas of the World

From ESRI by John Nelson, AdventuresInMapping.com

This StoryMap walks through the visual analysis of 30 years of nautical piracy through various cross-sections of the calendar.

The story map presents nautical piracy in place and time, which offers up all sorts of questions.
Questions I don’t know the answer to; but maps don’t necessarily have to answer questions.
Maps prompt new and more specific questions.
Here are a couple extracts from the StoryMap.

First, a linear look at the past three decades…

Thirty years of nautical piracy through slices of the calendar

And here is a seasonal cross-section of this era…

The National Geospatial Intelligence Agency has collected and maintained a record self-reported incidents from the victims of nautical piracy for decades.

In any human-centric collection of data, however unsavory, a time span like this can reveal underlying patterns and trends that echo or illuminate local and global socioeconomic factors.
I'll leave that interpretation to the experts.

I will, however, endeavor to provide visual resources that prompt the sort of questions and commentary that shed light on a living and breathing phenomenon.
The combination of geographic information with time is a powerful coupling...
Where and when are the most intuitive precepts of our everyday job of sorting and make sense of the world around us.
Data that captures these two categories represents an enormous potential to understand the underlying phenomenon it describes.
Data, after all, is just a tiny model of reality.
Each element describes some specific facet of an impossibly complex and interrelated system.
When stepping back and seeing a host of independent elements, a faint picture of reality begins to be painted.
A host of tiny bits converge to reveal some echo of a phenomenon.
Cool, right?
Then you can start asking questions of it...
The best part of data exploration is sliding on those magic sunglasses that reveal structure from within the masses. The query.

Show me this, show me that.
Amazing.
And when time is involved, all sorts of trends and patterns are likely to emerge.
Time just makes sense.
But time isn't just linear...
We live in a world of repeating nested patterns.
Our planet rotates around its axis while it revolves around our sun.
We slice up bits of these patterns and name them things like months and weeks and days.
When sampling these recurring cross-sections from a broad time span, maybe there are patterns that emerge?
We can become time travelers, floating above the word, with rewind, fast-forward, and calendar buttons.
Let's put on some time-travel goggles and take a look at nautical piracy.

Here are nearly eight thousand incidents of piracy reported since 1990.
A quick look shows a handful of especially dense locations...
The Gulf of Guinea, located in the topical waters of the Atlantic Ocean along the central western coast of equatorial Africa, is home to many active offshore petroleum extraction systems, and the urban ports of Ghana, Togo, Benin, Nigeria, Cameroon.
Through the years, piracy has been tightly clustered around these ports.

More distributed, offshore, incidents have occurred around the Niger River delta, home to Port Harcourt.
Shipping lanes passing through the Gulf of Aden, particularly the narrow Bab al-Mandab Strait separating Yemen on the Arabian Peninsula and the countries of Eritrea, Djibouti, and Somalia on the African continent, have seen high instances of piracy.

Piracy is also tightly clustered within the narrow waters of the Singapore Strait, which weaves through the territories of Singapore, Malaysia, and Indonesia.
Taking a look at the three previous decades, we see a stark increase in the 2000s in nearly all regions.
Within our three areas of interest, only Singapore shows appreciable activity in the 1990s.
The waters off the southeastern coast of China, and the South China Sea in genral, have bucked this trend, where piracy was frequent in the 1990s but quite rare in the decades thereafter.
Similarly, reports of piracy around the island of Sri Lanka, off the southeast coast of India, appears to have nearly ceased in the past decade.

Let's take a look at each decade individually, starting with the 1990s...
The 1990s were comparatively quiet.
Incidents globally, and within our areas of interest, are rare and somewhat randomly sprinkled throughout the decade.
The anomalously high rate of incidents in the South China Sea, situated between China to the north, Vietnam to the west, and the Philippines to the west, comes into finer temporal focus here, reveal 1993 to be a banner year for reports of piracy in those waters.

The 2000s are a much different story...
Perhaps most starkly obvious is the punctuated emergence of piracy in the Gulf of Aden in the year 2008—first along the northern shipping lane that passes between Yemen and Somalia, then in the southern shipping lane the following year.
To the south of this Gulf of Aden area of interest, incidents of piracy along the southeastern coast of Somalia, specifically the waters around Mogadishu, show a nascent emergence a few years earlier, in 2005.
These early instances tended to be closer to shore but each following year shows an inclination to venture much further out to sea such that by 2009 the waters east of continental Africa and north of Madagascar were as a vast and active piracy zone.

This increase in reach continued into the following decade...
Through 2010 and 2011, incidents of piracy continue robustly into the high seas east of Africa and deep into the Arabian Sea.
As sharply as these incidents appeared late in the previous decade, they appear to recede beginning in 2012, retracting back to coastal waters and nearly evaporating by 2015.
Similarly, though to a lesser extent, piracy also retracted from the deeper shipping channels extending from Singapore to fewer, more local, incidents.
While global piracy witnessed a precipitous decline during the mid part of the decade, the Gulf of Guinea experienced an expansion in both numbers and distance.
This linear look at piracy provides lots of trends and non-random patterns—so much fodder for an analyst to follow up on, and for those new to this topic to formulate better, more specific questions.

There are clear chronological expansions and contractions, but what about a seasonal look across these thirty years?
Can the month of the year have an influence on where piracy occurs?
Let's take a less linear, more calendar-based, look at the potential seasonality of piracy...
Here is a look at each month of the year, as a cross-section through the decades.
While linear trends of piracy reveal underlying economic forces driving the market of piracy, a seasonal look may reveal cyclical annual patterns.
Twelve frames can be a taxing to track, visually.
If your eyes detect a seasonal wave of activity then I commend your short-term memory's acuity and your generous persistence of vision.

But perhaps a sequence where these months are grouped into their seasons can be easier to visualize. Let's switch our time goggles to a courser resolution.
I'll be referring to seasons from a Northern Hemispherical perspective, but the graphics will retain month names, for clarity...
If there were no seasonality to these decades of piracy, then each seasonal cross-sections would appear equally random.
While less distinct than linear time views, there are, however, some apparent non-random patterns emerging here.
The vast cloud of piracy deep into the waters of the Indian Ocean east of Africa clearly favor Spring and Fall.
A stark two-wave annual pattern of piracy emerges in these transition seasons and breaks back to shore for Winter and Summer.
Piracy in the Gulf of Guinea appears to follow an annual cycle as well.
Summertime is a quieter season with fewer, and more coastal, incidents.
Fall builds up activity into deeper waters and peaks in range and distribution in Wintertime, and finally recedes back to the coast in Springtime.
The Singapore area of interest also shows a mild seasonal fluctuation.
Most notable, perhaps, is the anomalous Wintertime disappearance of piracy around the small Riau Archipelago to the northeast of Singapore, an area rife with piracy in other seasons.
One last observation on seasonality.
The Mediterranean area, which is home to relatively few incidents of piracy, shows a very slight uptick in activity in Summer months.

Are seasonal trends driven intrinsically by the annual cycles of the pirates that carry them out?
Or are they driven by external forces like the business cycles of their target vessels or the seasonal patterns of monsoon seasons that might suppress a pirate's inclination to venture far from shore? Because a large proportion of piracy occurs in the mid latitudes, I expected a somewhat random seasonal pattern.
These fluctuations caught me a bit by surprise and have served to queue up a list of climatic, social, and economic questions.

We all bring preconceived notions to maps, both in their making and their viewing.
Good maps help to wash those away with sometimes surprising clues.
It's important, still, to recognize the biases that we bring to a visualization, and the phenomenon it represents.
Maps don't always have to explain something; sometimes their brightest contribution is to shine a light on new and better questions.

Let's form a tighter time loop and try to identify patterns in the day of the week that incidents of piracy occur.
Is piracy, like any other profession, dependent on the prevailing cultural cycle of the work week—both for those engaging in piracy, and the crews of the vessels they target?
Let's see if we can identify any patterns for this recurring resolution of time...
Piracy is a wholly human endeavor, and humans tend to follow a weekly schedule.
While incidents of piracy show no overall peak or trough throughout the days of the week (the proportion of incidents per day-of-week in almost perfectly flat), there do appear to be some mild fluctuations in the geographic dispersion of these incidents.
Piracy in the Gulf of Guinea tends to cluster closer to the Niger River delta on Wednesdays and Saturdays, while intermediate days show incidents more distributed throughout the gulf.
The northern shipping lane that passes through the Gulf of Aden appears to be targeted more so on Sundays than other days of the week.
These patterns are rather weak, admittedly.

Perhaps the long duration of international shipping journeys spreads the opportunity rather evenly throughout the week so that no particular day presents a target rich environment?
There's an adage in science that goes something like "the absence of data is data."
And, in this case, the absence of strong weekday patterns is also interesting.
Not quite as interesting as a concrete pattern, but still informative and fuel for additional questions. Time, coupled with geography, provides a rich opportunity for the visual exploration of any topic.
As a geographer, the strength of where is foremost in my mind, and it's capacity to surprise and inform in a continued adventure.
But to see a geographic phenomenon de-laminated across time scales, both linear and categorical, is endlessly fascinating and ripe for insights.