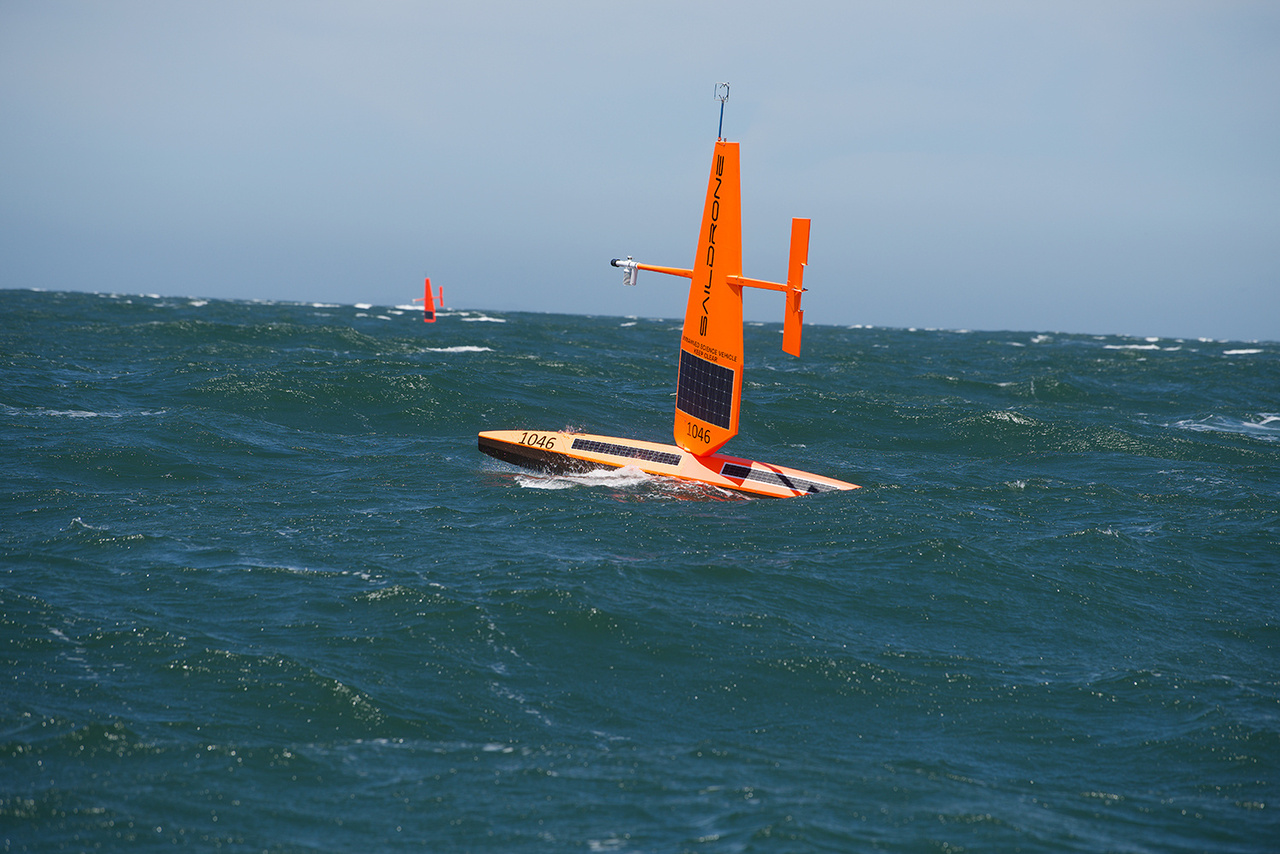 Scientists are capitalizing on existing technological capabilities and partnerships to collect fisheries data.
This will help fill the information gap resulting from the cancellation of FY20 ship-based surveys due to the COVID-19 pandemic.
NOAA Fisheries plans to use autonomous surface vehicles to collect some critically needed data to support management of the nation’s largest commercial fishery for Alaska pollock.

“Extraordinary times require extraordinary measures,” said Alex De Robertis, NOAA Fisheries fisheries biologist and project lead for the Alaska Fisheries Science Center.
“We knew there was a possibility that surveys may be cancelled this year, so we worked on a contingency plan to collect some data just in case.
We were able to capitalize on our previous experience working closely with Saildrone and NOAA Research’s Pacific Marine Environmental Laboratory to get things off the ground quickly.”

This effort supports NOAA’s broader strategy to expand the use of emerging science and technologies including unmanned systems, artificial intelligence, and ‘omics to advance ocean research.
NOAA released its strategy in February.

“The Alaska Fisheries Science Center has been engaged in research and development efforts to test new technologies to both improve our operating efficiencies and enable us to quickly respond when situations like this arise,” said Robert Foy, Alaska Fisheries Science Center Director.
“Providing the best available science to support management decisions is at the heart of our mission to ensure the health of marine ecosystems while supporting sustainable commercial and recreational fisheries and strong local economies.” 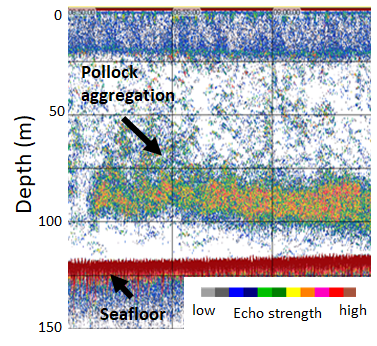 Three saildrones, unmanned wind-powered surface vehicles, are en route.
They are sailing autonomously, from Alameda, California on a six-week journey to the eastern Bering Sea.
They are expected to reach Alaska in early July to begin a 60-day survey.
The ocean-going robots will cover roughly the same area normally covered by standard research vessels to estimate pollock abundance.


Scientists and engineers integrated newly designed low-power sonar instruments, known as echosounders, into the saildrones.
This fishfinder technology detects the presence of fish using sound.
Echosounders send sound pulses into the water and measure how much of this energy echoes back from fish.
From this, scientists are able to make an estimate of the population of fish below.
Scientists from the Alaska Fisheries Science Center worked with Saildrone, the Pacific Marine Environmental Laboratory, and Kongsberg to develop this technology.

The technology is great at detecting fish.
But, it is less effective at differentiating among species and fish sizes.
That is why during standard acoustic-trawl surveys on research vessels, scientists also use a net to collect a sample of fish.
From this, they are able to confirm the species, as well as the weight, length, and sex of individual fish.

Stock assessment scientists use these data together with other data collected from commercial fishing vessels to estimate fish population size each year.

De Robertis and colleagues have spent the past several years testing and validating this technology. They conducted side-by-side comparisons with a NOAA research vessel.
They found that the saildrone-mounted echosounders produced equivalent acoustic measurements of pollock to NOAA’s fisheries survey vessels.

“In this part of the Bering Sea, pollock are by far the dominant midwater fish species.
So, we are confident of getting a useful measure of pollock abundance from the echosounder, even if we can’t directly sample fish.
Acoustic-only measurements from ships are already used to inform fisheries management, and we plan to do the same thing with the saildrones,” said De Robertis.

The saildrones are also equipped with solar-powered instruments to measure oceanographic and meteorological conditions.
Wind, solar radiation, surface temperature, and salinity measurements will be made along the way. 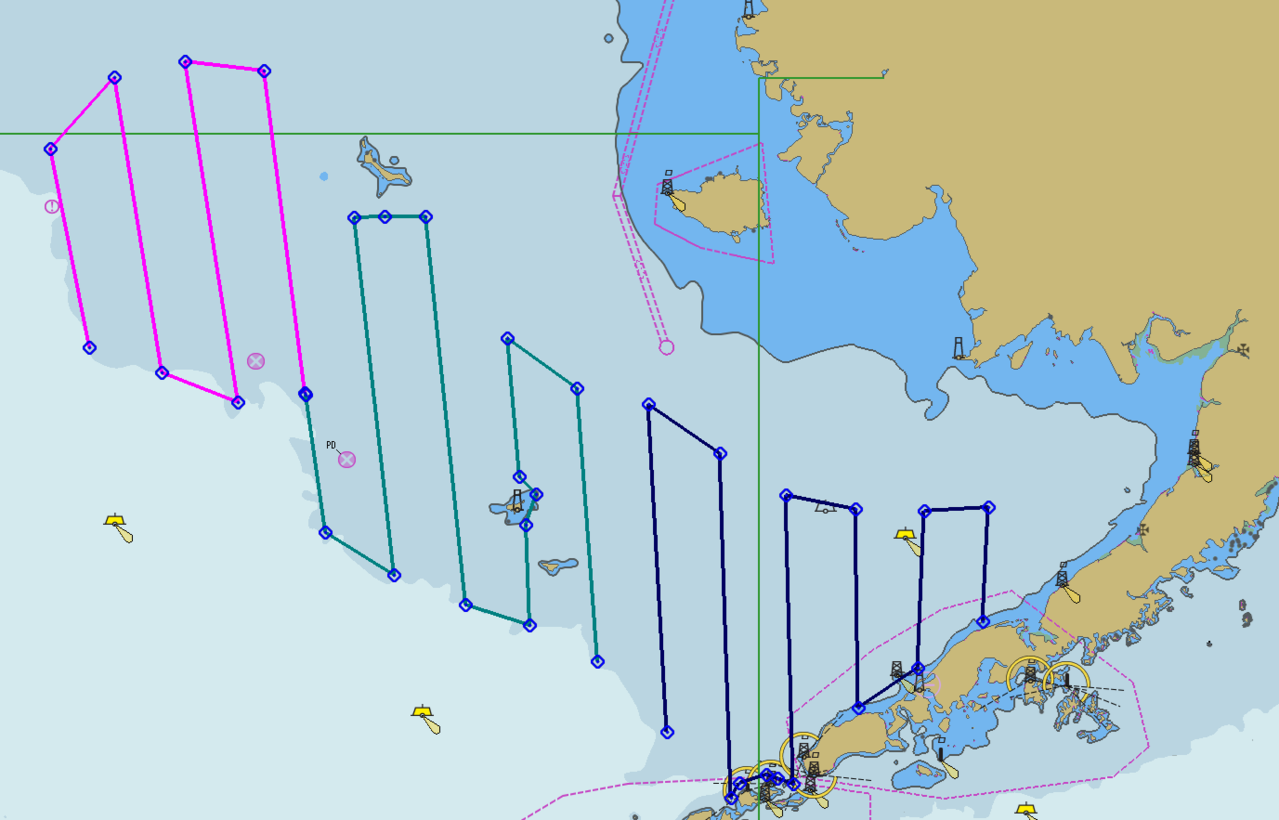 Throughout the survey, compressed summaries of the echosounder data and environmental conditions, and photos will be transmitted to shore via the saildrone’s satellite modem four times per hour.

With the real-time information, De Robertis and colleagues can monitor progress.
Using the satellite link, they will be able to adjust the course of the saildrones, if necessary.

Scientists at the Pacific Marine Environmental Laboratory will process the oceanographic and meteorological data in real time.
“We will make data available to weather forecast centers worldwide via the World Meteorological Organization's Global Telecommunication System so that the observations can be incorporated into weather predictions,” said Eugene Burger, associate director for Information Technology, Pacific Marine Environmental Laboratory.

According to De Robertis what he once perceived as science fiction has become an operational reality.
A lot of progress has been made in just a few short years using unmanned surface vehicles and associated technologies for studying the marine environment.
“If you had asked me six years ago, when I first heard about this, I wouldn’t have thought it possible.
Now, I see it as a valuable tool for augmenting our standard research surveys.”

This is especially relevant this year.
Unmanned vessel surveys are helping scientists provide some key scientific data at a time when it will be difficult to collect the data any other way.