Live map of cruise ships affected now :
Ships with reported cases of coronavirus found on board in 2020

From The Drive by Tyler Rogoway

With the cruise industry on life support, fleets have put to sea for an indefinite stay with many of their crewmen trapped on board.

Of all the industries that have been impacted by the COVID-19 pandemic, the cruise industry has probably been hit the hardest.
Not only are their operations shut down, but they became the face of a global nightmare early on, with hulking pleasure ships being turned into floating prisons rife with infection.
Now, according to satellite imagery and transponder tracking data, with no revenue and nowhere to go, cruise ships are seeking refuge in clusters out in the Caribbean and Atlantic, attempting to ride out a storm that they were never designed to handle.

Storing cruise ships in port is not a cheap proposition, nor is there enough space to accommodate them in traditional berths.
Beyond that, the international crews that man these huge vessels are not allowed to step on land due to infection risk.
With the vast majority of these ships flagged in relatively small and poor countries that have little capability to impact the situation, the only place for them to go is out to sea.
And that's precisely where many of them have been.

The sad flock of cruise ships is spread out loosely in three groups spanning some 30 miles—from one just off the islands, to another roughly ten miles west, to another some 30 miles west.
Check out the satellite photos below to get an idea of just what we are talking about.
Keep in mind that it seems these groups are in constant flux, with the formation and general makeup of the ships in each group changing fairly regularly.

Satellite image of Coco and Great Stirrup Cays taken on May 5th, 2020.
Eight cruise ships are visible off the islands and in port at Coco Cay.

This image, taken on May 2, shows that 10 miles to the west of the islands, another group of cruise ships is located.

This image, taken on May 5, shows that 30 miles west of the islands there is a group of at least eight cruise ships, some of which are the biggest of their kind, sitting idle.

The westernmost group is made up of Carnival cruise ships.
The two other groups are mainly made up of Celebrity and Royal Caribbean cruise liners—Royal Caribbean owns Celebrity.
This is what the locations of the various ships looked like via Marinetraffic.com's satellite transponder data on May 7, 2020:

All the blue dots are cruise ships. 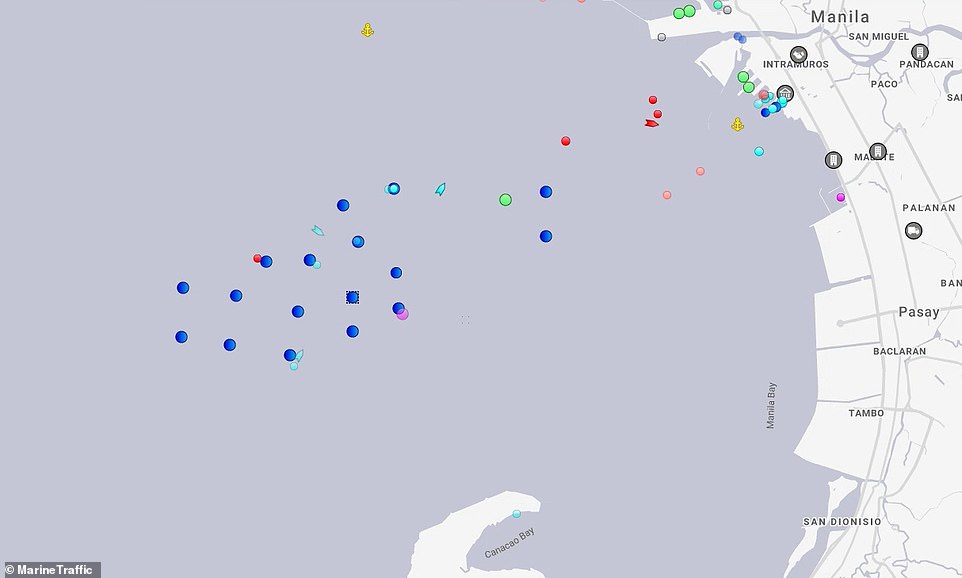 About a dozen cruise liners, such as the Ruby Princess, have been sitting off the coast of the Philippines
When we looked over a broader area, we noticed that there are multiple other little huddles of cruise ships that can be found throughout the Caribbean.
More are anchored just off major embarkation points along the Florida coastline and elsewhere, as well.
Overseas there are similar huddles of ships that spot the map.

In this photo provided by the Philippine Coast Guard, cruise ship MV Ruby Princess, second from left, stays anchored with other ships waiting for clearance from the Bureau of Quarantine before they dock in Manila, Philippines on Thursday, May 7, 2020.
A cruise ship being investigated in Australia for sparking coronavirus infections has sailed into Philippine waters to bring Filipino crewmen home.

Although there are no passengers aboard these ships, some of which cost well over a billion dollars to build, there are plenty of people still on board.
Much of their crews are literally trapped on these vessels.
As the world cut back travel due to COVID-19's explosive spread around the globe and cruise ships became very unwanted guests at long-established ports of call, cruise line workers were trapped at their floating workplaces far from home.

Many of the countries they hail from are not wealthy enough to repatriate them even if they could, so for now, they are stuck in a hellish paradise of sorts on gargantuan pleasure boats that have been banished to the sea—barely moving islands onto themselves.
Meanwhile, they too have loved ones to worry about back home, but have no way of impacting their situations directly.

CNN writes what it is like for crewmen trapped on the vacant luxury liners:

Isolated, denied the swift repatriations offered to passengers and, in some cases, made to endure tough conditions without pay, some of those sequestered at sea have been describing the bureaucratic tangle that has trapped them, often within meters of shore.

"I'm hoping we don't get forgotten about, to be honest," says MaShawn Morton, who works for Princess Cruises.
"It seems like nobody cares what's happening to us out here."

As of May 5, there were over 57,000 crew members still aboard 74 cruise ships in and around US ports and the Bahamas and the Caribbean, according to the US Coast Guard.
Many more hundreds were stuck on vessels elsewhere across the world's oceans.

With no passengers to look after and their quarantines completed, the employees are left wondering why they haven't been allowed home.

American Alex Adkins, a senior stage technician on Freedom of the Seas, a Royal Caribbean ship, has been waiting at sea since mid-March when the vessel's guests were offloaded in Miami.
"Since then, we've had no guests and we've just been floating off the coast of Barbados," he says.


For the first week, the crew took advantage of the Freedom of the Seas' pool and the gym, enjoying facilities empty of guests.
Then, they went into a mandatory two-week self-isolation, says Adkins.

Adkins tells CNN that crew members have since been told that they're no longer considered working employees and they were paid out through the end of April.

CNN's report does note that some repatriation efforts are beginning to take shape, but that exactly how they will play out for all the crewmen on board these ships remains unclear.
The reality is, these big vessels need a sizeable crew onboard to exist, especially without a port to dock in.

On March 13th, due to the quickly unfolding COVID-19 pandemic, the cruise industry shut down all operations.
This was at first supposed to be a 30-day measure, but the Centers for Disease Control and Prevention in the U.S.
subsequently issued a do not sail order that could last for months to come.
As a result, the future of the industry is very much in doubt.

The Disney Wonder cruise ship, right, sits at anchor in front of Celebrity Cruise's Millennium cruise ship, as people pass on the beach Thursday, April 30, 2020, in Coronado, Calif.
The ships are just two of many cruise ships sitting idle along the country's coastline, as the travel industry feels the effects of the battle to slow the spread of the new coronavirus.

Carnival, Royal Caribbean, and others say they will start operating again this summer, while Norwegian now says the entire industry might not survive, at least in the form it once was.
It isn't clear how restarting cruise operations would be possible with the virus still widely circulating.
These ships become huge liabilities during an outbreak and end up being geopolitical footballs that nobody really wants to touch.
There is also the factor of direct legal liability for operators that are embarking passengers that could potentially die from a disease that has proven to be very hard if not impossible to contain aboard once it rears its ugly head.

So, as you can see, the viability of the cruise industry and the massive ships—big moneymakers during the best of times, but huge money pits when cruisers are not on board—is far from certain.
It is hard to imagine what would happen to all of these ships, some of which are modern marvels, if they simply had no demand for their services on the horizon.
Few industries exist where such huge capital outlays can turn into equally large liabilities under these highly unique circumstances.
Whereas air travel and hotels, both industries that are in great jeopardy, still serve a necessary service during a pandemic and during the economic recovery that hopefully follows, these decadent and hulking ships serve no purpose other than entertainment.

More than 800 cases of laboratory-confirmed COVID-19 cases occurred during outbreaks on three cruise ship voyages, and cases linked to several additional cruises have been reported across the United States, the CDC found.
U.S. CENTERS FOR DISEASE CONTROL AND PREVENTION

The Covid-19 Cruise Tracker is tracking in real-time all the cruise liners currently stranded outside ports around the world.

So, unless the COVID-19 situation takes a miraculous turn for the better, it's hard to imagine a set of circumstances where throngs of cruise ships aren't left out to sea.