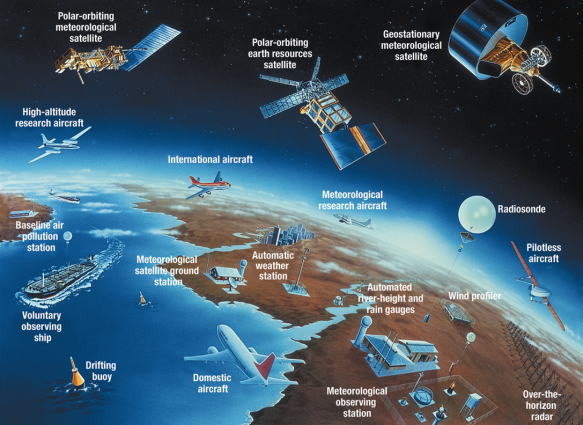 The amount of atmospheric data routinely gathered by commercial airliners has dropped sharply as a result of the coronavirus, the World Meteorological Organization announced.

The drop in airline travel caused by the coronavirus pandemic has sharply reduced the amount of atmospheric data routinely gathered by commercial airliners, the World Meteorological Organization said Thursday, adding that it was “concerned about the increasing impact” on weather forecasts worldwide.

The agency said data on temperature, wind and humidity from airplane flights, collected by sensors on the planes and transmitted in real time to forecasting organizations around the world, has been cut by nearly 90 percent in some regions. In the United States, airlines are operating skeletal schedules and have opted to store much of their fleets rather than continuing to lose money by flying near-empty planes.
(Nick Oxford/Reuters)

In the United States data declined by 75 percent  during the pandemic, according to the National Oceanic and Atmospheric Administration.
Under the observational program, established in the 1960s, data from 3,500 aircraft operated by Delta, United, American and Southwest, and by the cargo carriers United Parcel Service and FedEx, is transmitted directly to National Weather Service forecasting operations.

Christopher Vaccaro, a NOAA spokesman, said the decline “does not necessarily translate into a reduction in forecast accuracy since National Weather Service meteorologists use an entire suite of observations and guidance to produce an actual forecast.”
That includes data from satellites, radar and other land- and sea-based instruments and radiosondes, small instruments that are launched into the upper atmosphere on a daily schedule and provide data as they descend. Aviation-derived weather observations on May 3-4, via the AMDAR network. (WMO)

But fewer than 200 radiosondes are launched each day.
Observations from aircraft have been far more abundant, said William R.
Moninger, a retired NOAA physicist who now works at the Cooperative Institute for Research in Environmental Sciences at the University of Colorado.
Not every airplane supplies data, but those that do transmit readings as often as every few seconds, depending on altitude, he said.

At this time last year, Dr. Moninger said, aircraft in the United States provided nearly 600,000 observations a day.
Now, with far fewer flights, on a recent day in April there were 180,000 observations, he said.

The observational data is fed into weather service computer models that forecast conditions anywhere from several hours to days ahead.
Dr. Moninger and some colleagues are currently studying whether short-term forecasts have been affected.
“The short answer is we haven’t seen an unequivocal impact yet,” he said, noting they have yet to complete their analysis. The World Meteorological Organization, an arm of the United Nations that coordinates a global observing system for 193 member nations, said that in addition to aircraft data, surface-based weather observations have been affected in some parts of the world, including Africa and Central and South America, where many weather instruments are not automated and must be visited regularly to obtain readings.

The agency said that automated instruments should continue to function well for some time, but that if the pandemic is prolonged, lack of maintenance and repair may become a problem.

Sign up to receive an email when we publish a new story about the coronavirus outbreak.
The agency also said some countries, especially in Europe, were launching more radiosondes to partially make up for the loss of aircraft data.

National weather agencies “are facing increasingly severe challenges as a result of the coronavirus pandemic, especially in developing countries,” said Petteri Taalas, the agency’s director-general, in a statement.

“As we approach the Atlantic hurricane season, the Covid-19 pandemic poses an additional challenge, and may exacerbate multi-hazard risks at a single country level,” he added.

The aircraft data is also used by airlines as they manage daily flight operations both in the air and at airports.
Observations of wind speeds at cruising altitudes of about 30,000 feet and higher, for example, can help plan for refueling needs.  And if observations during ascent or descent show that it is likely that icing conditions may soon occur at an airport, an airline can save money by moving some aircraft elsewhere.

The data can sometimes be a lifesaver.
In a 2003 paper, Dr. Moninger and others wrote about a 1998 incident in which a plane nearing Miami on a flight from Europe radioed that it was nearly out of fuel because it had encountered strong headwinds.
A quick check of data from three other aircraft showed an alternative track, not far away, with calmer air.

For weather service forecasting, observations during take off and landings are especially useful, Dr.
Moninger said.
Data is collected more frequently than at cruising altitude: advanced instruments take readings every 300 feet between the ground and 10,000 feet.
The resulting collection of readings is called a profile and typically there would be about 12,000 of them a day.
On March 23 this year, there were 3,500.

The data can help forecasters better understand the vertical structure of the lower atmosphere and how it may change in the near term.
“If you’re looking for things like the likelihood of thunderstorms, the vertical structure of the atmosphere is important,” Dr. Moninger said.
“I expect the decrease in weather data could also make a big impact on things like predicting when fog is going to break,” he said.

Air-quality experts also use the data to forecast because it can help predict the appearance of near-surface inversions, when air temperatures, which are normally warmest at the ground, flip and become warmer at higher altitudes.
Inversions trap pollutants, greatly worsening air quality for up to a day or longer.