How to survive 75 hours alone in the ocean 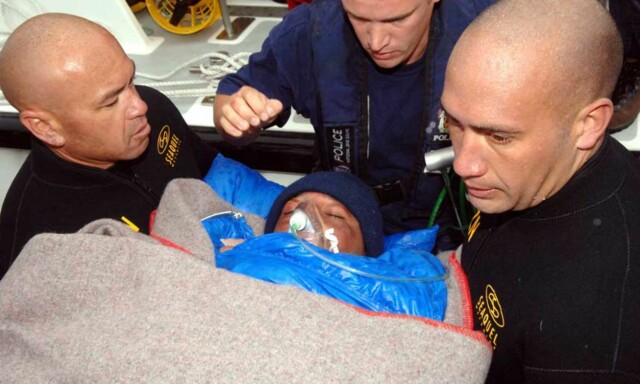 From GetPocket by Alex Hutchinson

A case study digs into the medical records of a lost diver’s incredible survival story.

In February 2006, Robert Hewitt was scuba diving near Mana Island, off the coast of New Zealand’s North Island.
Hewitt was an experienced navy diving instructor with 20 years in the service, and he told his dive buddy that he would swim back to shore himself.
Instead, when he next surfaced, he had been pulled several hundred meters away by a strong current.
The dive boat had moved on, and Hewitt was left alone, the tide pushing him farther and farther from shore.

In a 2017 issue of the journal Diving and Hyperbaric Medicine, a team of researchers led by physiologist Heather Massey of the University of Portsmouth in the UK take a closer look at what happened next: Hewitt’s progressive deterioration over the next four days and three nights, how he survived, and what took place after his eventual rescue.
It’s an interesting glimpse at a branch of extreme physiology that most of us hope we’ll never encounter.

The most pressing challenge facing Hewitt was the water temperature of 61 to 63 degrees Fahrenheit (16 to 17 degrees Celsius), well below body temperature.
According to physiological models, when water is 59 degrees Fahrenheit (15 degrees Celsius), the median survival time is between 4.8 and 7.7 hours.
Amazingly, Hewitt spent the next 75 hours in the water, drifting back and forth over a distance of nearly 40 miles before he was spotted by Navy diving friends and rescued.

In general, immersion in cold water produces a four-stage response.
First is the “cold shock response” that triggers “an inspiratory gasp, uncontrollable hyperventilation, hypertension, and increased cardiac workload.” If you’re not ready for it, this shock response can cause you to inhale water and drown and can set off heart arrhythmias.
Hewitt had two key defenses against the cold shock: a five-millimeter custom-fit wetsuit and habituation from more than 1,000 previous dives, which eventually blunts the initial shock response.

After the cold shock, which peaks within 30 seconds and diminishes after a few minutes, the next stage of immersion is peripheral muscle cooling.
For every 1.8 degrees Fahrenheit (1 degree Celsius) that your muscles cool, your maximum muscle power drops by about 3 percent.
That means you can lose the ability to swim before your core actually gets hypothermic.
Hewitt did indeed lose the ability to swim at some points during his ordeal—sometimes because he lost consciousness—but he had a buoyancy compensator that kept him floating with his head above water.

The third stage is deep body cooling, which affects both physical and mental function and eventually results in loss of consciousness and then death.
No one took Hewitt’s temperature until he had been wrapped in blankets and received warm drinks after his rescue.
At that point, it was 96.3 degrees Fahrenheit (35.7 degrees Celsius), which isn’t particularly low.
He did have some episodes of confusion and disorientation that suggest he was on the border of hypothermia, but it’s hard to be sure.

One key factor that helped stave off hypothermia was the fact that Hewitt is (in the words of the researchers) “a large, muscular male”; at 5'11" and 220 pounds, he clearly had a decent amount of insulation.
In fact, for every 1 percent increase in body fat, you slow your rate of heat loss by 0.18 degrees Fahrenheit (0.1 degree Celsius) per hour—a big deal when you extrapolate to 75 hours.
Hewitt also tried to maintain the fetal position, which minimizes heat loss and extends survival time in cool water.

The fourth and final stage of immersion, if you make it that far, is the “circum-rescue” phase.
It’s apparently quite common for people to collapse during rescue, thanks in part to the change in pressure when you leave the water and the strong nervous system reaction to the idea of being rescued.
With this in mind, Hewitt’s rescuers kept him horizontal to maintain blood flow to the brain and gave him “verbal encouragement” to keep fighting for his life.

Of course, cold water wasn’t the only challenge in play.
Despite water, water, everywhere, dehydration is a serious problem—in fact, the squeeze of the wetsuit and water pressure shunt blood to your core, which stimulates urination, even when you’re already dehydrated.
The practical guidance in situations like this is that you should avoid drinking for the first day; this will trigger hormone changes that make your body start conserving water.
After that, aim to scrounge up half a liter per day.
Hewitt used his mask and wetsuit jacket to collect rainwater, but this was far below his needs.
When he was rescued, he drank a liter and a half of water, then received another six liters intravenously.

Prolonged soaking in seawater, along with the friction from his wetsuit and fins, damaged Hewitt’s skin pretty badly.
When found (put your spoon down for a moment), “his body was covered with sea lice feeding on his macerated skin.” And then there’s the psychological challenge, both during and after the ordeal.
By the third day, he was contemplating (and half-heartedly attempting) suicide, but he managed to keep fighting.

Can we extract any lessons from Hewitt’s ordeal? Well, wearing a wetsuit and weighing more than 200 pounds obviously helped, but those aren’t particularly useful takeaways.
Staying in the fetal position—sometimes known as the “heat escape lessening posture,” or HELP—was a good idea.
Ultimately, the most pointed lesson, and the one Hewitt himself now spreads as a water safety advocate, is that he shouldn’t have been in that situation in the first place.
Rather than diving alone, he should have aborted the dive and joined another group or, at the very least, used a surface-marker buoy to flag his position.
“In some ways, Rob almost contributed to his own demise,” the police search team leader said bluntly.
“He took some shortcuts.”

Still, shit sometimes happens.
And if it does, the other big lesson to keep in mind is that in defiance of all the physiological models, Rob Hewitt survived for an astounding 75 hours alone in the cold water.
If you find yourself out there, don’t give up.