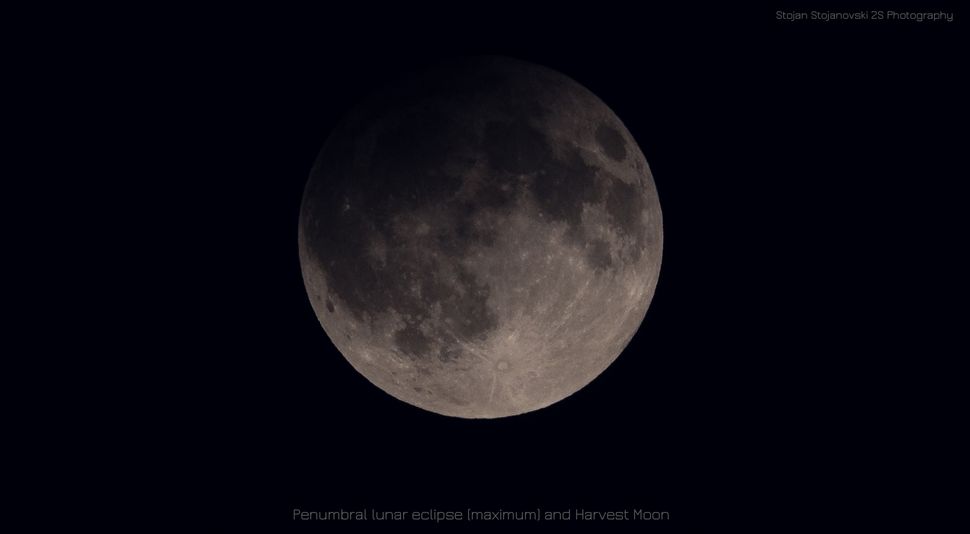 From Space by Doris Elin Urrutia

Four lunar eclipses will appear across Earth's skies in 2020.
They will all be penumbral eclipses, which means the face of the moon will appear to turn a darker silver color for a few hours.
Weather permitting, people across most locations on our planet will catch at least one of the lunar eclipses falling on Jan. 10-11, June 5-6, July 4-5 and Nov. 29-30.

There's always a place on Earth where the sun don't shine.
In the space above the planet's night side is Earth's cone-shaped shadow.
It's impossible to see most of the time, but when the moon passes through part of the shadow, its existence becomes apparent.

There are two parts to Earth's shadow, creating three possibilities for a lunar eclipse.
Earth's atmosphere bends sunlight, so the planet doesn't cast a jet-black shadow.
So, if the whole moon passes through the innermost part of Earth's shadow, we see a copper-colored lunar face.
This is known as a total lunar eclipse, or a "blood moon."

The first lunar eclipse on Jan. 10-11 will be best viewed from Africa, Europe, Asia and Western Australia, according to NASA.
The moon will undergo its deepest entry into Earth's penumbral shadow when these continents experience nighttime.
The eclipse begins at 12:07 p.m. EST (1707 GMT) and will last for 4 hours, 4 minutes and 34 seconds.
To find out whether you will be able to see this eclipse from your location, check out this interactive map from timeanddate.com.

In Johannesburg, South Africa, the penumbral lunar eclipse starts at 7:07 p.m. local time on Friday, Jan. 10.
The moon will be close to the horizon, according to timeanddate.com.
The maximum eclipse occurs a couple hours later, at 9:10 p.m.; then at 11:12 p.m., the eclipse ends.
There may be storms that night, so viewing conditions aren't ideal for eclipse observations.

In Jakarta, Indonesia, the penumbral lunar eclipse begins in the early hours of Saturday, Jan. 11.
The event begins at 12:07 a.m. local time, reaches maximum eclipse at 2:10 a.m. and ends at 4:12 a.m. — but like Johannesburg, cloudy conditions may obstruct the view. 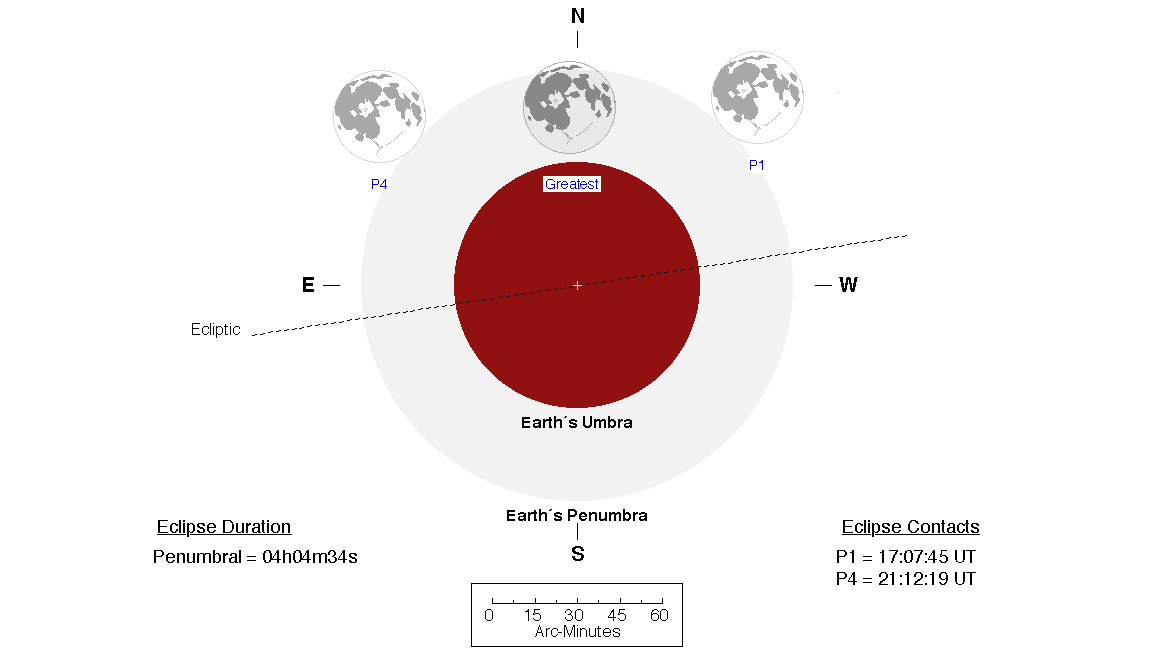 This diagram from astronomer Fred Espenak illustrates the moon's path through the outer part of Earth's shadow on Jan. 10-11, 2020.
The red dot is Earth's umbra, which the moon will not pass through during any of the 2020 lunar eclipses.
(Image credit: Fred Espenak/NASA)

The next lunar eclipse, on June 5-6, will be visible to more areas in the Southern Hemisphere.
Africa, Australia and Central and Southern Asia will get to view this lunar eclipse in its entirety, and the east coast of South America will witness the end of the eclipse at moonrise.
During this event, the moon will dip just about half of its face into Earth's penumbral shadow, beginning at 1:45 p.m. EST (1845 GMT).
This eclipse will last for 3 hours, 18 minutes and 13 seconds, according to NASA. 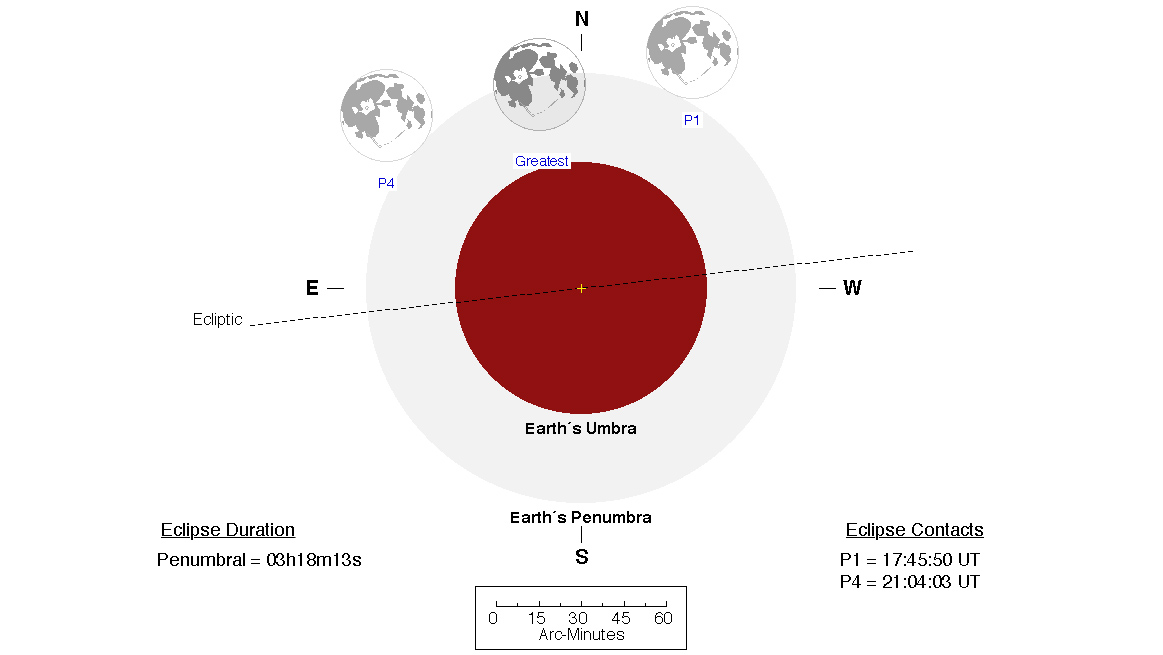 This diagram from astronomer Fred Espenak shows the moon's path through the other part of Earth's shadow on June 5-6, 2020.
(Image credit: Fred Espenak/NASA)

From Sydney, Australia, the eclipse can be viewed in the predawn hours of Saturday, June 6.
The event begins there at 3:45 a.m. local time, reaches maximum eclipse at 5:24 a.m. and wraps up at 7:04 a.m., which will be just 5 minutes after moonset.

The opposite will happen over the skies of Lagos, Nigeria.
The inhabitants of the city will be just starting their evening when Sydney is ending its night.
The lunar eclipse over Lagos will become visible when the moon rises at 6:53 p.m. local time, but it will have actually started 8 minutes before.
The penumbral lunar eclipse will reach its maximum at 8:24 p.m., and the eclipse ends at 10:04 p.m.

North and South America get the best view of the July 4-5 lunar eclipse.
People in the westernmost parts of Africa and Europe will also view the event.

New York City will end U.S. Independence Day (July 4) with the penumbral lunar eclipse.
Starting at 11:07 p.m. local time, the moon will begin to slide into Earth's outer shadow.
At eclipse maximum (12:29 a.m. on Sunday, July 5), no more than half of the moon's face will take on a darker shade.
About an hour and a half after maximum, at 1:52 a.m., the event ends.
The entire eclipse will last 2 hours and 45 minutes. 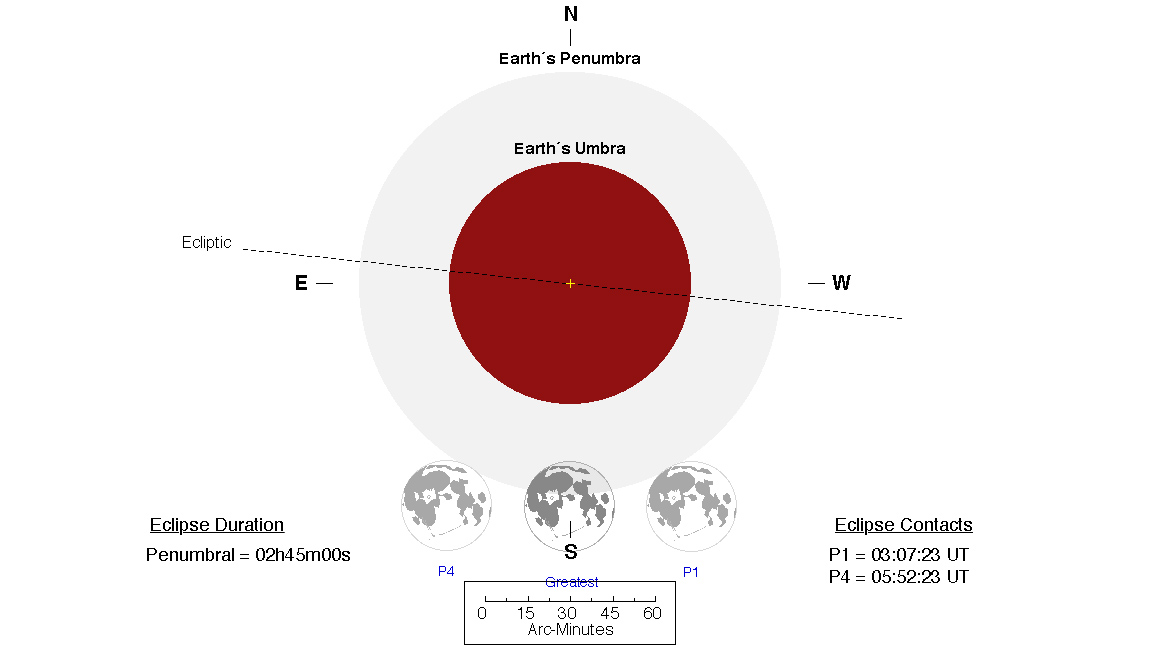 This diagram from astronomer Fred Espenak shows the moon's path through the outer part of Earth's shadow on July 4-5, 2020.
(Image credit: Fred Espenak/NASA)

In Lisbon, Portugal, the moon first makes contact with Earth's shadow at 4:07 a.m. local time on Sunday, July 5.
The early morning event reaches its maximum at 5:29 a.m. and wraps up at 6:52 a.m., which is 34 minutes after the moon sets below the Portuguese horizon.
Viewing conditions are likely to be clear at that time of year.

In the coastal city of Lima, Peru, the moon will make first contact with Earth's penumbral shadow at 2:32 a.m. local time on Monday (Nov. 30). Most of the moon's face will enter the shadow, and the eclipse will reach its maximum a couple hours later at 4:42 a.m.
If viewing conditions are good (history indicates the day will probably be cloudy), spectators can enjoy the lunar eclipse for another hour, until the moon sets at 5:40 a.m.
The lunar eclipse wraps up at 6:53 a.m. local time. 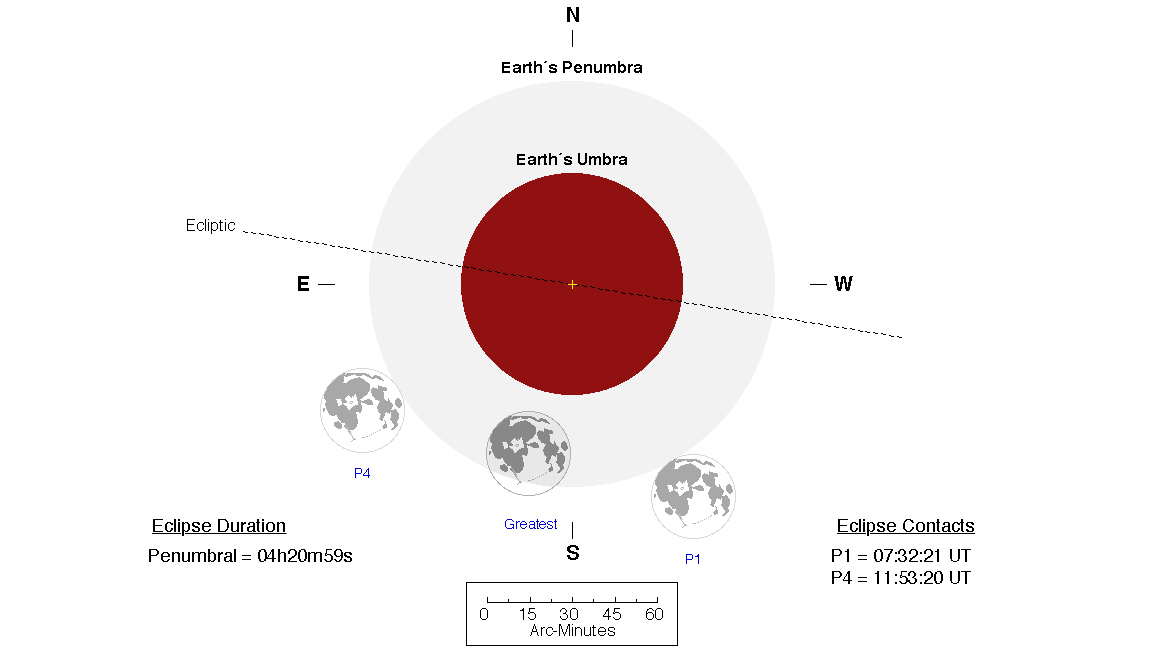 This diagram from astronomer Fred Espenak shows the moon's path through the outer part of Earth's shadow on Nov. 29-30, 2020.
(Image credit: Fred Espenak/NASA)

On the flip side, viewers across the Pacific and the Philippines will see a lunar eclipse already in progress when the moon rises above the horizon.
At 3:32 p.m. local time in Manila on Monday, Nov. 30, the lunar eclipse begins.
This is before moonrise; folks will first view the event at 5:23 p.m., and it reaches its maximum at 5:42 p.m.
The eclipse wraps up at 7:53 p.m.