Inside the Arctic Circle, Golden Hour has nothing on Golden Day 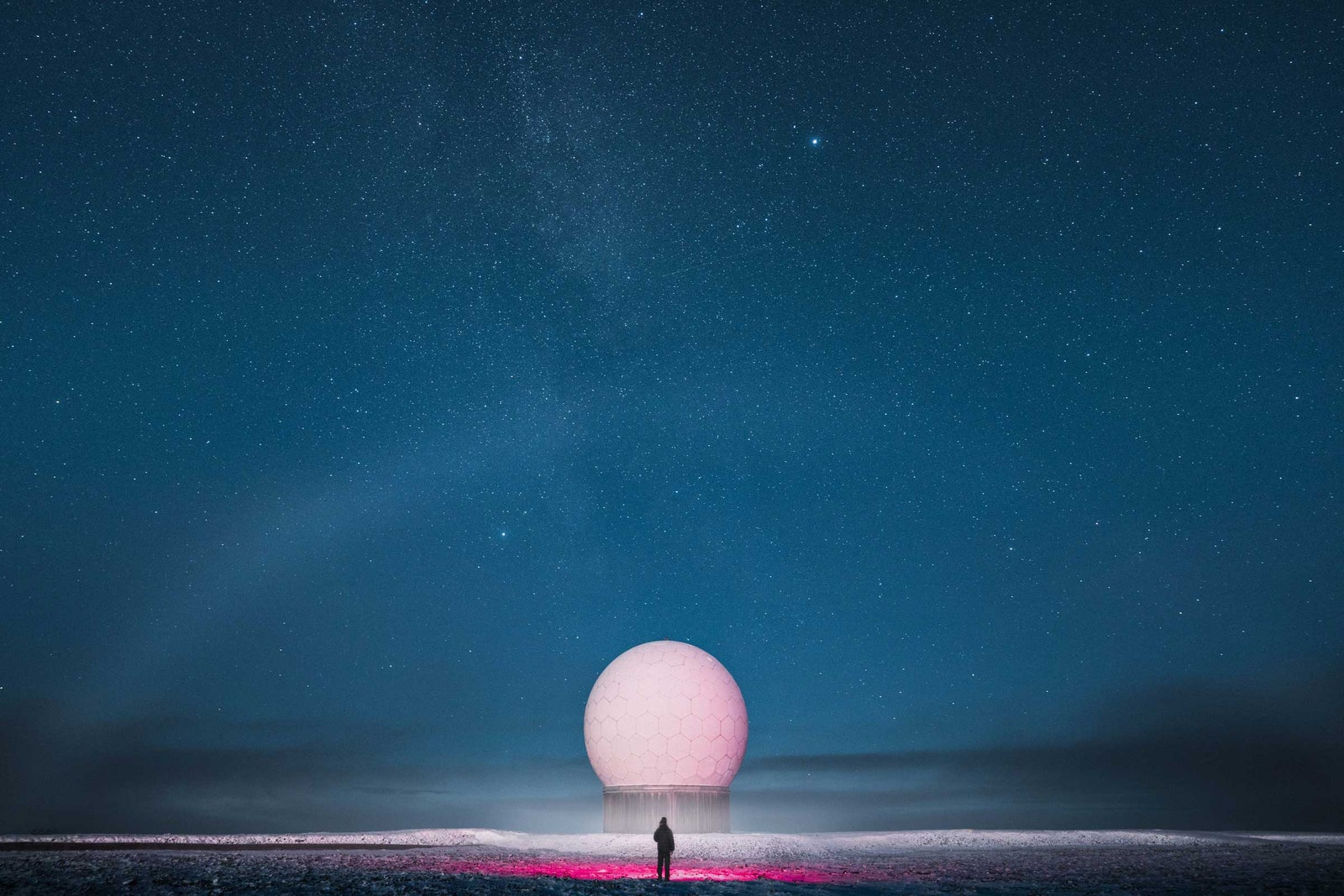 This self-portrait depicts Wu standing before one of the domes at the Svalbard Satellite Station.
A fogbow arcs above the dome, and Wu's headlamp casts an eerie pink light on the ground.

When photographer Reuben Wu visited the Svalbard Satellite Station in Norway, the sun never strayed far from the horizon.

The light in Reuben Wu’s Love is Metaphysical Gravity, shot at the Svalbard Satellite Station in Norway, is breathtaking.
Everything—the data center, its geodesic domes and the snowy landscape surrounding them—drips with exquisite shades of pink, purple and gold.
You might assume it's because Wu shot the images at golden hour, that magical time just after sunrise and before sunset when the sun is low on the horizon, turning the light soft and warm.
And you’d almost be right.
“It wasn’t ‘golden hour,’” Wu says.
“It was golden day.”
The Svalbard Satellite Station sits inside the Arctic Circle at 78 degrees north—just 745 miles from the North Pole.
That makes for some unusual light phenomena; the sun doesn’t set in summer or rise in winter.
When Wu visited with his Sony AR7II in October, it mostly kissed the horizon in a shallow arc.
"It was like a perpetual sunset all day, from about 9am to about 6pm," Wu says.
Wu pays special attention to light in his work, though he’s typically too impatient to sit around waiting for Mother Nature to make things look nice. 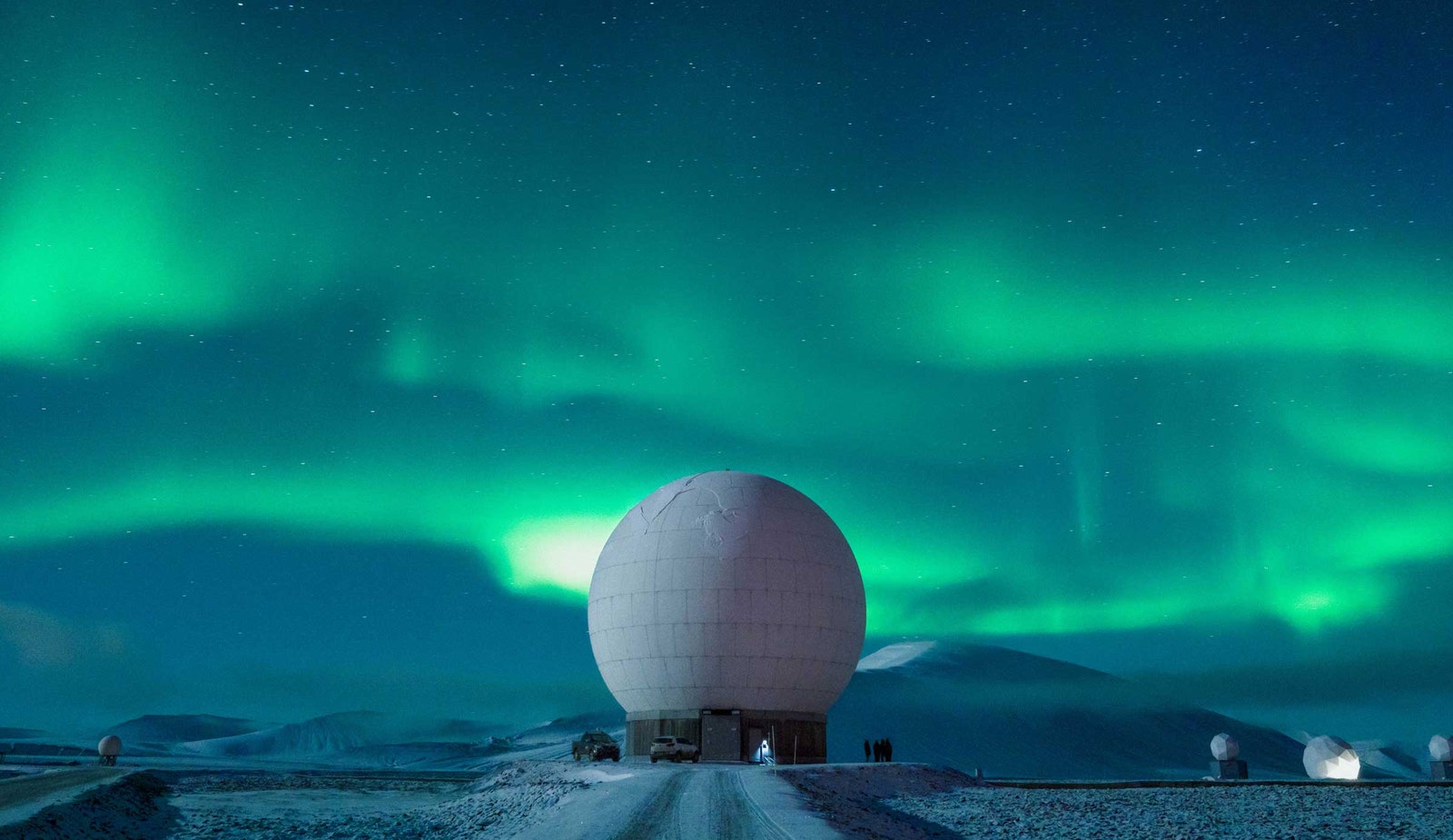 The Northern Lights shine above SG-22, one of two domes that help track the JPSS-1satellite.
Wu took this image as part of a timelapse, and he appears in the image standing with his guides beside the dome.

For his previous series, Lux Noctis, he strapped LEDs to a drone to illuminate desert landscapes in the US at night.
“Light is a way I’m able to produce a mood or atmosphere that presents the landscape in a new way," he says.
This quest for unconventional landscapes sent him to the Svalbard Satellite Station, jointly owned by the Norwegian government and the company Kongsberg Defense and Aerospace.
The ground station is the largest of its kind in the world, with 40 antennas tracking more than 80 satellites as they orbit the poles 14 times a day.
The antennas sit inside plastic, geodesic radomes of varying sizes.
“The whole place is like an ode to Buckminster Fuller,” Wu says.
Wu has been wanting to shoot the ground station since he missed it on his first trip to the Norwegian archipelago in 2011.
He decided to go for it last year, after reading that NASA and the National Oceanic and Atmospheric Administration would soon launch a new weather satellite to be tracked by radomes at the station (more on that here).
He got in touch with Raytheon, the space and defense company running the monitoring, as well as Kongsberg Satellite Services, which runs the facility.
They gave him special permission to document the closed-off site.
He spent three days in Svalbard wandering the dreamy expanse of radomes, their shapes mirrored by the ghost of the rising moon.
Inside the domes—cold, echoey chambers that were empty save for the antennas and puddles of snow—he set up LED lights to add an element of drama and mystery.
But outside, he didn’t have to.
The sun threw the domes into relief, sometimes casting their shadows onto the fog beyond.
At night, the golden day gave way to spectacular northern lights.
As surreal as the dome-dotted landscape looks, it’s the light—so beautifully captured by Wu—that makes it all truly stunning.
Posted by geogarage at 1:09 AM