Subversive, queer and terrifyingly relevant: six reasons why Moby-Dick is the novel for our times

The book features gay marriage, hits out at slavery and imperialism and predicts the climate crisis – 200 years after the birth of its author, Herman Melville, it has never been more important

Thursday marks the 200th birthday of Herman Melville – the author of the greatest unread novel in the English language.
I’ve lost count of the number of times I’ve seen eyes glaze over when I ask people if they have conquered Moby-Dick.
It is the Mount Everest of literature: huge and apparently insurmountable, its snowy peak as elusive as the tail of the great white whale himself.

Having grown up loving whales as a boy – in the era of the Save the Whale campaigns of the 1970s – I was underwhelmed when I watched John Huston’s grandiose 1956 film, Moby Dick.
Perhaps it was because I saw it on a tiny black-and-white TV, but the whole story seemed impenetrable to me.
And there weren’t enough whales.
I would have been even less keen had I known that the whale footage Huston did include had been specially shot off Madeira, where they were still being hunted.
For the Hemingwayesque director, there was none of that final-credit nonsense: “No animals were harmed in the making of this film.” Because they very much were.

Forty years later, I saw my first whales in the wild, off Provincetown, a former whaling port on Cape Cod, Massachusetts.
It was there, in New England, that I finally finished the book.
What had seemed to be a heroic tale of the high seas proved to be something much darker and more sublime.
I realised its secret.
Not only is it very funny and very subversive, but it maps out the modern world as if Melville had lived his life in the future and was only waiting for us to catch up.
I fell in love with Melville as much as I had fallen in love with the whales.
My own five-year-long voyage searching for these magnificent creatures produced my own book, Leviathan or, The Whale and a subsequent film, The Hunt for Moby-Dick.
But even now, having read it a dozen times, I’m still not sure I can tell you what Moby-Dick is all about.
Yes, it’s the tale of Captain Ahab, who sails his ship, the Pequod, in search of a white whale that had bitten off his leg.
But it’s also a wildly digressive attempt to comprehend the animals themselves.
And despite the author’s rather unhelpful conclusion, after 650 pages, about the whale, “I know him not, and never will”, here are some very good reasons why you need to read his crazily wonderful book. 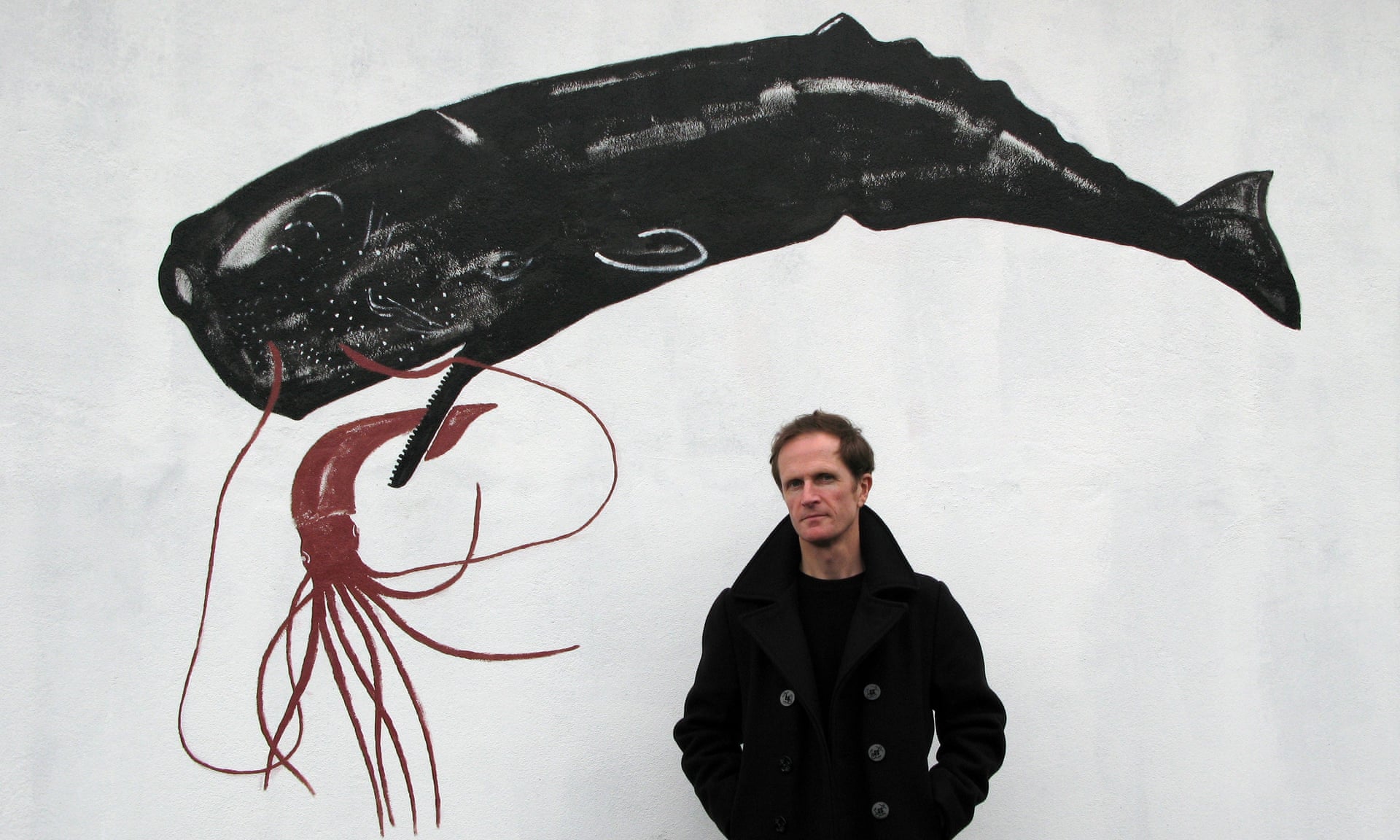 It is adored by the great and the good

It is precisely Moby-Dick’s forbidding reputation that has inspired artists, writers, performers and film-makers from Frank Stella to Jackson Pollock, Led Zeppelin to Laurie Anderson, Orson Welles, Sylvia Plath, Stanley Kubrick and Lynne Ramsay, as well as the makers of Tom and Jerry, and even The Simpsons.
The musician Moby claims direct descent from Melville (although he admitted to me that he wasn’t so sure it was true at all).
There are many who hold it as one of their favourite books: Barack Obama, Joyce Carol Oates, Patti Smith, Nile Rodgers and Bob Dylan (who cribbed it for his Nobel speech), among them.

It has never been more relevant

It’s a tribute to Melville’s imagination that his book remains so strongly in ours.
He may have done for the whale what Peter Benchley’s Jaws did for the shark – recreating the animal as an icon of otherness.
He invests cetaceans with their own intrinsic beauty and in doing so, he pre-empted our conception of animals we know to be highly sentient and entirely matriarchal, expressing their own culture through their sonar clicks.

Equally, Melville’s reflections on our own species still reverberate.
Days after 9/11, the Palestinian-American writer Edward Said compared George W Bush’s pursuit of Osama bin Laden to Ahab’s obsessive hunt for the white whale.
The current tenant of the White House draws comparisons to Ahab’s crazed mission, too: Trump’s desire for a wall – an “unnecessary and expensive …vengeful folly”, according to Neil Steinberg in the Chicago Sun Times – is as irrational a pursuit as Ahab’s.

You might apply similar metaphors to the head of our own shaky ship of state.
When the prime minister’s cabinet was announced last week, I couldn’t help but think of Melville’s line: “Such a crew, so officered, seemed specially picked and packed by some infernal fatality to help him to his monomaniac revenge.”

But it is Moby-Dick’s premonitory brilliance that continues to make it relevant.
Melville predicts mass extinction and climate breakdown, and foresees a drowned planet from which the whale would “spout his frothed defiance to the skies”.
And in its worldwide pursuit of a finite resource, the whaling industry is an augury of our globalised state.
It’s no coincidence that the Pequod’s first mate, Starbuck, gave his name to a chain of coffee shops.

Moby-Dick may be the first work of western fiction to feature a same-sex marriage: Ishmael, the loner narrator (famous for the most ambiguous opening line in literature) gets hitched – in bed – to the omni-tattooed Pacific islander, Queequeg: “He pressed his forehead against mine, clasped me round the waist, and said that henceforth we were married.”
Other scenes are deeply homoerotic: sailors massage each others’ hands in a tub of sperm oil and there is an entire chapter devoted to foreskins (albeit of the whalish variety).


Indeed, the whole book is a love letter (sadly unreciprocated) from a besotted Melville to his hero, Nathaniel Hawthorne, to whom he wrote: “You have sunk your northern roots down into my southern soul.”

Faced with such unbridled flagrancy, the US establishment has never been keen to accept the idea that Melville may just possibly have been gay.
And it must have rankled to have the brilliance of his book pointed out to them by a bunch of British queer writers.
When a modest Everyman edition appeared in London 20 years after Melville’s death in 1891, DH Lawrence declared it a work of futurism before futurism had been invented; EM Forster and WH Auden extolled its queer nature.
Virginia Woolf read it three times, comparing it to Wuthering Heights in its strangeness, and noted in her 1926 diary that no biographer would believe her work was inspired by the vision of “a fin rising on a wide blank sea”.

It is genuinely subversive

The alluring figure of Queequeg is one of the first persons of colour in western fiction, and the Pequod carries a multicultural crew of Native Americans, African Americans and Asians (evocatively reflected in the paintings of the contemporary black American artist Ellen Gallagher).
It is a metaphor for a new republic already falling apart, with the pursuit of the white whale as a bitter analogy for the slave-owning states.
It is why, in 1952, the Trinidadian writer CLR James called Moby-Dick “the greatest portrayal of despair in literature”, seeing an indictment of imperialism in Ahab’s desire for revenge on the whale.
(In fact, Melville hints it wasn’t only his leg that was bitten off.
As Cerys Matthews asked me: “Shouldn’t it be called Moby-no-Dick?”)

Melville was born in Manhattan on 1 August 1819, in sight of the sea.
As a failed teacher, he signed up for a whaling voyage in New Bedford – then the richest city in the US, wealthy on the oil of whales.
He deserted the ship a year later, but on his return to the US became a glamorous figure, acclaimed for his sensual books about the “exotic” inhabitants of the Marquesas islands.
But by 1849, his output had become increasingly obscure, and that October, he arrived in London, seeking inspiration.
Installed in lodgings overlooking the Thames at Charing Cross, he spent his time visiting publishers and getting drunk.
Stumbling home, he saw whales swimming down Oxford Street.
It was if they were haunting him.

A month later, after a diversion to Paris, he returned to New York with a new book he had been given: Mary Shelley’s Frankenstein.
Its tale of perverted nature and overweening ambition fed into Moby-Dick.
The first version of the book was published in Britain in 1851, entitled The Whale.
It came out in the US later that year as Moby-Dick – and failed, miserably.
When Melville died 40 years later, he and his book were long forgotten.

It has never been easier (or cheaper) to get hold of

If the last 1,400 words haven’t convinced you (“Oh, Time, Strength, Cash, and Patience!” as Melville complained), you don’t have to read the book at all.
The artist Angela Cockayne and I have curated the Moby-Dick Big Read for the University of Plymouth, featuring Tilda Swinton, David Attenborough, Fiona Shaw, Stephen Fry, John Waters, Benedict Cumberbatch and 130 others who will read it to you, chapter by chapter, for free.
The site has had 10m hits to date.

A word of caution, though.
Once you do read it, it’s hard to let it go.
I’m still haunted by Melville: this winter, staying alone in an 18th-century house that he visited on the island of Nantucket off Cape Cod, I started to think that he was coming up the stairs.
This side of the Atlantic, his anniversary ghost has conjured up some aptly eccentric events.
The Isle of Man, which lays claim to a crewman on the Pequod, has issued a set of commemorative Moby-Dick stamps, while a Yorkshire stately home is asking for the return of bones pilfered from the only whale mentioned in Moby-Dick that really did exist – a skeleton assembled at Burton Constable Hall in 1825, on whose jaws, Melville joked, the lord of the manor liked to swing.
And if you happen to be in Paris on Thursday, you can join us reading the book aloud in the bookshop Shakespeare & Co, close to where Melville stayed in 1849.
We are hoping for a bigger crowd than his book launch, when the party consisted of just him and Hawthorne.
Melville was defiant.
“I have written a blasphemous book,” he declared, “and I feel as spotless as the lamb.” The wickedness lives on.
Happy birthday, Herman.