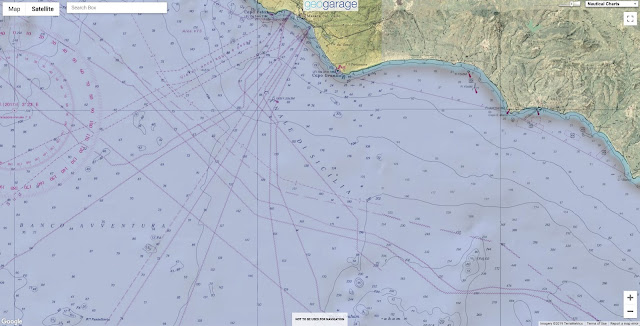 Lurking below a heavily trafficked waterway, the discovery highlights how many mysteries still simmer under the sea.

When the rocky mound lurched onto his computer screen aboard the R/V OGS Explora, geophysicist Emanuele Lodolo couldn’t believe his eyes.
Just 6.4 kilometres off the coast of Sicily, the team had stumbled on a previously unknown volcano with an old lava flow trailing some four kilometres westward across the seafloor.

“We were quite surprised about this, because we were really very close to the coast,” says Lodolo, a researcher at Italy’s National Institute of Oceanography and Experimental Geophysics.

The edifice, named Actea, is one of six volcanoes recently discovered while scientists were mapping the underwater landscape of the Sicilian Channel, a heavily trafficked waterway off the southwest coast of the island.
While Actea is the closest to shore, the structures were all found in the northwest side of the channel, within 23 kilometres of land, researchers report in the journal Marine Geology.

A diver from the Italian army, Carabinieri, collects rocks from one of the newfound volcanoes, Actea, in February 2019. By studying the chemistry of the rocks, the team hopes to better understand the timing of past eruptions and the evolution of the volcanic system.
Photograph courtesy of Emanuele Lodolo

The volcanoes are not especially tall, comparatively speaking, rising between 16 and 107 metres from the seafloor.
But because they sit inside the shallow channel, their tops are not very deep; Actea’s peak is the shallowest at just 34 metres down.

Eruptions from submarine volcanoes can pose hazards to both passing boats and populations nearby. Lodolo cautions that more study is needed to better understand potential risks from the newfound structures, and other geologists agree that any hazards are likely minimal.
But the revelation that six volcanoes are lurking under a region regularly crisscrossed by maritime traffic underscores the importance of fully exploring what lies beneath the waves. 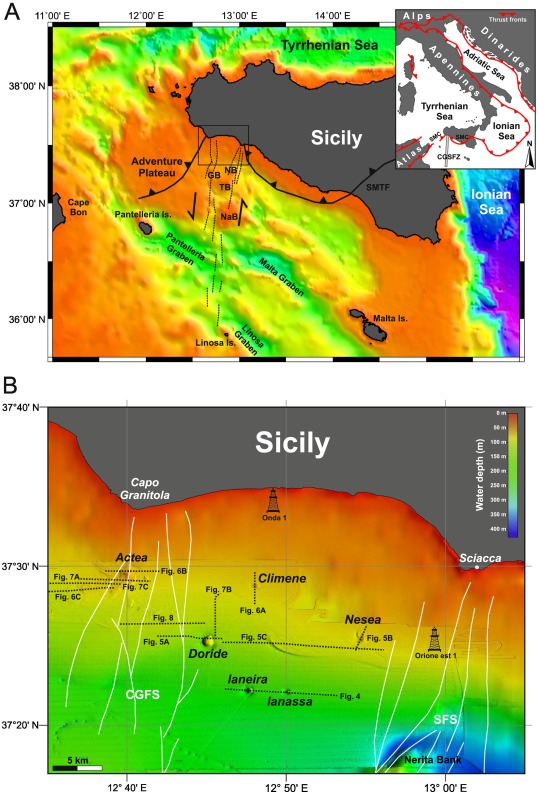 “Sometimes when you’re looking at an area that’s relatively undiscovered, you don’t even know what you might find,” says Western Washington University’s Jackie Caplan-Auerbach, who studies submarine volcanoes. “
There are great mysteries in the ocean waiting to be discovered.”

The presence of six more volcanoes around Italy is perhaps not all that surprising, since these fiery features dot the landscape.
The word “volcano” can trace its roots back to the simmering island of Vulcano north of Sicily, a spot where the Roman god of fire, Vulcan, supposedly foraged weapons.

Italy’s volcanism comes from the fact that the country rests near the collision of several tectonic plates—fragments of Earth’s crust and upper mantle that are engaged in a game of geologic bumper cars. In places where the plates collide, one often dives beneath another, forming what’s known as a subduction zone. 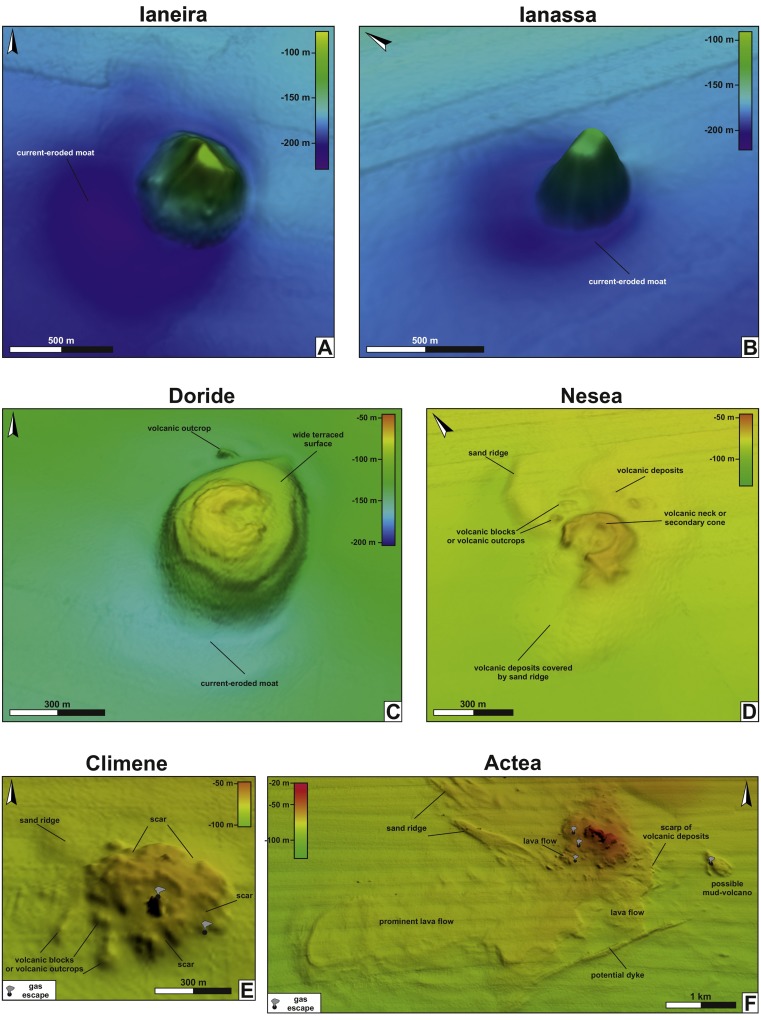 3-D shaded-relief images derived from high-resolution swath bathymetry of the six volcanic edifices described in this study.
The main sedimentary and volcanic-related morphological features are labelled, along with the occurrences of gas escapes (Indicated by a black circles with grey plume icons).

But in Italy, the situation is particularly complex.
The country sits where the Eurasian and African plates are colliding, and the small Adriatic microplate is nestled between the two, to the east of Italy, where it is slightly twisting counter-clockwise.
The situation gets even more wild south of Sicily.
There, the seabed is starting to pull apart in what’s known as a rift, thanks to a slight clockwise rotation of Sicily’s southeastern regions.

“Things are quite weird,” volcanologist Boris Behncke of Italy’s National Institute of Geophysics and Volcanology says via Twitter direct message.

In all, the shifting surface is squishing and pulling the region in a myriad of ways, sparking the rise of volcanoes both on and offshore.
While most of the the Sicilian Channel’s submarine volcanoes have remained quiet since written records began, one burst to life in 1831, forming the now-submerged Ferdinandea Island some 40 kilometres from the coast.

The newfound structures sit closer to shore than these previously known underwater volcanoes, among a series of north-south oriented faults that the researchers believe acted as conduits for rising magma.
Over the course of two research cruises in August 2017 and February 2018, the team studied these structures in exquisite detail.
First, they charted their varied surfaces, creating 3D maps of the submarine topography—craters, lava flows, landslide scars, and all.

Next, they used magnetic analysis to confirm that the structures are actually volcanoes and not just submarine hillsides.
Igneous rocks, which are formed from the crystallisation of lava or magma, contain a fair amount of magnetic minerals.
As the rocks cool, the magnetic minerals act like tiny compass needles, encoding the orientation of Earth’s magnetic field, Caplan-Auerbach explains.

“They kind of all bow down to magnetic north, and then they freeze in place,” she says.

That means a sheet or mound of volcanic rock, in which all these tiny compasses align, would have a strong magnetic anomaly—and that’s just what the team saw when scanning the lobes.


This 3D map reveals the seafloor magnetic anomalies in the Sicilian Channel.
Each peak corresponds to one of the newly identified volcanoes.
Image by Emodnet bathymetry

The scientists also mapped out the shallow subsurface in high-resolution seismic profiles by emitting pings of sound at a frequency that can penetrate the seafloor and will then bounce back, revealing different layers of sediment and rock.
Lodolo compares the system to taking an x-ray of Earth, allowing them to tease apart the delicate subsurface structures. 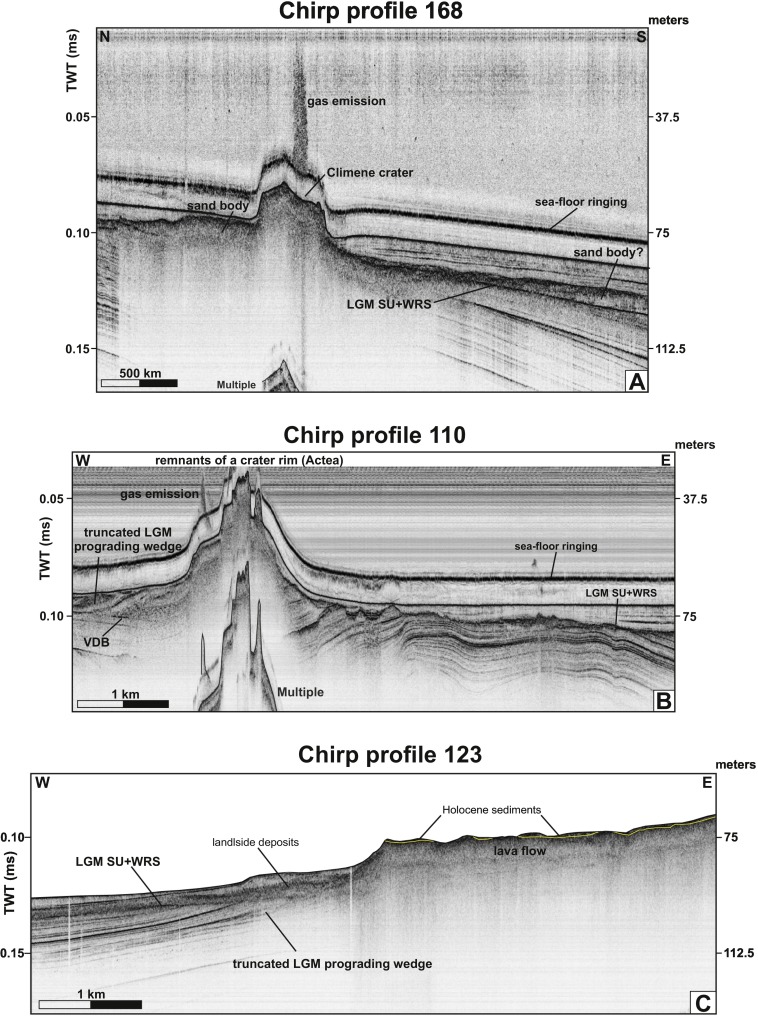 Anatomy of a volcano

From these analyses, the team deduced that five of the volcanoes seem to have erupted just once sometime around the last glacial maximum, some 20,000 years ago.
They are likely what are known as a monogenic volcanoes, which often form in clusters of cones that each erupts only once before going quiet.
Fresh activity in the region often means the birth of a new volcanic cone.

“An area will just pop off once in a while and form a volcano,” explains Bill Chadwick, a geologist specialising on seafloor processes at the NOAA Pacific Marine Environmental Laboratory.

However, Actea may have erupted again at a later date, as evidenced by the four-kilometre-long lava flow the team found solidified off its flanks.
It’s now the largest flow yet found in the northwest Sicilian Channel, according to Lodolo, who compares its size to those pumped out by Italian giants, including Vesuvius and Mount Etna.

Actea and one of its volcanic neighbours, named Climene, both harbour another fascinating feature: bubbles rising from their craters.
Without chemical analysis of the bubbles, however, it’s tough to pinpoint their source, cautions Caplan-Auerbach.
It’s possible they could be the result of biogenic activity releasing methane gas, but they could also be the product of hydrothermal activity.

If the latter is confirmed, “that means that they’re not stone-cold dead,” Chadwick says, although such activity is not evidence of pending eruption, but rather signals the presence of hot rocks lingering deep below the structures.
(Find out about a supposedly extinct volcano that still has magma simmering underneath.)

Lodolo and his team next hope to study the gas being emitted from these systems to get a better grasp on their source.
They also plan to study the chemistry of the rocks to learn more about the timing of past eruptions and the evolution of these volcanoes.
After all, further analysing the structures could yield clues to how volcanism occurs both in Sicily and perhaps other regions around the world.

“Examining interactions between all these processes puts another piece in the puzzle that is the planet,” Caplan-Auerbach says.
“And the more pieces we get, the clearer the picture.”