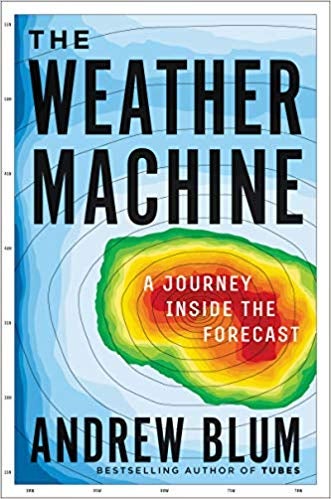 A journey inside the forecast :
In his new book, The Weather Machine, Andrew Blum explores the people, the technology, and the infrastructure behind the weather forecast we rely on day to day, and the role of meteorology in the study of our planet and global policy and decision making

From Gizmodo by Brian Khan

The weather forecast is one of the most ubiquitous things in our daily lives.
People talk about it when there’s nothing else to say, farmers from the Midwest to Mali use it to decide when to plant crops, and everyone loves to (wrongly) complain when it screws up.

But as smartphones have put the forecast right at our fingertips, the tools used to make it are largely out of sight and out of mind.
The Weather Machine, a new book by journalist Andrew Blum, takes a dive into the forecasts of today and how they’ve advanced from a dream espoused nearly 180 years ago.
It also examines how, after an era of unprecedented global cooperation to improve weather forecasts and access to them, the whole weather enterprise is starting to splinter, with private companies jumping in to provide forecasts at a price at the very moment our weather is becoming more chaotic thanks to climate change.

John Zillman, the former head of Australia’s Bureau of Meteorology, tells Blum in his book that the international meteorology enterprise is “one of the world’s most widely used and highly valued public goods.” And frankly, it’s hard to disagree.
As the weather forecast has become more accurate farther into the future, it has translated to valuable warnings that have saved countless lives and property.

The forecasts of today are grounded in decades of research, observations, and massive leaps in technology along the way, from the telegraph of yesteryear to satellites and supercomputers of today.
Blum walks through the work that took place in the mid-1800s and onwards to forecast the weather by first understanding just what the hell is happening in the atmosphere.
In doing so, he chronicles the contribution of early 20th century luminaries in field like Vilhelm Bjerknes and the Bergen School of meteorology, basically the weather equivalent of the da Vinci’s workshop, and Lewis Fry Richardson, who imagined creating a forecast using 64,000 human computers.

These early weather pioneers and the people who assisted them derived equations, launched balloons, and set up rudimentary networks of stations on the ground in an effort to untangle the largely mysterious workings of the atmosphere and how it affects the weather.
They also relied on the burgeoning network of telegraphs to share observations from around the world rapidly, helping assemble some of the earliest weather models to make basic, local forecasts.
Blum also delves into how the weather observing system and forecast slowly became drawn into the orbit—like so many things—of the military-industrial complex during World War II.
That trajectory continued into the Cold War, with John F.
Kennedy using it as a crucial piece of diplomacy with the Soviet Union when he proposed “further cooperative efforts between all nations in weather predictions and eventually weather control.” (We’re still working on the second part of that.)


‘This fascinating book reveals the existence and origins of surely one of our species’ greatest creations’ (Mark Vanhoenacker, author of Skyfaring)
The Weather Machine is about a miraculous-but-overlooked invention that helps us through our daily lives – and sometimes saves them – by allowing us to see into the future.
Shall we take an umbrella… or evacuate the city?
When Superstorm Sandy hit North America, weather scientists had predicted its arrival a full eight days beforehand, saving countless lives and astonishing us with their capability.
Their skill is unprecedented in human history and draws on nearly every major invention of the last two centuries: Newtonian physics, telecommunications, spaceflight and super-computing.
In this gripping investigation, Andrew Blum takes us on a global journey to explain this awe-inspiring feat – from satellites circling the Earth, to weather stations far out in the ocean, through some of the most ingenious minds and advanced algorithms at work today.
Our destination: the simulated models they have constructed of our planet, which spin faster than time, turning chaos into prediction, offering glimpses of our future with eery precision.
This collaborative invention spans the Earth and relies on continuous co-operation between all nations – a triumph of human ingenuity and diplomacy we too often shrug off as a tool for choosing the right footwear each morning.
But in this new era of extreme weather, we may come to rely on its maintenance and survival for our own. photo : AP

The history is totally fascinating to anyone with even a passing interest in weather or technology, and it lays the groundwork for really appreciating just how good we have it today.
The book’s final chapters take the reader on a jaunt from a weather satellite launch to the European Centre for Medium-Range Weather Forecasts, home of the vaunted Euro model that became famous for nailing Superstorm Sandy’s forecasts well before its competition.
In doing so, Blum lays bare how the weather enterprise has improved through huge jumps in technology but also continued cooperation around the world, because the weather knows no borders.

But the advent of for-profit companies with access to massive computing power, and in the case of Google, Apple, and Microsoft, the tiny weather stations in smartphones, now threatens to cleave the world into weather haves and have nots.
The Euro model, for example, is available to basically anyone with an internet connection (seriously, you can go check it right here).
But private companies are coming up with pay-for forecasts using it and other tools with more regularity, creating a weather arms race become companies dealing with everything from oil, gas, and crop futures to how much wind will blow and turn wind farms on a given day.

As Blum writes, “[w]hen the Weather Company [which is owned by IBM] sells its global forecasts to Facebook, and Facebook is a nation’s main source of news, where does that leave the nation’s weather service?”
The privatization of weather isn’t necessarily all bad, since you can now check the weather at a moment’s notice on your iPhone app (which is powered by the Weather Channel, formerly owned by the Weather Company).
But it does risk diluting the authority of national weather services and the warnings they issue for dangerous weather.
What if, for example, Google decided to start issuing its own storm surge forecast for hurricanes?
If you lived outside Google’s area of inundation but within the one being forecast by the national weather service, which would you trust?
What if you decided to stay based on Google’s forecast and were seriously injured when the forecast busted?
Who is to blame, and what recourse is there?