Amazon began simply with the task of selling books over the internet.
Yet, CEO Jeff Bezos never intended to stop there and in the past 25 years to the present day the company has expanded its aspirations to cover novel concepts such as drone-based deliveries and flying warehouses.
Now, according to recent reports spotted by Geek Wire, Amazon intends to release a constellation of 3,236 satellites into low-Earth orbit to provide internet access to underserved communities around the planet.
Digital Trends reports that the filings, for what Amazon terms “Project Kuiper,” were made with the International Telecommunication Union (ITU), an agency within the United Nations that is responsible for issues including satellite orbits.
According to an Amazon spokesperson: “Project Kuiper is a long-term project that envisions serving tens of millions of people who lack basic access to broadband internet. "

Amazon is asking the Federal Communications Commission for approval of its Project Kuiper satellite broadband venture, and referring to potential synergies with Amazon Web Services as a strong selling point.

GeekWire first reported news of Project Kuiper in April, when Amazon revealed plans to put more than 3,200 satellites in low Earth orbit for global broadband coverage.
That revelation was contained in documents that were filed with the International Telecommunication Union.
On Thursday, Amazon’s wholly owned Kuiper Systems subsidiary followed up with a fresh set of FCC filings. 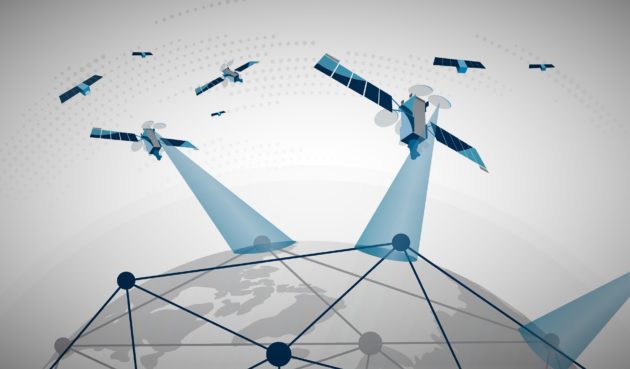 Satellites could extend cloud computing to the final frontier.
"The Kuiper System covers the area between 56°N and 56°S latitudes," the Amazon subsidiary told the FCC. "Accordingly, customers throughout [the] continental US, Hawaii, and all US territories will have access to Kuiper System services. So too will customers in many other countries within the coverage area. The Kuiper System will not provide FSS [fixed-satellite service] in the majority of Alaska, however, because the state's high latitude is outside of the coverage area."
Amazon is the latest in a string of companies with plans to use a network of thousands of satellites to offer broadband around the world.
Unlike traditional satellite internet, these plans involve the use of satellites in low Earth orbit, which can be operated cheaply and with lower latencies. SpaceX has plans to launch as many as 12,000 satellites as part of its Starlink constellation, OneWeb wants to launch 650 satellites, and Facebook is also developing an internet satellite of its own.
Lockheed Martin illustration

The filings confirm that the project would consist of 3,236 satellites in 98 orbital planes, at altitudes ranging between 366 and 391 miles (590 and 630 kilometers).
“Amazon’s mission is to be Earth’s most customer-centric company, and the Kuiper System is one of our ambitious projects to fulfill this mission,” the application reads.
“The Kuiper System will deliver satellite broadband communications services to tens of millions of unserved and underserved consumers and businesses in the United States and around the globe.”

In the filings, Kuiper Systems cites studies showing that 3.8 billion people around the world lack reliable broadband service, and that 21.3 million Americans don’t have access to fixed broadband.

The application says “Amazon will leverage its resources and capabilities to develop, implement and interconnect the Kuiper System and terrestrial networks to delight customers.”
Such statements seem to suggest links between Kuiper and other lines of business ranging from online sales to cloud services and video streaming.

Other companies besides Amazon have big satellite ambitions as well: SpaceX, for example, has begun deploying satellites in low Earth orbit, or LEO, for its Starlink broadband constellation.
SpaceX CEO Elon Musk said earlier this year that the revenue from Starlink could amount to $30 billion or more annually.
OneWeb, Telesat and LeoSat Technologies also have plans for providing broadband via LEO satellites.
That’s led some experts to wonder how many mega-constellations the world needs, and how many satellites the night sky can handle.

In fact, the FCC filings acknowledge that Project Kuiper’s satellites would have to play nice with other companies’ satellites when it comes to sharing broadcast spectrum and avoiding interference.
Kuiper intends to use Ka-band radio frequencies, including a part of the spectrum that Iridium is already using for its next-generation telecom satellite constellation.

Kuiper Systems’ filings note that the FCC has laid out procedures for different companies to share spectrum, and so the venture is seeking waivers from the agency to proceed with systems and procedures that would address interference concerns.
It’s also seeking a waiver from an FCC requirement to serve all of the United States and its territories, on the grounds that parts of Alaska are too far north to get satellite reception from Kuiper’s constellation.

In its technical analysis, Kuiper Systems says it can start offering satellite broadband service once it finishes the first of five phases of deployment by putting 578 satellites in their proper orbits.
Like SpaceX’s Starlink satellites, Kuiper’s satellites would be launched into lower orbits at first, and then have those orbits raised once they’re checked out.

The filings don’t go into detail about Project Kuiper’s satellite design, but they do say the spacecraft would use phased-array antennas to produce “steerable and shapeable” beams.
The satellites would use an “unpressurized, non-explosive propellant” for safety’s sake.
And to address concerns about orbital debris, the satellites would be designed to deorbit themselves in less than 10 years, even if they fall out of contact with ground controllers.

There’s no mention of when Kuiper’s satellites would be launched, or which company would launch them.
Bezos’ privately held space venture, Blue Origin, could conceivably take on the job — but that could get tricky, because publicly traded Amazon would have to guard against conflicts of interest.

The filings confirm that Rajeev Badyal, the satellite engineer who once led SpaceX’s Starlink effort but was reportedly fired last year, is the president and manager of Kuiper Systems.
And although most of the jobs listed for Project Kuiper are in Bellevue, Wash., the headquarters for Kuiper Systems is listed as 410 Terry Ave. N. in Seattle’s South Lake Union district — which is Amazon’s headquarters building.