Is this the world's most dangerous sea route? 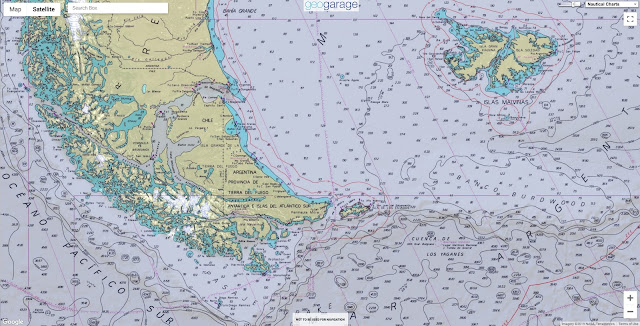 From BBC by James Clark

To commemorate the 500th anniversary of the discovery of the Strait of Magellan, a writer sets off in his grandfather’s wake to the deadly Cape Horn headland.

When I was a child, my grandfather Alfred Downes often spoke about the 128-day journey that he took in 1949 aboard the Pamir.
The famous four-masted barque, a German Flying P-Liner ship, was sailing from Port Elizabeth in Adelaide, Australia, to the town of Falmouth in Cornwall, England, filled with 60,000 sacks of Australian grain.
It was the barque’s final journey through the stormy seas of the Drake Passage, and it would be the last time a commercial sailing ship ever rounded Cape Horn in southern Chile.


To commemorate the 70th anniversary of my grandfather’s voyage and the upcoming 500th anniversary of the discovery of the Strait of Magellan sea route that separates South America’s southernmost tip with Chile’s Tierra del Fuego archipelago, I boarded the Ventus Australis expedition cruise liner in Punta Arenas, Chile.
I had always wanted to see some of the landscapes my grandfather spoke about, and while it was impossible to replicate his four-month odyssey, my four-night jaunt let me follow in the spirit of his adventure, taking me through the Strait’s narrow fjords that he sailed around and then south to the climax of his voyage: the perilous Cape Horn headland that stayed with him for the rest of his life.

My grandfather left Australia as a 20-year-old deckhand on the Pamir and never returned home.
He had long dreamed of leaving Australia, as his relationship with his father was not a happy one.
His father wanted him to marry a girl from his hometown in the Adelaide suburbs and work on the family farm.
Instead, he wanted to start a new life in England.
It was a country that he knew little about, but he had always been fascinated by its history as a schoolboy.

When an opportunity to join the Pamir arose courtesy of a family friend, my grandfather quickly accepted and boarded the ship three days later alongside 33 other crewmembers.
He worked 18-hour shifts and spent his days cleaning and mopping the deck, helping in the kitchen and emptying toilets.
He hated the work so much that while other crewmembers were signing up for the 128-day return voyage back to Australia, he disembarked and headed straight to the town of Wymondham in Norfolk.
He’d heard rumours there were opportunities for farmers in the market town’s rolling countryside, and he lived there for 54 years until he died in 2003.

The only things my grandfather loved about the journey were seeing the remote Tierra del Fuego archipelago that shelters the Strait of Magellan from the ocean, breathing the Antarctic air deep into his lungs and feeling the icy-cold breeze blowing in his face.
“It was like nowhere else on Earth and a far cry from my life working on my father’s dry and arid farm,” he told me when I was a 10-year-old boy, with a look of wonder in his eyes.
“Not one single thing reminded me of home.
I felt lost and frightened, yet free.”

In 1949, the author's grandfather embarked on a 26,000km voyage aboard the Pamir from Australia to England

Seventy years later, I arrived in Punta Arenas and wandered through the city’s main square, Plaza de Armas.
A bronze statue of Ferdinand Magellan, the first European to navigate the eponymous strait in 1520 during his global, circumnavigational voyage, towers over a cannon.
The Portuguese explorer sailed near the present-day city – located near the southernmost stretch of Chile’s Patagonia region – and, as evidenced by the discolouration of his bronze boots, it is now considered good luck for those boarding cruises to touch Magellan’s toes before following in his footsteps and journeying through his strait.

For nearly 400 years, the Strait of Magellan was the main route for ships travelling between the Atlantic and Pacific oceans.
Despite its narrow 600km-long passage through a clustered network of islands and fjords, it was thought to be a quicker and safer route than rounding Cape Horn to the south and entering the infamously turbulent Drake Passage that separates Cape Horn and Antarctica’s South Shetland Islands.

The completion of the Panama Canal in 1914 caused sea traffic through the Strait to decline significantly, but unlike steamships, sailing ships coming from Australia had difficulty accessing the Canal’s western entrance because of its location in the middle of a notorious belt of doldrums.
But because of the Pamir’s 114m length and 14m beam, the mammoth, steel-hulled barque was too large to sail through the winding Strait.
Thus, my grandfather had no choice but to skirt the edges of the strait and Tierra del Fuego islands and round Cape Horn.
He was quite proud that he and his crewmates were the last commercial sailors to ever do so, saying, “Last is good, as first you go down in history.”

Author James Clark standing at the foot of the memorial to the many sailors who have lost their lives attempting to 'round the Cape' (Credit: Ben Sayer)

I sipped on a pisco sour as the crew of the Ventus Australis pulled up anchor in Punta Arenas.
The difference between my grandfather’s experience and mine wasn’t lost on me: if navigating 26,000km through some of the world’s stormiest seas was like climbing Mount Everest for a sailor, my cruise was kind of like climbing on a Sherpa’s shoulders to carry me to the top.

The lights of Punta Arenas faded as we entered the maze-like channels of the Strait.
The sky soon turned black and all I could sense was the ship’s movement over the waves.
My grandfather had spoken about long nights of darkness and loneliness on the open seas.
It had been difficult for him to leave his mother and sisters behind, but he never questioned his decision to start a new life in a new land on his own terms.

Early the next morning, I boarded a small, inflatable Zodiac and motored to the rocky shores of Ainsworth Bay.
The long fjord is surrounded by a sub-polar forest and set beneath the towering white peaks of Marinelli Glacier.
As we headed closer to the icecaps, I was stunned by the beauty of the place.
The sun reflected off of the glacier and the sea was so clear that it could have been mistaken for fresh drinking water.

I spent two hours hiking the crest of a glacial lake, passing turquoise streams and waterfalls.
The sheer silence of the place was magical.
My grandfather often recalled the silence of the region – a phenomenon he described as ‘The Patagonia Moment’.
As a child, this notion had been difficult for me to grasp, but as an adult, I loved it.
Whenever I would talk over him and my grandfather wanted me to be quiet, he would look at me sternly and say, “It’s about time you experienced The Patagonia Moment.
Just be quiet.” Ainsworth Bay was the first time in my life that I had ever experienced complete silence, and I couldn’t help but think of him.

Set in the Strait of Magellan, Ainsworth Bay is marked by a long fjord and surrounded by a sub-polar forest (Credit: James Clark)

Later that afternoon, we jumped back onto the Zodiac and travelled through much rougher seas to observe Magellanic penguins on Tuckers Islets.
My grandfather liked to recall a rocky Patagonian island covered in penguins that he viewed from the Pamir’s deck.
He described the birds as ‘smelly, funny-looking things’ and often made jokes about eating them.
The 4,000 penguins that inhabit Tuckers today appeared quite content as the sky tuned dark grey and it began to pour.
I smiled to myself as I watched the penguins at play, wondering if they were the distant relatives of those my grandfather had seen 70 years ago.

As we approached Pia Glacier the next morning and a spectacular landscape known as Glacier Alley, I remembered my grandfather excitedly talking about a dramatic stretch of water amid the Tierra del Fuego islands filled with icefields and “huge chunks of ice between mountains”.
It was only much later in life that he learned these formations had a name: glaciers.
Whenever the Pamir would pass one of these ‘chunks of ice’, he recalled that the crew would stop what they were doing to take in the spectacular scene.
It must have felt otherworldly to them.

“It was the most astonishing site!” he told me one Christmas morning when I was eight years old as he stared out of my bedroom window at a dangling icicle.
“I’d never seen a glacier before.
We didn’t have them in Adelaide.”

Frozen in the north-west corner of the Beagle Channel, Pia Glacier was once a 14-sq-km hunk of ice and has now shrunk to around 7 sq km.
As I wandered close to the glacier and climbed high into the Darwin Mountain Range, the sounds of ice tearing off the glacier and plummeting into the sea below shattered the silence.

I felt like a bit of a cheat as I remained on board that afternoon in the warmth and watched one giant glacier after another.
My grandfather often talked about sitting on deck with a drink in one hand to keep warm and a cigarette in the other while inhaling freezing-cold air.
As our ship navigated around floating chunks of ice, I watched as a small pod of dolphins swam alongside us.
Later, I spotted a whale, just 20m from the ship, spray water 1m into the air like an exploding geyser.

At the end of Glacier Alley, we veered south-east and headed towards the highlight of my grandfather’s and my journeys: Cape Horn.
The Pamir had to approach this rocky headland by braving the Drake Passage, whose frequent gale-force winds and 10-storey swells have caused hundreds of ships to sink, and inspired Charles Darwin, Herman Melville and Jules Verne to write of its fury.

Frozen in the north-west corner of the Beagle Channel, Pia Glacier was once a 14-sq-km hunk of ice and has now shrunk to around 7 sq km
(Credit: James Clark)

I knew we were getting close when I awoke sharply at 04:30 as the ship began to roll on large waves.
Even aboard a cruise, the waters around the Drake Passage are still known as one of the most dangerous maritime routes in the world.
I struggled to make my way into the shower as the ship listed, and a sharp knock to the ribs in the strong current helped wake me up.

Due to the area’s erratic weather conditions, many cruises aren’t able to land in Cape Horn.
In fact, as the Pamir approached the Cape in 1949, my grandfather and other crewmembers spent the morning shovelling snow off the ship’s deck.
But as the wind calmed enough for us to eventually reach the Cape safely on the Zodiac, I could feel my grandfather smiling down on me.

Rain, hail and wind pelted my face as we landed on Cape Horn.
I climbed up the rocks towards a lighthouse, a small chapel and a giant sculpture commemorating the thousands of sailors who had died attempting to ‘round the Cape’.

The Pamir didn’t land at Cape Horn, but my grandfather never forgot what he described as an ‘evil-looking’ rock on the island staring back at him from the ship.
“Too many had died there before me, doing exactly what I was doing,” he once told me.
“I was keen to get away from Cape Horn as quickly as possible, and had no intention of ever returning.”

Yet, here I was staring squarely at the jagged landscape that had inspired my grandfather to keep sailing, keep living and never look back.
I wondered what he would have thought about me trying to follow in his wake, and I hopped back in the Zodiac, letting the wind push me onwards.