How the Internet travels across oceans

Note: Cables shown in the map are ones that are currently in use, planned or being constructed.
They do not show cables that were decommissioned.
The content providers comprise cables publicly announced that Apple, Google, Microsoft or Netflix partly own, solely own or are a major capacity buyer of a cable owned by another company.
Source: TeleGeography

From NY Times by Adam Satariano

‘People think that data is in the cloud, but it’s not. It’s in the ocean.’

The internet consists of tiny bits of code that move around the world, traveling along wires as thin as a strand of hair strung across the ocean floor.
The data zips from New York to Sydney, from Hong Kong to London, in the time it takes you to read this word. 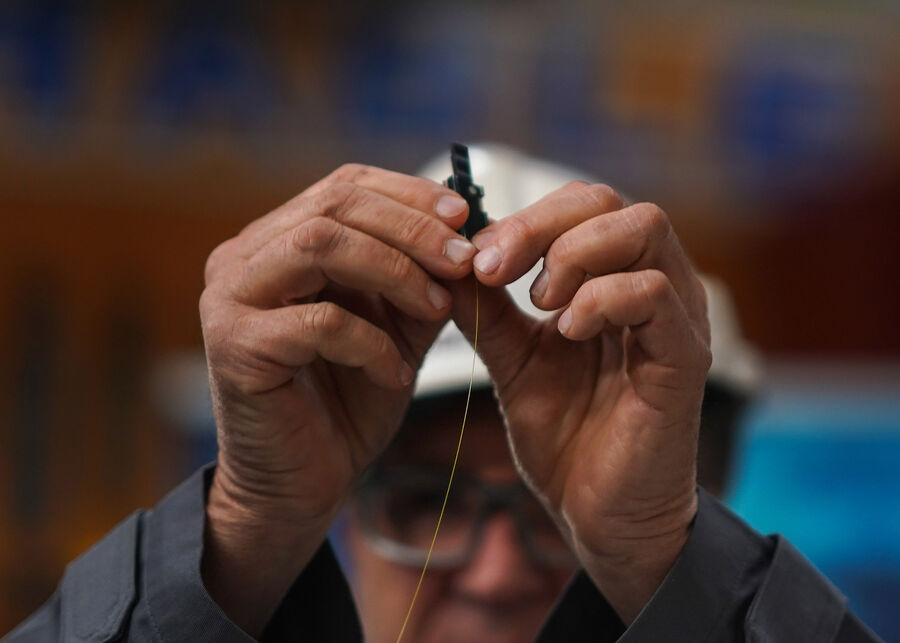 Nearly 750,000 miles of cable already connect the continents to support our insatiable demand for communication and entertainment.
Companies have typically pooled their resources to collaborate on undersea cable projects, like a freeway for them all to share.

But now Google is going its own way, in a first-of-its-kind project connecting the United States to Chile, home to the company’s largest data center in Latin America. 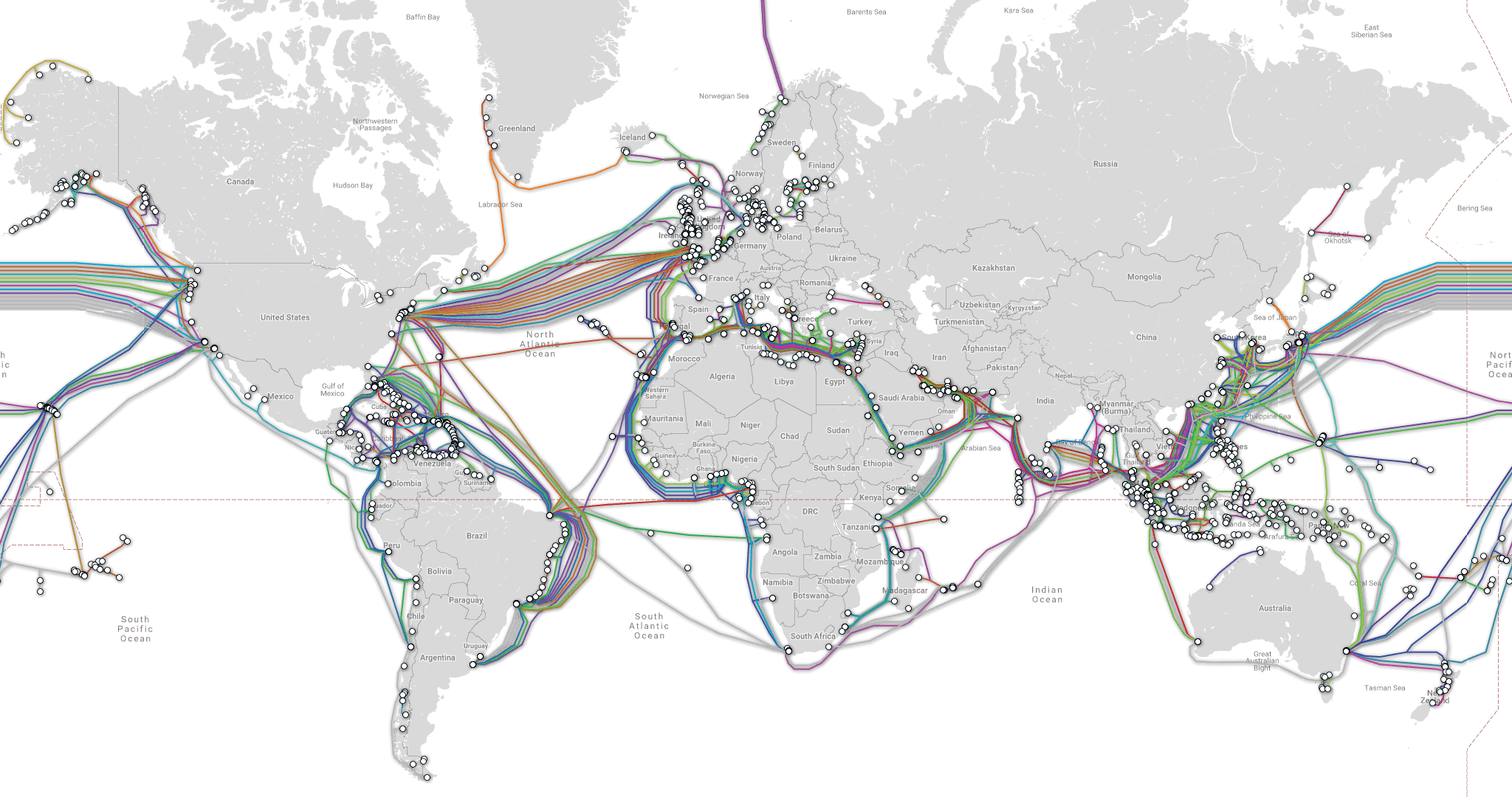 “People think that data is in the cloud, but it’s not,” said Jayne Stowell, who oversees construction of Google’s undersea cable projects.
“It’s in the ocean.”

Getting it there is an exacting and time-intensive process.
A 456-foot ship named Durable will eventually deliver the cable to sea.
But first, the cable is assembled inside a sprawling factory a few hundred yards away, in Newington, N.H.
The factory, owned by the company SubCom, is filled with specialized machinery used to maintain tension in the wire and encase it in protective skin. 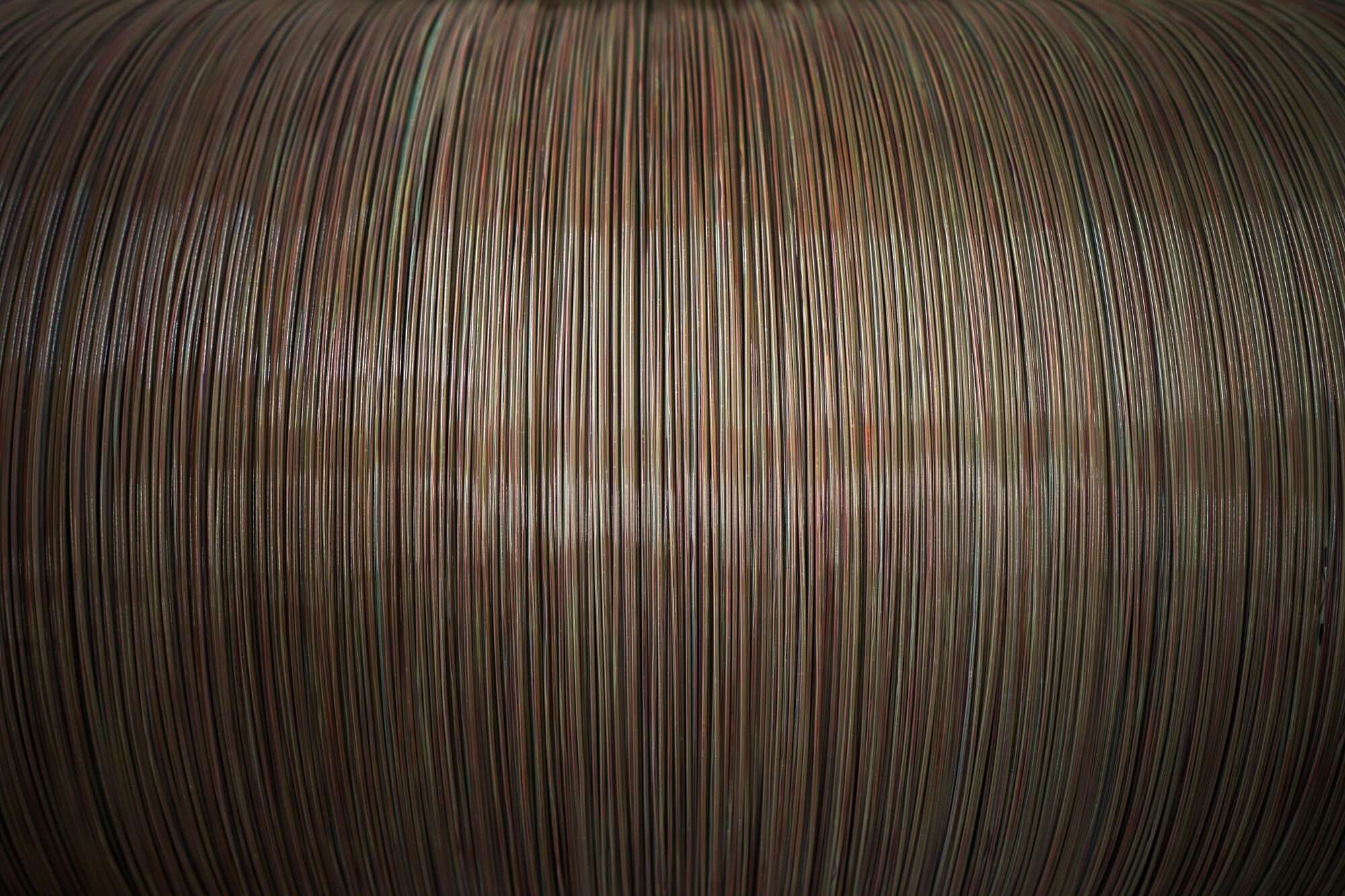 The cables begin as a cluster of strands of tiny threads of glass fibers.
Lasers propel data down the threads at nearly the speed of light, using fiber-optic technology.
After reaching land and connecting with an existing network, the data needed to read an email or open a web page makes its way onto a person’s device.

While most of us now largely experience the internet through Wi-Fi and phone data plans, those systems eventually link up with physical cables that swiftly carry the information across continents or across oceans.

In the manufacturing process, the cables move through high-speed mills the size of jet engines, wrapping the wire in a copper casing that carries electricity across the line to keep the data moving.
Depending on where the cable will be located, plastic, steel and tar are added later to help it withstand unpredictable ocean environments.
When finished, the cables will end up the size of a thick garden hose. 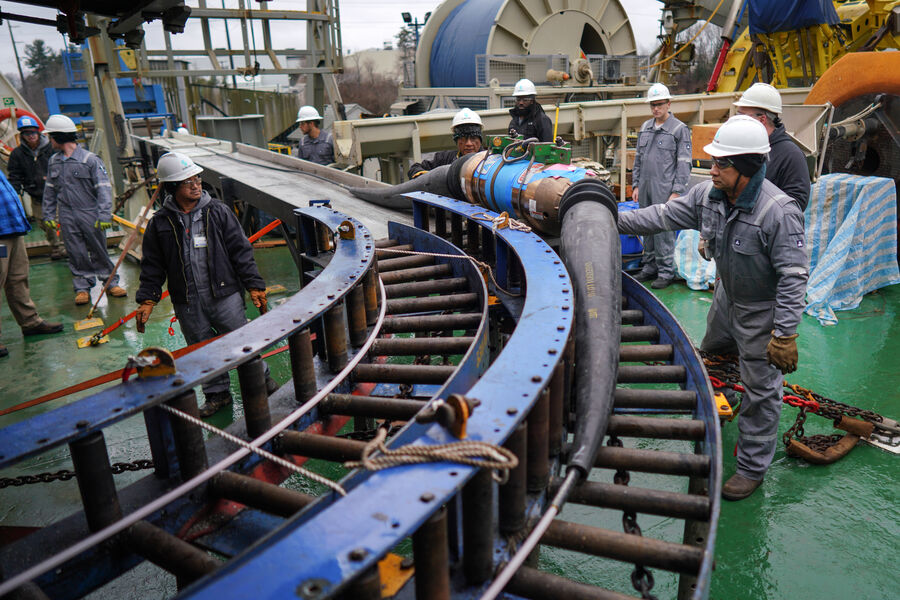 A year of planning goes into charting a cable route that avoids underwater hazards, but the cables still have to withstand heavy currents, rock slides, earthquakes and interference from fishing trawlers.
Each cable is expected to last up to 25 years.

A conveyor that staff members call “the Cable Highway” moves the cable directly into Durable, docked in the Piscataqua River.
The ship will carry over 4,000 miles of cable weighing about 3,500 metric tons when fully loaded.

Inside the ship, workers spool the cable into cavernous tanks.
One person walks the cable swiftly in a circle, as if laying out a massive garden hose, while others lie down to hold it in place to ensure it doesn’t snag or knot.
Even with teams working around the clock, it takes about four weeks before the ship is loaded up with enough cable to hit the open sea. 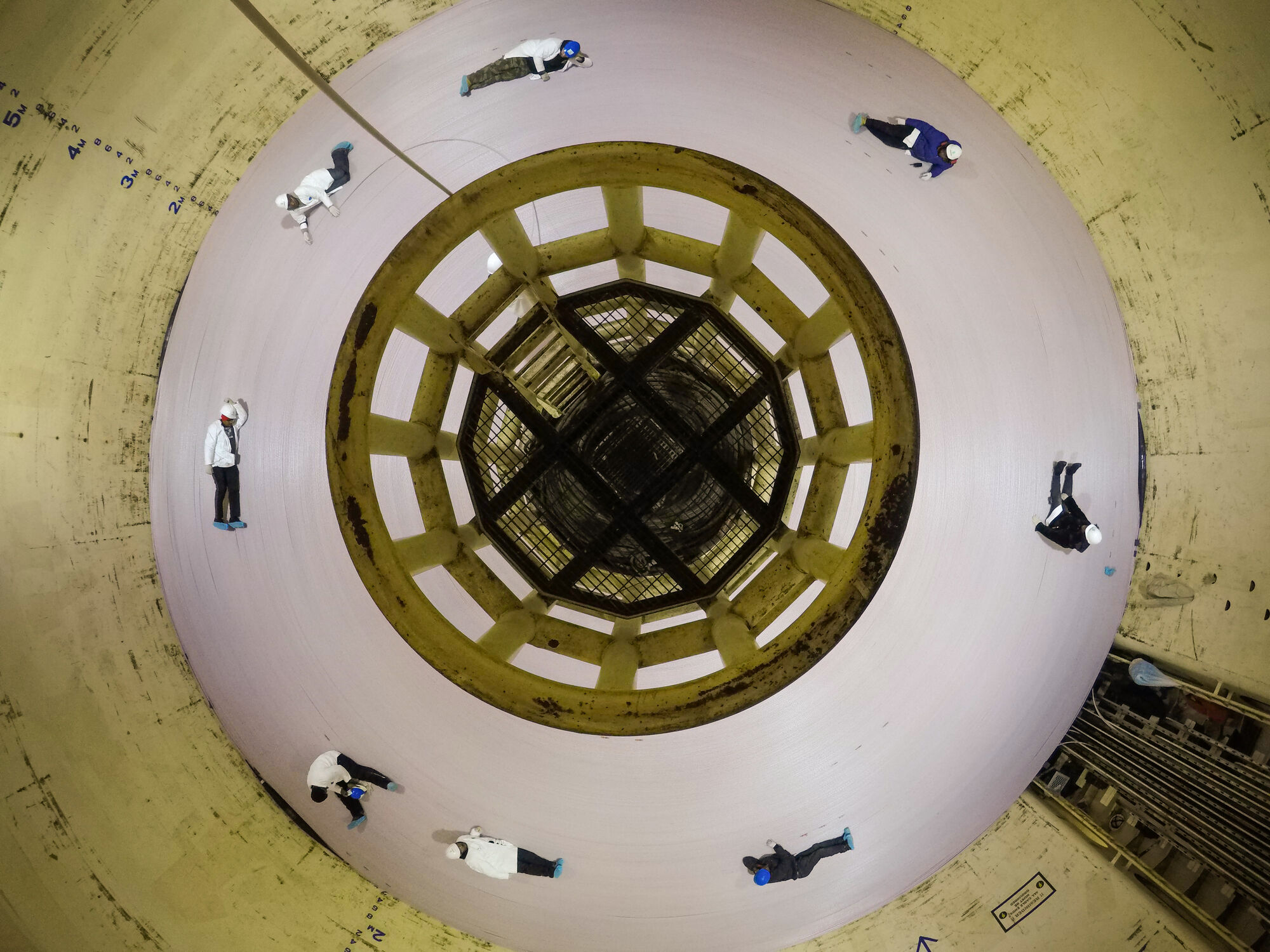 The first trans-Atlantic cable was completed in 1858 to connect the United States and Britain.
Queen Victoria commemorated the occasion with a message to President James Buchanan that took 16 hours to transmit.

While new wireless and satellite technologies have been invented in the decades since, cables remain the fastest, most efficient and least expensive way to send information across the ocean.
And it is still far from cheap: Google would not disclose the cost of its project to Chile, but experts say subsea projects cost up to $350 million, depending on the length of the cable.

In the modern era, telecommunications companies laid most of the cable, but over the past decade American tech giants started taking more control.
Google has backed at least 14 cables globally.
Amazon, Facebook and Microsoft have invested in others, connecting data centers in North America, South America, Asia, Europe and Africa, according to TeleGeography, a research firm.

Countries view the undersea cables as critical infrastructure and the projects have been flash points in geopolitical disputes.
Last year, Australia stepped in to block the Chinese technology giant Huawei from building a cable connecting Australia to the Solomon Islands, for fear it would give the Chinese government an entry point into its networks. 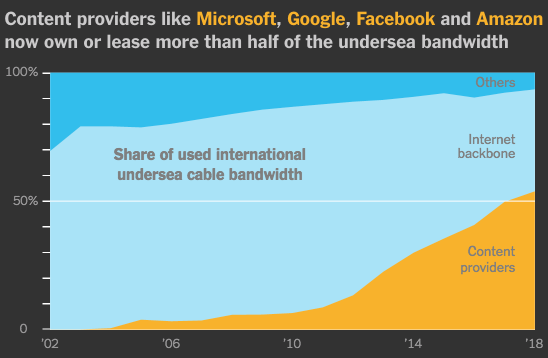 Yann Durieux, a ship captain, said one of his most important responsibilities was keeping morale up among his crew during the weeks at sea.
Building the infrastructure of our digital world is a labor-intensive job.

With 53 bedrooms and 60 bathrooms, the Durable can hold up to 80 crew members.
The team splits into two 12-hour shifts.
Signs warn to be quiet in the hallways because somebody is always sleeping. 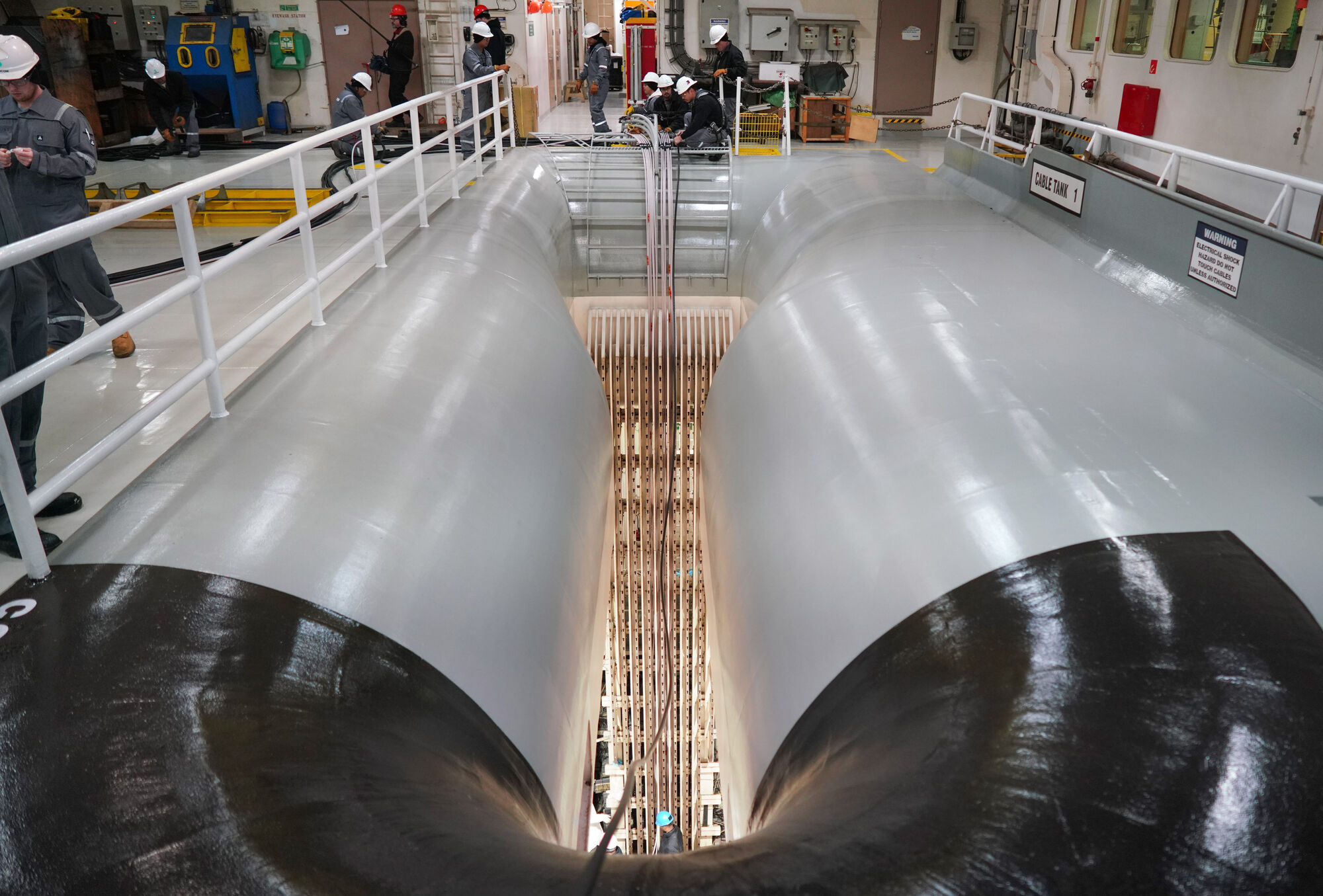 “I still get seasick,” said Walt Oswald, a technician who has been laying cables on ships for 20 years.
He sticks a small patch behind his ear to hold back the nausea.
“It’s not for everybody.”

Poor weather is inevitable.
Swells reach up to 20 feet, occasionally requiring the ship captain to order the subsea cable to be cut so the ship can seek safer waters.
When conditions improve, the ship returns, retrieving the cut cable that has been left attached to a floating buoy, then splicing it back together before continuing on.

Work on board is slow and plodding.
The ship, at sea for months at a time, moves about six miles per hour, as the cables are pulled from the giant basins out through openings at the back of the ship.
Closer to shore, where there’s more risk of damage, an underwater plow is used to bury the cable in the sea floor.

The Durable crew doesn’t expect the work to slow down anytime soon.

After the Latin America project, Google plans to build a new cable running from Virginia to France, set to be done by 2020.
The company has 13 data centers open around the world, with eight more under construction — all needed to power the trillions of Google searches made each year and the more than 400 hours of video uploaded to YouTube each minute. 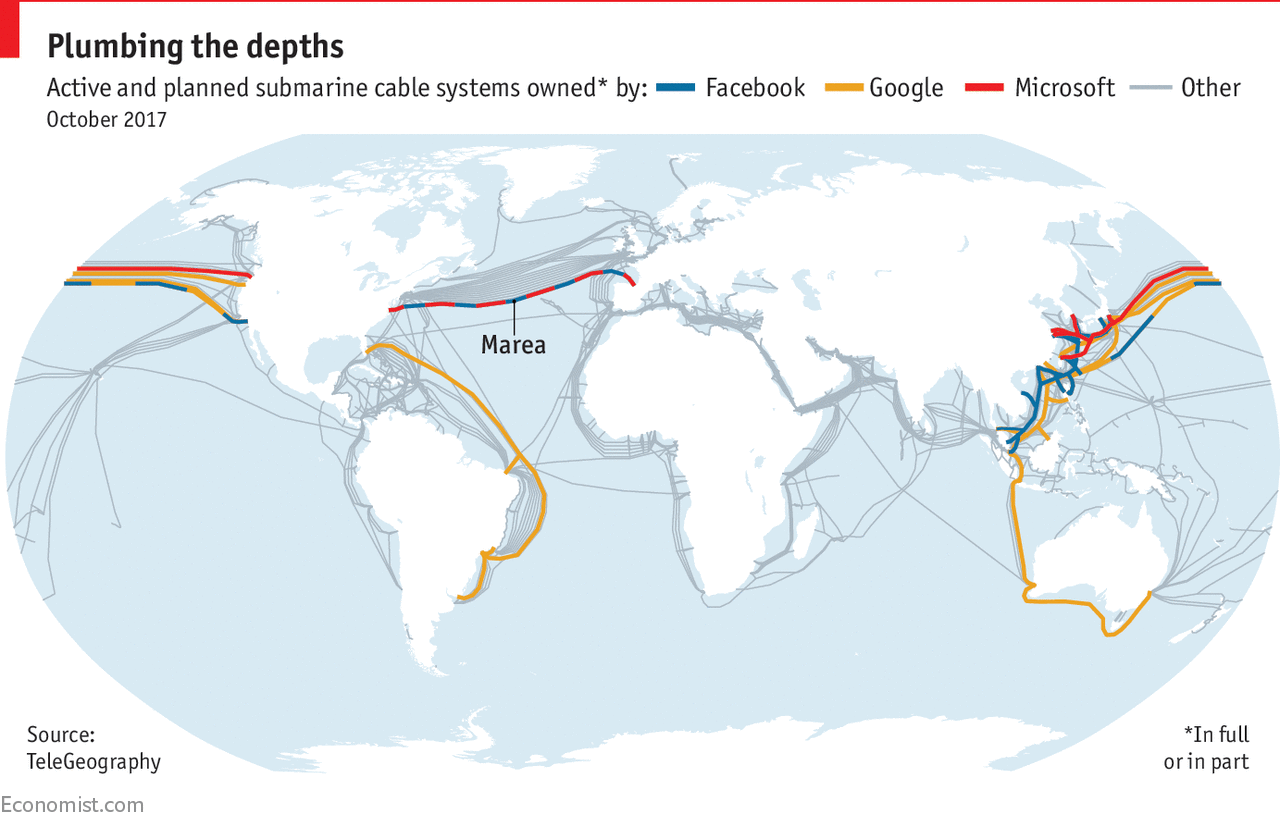 “It really is management of a very complex multidimensional chess board,” said Ms. Stowell of Google, who wears an undersea cable as a necklace.

Demand for undersea cables will only grow as more businesses rely on cloud computing services.
And technology expected around the corner, like more powerful artificial intelligence and driverless cars, will all require fast data speeds as well.
Areas that didn’t have internet are now getting access, with the United Nations reporting that for the first time more than half the global population is now online.

“This is a huge part of the infrastructure that’s making that happen,” said Debbie Brask, the vice president at SubCom, who is managing the Google project.
“All of that data is going in the undersea cables.”