Ocean life in 3-D: Mapping phytoplankton with a smart AUV

An artist's visualization of Harald in the ocean, detecting and measuring chlorophyll a as an indication of phytoplankton amounts and locations.
Image: David Fierstein and Arild Hareide

From Gemini Search by Nancy Bazilchuk

Phytoplankton form the base of the marine food chain but are notoriously difficult for scientists to account for — a little like trying to identify and count motes of dust in the air.
A truly independent underwater vehicle shows it can do the job.

Trygve Olav Fossum watched an orange, torpedo-shaped instrument slide off the R/V Gunnerus and plop into the coastal waters near the island called Runde.
It was June 2017 and Fossum, a PhD candidate at NTNU, was part of a team of researchers trying to find answers to a vexing problem.

Runde, a triangle-shaped island off the mid-Norwegian coast, is known for its large seabird populations, including Atlantic puffins and Northern Gannets.

In recent years, bird numbers here and in much of the North Atlantic have dropped precipitously.
No one knows quite why.

As a first step in their search for clues, NTNU researchers had assembled an interdisciplinary team of geologists, biologists, mathematicians, computer scientists and engineers, like Fossum, whose two metre-long autonomous underwater vehicle (AUV) would contribute to one of the most unusual pieces of information on the Gunnerus’s week-long survey.

Harald the smart AUV off on its hunt for phytoplankton patches.
Photo: Trygve Fossum, NTNU

Fossum’s AUV, named after the Norwegian oceanographer Harald Sverdrup, would collect information that allowed scientists to make a 3-D map of hot spots of phytoplankton.
These are the tiny single-celled algal cells at the base of the food chain.
Their microscopic size and tendency to collect in patches have made this information nearly impossible for biologists to gather in the past.

The AUV was programmed to think on the go — “seeing” where the phytoplankton were, choosing its own course to zoom in on patches in an area to get a better sample.
Scientists call this “adaptive sampling.” The 3-D maps, in turn, could provide important clues as to why bird populations around Runde were plummeting.

Puffins, photographed on Runde Island during early summer.
Populations of puffins and other seabirds that nest on Runde’s steep cliffs have dropped dramatically in recent years.
Photo: Rick Strimbeck/NTNU

Zooplankton eat phytoplankton.
Little fish eat zooplankton.
Bigger fish eat the smaller fish.
Finally, seabirds like puffins feast on these patches of fish.
If something was changing phytoplankton amounts or distribution, it could set off a chain reaction that could affect the birds.

Having a smart AUV that can be programmed to seek out phytoplankton patches “is a complete game-changer,” says Geir Johnsen, an NTNU biologist is collaborating on the project.
The results from Harald’s tour in the waters off Runde were recently reported in Science Robotics.

The map is a screenshot that illustrates typical boat traffic near the island of Runde, which is indicated with the orange arrow. 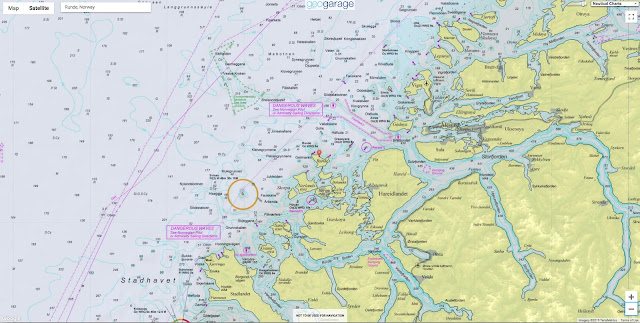 Large areas of unknown, and concentrated patches of fecundity

Marine biologists face a fundamental problem.
The ocean is deep, broad and generally poorly understood.
Some areas are more interesting than others, especially the small, concentrated areas that teem with life, such as coastal waters or the places where currents meet.
To do their job, biologists need to understand what factors make some patches of ocean fertile while others are not.

Biologists describe this situation as, well, “patchiness,” Fossum said.
The patchiness of phytoplankton is related to a number of different biophysical interactions, such as currents, turbulence and mixing, and biological processes, like how many other creatures are eating the phytoplankton.

“That means it’s a very hard question to figure out what controls the patchiness of these organisms in the ocean,” Fossum said.

Even if you are in a place that’s known to be a hot spot, patchiness can make it difficult to accurately quantify marine organisms in the area, especially if you are taking samples from a research boat, says Glaucia Fragoso, a postdoc at NTNU’s Department of Biology who was on the cruise with Fossum.

Why patches are where they are

That’s what makes the adaptive sampling of Harald, the AUV, so unique, Fragoso said.
Given an area to explore, it can make a 3-D map of phytoplankton patches.
And knowing where patches are allows scientists to study other characteristics of that area so they better understand why the patches are where they are.

“Is the (phytoplankton) concentration there because of salinity?” said Fossum.
“Maybe the phytoplankton are concentrated along a temperature or salinity layer, or maybe there is some other physical effect that is keeping them where they are?”

Knowing where and why phytoplankton aggregate and cluster in different ways can help answer questions about creatures that depend on the ocean for food, like the seabirds at Runde.

Seabirds typically nest in areas where they have easy access to food, since they have to feed themselves and their chicks, too.
So figuring out phytoplankton amounts and where they are, in combination with other measurements, may help explain larger trends in seabird populations.
Adaptive sampling for greater detail

Harald was programmed with a sophisticated brain and equipped with a special measuring device called an ECOpuck nestled in its backside.
When Fossum released it into the water that June day, Harald would roam the ocean’s depths in an area bounded by a 700×700 metre box, collecting information to make a 3-D map of phytoplankton.

At the start of the AUV’s journey, it takes measurements on the sides of the box and then gradually zooms into the area outlined by the box as it detects the region that seems to have the most chlorophyll a, Fossum says

“It boxes in a volume of water and based on what it sees, it estimates what is inside,” he said.
“Then it plans a route for inside and makes a map of the most interesting region.
What I really want from this is an accurate map, with the accuracy where it is most needed — where the plankton aggregation is high.”

The researchers also relied on other sampling methods to collect even more information about plankton around Runde, including a special camera that took pictures of individual plankton, and counted and identified them automatically to help verify the results from the AUV.
A future for ships and AUVs

In spite of the success of the AUV, Fossum and others explain that biologists still need to gather information from other sources — like research cruises aboard the R/V Gunnerus.

“Oceanography is moving towards combined efforts to collect data, where robotic sampling is an essential part, providing capabilities and resolution that were previously unattainable with traditional methods,” Fossum said.
“The ultimate goal is to effectively measure the impact of climate change in the ecosystem, for example.”

“The goal is to eventually automate much more of this work, but we are not aiming to replace ships, they are still vital in this endeavour,” he said.

NTNU biologist Geir Johnsen works on a piece of equipment on a remotely operated underwater vehicle (ROV) that was also used on the Runde cruise.
Photo: Glaucia Fragoso, NTNU

For her part, Fragoso sees the value of having an AUV like Harald to help pinpoint where she and other biologists should conduct more detailed sampling.

“Phytoplankton are just not easy to sample because they are constantly responding to an ever-changing environment,” she said.
“This gives us a lot of additional information about how phytoplankton occur in the water column.
And the more information we have, the better.”

As for the mystery of the birds on Runde, Fossum and Johnsen say scientists need to do more research over a longer period.
For example, the timing of food availability is very important for both fish and birds.

“Birds need to find food especially when their chicks are hatching, and the fish need to be the right species and size for seabirds to survive,” Johnsen says.
“Climate change and pollution are now rapidly altering conditions in the marine ecosystem, and we need to know more.”

“We took a snapshot of that area, which tells us something about the current ecosystem at that time,” Fossum added.
“But we’ll need to go back and get another snapshot to detect changes and identify potential causes to say something about why the birds are declining.”

Check out this video for a look at Runde and Harald the smart AUV’s brother Fridtjof in action :


The island of Runde, off the Norwegian coast near the town of Ålesund, is a well known paradise for seabirds, such as puffins.
But in recent years, seabird numbers here and in the North Atlantic have plummeted.
A team of researchers from NTNU and a smart autonomous underwater vehicle named Harald are on the hunt for clues as to why.