From Pulse by John Englander

Images of icebergs melting or the disappearing sea ice in the Arctic are generally associated with rising sea level – a widely-held belief that is simply not true.
Though many of my regular blog readers know this, over the last several years I have presented to hundreds of audiences. 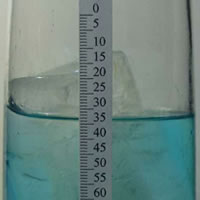 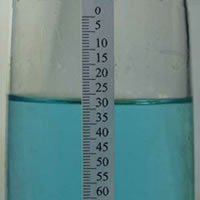 When the freshwater ice melts, it raises the water level.
Freshwater is not as dense as saltwater; so the floating ice cube displaced less volume than it contributed once it melted.

Nearly everyone is surprised to learn that floating ice has no effect on sea level as it melts.
I usually explain it with a reference to Archimedes Principle, or a simple demonstration of ice cubes floating in a glass.
But the other day, talking to a small group in San Francisco, it occurred to me that I often do not explain the science behind why melting ice does not raise water level, so that is my topic for this week. As most substances cool, the molecules become more tightly packed, making the material “denser.”
In a liquid, dense objects sink to the bottom.
Through most of its temperature range, water gets more dense as it cools. 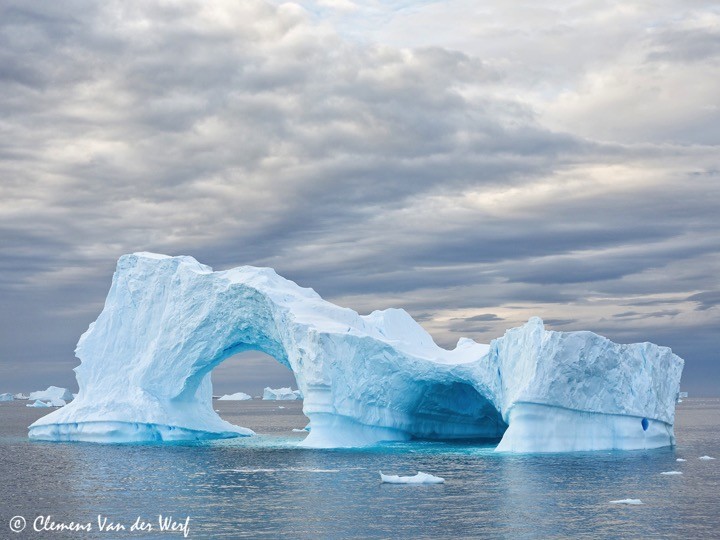 As the Arctic and Antarctic melt, there are more icebergs.
Surprisingly, they do not add to sea level as they melt.
(Photo credit: Clemens Vanderwerf)

So for example, colder water in oceans and lakes will normally be found near the bottom.
However as water cools towards freezing, at about 39 degree Fahrenheit, or 4 degrees Celsius, water does something strange and extraordinary: it gets less dense.
Technically it’s because the totally fluid water molecules which are tightly packed, transform into the very rigid crystal structure of ice, which occupies more space.

In fact ice is almost 9% less dense than the water that forms it.
As a result ice floats.
Saltwater is a few percent more dense than freshwater due to the dissolved minerals, the “salts.” Icebergs that calve off from glaciers are almost pure freshwater, since the glaciers largely result from snowfall.
Thus freshwater icebergs rise even a little more than nine percent above the ocean surface.
This is the typical rule-of-thumb that icebergs are roughly ten percent above the surface and ninety percent below.
As icebergs melt and the water warms back into the “normal” ocean temperature range above 39 degrees F (4 degrees C) the density increases, reducing the volume.

As a result, the actual melting of ice does not add to the level of the water – regardless whether the liquid is your glass of iced tea, or the ocean – though it does defy intuition and seems perplexing.
It is truly one of nature’s phenomena.
Understanding that melting icebergs and even the sea ice in the Arctic Ocean and the marine ice shelves in Antarctica do not add to sea level rise is important in the growing debate and understanding about rising sea level.

At the global level, rising sea level is primarily caused by ice on land melting, mostly from Greenland and Antarctica, either in the form of: meltwater flowing to the ocean, in some cases essentially as rivers, adding to sea level, (just as adding water to a glass adds to the level), or large pieces of ice break off from a glacier and enter the sea, becoming a new iceberg.
Any new icebergs entering the ocean, they do add to sea level adding more than 90% of their volume, (just as adding an ice cube adds to the level of water in a glass).

Another factor in sea level rise, not as obvious as the above two forms, is something called thermal expansion of seawater.
Again referring back to the previous description that warmer substances normally expand, including water above 39 degrees F (4 degrees C) the warming ocean is slightly expanding because global average temperature is now measurably higher.
Average global temperature today is approximately 16 degrees Celsius (60.5 degrees Fahrenheit) an increase of roughly one degree Celsius from the pre-industrial era.

In addition to those global factors of rising sea level, there are regional and local reasons for sea level to change.
Most commonly, land subsidence or uplift – land actually moving downward or upwards, due to movements of the earth’s crust or compaction of silts, can add to or subtract from global sea level rise.
(Examples: Jakarta and New Orleans have had extreme subsidence and higher sea level; Alaska and Scandinavia have generally had land uplifting causing sea level to fall slightly.)

There are many factors that contribute to sea level rise, but melting icebergs and sea ice are not among them.
It is important that we avoid the confusion and keep the world’s focus on what will increase sea level – fundamentally it is the warming global temperature, with the greatest effect being the melting of the glaciers and ice sheets on land, entering the sea as new icebergs or meltwater.