Wave information is crucial for people working at sea, to be able to navigate and operate safely.
A new product based on satellite altimeter data detailing ‘Significant Wave Height' now enables this.

High waves are not only dangerous but can threaten delicate procedures at sea, so wave information is paramount for operating safely and efficiently.
For instance, in oil and gas offshore platform operations, historic data and forecasts of wave heights are vital for the safety of personnel, equipment and the environment.

Marine renewable energy operations and site studies require similar information on waves and ship routing can also be improved by such forecasts.

In physical oceanography, the Significant Wave Height (SWH) is defined traditionally as the mean wave height (trough to crest) of the highest third of the waves.
This mathematical definition of ocean wave height is intended to express the height that would be estimated by a trained observer, capturing the most significant waves over the water surface.

Satellite wave measurements come from two main sources: altimetry and Synthetic Aperture Radar (SAR).
The SWH can be obtained through altimetry and directional and spectral information with SAR.

The Copernicus Marine Environment Monitoring Service (CMEMS) released the first real-time global wave product based on satellite data, broadening its offer—previously based on numerical wave forecast models.
Released in the summer of 2017, this new product from satellite altimeter data contains the Significant Wave Height from Jason-3 and from the Copernicus Sentinel-3A satellite altimeter data, provided within three hours after data acquisition.

CMEMS buoy-based in-situ wave coverage
In-situ wave data, typically provided by buoys, are very helpful to validate satellite wave products but in many areas of open water such buoys are not available, because of the difficulty and costliness of installation and maintenance.
Copyright: processed by INSITU TAC /CMEMS

It provides quality-filtered and inter-calibrated along-track high-resolution SWH (one measurement every 07 km, or every second).
These measurements contribute to global ocean coverage along the satellite ground tracks with 07 km resolution.

Such satellite wave products represent actual measurements of the waves, covering the entire Earth, regularly and homogeneously over several years.
They often offer a better portrayal of extreme events, which numerical models tend to under estimate.

In-situ wave data, typically provided by buoys, are similarly very helpful but in many open-water areas such moored buoys are not available, mainly due to the technical difficulty and cost of installing and maintaining them in deep ocean, far from the coast (see figure). 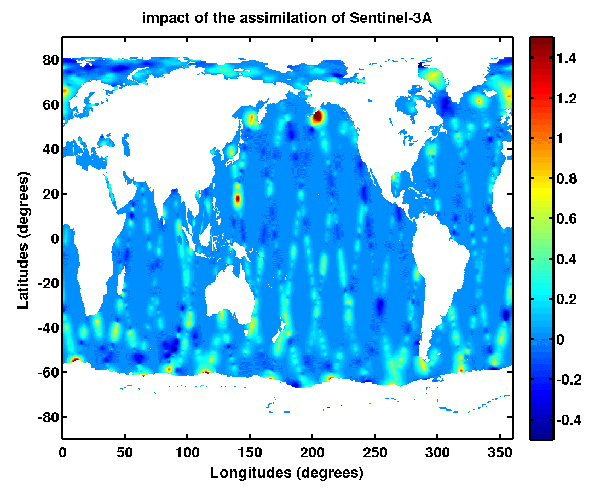 Wave data assimilation
Sentinel-3A wave data assimilation in the CMEMS global wave forecast model has a strong impact in the north-west of the Pacific Ocean related to the typhoon season and in the Gulf of Mexico after Hurricane Harvey.
Analysis increment (in metres) of Significant Wave Height (SWH) after 1-day of assimilation of Sentinel-3A wave data in the CMEMS Global Wave Model MFWAM (starting date on 29 August, 2017 at 06:00 UTC to 30 August, 2017 at 0:00 UTC).
Copyright: Contains modified Copernicus Sentinel data (2017)/ processed by Météo France/CMEMS

Sentinel-3A's wave data are also assimilated into numerical real-time wave models to provide wave forecasts with better accuracy.
For example, assimilation into the CMEMS global wave forecast model has a strong impact in the north-west of the Pacific Ocean related to the typhoon season and in the Gulf of Mexico after Hurricane Harvey (see figure).

Dr Romain Husson, responsible for wave products at CLS for CMEMS, says, "In the first quarter of 2018, CMEMS will also deliver wave products derived from Sentinel-1A and -1B's SAR instrument.
With respect to altimetry, SAR has the unique ability to measure the wave period and direction on top of the SWH and is particularly well suited for long waves, sometimes also referred to as swell."


﻿﻿
This visualisation shows ocean colour in the north Atlantic and along the Iberian coast, caused by Chlorophyll activity from January - July 2017.
Audio commentary is provided by EUMETSAT's remote sensing scientist, Ewa Kwiatkowska.
This data is freely available from the EU’s Copernicus Marine Environment Monitoring Service (CMEMS), operated by Mercator Ocean.

The Sentinels are a fleet of dedicated EU-owned satellites, designed to deliver the wealth of data and imagery that are central to Europe's Copernicus environmental programme.

In partnership with EU Member States, the European Commission leads and coordinates this programme, to improve the management of the environment, safeguarding lives every day.
ESA is in charge of the space component, responsible for developing the family of Copernicus Sentinel satellites and ensuring the flow of data for the Copernicus services, while the operations of the Sentinels have been entrusted to ESA and EUMETSAT.