The bottom of the ocean is sinking

Satellite data enables scientists to map the seafloor, which is sinking under the weight of rising seas. (This map shows gravity anomalies in the western Indian Ocean.)
Credit: NASA Earth Observatory

From Live Science by Mindy Weidberger

The bottom of the ocean is more of a "sunken place" than it used to be.

In recent decades, melting ice sheets and glaciers driven by climate change are swelling Earth's oceans.
And along with all that water comes an unexpected consequence — the weight of the additional liquid is pressing down on the seafloor, causing it to sink.

Modeled barystatic contributions and definition of the individual ocean basins.
(a) Time series of the modeled barystatic sea level changes from each individual process and their sum. The shaded areas show the 1σ confidence interval.
b) Definition of each ocean basin. The dots show the tide gauge locations, and the color the basin to which each tide gauge is linked. The black lines show the upper and lower bounds of the altimetry domain.

Consequently, measurements and predictions of sea-level rise may have been incorrect since 1993, underestimating the growing volume of water in the oceans due to the receding bottom, according to a new study. 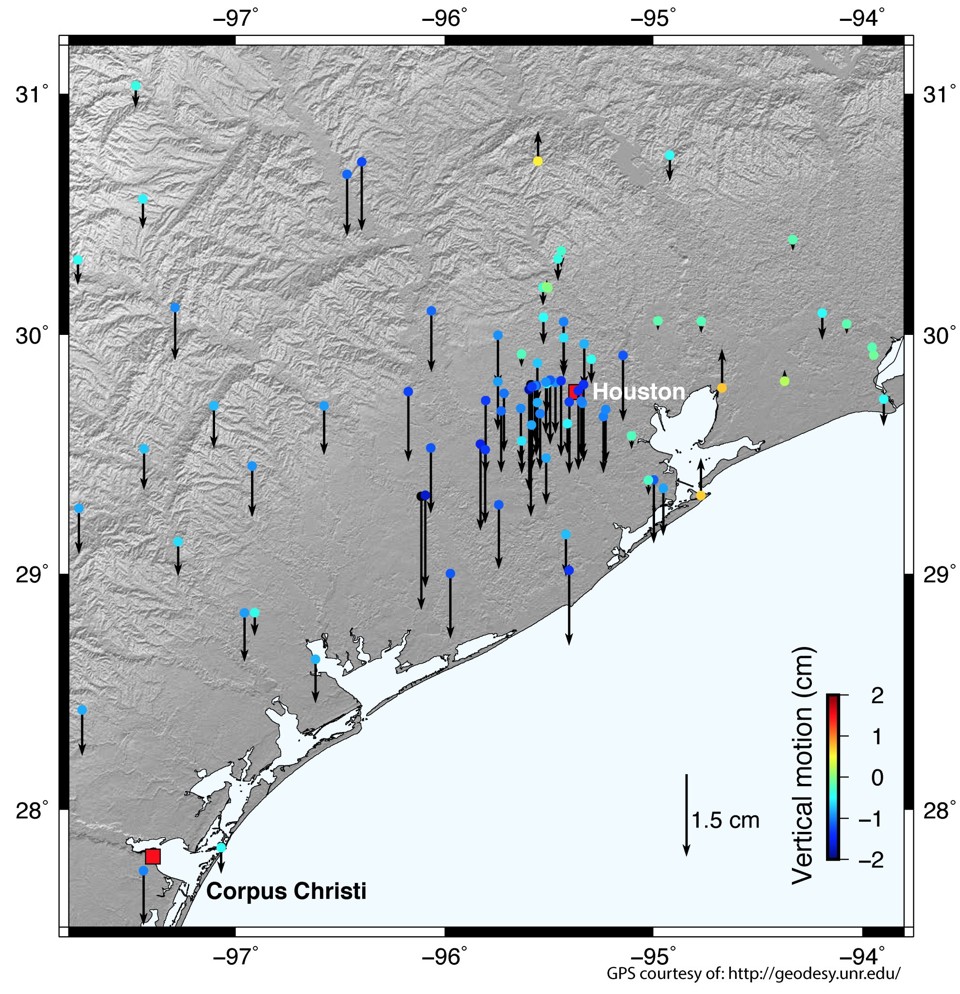 The 275 trillion pounds of water from Hurricane Harvey deformed the ground in Texas.

The weight of Harvey's water pushed Houston down
Scientists have long known that Earth's crust, or outer layer, is elastic: Earlier research revealed how Earth's surface warps in response to tidal movements that redistribute masses of water; and 2017's Hurricane Harvey dumped so much water on Texas that the ground dropped 0.8 inches (2 centimeters), the Atlantic reported.

Linear trends and accompanying 1σ confidence intervals resulting from ice mass and LWS changes over 1993–2014 in (a) solid Earth deformation over the oceans, (b) relative sea level, and (c) geocentric sea level.
Note that geocentric sea level change is equivalent to the sum of relative sea level and ocean bottom deformation change.
The blue line depicts the line where local sea level change is equal to the ocean mean sea level trend, whose value is written in blue under each map.

In the new investigation, researchers looked at more long-term impacts to the seafloor.
They evaluated how much the shape of the ocean bottom may have changed between 1993 and 2014, taking into account the amount of water added to the ocean from liquid formerly locked up on land as ice.
Previous research into seafloor stretching had omitted that extra water, the scientists wrote in the study. 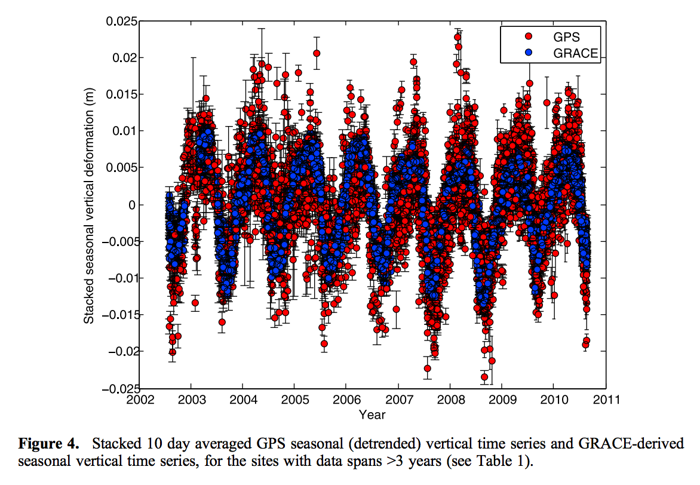 To do that, they reviewed approximations of mass loss on land, as ice melted and drained into the oceans, and compared that to estimates of sea volume changes.
They found that around the world for two decades, ocean basins deformed an average of 0.004 inches (0.1 millimeter) per year, with a total deformation of 0.08 inches (2 mm).

However, there were distinct regional patterns to the seafloor's bending and stretching, and the amount of sag in certain parts of the ocean bottom could be significantly higher — as much as 0.04 inches (1 mm) per year in the Arctic Ocean, for a total of 0.8 inches (20 mm), the study authors reported.

Basin-averaged and global mean effects of present-day mass redistribution on observed relative and geocentric sea level change.
The solid line represents the average spatial signal over each region.
The dashed line (“TG rec”) represents tide gauge reconstructions based on the virtual station method using the locations of the 627 PSMSL tide gauges.
The altimetry domain consists of the global oceans, bounded by ±66∘ latitude.
For the virtual station estimate of the altimetry domain, all regions except the Arctic Ocean region are used.

As a result, satellite assessments of sea-level change — which don't account for a sinking ocean bottom — could be underestimating the amount that seas are rising by 8 percent, according to the study.

The accuracy of future sea-level estimates could be notably improved if the sinking of the ocean floor were incorporated into the calculations, "either based on modeled estimates of ocean mass change, as was done in this study, or using more direct observations," the scientists concluded.

The findings were published online Dec. 23 in the journal Geophysical Research Letters.