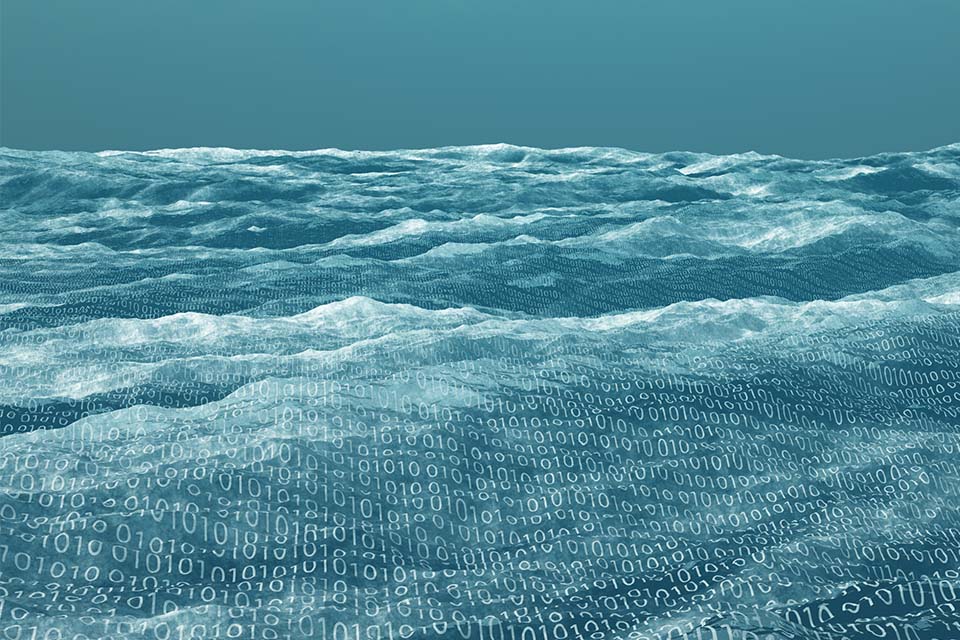 From NewsDeeply by Paul Tullis

DARPA, the U.S. military’s R&D arm, is seeking proposals to deploy as many as 50,000 low-cost sensors across the ocean to gather data on marine conditions, but scientists say that the plan poses a significant technological challenge.

The Defense Advanced Research Projects Agency has had a hand in some of the most transformational innovations of the last half-century, including the computer network that evolved into the internet, the graphical user interface and passive radar.
Now DARPA is seeking proposals for what could be the next big thing: a network of intelligent floats “to enable persistent maritime situational awareness over large ocean areas.”

Artist's cocept of DARPA's Ocean of Things programme.
“We plan to create floating sensor networks that significantly expand maritime awareness at a fraction of the cost of current approaches.”
Credit : DARPA Agency

In other words, the “Ocean of Things,” as the agency describes the initiative.
It’s the marine version of the terrestrial “Internet of Things” – networked devices that communicate information about themselves to their users and to other devices, such as the Nest thermostat, which allows remote control of a house’s heating and air conditioning system, or a refrigerator that tells you when you’re out of milk.
“Head out to most parts of the open ocean, however, and no such capability exists for real-time monitoring of maritime activity,” DARPA noted in a statement.

Each float could collect environmental data such as water temperature, salinity, sea state and location, and detect the presence of vessels and marine mammals, transmitting the information via satellite.
Separately, private companies or academic institutions would develop data analytics software to process and make sense of all those bits.

The infrastructure of the Digital Ocean.
(Courtesy of Liquid Robotics, a Boeing Company)

“It’s great to see someone putting money behind this – particularly DARPA,” said Roger Hine, cofounder and chief technical officer of Liquid Robotics, a Silicon Valley company owned by Boeing that manufactures a self-propelled autonomous robot called the WaveGlider.
Liquid Robotics has proposed a “Digital Ocean” to integrate and connect devices and systems underwater, on the surface and onshore to expand understanding of the two-thirds of the planet that consists of the ocean.
“I’m really excited to see this happen,” Hine added.

The scientific case for collecting the information the Ocean of Things seeks is clear, said Jules Jaffe, a professor at Scripps institution of Oceanography at University of California, San Diego.
Jaffe designed a small swarm of underwater robots as well as the underwater imaging system used to find the Titanic.
Without a clear commercial marketplace, the private sector has lacked incentive to develop the devices and networks DARPA envisions.
“Government support is important,” he said.

A NEMO float, part of the global Argo network of sensors, deployed in the Arctic.
Courtesy of Argo

But Jaffe, Hine and others raised significant doubts about whether DARPA can achieve its program objectives within the constraints it has set.
The call for proposals limits the cost of the floats to $500 a piece, indicating DARPA will acquire 50,000 of them, and asks bidders to use materials “minimizing impact to the marine environment” with “biodegradable packing materials/floats” to the extent possible.

Hine pointed out that a battery sizeable enough to power such a device probably costs around $100, and the Iridium satellite modem DARPA requires is about another $100.
“It doesn’t leave a lot of budget for the actual sensing payload,” he said.

The agency listed salinity as a “potential” component of the suite of sensors, but Jaffe, who has decided not to participate in the DARPA program because “the bigger these [programs] get, the more of a pain in the ass they are,” said the least expensive device that does that costs $1,500.
With a more limited payload, though, “It’s not impossible” DARPA could acquire 50,000 intelligent floats for $500, he said.
“They’re challenging researchers to achieve aggressive goals.”

Another researcher with experience building underwater autonomous vehicles, who didn’t want to be named criticizing DARPA for fear of losing out on future funding opportunities, worries about the environmental impact of the program if it scales up.
Just 50,000 devices won’t provide much resolution of the ocean, so “scale is what makes it worth doing this research,” the researcher said.
“They have electronics, a battery on board. Putting more of them out there, I do worry about the environmental impact of these objects.”

Practical concerns are another obstacle to realizing an “Ocean of Things” as DARPA has defined it, this researcher said: “They’re going to find it really difficult to keep [individual floats] in place.
With a significant weather pattern, large- or small-scale eddies can create vortices so you end up with all the sensors in one location. Then you lose the resolution you’re hoping for.”

Hine agreed that eddies or drifting onshore are among the “significant limitations” to a float with no propulsion mechanism.
“It’s going to require a lot of engineering to make a dirt-cheap piece of electronics that actually does something useful,” he said.

John Waterston, DARPA program manager for Ocean of Things, told Oceans Deeply that, “DARPA is pushing to drive costs down on the individual floats, which is key to being able to deploy in large numbers.”
“With production rates of tens of thousands, DARPA expects that a sound business can be developed,” he added.
“We strongly believe that a well-designed float could be sufficiently modular as to be able to host a variety of sensors [which] can be switched out and usable for a variety of potential customers such as” the National Oceanic and Atmospheric Services, Department of Homeland Security “and even commercial organizations.”

If DARPA is successful, said Ryan Kastner, a UCSD professor of computer science and engineering who builds computer systems for oceangoing robots, “you’ll get an amazingly greater amount of spatial data than we have now – orders of magnitude more.” He estimated that a device that can do some of what the agency hopes would be possible in five to 10 years.
“DARPA can certainly push this sort of thing,” he said.

And that’s just what DARPA should be doing in this area, Hine maintained.
“Not all these questions should be answered at the beginning of a project like this,” he said.
“It’s good to be diving in and seeing where it takes you.”