Bombogenesis : why the bomb cyclone hitting the US East Coast is so unusual

From Wired by Megan Molteni

Now, the first thing you should know about a bomb cyclone is it’s just a name—and unlike a sharknado, it’s not a literal one.
The very real scientific term describes a storm that suddenly intensifies following a rapid drop in atmospheric pressure.
Bombing out, or “bombogenesis,” is when a cyclone’s central pressure drops 24 millibars or more in 24 hours, bringing furious winds that can quickly create blizzard conditions and coastal flooding.

It’s actually not that rare a phenomenon; meteorologists estimate these kinds of storms break out in the Northern Hemisphere about 10 times a year.
They can go by other names, like Nor’easter and mid-latitude cyclone, which may explain why you’ve never heard of one before Winter Storm Grayson started dumping snow in Tallahassee on Wednesday morning.
But Grayson isn’t your typical bombogenerator.

Fourteen of 20 hurricane-force wind events underwent bombogenesis in the North Atlantic during the first two months of 2014.
This unusual activity can be seen in wind speed data from the period.
In this image, blues indicate areas with wind speeds that are faster than the 30-year historical average (1981-2010).
Bombogenesis, a popular term used by meteorologists, occurs when a midlatitude cyclone rapidly intensifies, dropping at least 24 millibars over 24 hours.
A millibar measures atmospheric pressure.
This can happen when a cold air mass collides with a warm air mass, such as air over warm ocean waters.
The formation of this rapidly strengthening weather system is a process called bombogenesis, which creates what is known as a bomb cyclone.

It’s what happens when everything comes together just right (or just wrong).
Grayson is expected to explode up the East Coast between now and Friday, intensifying as it makes its way from Florida to Nova Scotia, blowing record snowfalls around at category 3 hurricane wind speeds.
“This storm is a synoptic meteorologist’s dream,” says Paul Huttner, who watches the weather for Minnesota Public Radio.
“It’s a perfect alignment of the three things we look for.”


The first is a warm conveyor belt of tropical moisture, which the Gulf Stream is shuttling out of the Caribbean and right up the Atlantic coast.
That’s pretty normal for this time of year.
What’s less normal is the huge subzero air mass that dipped down from the Arctic about 10 days ago, plunging the Great Lakes and Eastern US into a sustained deep freeze.

Every year, around this time, the sun stops shining above the Arctic circle.
No radiation means no heat, which means all that air gets real cold real quick.
Most of the time, jet streams—the easterly flowing air currents near the upper reaches of the atmosphere—keep that cold air bottled up in the Arctic.
But sometimes, upper air waves shift, forcing a buckle in the jet stream and allowing all that air to spill southward. 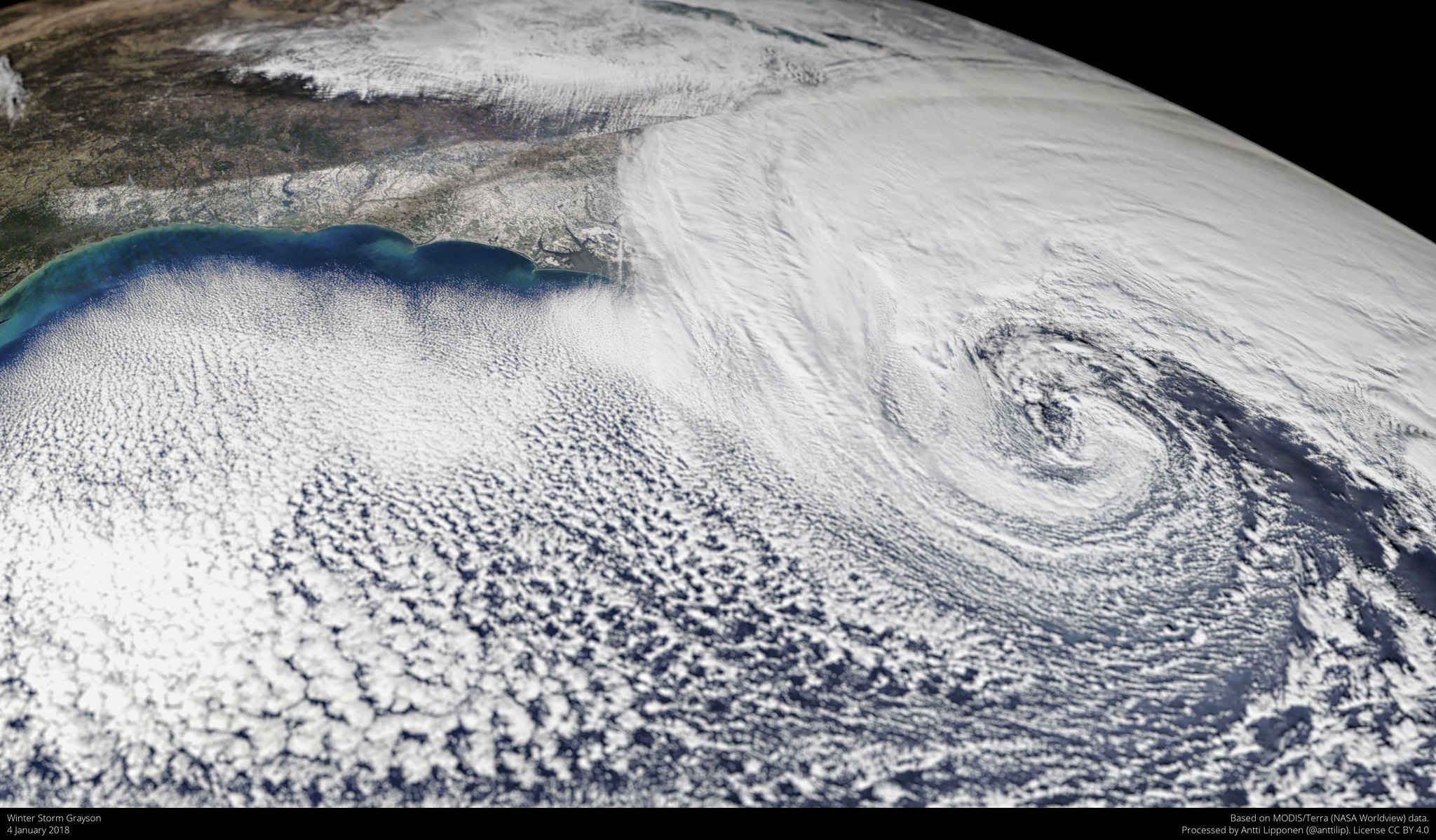 Differences in temperature, you see, lead to differences in pressure.
As the pressure drops, air rushes in.
The faster it drops, the faster the air moves.
And thus, a winter storm is born.

Unlike hurricanes, which slow down as they head north and get away from the moist heat of the ocean, bomb cyclones tend to reach their peak intensity when they hit New England.
That’s where the maximum temperature contrast usually is.
It’s also where the third thing meteorologists look for—a low pressure trough in the upper levels of the atmosphere—happens to be occurring right now.


NOAA scientists are estimating that Grayson will wind up dropping between 60 and 70 millibars over 48 hours, ending Thursday evening near Nova Scotia.
Not only would this be one of the most rapid rates of bombogenesis associated with an East Coast storm, but with its central pressure expected to bottom out near 950 millibars, it puts Grayson among the strongest offshore storms in recent history.
(For comparison, Nor’easters such as Nemo, Juno, and Stella didn’t dip below 970 mb.)

This is leading to faster and stronger winds than you’d typically see in a storm this time of year, says Gregg Galina, a meteorologist with NOAA’s Weather Prediction Center.
He’s been monitoring Grayson from the agency’s outpost in College Park, Maryland, which was just starting to get some snow and light winds by 9pm Eastern time Wednesday.
It’s the first winter storm to really test out NOAA’s new GOES-16—its most advanced weather satellite ever—which first locked into position over the US in December.

GOES-16 scans the Earth five times faster than previous sats, sending back images every 15 minutes.
That, along with new ozone-measuring capability, helps Galina forecast the storm’s impact.
The compound acts as a kind of tracer for low pressure pulling down on the stratosphere, and gives an idea about the vorticity—or the spin—of the atmosphere.
“It’s kind of like an ice skater spinning with her arms out,” says Galina.
“As she brings them closer to her body she spins faster.
It’s the same in a cyclone; the increased spin tightens the wind field.”

Galina and others on his team will be feeding satellite data into their models over the next few days to predict what Grayson has in store.
And they’ll also use data collected from inside the eye of the storm.
On Wednesday afternoon, a military air crew loaded up a WC-130J Super Hercules with about 30 dropsondes—parachute-equipped weather sensors—and took off from Keesler Air Force Base in Biloxi, Mississippi headed straight into the storm’s path.
Over the next 10 to 12 hours, they released the sensors into the frozen gale, and as they fell they sent back real-time readings on air pressure, temperature, humidity, wind direction, and speed.

Hearing the word "bombogenesis" and confused about it? Here's an explanation and how it relates to the upcoming East Coast storm. Stay tuned for forecast updates and read our key messages for this storm in our short range discussion: https://t.co/VNkruevXS6 pic.twitter.com/iwfR3CRcNd
— NWS WPC (@NWSWPC) January 3, 2018


All of this is necessary because there’s still a ton scientists don’t know about winter storms.
In particular, how much of a power boost they draw from rapidly-warming oceans.
“The global ocean is as warm now as it has ever been,” says Kevin Trenberth, a senior scientist at the National Center for Atmospheric Research.
“The main consequence of that is that winter storms can dump much bigger snowfalls if they combine with cold air, like the kind coming down on the Montreal Express right now.”

And at least according to some climate scientists, this pattern is likely to repeat itself even more in the future.
Rutgers climatologist Jennifer Francis is one of a growing number of researchers who believe that the warming Arctic will leave less of a temperature difference between the equators and poles, weakening the jet stream.
A weaker jet stream would allow cold air to push down, or warm air to wander north, more frequently, setting up more opportunities for a violent atmospheric showdown.
“We expect these patterns to become more frequent, but they may align differently in different years,” says Francis.

Others are less sure.
Kerry Emanuel, an atmospheric scientist at MIT, notes that as you go higher up into the atmosphere, the opposite trend is true: The tropics are warming faster than the poles, 10 miles up.
“Winter storms depend on both surface temperature and higher up in the atmosphere,” he says.
“The models are all over the place about whether these are going to get more or less intense.
Frankly, it’s an unsolved problem in the field.”

Researchers will have to wait until Grayson runs its course to know for sure whether it’s a record-breaking storm.
And a little bit longer to find out if “record-breaking” is just the new normal.