Torrey Canyon Disaster (1967)
The UK’s biggest ever oil spill in 1967 taught invaluable lessons about the response to disasters, toughened up shipping safety and stirred green activism

“I saw this huge ship sailing and I thought he’s in rather close, I hope he knows what he’s doing,” recalled Gladys Perkins of the day 50 years ago, when Britain experienced its worst ever environmental disaster.
The ship was the Torrey Canyon, one of the first generation of supertankers, and it was nearing the end of a journey from Kuwait to a refinery at Milford Haven in Wales.
The BP-chartered vessel ran aground on a rock between the Isles of Scilly and Land’s End in Cornwall, splitting several of the tanks holding its vast cargo of crude oil. 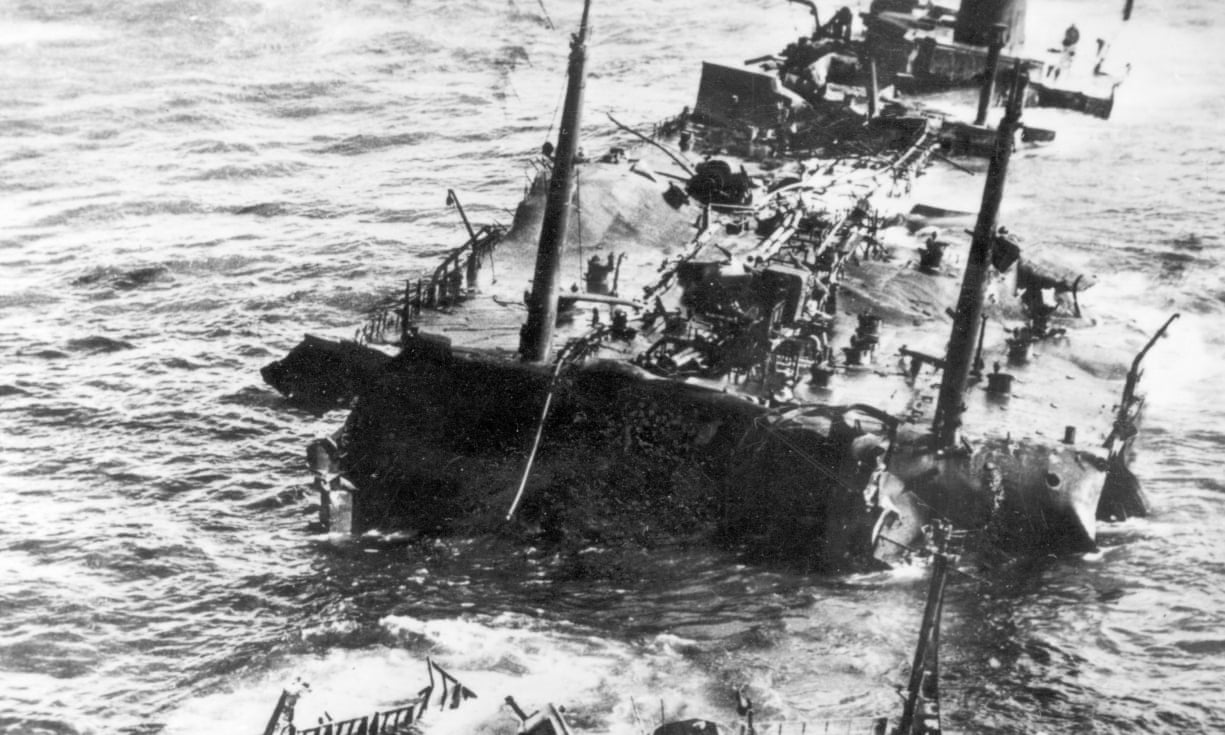 The stricken oil tanker Torrey Canyon two days after she stuck fast on the notorious Seven Stones Reef, near the Isles of Scilly and Land’s End.
Photograph: Staff/AFP/Getty Images

“I just could not believe it. They’d hit the Seven Stones [reef] in broad daylight,” said the 90-year old resident of St Martin’s, the northernmost of the isles.
What followed that night was an oil spill eight-miles long which grew to 20 miles long within 24 hours, and later hit hundreds of miles of coastline. 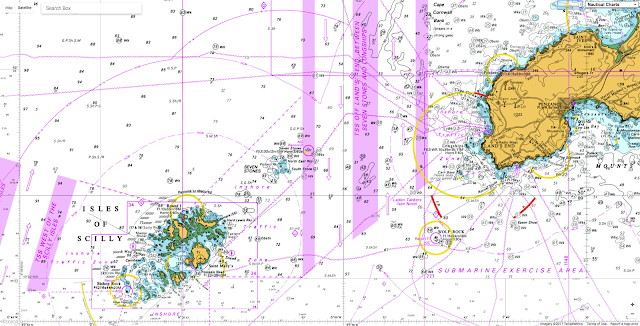 Following a navigational error, Torrey Canyon struck Pollard's Rock on Seven Stones reef between the Cornish mainland and the Isles of Scilly on 18 March 1967.
The tanker did not have a scheduled route and as such lacked a complement of full scale charts of the Scilly Islands. To navigate the region, the vessel used LORAN, but not the more accurate Decca Navigator.
Torre Canyon geographical position with the GeoGarage platform (UKHO chart)

It remains Britain’s biggest oil spill at up to 117,000 tonnes, or 1,231-times more than the amount leaked by a BP North Sea platform last year.
The ripples from the spill are still felt 50 years on.
An unknown quantity of the oil remains in a Guernsey quarry, where spill response teams carry out a training exercise each year. 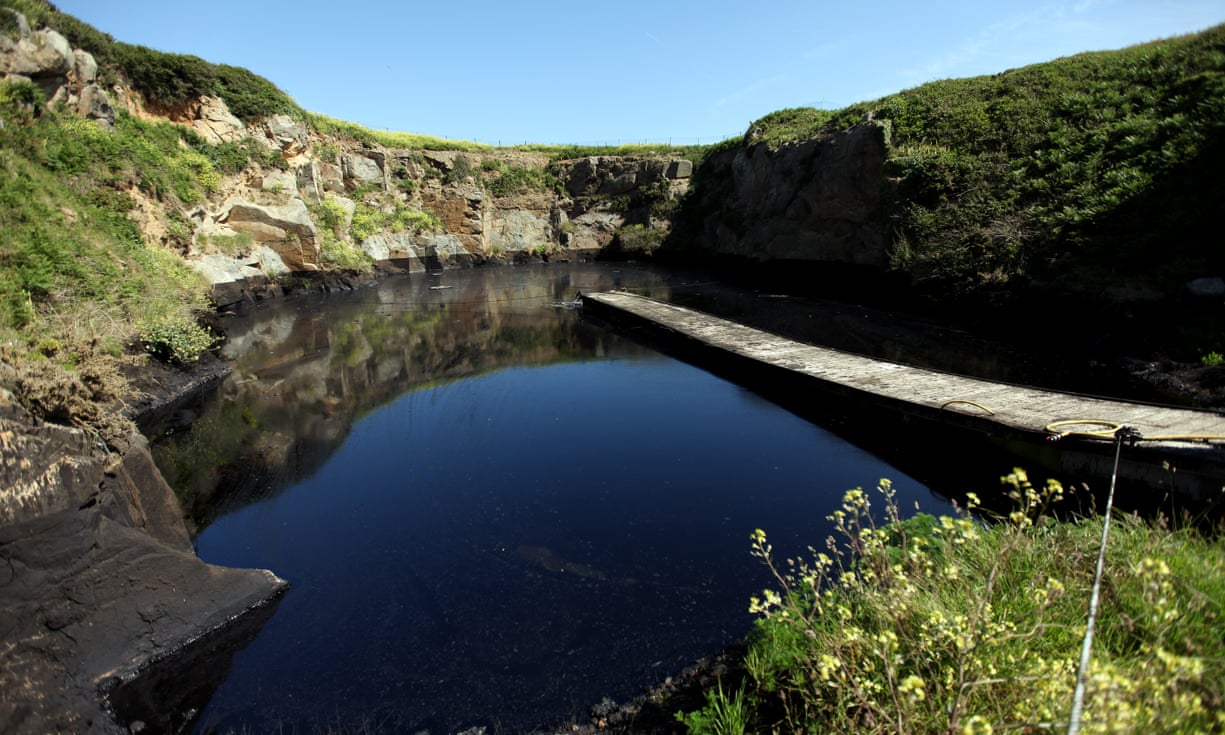 Much of the oil that washed up on Guernsey was pumped into an old quarry, fenced off to the public and used today to train disaster response teams.
Photograph: Graeme Robertson for the Guardian

Today’s Department for Environment, Food and Rural Affairs and the environmental groups with millions of members are also partly a product of the incident.
So is the way that authorities react to spills, and the shipping industry’s modern failsafe measures.
At the time, the crisis ignited an incredible chain of responses.
The government, led by prime minister and Scilly Isles holidayer Harold Wilson, unleashed RAF bombers to sink the wreck and released thousands of tonnes of detergent that proved toxic to marine life.
“The cure was worse than the malady,” said Stephen J Hawkins, a scientist at the Plymouth-based Marine Biological Association, which studied the spill’s impact on wildlife and habitats.
“Today people are better prepared. Then, people didn’t know, they were making it up as they went along.” 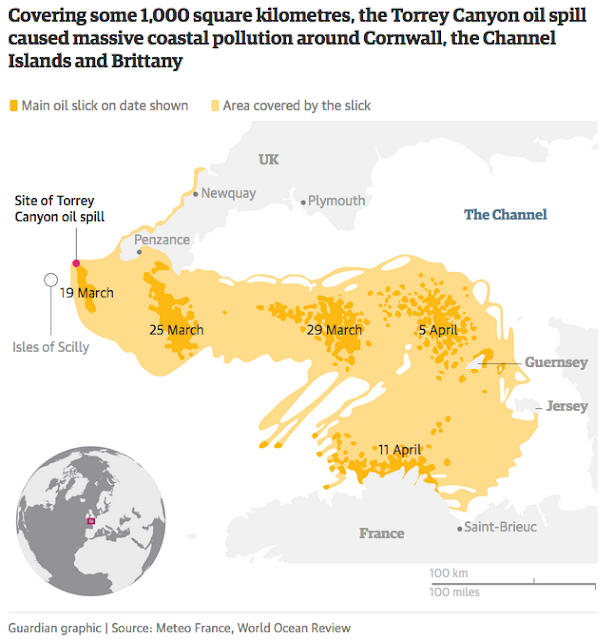 Initially it was thought the ship could be salvaged, a prospect supported by its owners, the Bahama-based Barracuda Tanker Corporation.
Later, the home secretary, Roy Jenkins, said ministers considered towing it to to the mid-Atlantic and sinking it.
Eventually, they decided the best way of stopping the oil pollution was to bomb and sink the stricken vessel.
Ten days after the supertanker began leaking, on 28 March, Buccaneer bombers took off with the mission of sending the Torrey Canyon to the seabed.
“From the hill at the back of St Martin’s we had a grandstand view of these planes going over. Then there was a huge pall of horrible, black smoke,” said Perkins. 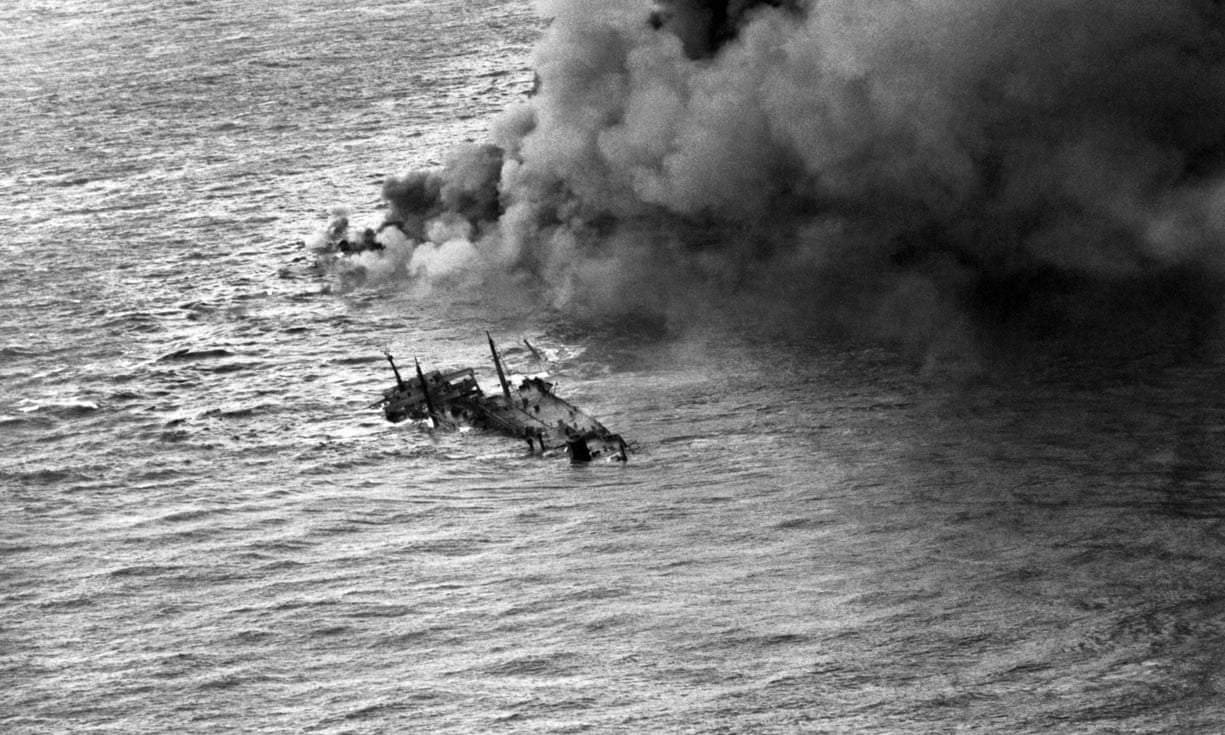 Only 23 of the 41 1,000lb bombs dropped in Operation Oil Buster actually hit the huge target. However, “the navy made an efficient job of it, providing a ‘spectacular’ not seen since the war,” wrote Guardian reporter, Dennis Barker, who passed away in 2015.

Perhaps most spectacular of all, the RAF Buccaneers were followed by Hawker Hunters and Sea Vixens, and napalm was dropped in an effort to burn off the oil.
The resulting “ring of fire” sent up a three-mile smoke plume that it was reported could be seen 100 miles away.
Finally, on 30 March, the ship began to sink.
The government also poured 10,000 tonnes of a BP-manufactured “detergent”, a crude first generation dispersant, into the sea and on the shore. In some cases, barrels of the stuff were literally rolled off cliffs.
“BP, whose oil it was, was selling detergent in industrial quantities which was getting poured over the beaches, killing off the microorganisms which would have broken down the oil,” said Tony Soper, now 88, who reported on the story for the Western Morning News.
Hawkins, who has just this week been taking samples at Porthleven in West Cornwall, found that areas where the detergents were not used, because of concerns over seals, recovered in two to three years, compared with the 13-14 years where the detergents were deployed. 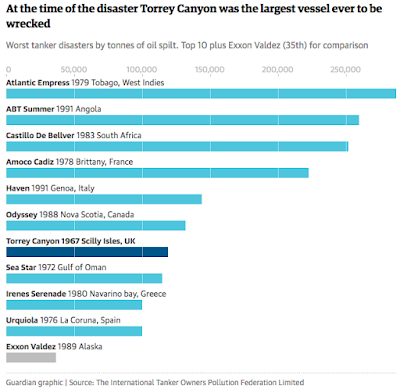 “By the time the oil got to Guernsey, they didn’t treat things with dispersant. They learned from the lessons,” said Hawkins.
In total, hundreds of miles of coastline were affected by the oil spill, and about 15,000 seabirds are thought to have died. Soper said: “The tidal edge of the beaches in West Cornwall was simply covered by a thick carpet of black goo. It was a pretty fearsome smell.”
While the wildlife has recovered in the decades since, some of the disaster’s consequences are felt even now.
Some experts draw a direct line between the incident and the creation in 1970 of the government’s environment department, the first of its kind in the world.
Dr Rob Lambert, environmental historian at the University of Nottingham, said: “Torrey Canyon led inexorably in a way to the Department for the Environment. It was a recognition that the environment had risen up to the top of the political agenda.” 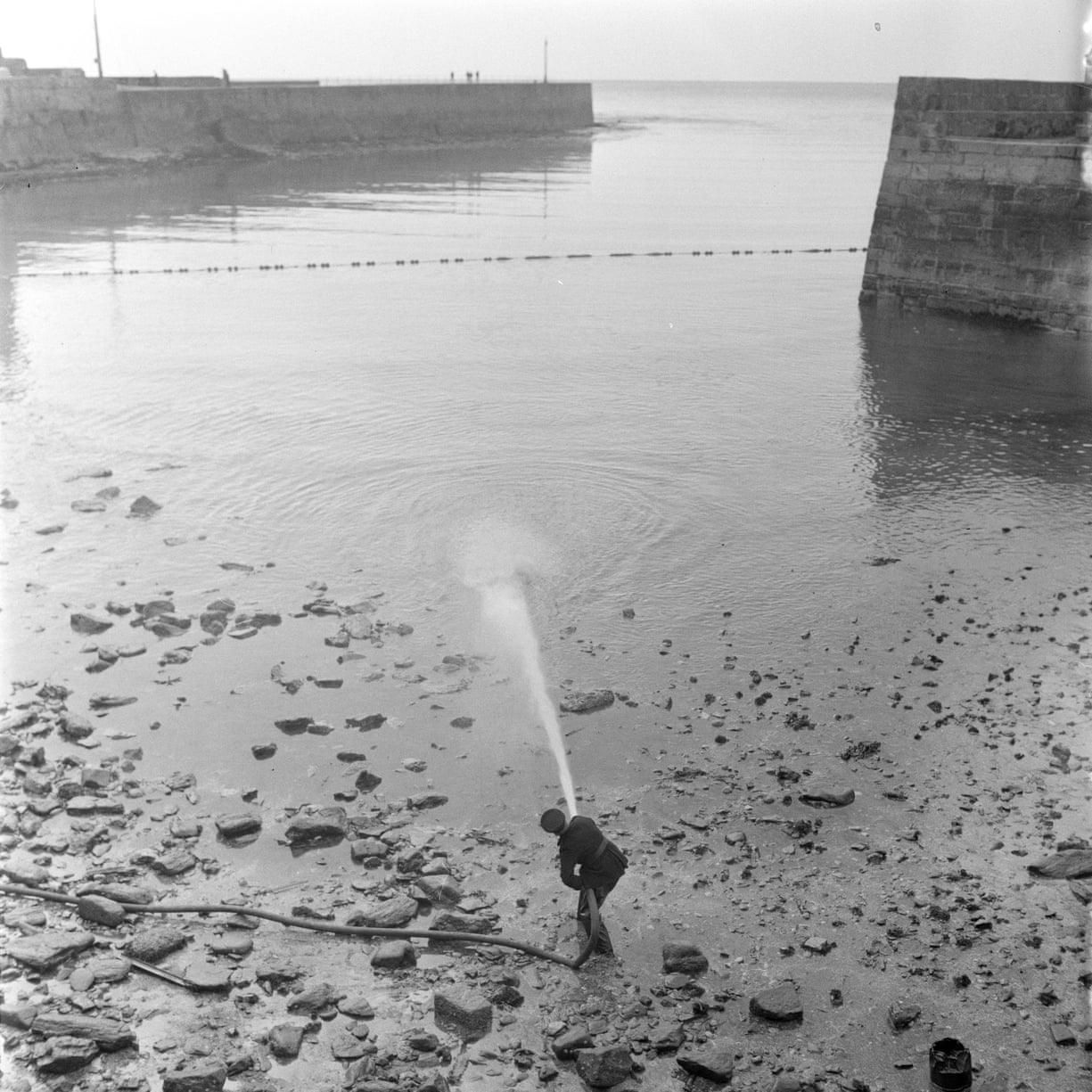 Dispersant sprayed into the harbour.
Photograph: Jane Bown for the Observer

Lambert also credits the incident with sparking the first big rush of environmental volunteering. People travelled from Bristol and further afield in an attempt to clean birds, in sinks at hairdressers, at dedicated animal rescue centres and reportedly even in prisons.
“We take eco volunteering as normal now, but this was the first big example in Britain. The tragedy was that most of these birds were beyond help and they died,” said Lambert.
Torrey Canyon made household names of some environmentalists, including a Durham University botany and ecology lecturer called David Bellamy. 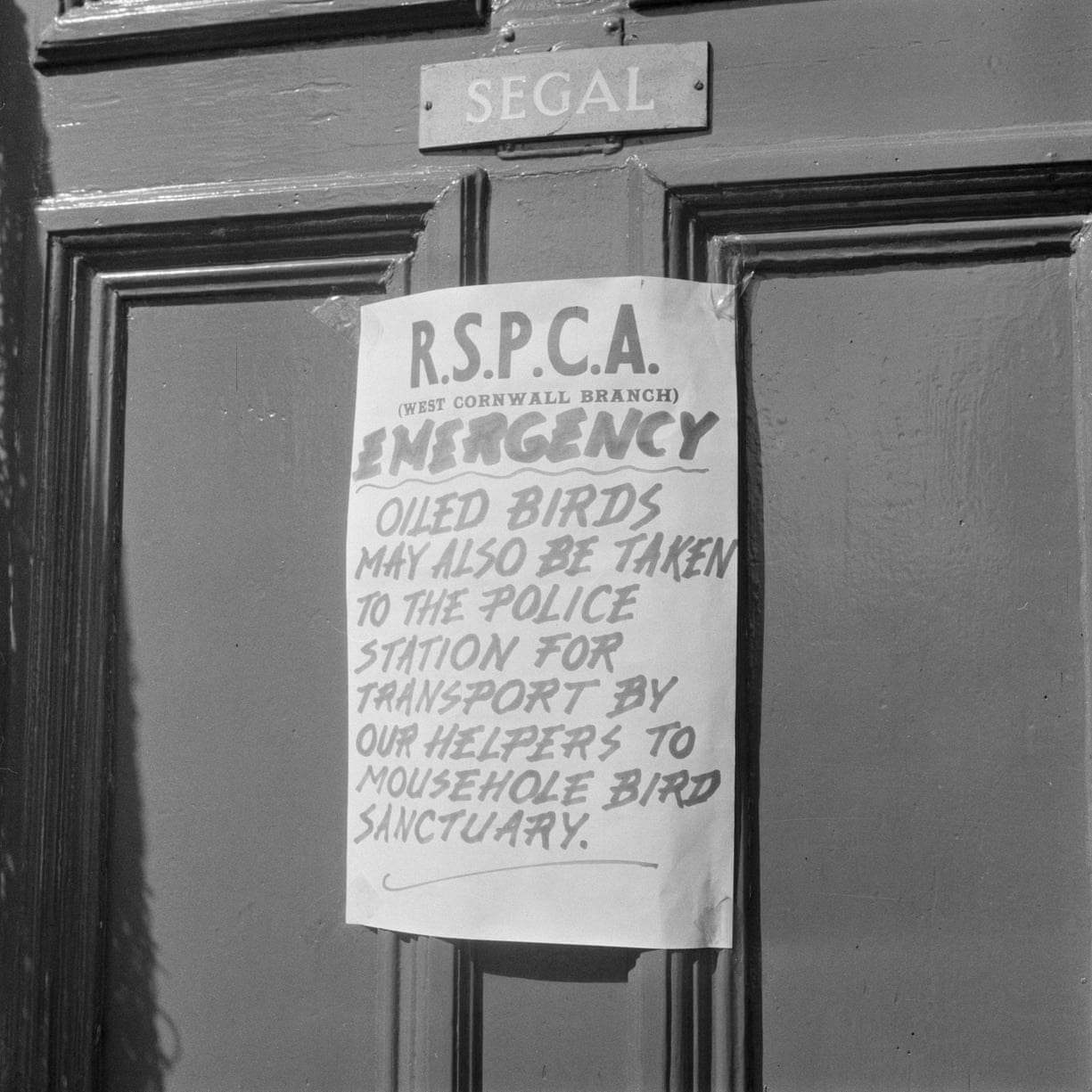 An RSPCA notice in Cornwall informs people where to take injured birds.
Photograph: Jane Bown for the Observer

The 84-year broadcaster said of the disaster: “Many lessons were learnt and are still being learnt. It was probably the first time that words like environment and conservation were voiced on the media, later to become so commonplace.”
He remembers coming to public notice after being interviewed on TV by John Craven.
Government and industry responses to oil spills are much better today, partly as a result of Torrey Canyon, according to Hawkins.
Oil spill contingency plans, something that did not exist in 1967, are in place around the coast.
On rocky coasts, spilled oil is considered best left alone, while in more vulnerable areas such as salt marshes, booms are deployed.
The dispersants deployed are much less toxic, and rarely used at the shore.
“The response is much more proportionate now,” said Hawkins. 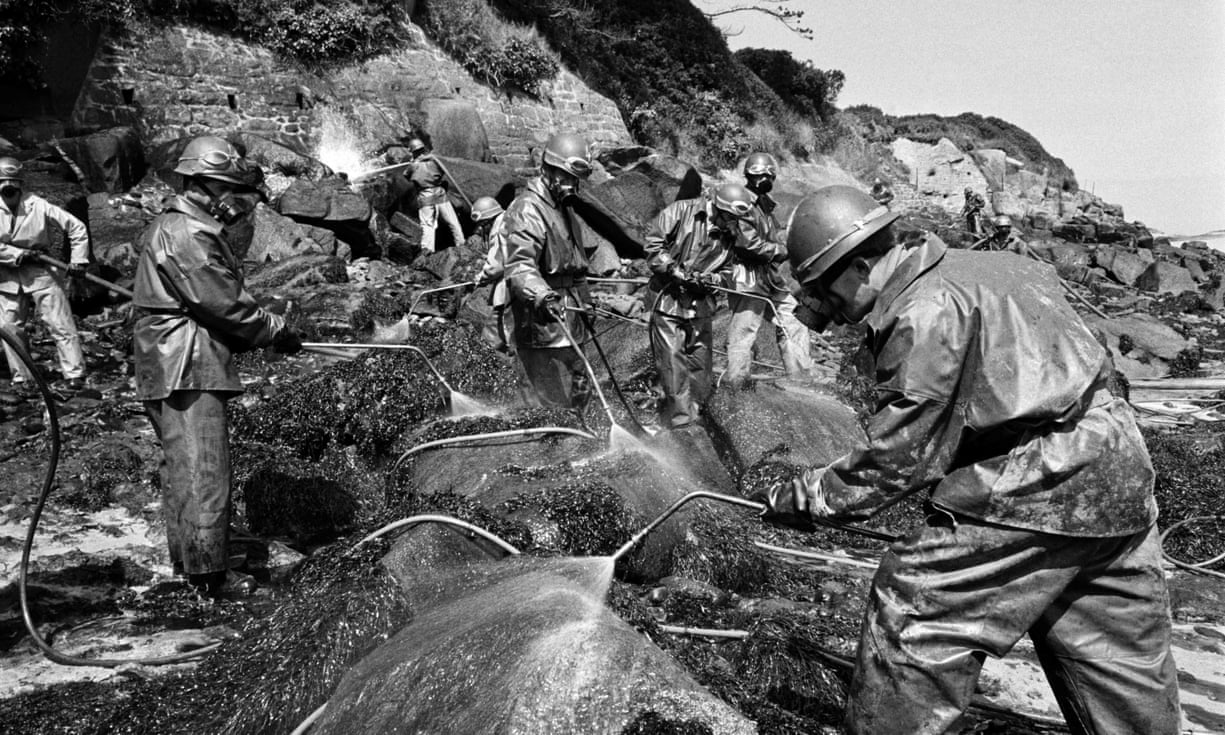 Soldiers clean up the oil slick on the beach of Perros-Guirec.
Photograph: -/AFP/Getty Images

The International Maritime Organization said that many of the measures to prevent a spill employed by today’s shipping industry, such as double hulls and duplicate navigation controls, can be traced back to the disaster of 1967.
Industry statistics show the number of shipping spills worldwide is down 90% since the 1970s; 99.9% of crude oil last year was delivered safely.
While Torrey Canyon’s physical impact has virtually disappeared, there is one place it lives on, in the English Channel.
Nineteen days after the tanker ran aground, the oil reached Guernsey’s beaches, sparking an emergency operation to scoop it up and send 3,000 tonnes of it, mixed with sand, to a granite quarry on the island. 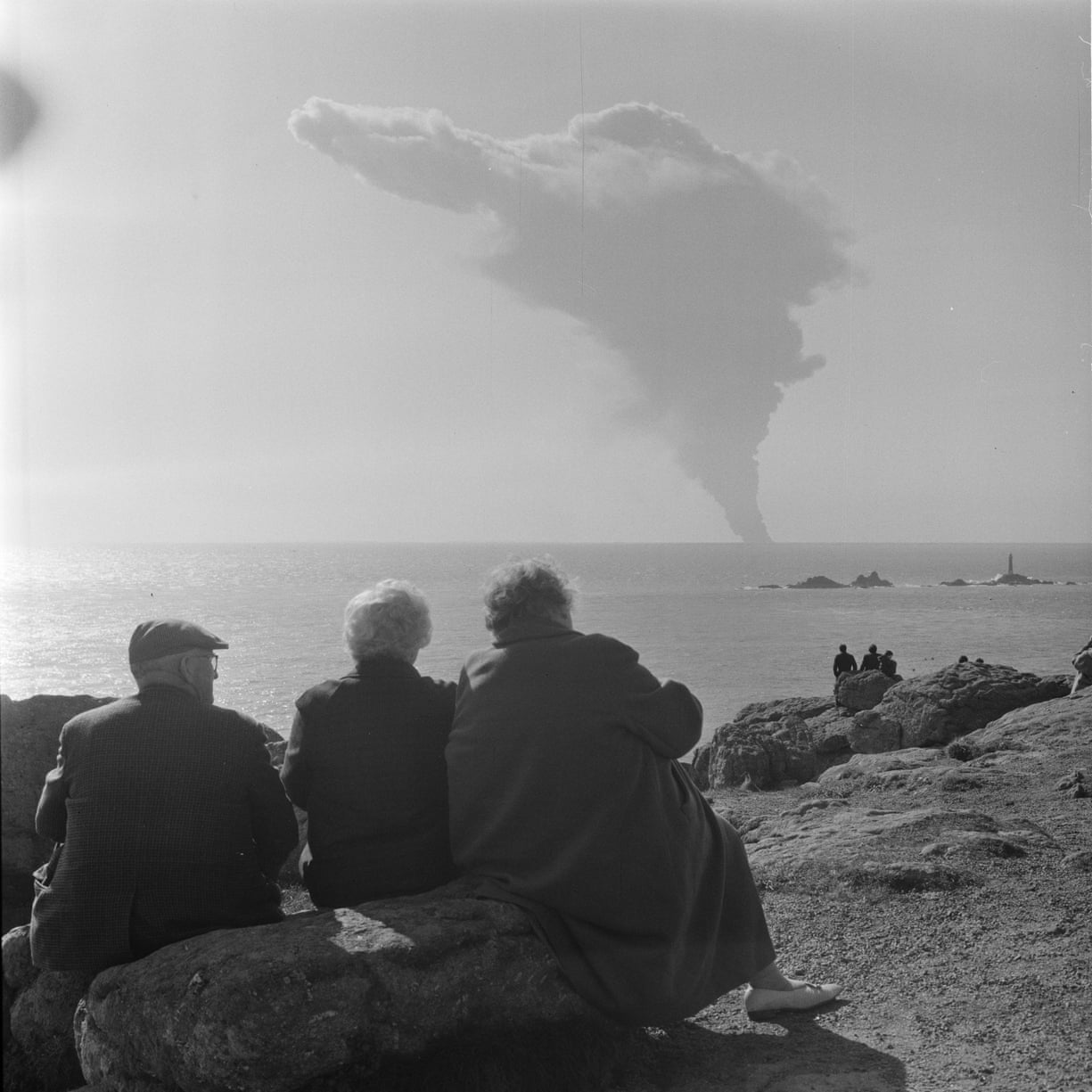 Onlookers watch the distant bombing of the stricken Torrey Canyon.
Photograph: Jane Bown for the Observer

Some of the oil was later recovered and burned for power in the 1980s, but most sat in the quarry’s waters, occasionally coating guillemots in oil.
Eventually, micro-organisms were deployed in 2008 to munch the oil, but after a large quantity of oil surged to the surface in 2009, more extreme measures were called for.
In total, 160,000 litres of contaminated water was removed by buckets – but an unknown quantity of the Torrey Canyon’s oil still remains below the surface.
“It’s just looking like a pond now,” said Steve Byrne, manager of the GSPCA animal shelter, which has had no reports of oiled birds since 2012.
“We had been called out for 45 years to help them, so it’s great news.”