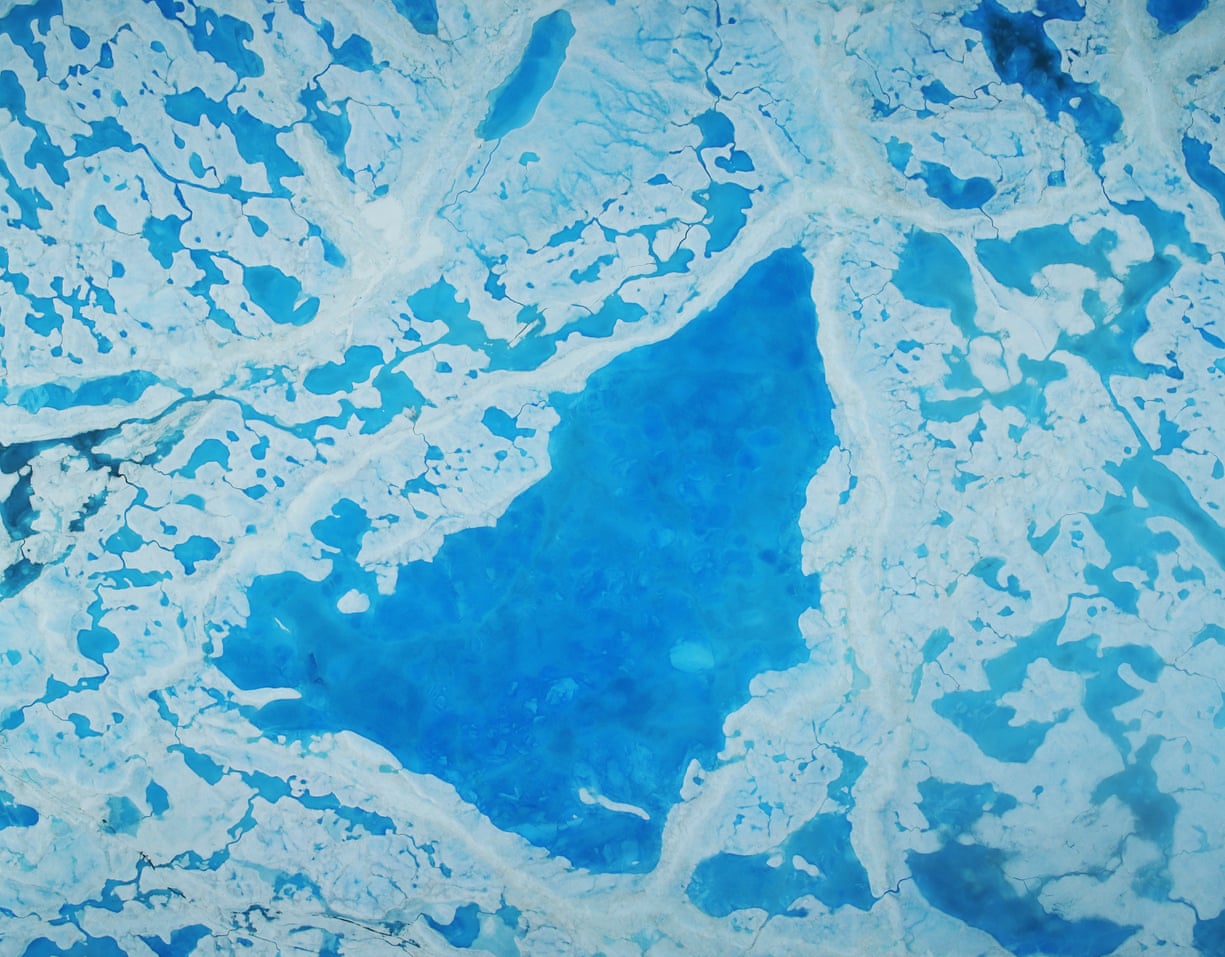 A large pool of melt water over ice on top of the Beaufort Sea in the Arctic Ocean.
Photograph: Operation IceBridge/Nasa

The Arctic is experiencing extraordinarily hot sea surface and air temperatures, which are stopping ice forming and could lead to record lows of sea ice at the north pole next year, according to scientists.
Danish and US researchers monitoring satellites and Arctic weather stations are surprised and alarmed by air temperatures peaking at what they say is an unheard-of 20C higher than normal for the time of year. 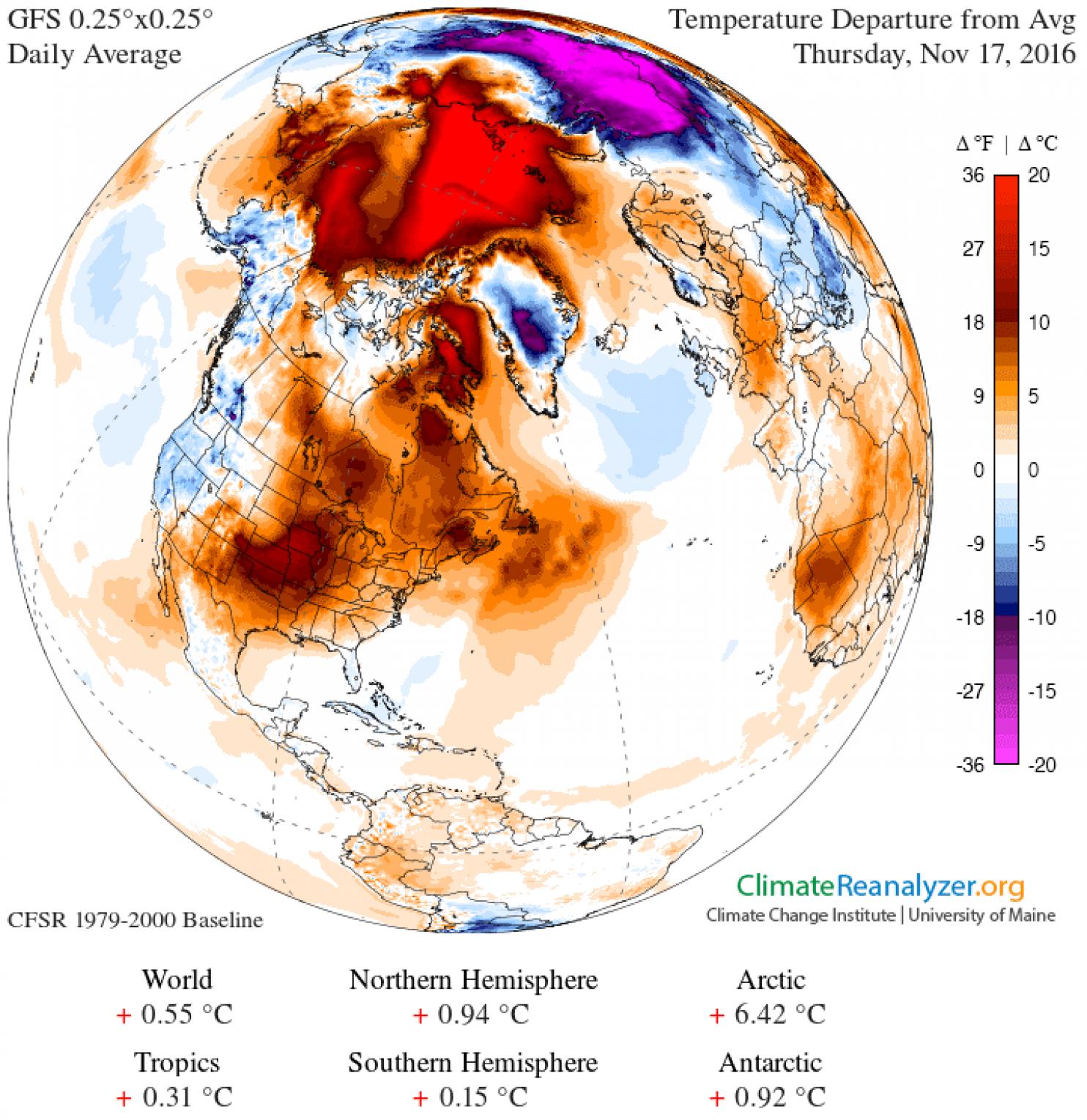 In addition, sea temperatures averaging nearly 4C higher than usual in October and November.
“It’s been about 20C warmer than normal over most of the Arctic Ocean, along with cold anomalies of about the same magnitude over north-central Asia. This is unprecedented for November,” said research professor Jennifer Francis of Rutgers university.
Temperatures have been only a few degrees above freezing when -25C should be expected, according to Francis.
“These temperatures are literally off the charts for where they should be at this time of year. It is pretty shocking. The Arctic has been breaking records all year. It is exciting but also scary,” she said. 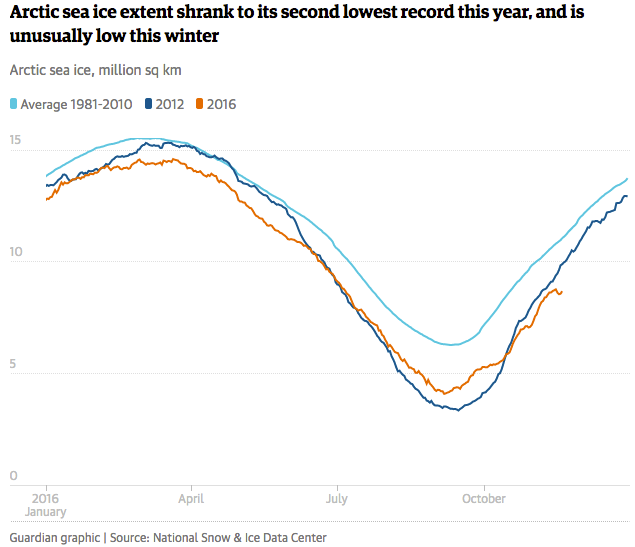 Francis said the near-record low sea ice extent this summer had led to a warmer than usual autumn. That in turn had reduced the temperature difference between the Arctic and mid-latitudes.
“This helped make the jet stream wavier and allowed more heat and moisture to be driven into Arctic latitudes and perpetuate the warmth. It’s a vicious circle,” she added.
Sea ice, which forms and melts each year, has declined more than 30% in the past 25 years.
This week it has been at the lowest extent ever recorded for late November.
According to the US government’s National Snow and Ice Data Centre, (NSIDC), around 2m square kilometres less ice has formed since September than average.
The level is far below the same period in 2012, when sea ice went on to record its lowest ever annual level.
Francis said she was convinced that the cause of the high temperatures and ice loss was climate change.
“It’s all expected. There is nothing but climate change that can cause these trends. This is all headed in the same direction and picking up speed.”
Rasmus Tonboe, a sea ice remote sensing expert at the Danish Meteorological Institute in Copenhagen, said: “Sea surface temperatures in the Kara and Barents seas are much warmer than usual.
That makes it very difficult for sea ice to freeze.

Time lapse of the relative age of Arctic sea ice from week to week since 1990.
The oldest ice (9 or more years old) is white. Seasonal ice is darkest blue.
Old ice drifts out of the Arctic through the Fram Strait (east of Greenland), but in recent years, it has also been melting as it drifts into the southernmost waters of the Beaufort Sea (north of western Canada and Alaska).
Video produced by the Climate.gov team,
based on data provided by Mark Tschudi, University of Colorado-Boulder.


“When we have large areas of open water, it also raises air temperatures, and it has been up to 10/15C warmer. Six months ago the sea ice was breaking up unusually early. This made more open water and allowed the sunlight to be absorbed, which is why the Arctic is warmer this year,” he said.
“What we are seeing is both surprising and alarming. This is faster than the models. It is alarming because it has consequences.”
Julienne Stroeve, the professor of polar observation at University College London said ice that should be growing at this time of year was retreating.
“It’s been a crazy year. There is no ice at Svalbard yet. In the last few days there has been a decline in sea ice in the Bering sea. Very warm air has flooded into the Arctic from the south, pressing the ice northwards.
“Air temperature drives the formation of the ice. It has been really delayed this year so the ice is also much thinner than it usually is. The speed at which this is happening surprises me. In the Arctic the trend has been clear for years, but the speed at which it is happening is faster than anyone thought,” said Strove.
“Ice is very sensitive to weather. There is a huge high pressure over the Kara sea, and Eurasia and Canada. We are seeing very strong winds bringing warm air north.”
The significance of the ice forming late is that this affects its growth the following year, with consequences for climate.
“Extreme wind and high air temperatures [now],” she said, “could see ice extent drop next year below the record 2012 year”.
She added: “The ice could be even thinner than it was at the start of 2012. This is definitely a strange year.”
Ed Blockley, the lead scientist of the UK Met Office’s polar climate group, said: “The sea ice is extremely low. It is freezing but very slowly
Last week the Barents sea reduced its ice cover.
There was less ice at the end than the start.
“These temperature anomalies are not unprecedented but this is certainly extraordinary. We are seeing a continual decline in ice. It it likely to be a hiccup but it puts us in bad starting position for next year.”