Last week, the nation focused its attention on the 10-year anniversary of Hurricane Katrina, the most destructive hurricane in U.S. history.
As bad as the storm was, though, it wasn’t the worst storm that could have possibly hit New Orleans.

That’s true of many, many other places, too.
And now, in a new study in Nature Climate Change, Princeton’s Ning Lin and MIT’s Kerry Emanuel demonstrate that when it comes to three global cities in particular — Tampa, Fla., Cairns, Australia, and Dubai, United Arab Emirates — there could come a storm that is much worse than anything in recent memory (or in any memory).
Granted, these theoretical storms are also highly unlikely to occur — in some cases, they are 1-in-10,000-year events, or even rarer.
The researchers refer to these possible storms as “gray swans,” riffing on the concept of a “black swan” event, an unpredictable  catastrophe, or highly impactful event.
A “gray swan,” by contrast, can indeed be predicted, even if it is extremely rare.
The purpose of the study is “to raise awareness of what a very low probability, very high impact hurricane event might look like,” said Emanuel.
The gray swan storms were generated by a computer model that “coupled” together, in the researchers’ parlance, a very high-resolution hurricane model with a global climate model.
That allowed the researchers to populate the simulated world with oodles of different storms.

“When you do hundreds and hundreds of thousands of events, you’re going to see hurricanes that are unlike anything you’ve seen in history,” said Emanuel, a key theoretician behind the equations determining the “maximum potential intensity” of a hurricane in a given climate.
Indeed, he has published in the past that a theoretical “hypercane” with winds approaching 500 miles per hour is possible in scenarios where an asteroid hits the Earth and radically heats up ocean waters, far beyond their normal temperature.
So what did the researchers see? 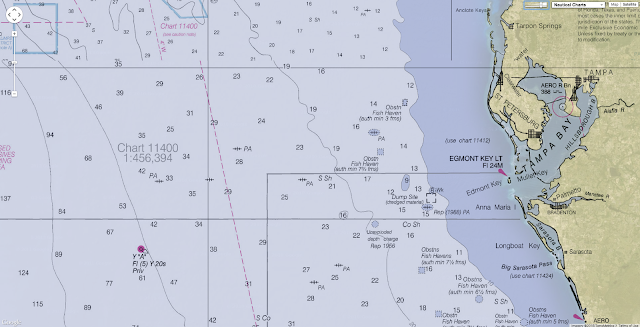 Tampa Bay with the GeoGarage platform

Let’s take Tampa Bay, first.
It hasn’t been hit by a major hurricane since 1921 — but that storm drove a 3- to 3.5-meter (10- to 11-foot) storm surge and caused dramatic damage.
Earlier, in 1848, another storm produced a 4.6-meter surge (about 15 feet).
Why is Tampa Bay so vulnerable?
Check out any good map that shows the water depth (the bathymetry) around the Florida peninsula. It’s deep off the east coast.
But there’s an extraordinarily broad continental shelf off the west coast. 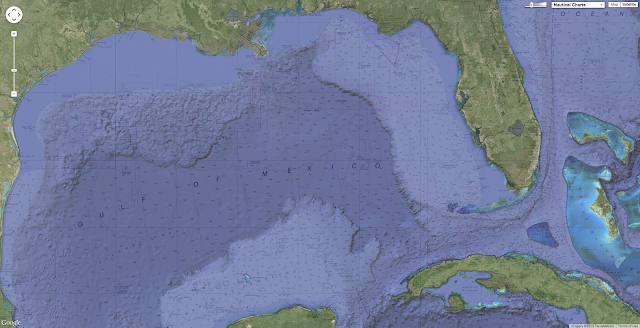 Gulf of Mexico with the GeoGarage platform

And although the city of Tampa, proper, sits at the head of Tampa Bay, relatively far from the mouth and well removed from the barrier islands that get battered by the waves from the Gulf of Mexico, that’s a more vulnerable spot than you’d think.

“One can get much larger surges where the offshore waters are shallow, as is true along the west, but not the east coast of Florida.
Also, surges can amplify by being funneled into bays,” Emanuel said Monday in an e-mail.
The new method allows the researchers to show that a worse storm than these historical examples is possible, especially with sea level rise and global warming.
They simulated 2,100 possible Tampa Bay hurricanes in the current climate, and then 3,100 each for three time periods (2006 through 2036, 2037 through 2067, and 2068 through 2098) in an unchecked global warming scenario.
In the current climate, the study found that a 5.9-meter (19-foot) storm surge is possible, in a strong Category 3 hurricane following a similar track to Tampa’s classic 1921 and 1848 storms.
Moreover, in a late 21st century climate with global warming run amok, the worst-case scenario generated by the model included a very different storm track, moving north along Florida’s Gulf Coast and then swerving inland at Tampa, that generated an 11.1-meter (nearly 37-foot) surge.
Granted, the study said that these two “gray swans” are exceedingly unlikely — less than 1 in 10,000 years for the 5.9-meter surge in the current climate.
But it also said that global warming shifts the odds toward the worse surges.
“The more publicity of the hurricane risk in Tampa, the better,” Emanuel said. 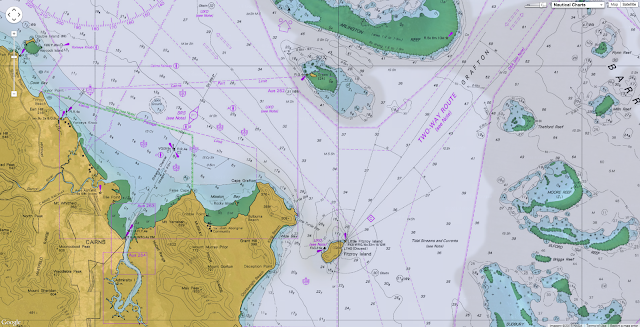 The study also shows that for Cairns, Australia, a 5.7-meter (18-foot) storm surge is possible in the current climate, but that would happen less than once in 10,000 years. 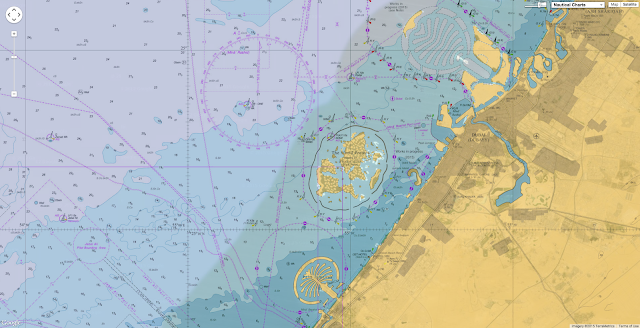 And perhaps most strikingly, it also suggests that an extremely powerful hurricane is theoretically possible where we’ve never yet seen them occur — the Persian Gulf.
The waters in the Persian Gulf are very hot and so contain considerable potential hurricane energy, but the atmosphere is normally too dry for hurricanes, Emanuel explained.
Nonetheless, “physics says that you can have one,” he said.
“‘It’s not likely, but it’s not impossible.”
Indeed, there have been several hurricanes or tropical storms that have entered the Arabian Sea, though none have made it into the Persian Gulf.
But the study showed that in extraordinarily rare circumstances, it’s also possible for a hurricane to be generated there.
Indeed, it found that with 3,100 simulated events in today’s climate, it is theoretically possible to get a hurricane with winds of over 250 miles per hour — stronger than anything we’ve seen on Earth — and a storm surge of 7.4 meters (24 feet) affecting Dubai.
Granted, it is hard to emphasize enough that this is a rare phenomenon — storms like this have “return periods of the order of 30,000–200,000 years,” the study said.

So, is all of this just a mathematical exercise — or something more?
In the end, it’s kind of in the eye of the beholder, as it’s up to us to decide how much to worry, if at all, about an extraordinarily rare event.
But you could make the case that a study like this helps us think a lot better about what risk is all about.
“You go out on the tail, the risk gets tinier and tinier and tinier, but the consequences of that event get exponentially larger,” Emanuel said.