Monterey Canyon is one of the deepest submarine canyons on the west coast of the United States.
The canyon head lies just offshore of Moss Landing on the Central California coast.
From there, the main channel meanders over 400 kilometers seaward to a depth of more than 4,000 meters on the abyssal plain.
Repeated mapping in certain areas of the canyon have shown that the terrain changes substantially every few months due to large sediment-transport events involving both debris flows and turbidity currents.
If the water drained from Monterey Bay, the newly revealed terrain would be stunning, with cliffs, gorges, valleys, and spires matching the scenery found in some of our most beautiful national parks. 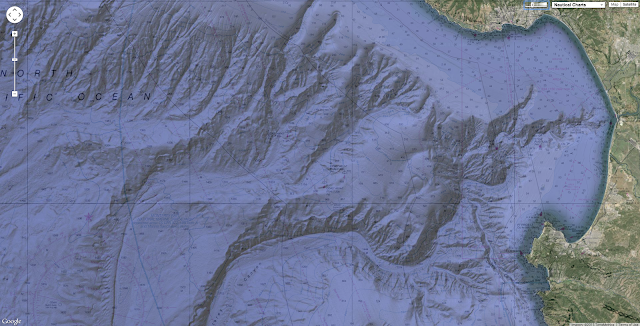 Monterrey Canyon with the GeoGarage platform


How these maps were created

Sonar has long been used to map the seafloor, usually with equipment mounted on a ship's hull.
The ship travels back and forth, sending sound waves toward the ocean floor.
When the sound waves hit the bottom, they bounce back to the surface, where the sonar receivers use the returned signals to indicate the depths of the seafloor.
Modern multibeam sonars use numerous narrow beams covering wide swaths of the seafloor to create maps like the bathymetric map shown here.
The more detailed maps overlaid on the base map were created with the Monterey Bay Aquarium Research Institute's mapping autonomous underwater vehicle (AUV).
Although the AUV uses the same technology, it flies closer to the bottom, allowing higher resolution maps to be made.
The AUV bathymetric maps show details as small as one meter (three feet) across, and are among the most detailed maps ever made of the deep seafloor.
Researchers use the detailed maps to understand seafloor morphology and the movement of sediment within submarine canyons.

Cross-sections of the Monterey Canyon (left) and Grand Canyon (right) shown at the same scale demonstrate that these features are similar in size and shape.
Both canyons are conduits through which massive volumes of sediment move.
While water flowing in the Colorado River carved the Grand Canyon, a directly analogous process is not known to have occurred within Monterey Canyon.

Monterey Canyon and the waters above it provide a wide array of habitats, from rocky outcrops and the soft seafloor to the dark midwater, where there is little or no sign of light from above nor of the seafloor below.
MBARI researchers often encounter rarely seen biological communities, observe novel behaviors of deep-sea organisms, and discover new species in the deep sea.