How sticks and shell charts became a sophisticated system for navigation

The stick chart shows several of the Marshall Islands in the South Pacific Ocean.
The long curving pieces indicate the dominant direction of swells (waves that have traveled over very long distances).
Skilled navigators could use a chart like this to recognize wave patterns and find their way.

From SmithsonianMag by Cari Romm


Sailors navigating with sextant, compass and maps found in the Marshall Islands that curved sticks and cowry shells were far more sophisticated

In 1899, Charles Townsend and H.F. Moore—both scientists with the U.S. Fish Commission—set out on the steamer Albatross, the first ship of its size dedicated entirely to scientific research, for an expedition to the islands of the South Pacific.
The sailors aboard the Albatross navigated their way across the globe as U.S. sailors did at the time: with a compass and a sextant—a tool that used the angles of the sun and the horizon to calculate latitude—and, of course, maps.
At the end of the ship’s journey, though, were sailors of a very different kind—sailors whose knowledge of the ocean was based on cultural knowledge passed down through generations.
The stick charts of the Marshall Islands were first described for a Western audience in an 1862 edition of Nautical magazine by missionary L.H. Gulick.
“[The Marshallese] construct rude maps by which they retain and impart knowledge regarding the direction and distance of the various groups” of islands, he wrote.
“These maps consist of small sticks tied together in straight or curved lines, intended to represent the currents or waves to be met, while the islands are to be found at certain points where these lines meet.”

The chart is less a literal representation of the sea,
but more an abstract illustration of the ways that ocean swells interact with land.
(National Museum of Natural History)


Using funds that the Smithsonian had given them to collect objects along their voyage, Townsend and Moore purchased one such chart, which they gave to the National Museum of Natural History in 1900.
But Gulick’s description of these “maps” wasn’t quite accurate: The chart is less a literal representation of the sea, says museum curator and anthropologist Adrienne Kaeppler, and more an abstract illustration of the ways that ocean swells interact with land.
Curved sticks, she explains, show where swells are deflected by an island; short, straight strips often indicate currents near islands; longer strips “may indicate the direction in which certain islands are to be found;” and small cowry shells represent the islands themselves. 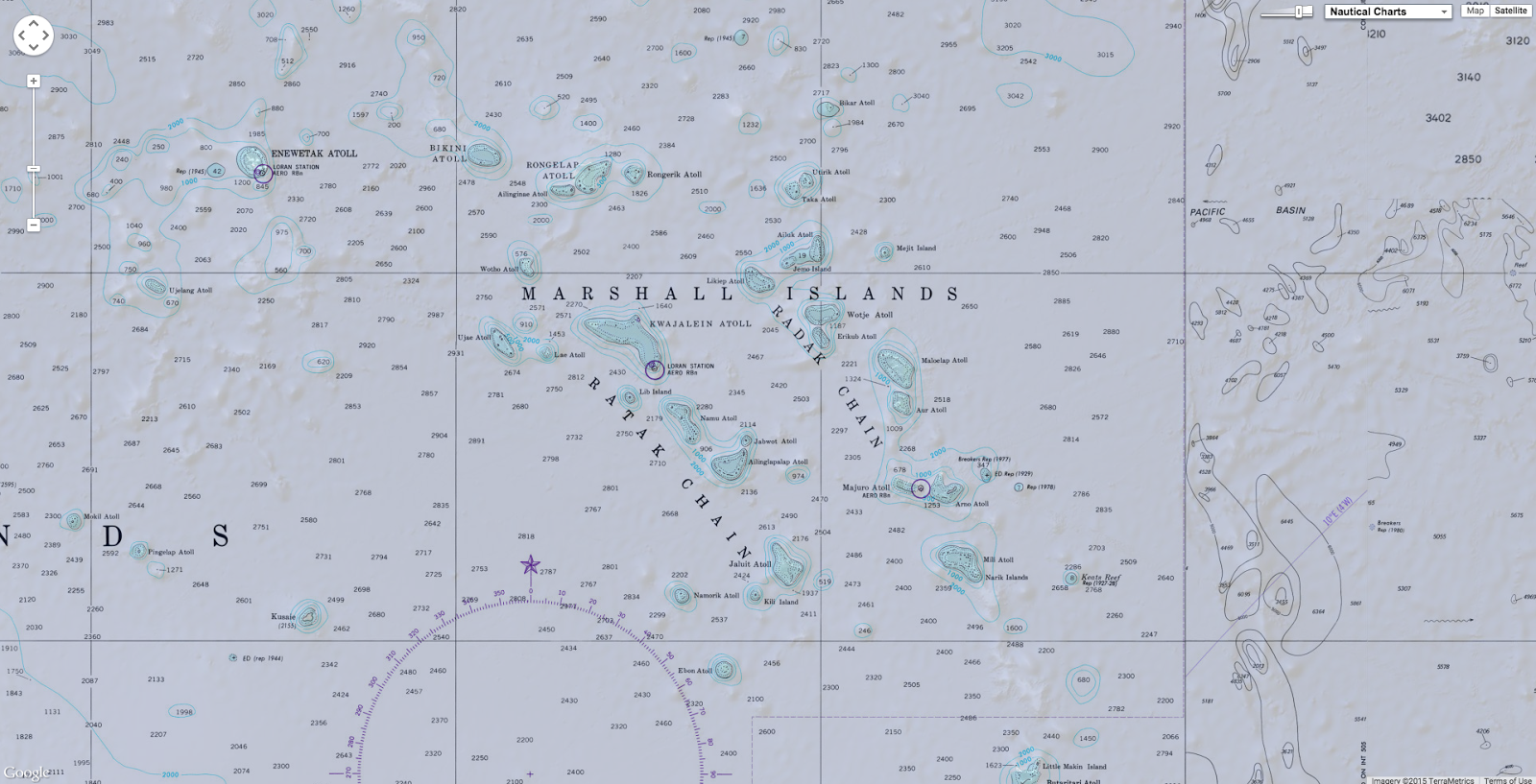 Marshall islands with the Marine GeoGarage

In places like the Marshall Islands—a tiny nation of roughly 112 square miles, spread across 29 atolls and five islands—“Survival depends on knowledge of and rapport with the sea,” Kaeppler says.
“This requires knowledge of how to get across the sea, how to exploit it for food, and what to do when devastated by it—[by] hurricanes, tidal waves, or storms.”
The Marshallese built this essential knowledge by studying the charts on land; by the time a sailor took to the ocean, he would have fully absorbed the lessons contained within the patterns of the sticks.
The stick chart is an instructional tool, one meant for use before a voyage, rather than something to be used for real-time navigation.

In places like the Marshall Islands, survival depends on a knowledge and rapport with the sea.
(© W. Robert Moore/National Geographic Society/Corbis)


“They seem to have focused on one particular environmental phenomenon, which is the waves and the currents, and then developed that into a more elaborate system,” explains Joseph Genz, a professor of anthropology at the University of Hawaii who wrote his dissertation on the subject. “They’re picking out repeating patterns in the waves, and for them, those give reliable signals as to where land is.”
As a graduate student in 2005, Genz traveled to the Marshall Islands with a team of anthropologists and oceanographers for what he calls a “revival project.”
Traditional navigational knowledge, he says, was dying out with the islands’ oldest generation, and the team from the University of Hawaii agreed to help the elders document and resurrect the Marshallese understanding of the seas.

Using a combination of satellite imagery, computer modelling and a buoy to measure wave frequency, size and direction, they were able to “validate and confirm some of the local explanations with the scientific explanations,” Genz says—but out on the water, away from their equipment, the researchers still found themselves at a loss to explain some of the things the Marshallese seemed to know instinctively.
“A lot of times the navigator would say, ‘There’s the wave, can you feel it?’ and I’d say, ‘No, I can’t,’” he recalls.
“Part of it was trying to feel what he was feeling, but not being able to see it.”


Hundreds of years ago, Pacific Islanders used voyaging canoes to travel.
They developed navigation techniques to steer across the ocean without instruments or charts.
The Marshall Islands is a nation in the western Pacific.
The land is formed from low-lying coral atolls and islands.

Many of the lessons contained within the stick charts, in other words, have yet to be fully understood. “It’s quite possible that the traditional knowledge of the ocean in the Marshalls could somehow provide insight into science itself,” he says.
“So often, we think about science as trying to make sense of everything else in the world, but it could also be the other way around. This local oceanographic knowledge might influence our scientific understanding as well.”