The $1 billion superyacht: Bigger, longer, but is it better?

4Yacht, Inc. presents yacht project "Triple Deuce", a whopping 222 meters (728.4’) long, and the most expensive, at a cost of over one billion dollars...
4Yacht is not able to provide more details, such as the designer, or the volume.
They did release information about the engines; triple gas turbine engines producing over 100,000 horsepower, powering electric podded propulsion units.
Adding such features will almost certainly add more time to the total construction time, putting more pressure on the 2018 delivery date.
Time will tell if construction of this project will eventually commence.

From CNN by Sheena McKenzie

There's big. And then there's bigger.

Introducing "Triple Deuce," set to be the world's biggest superyacht at a whopping 222 meters long.

At $1 billion, it will also be the most expensive private yacht ever built, costing more than the annual GDP of Western Sahara, the British Virgin Islands, and Micronesia.
The identity of "Triple Deuce's" owner remains secret.
Nonetheless, building a yacht of this size is all about "boasting rights," said Craig Timm of 4Yacht, broker of the record-breaking project.
"It's just like the competition to build the world's tallest building," he said of the commission, due to be completed in spring 2018.
"Project Deuce will cost $1.1 billion to $1.2 billion," added Timm.
"And don't forget to add in annual operating costs -- on a yacht of this size, it will run the owner up an additional $20 to $30 million per year."

The boat will be over 40 meters longer than the world's current biggest superyacht, "Azzam," believed to be owned by the President of the United Arab Emirates, Sheikh Khalifa bin Zayed Al Nahyan.
It will also trump Russian businessman Roman Abramovich's "Eclipse" by 58.5 meters. 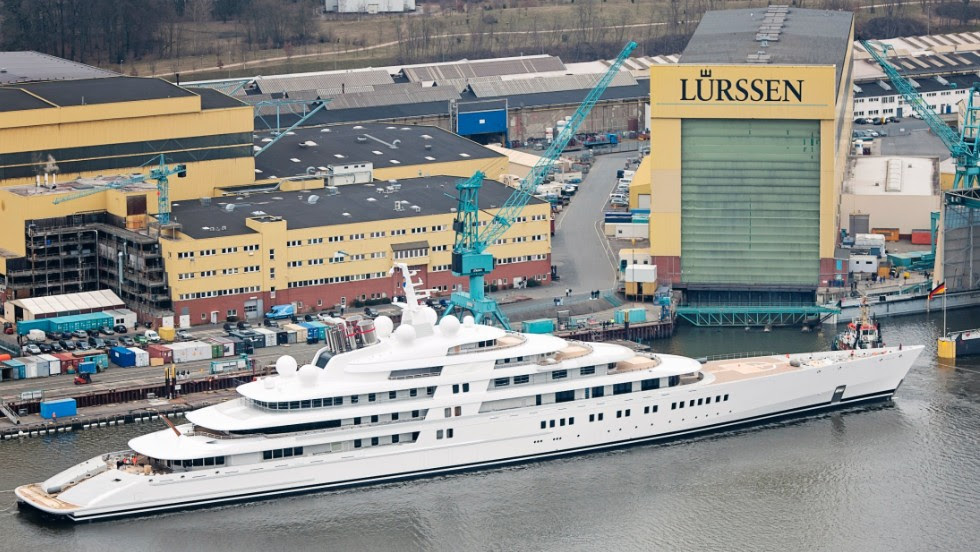 At 180 meters long, "Azzam" is currently the biggest superyacht in the world... but for how long?

"Our client was concerned that if we built the yacht to 200 meters, then someone would come along like Roman Abramovich when he built "Eclipse" at 163.5 meters, and outdid Sheikh Maktoum's yacht, the 162 meter "Dubai," by only 1.5 meters," explained Timm.
"By building the yacht to 222 meters, the owner wants to make it difficult, if not impossible, to be 'eclipsed' himself."

As the race to build the world's biggest superyacht steps up a notch, is there a point when these floating palaces simply become "too big?"
"You can't really be 'too big' for the high seas. But these superyachts are now at such a size that many of them can't get into harbors," said John Kampfner, author of "The Rich: From slaves to superyachts, a 2,000 year history."
"So what they do is moor out at sea, and a small boat -- which is still enormous by the standards of ordinary mortals -- will take them to shore. Or they could always jump on their helicopter, because no self-respecting superyacht comes without a helipad these days."

In the past two decades average superyacht sizes have more than doubled, according to Gaelle Tallarida, managing director of the Monaco Yacht Show.
"Fifteen years ago a large yacht was 45 meters," she said.
"Whereas now it's 100 meters long, maybe even a little more," she said.
"And I think we have still not achieved the limit."
"Triple Deuce's" master suite alone encompasses two stories and stretches across 275 square meters -- including a private gym. The seven-deck superyacht also comes with two pools, numerous jacuzzi, and a hair stylist and barber.

Yet in a global climate of "haves and have-nots," is it morally justifiable to spend $1 billion on a private yacht catering for 36 guests?
"To be honest, what ordinary mortals think is 'moral,' is not actually relevant to these people," said Kampfner.
"You have to understand that we're not talking about the top 1% -- in this instance we're talking about the 0.01%. This is a tiny group who live in their own bubble, they mix only among themselves."

Timm sees things differently, pointing to the employment opportunities created during the building and running of the superyacht.
"The boat will take approximately two to three million human hours to build -- not counting all the worldwide subcontractor hours, or the ready-made items already available on the market ready to be installed on the yacht," he said.
"Building the yacht at the shipyard will directly employ, at the minimum, 500 people for a period of three years. These people, who have families to support and feed, will be gainfully employed.
"And this does not include the 50 to 70 people who will work on the yacht and will be employed full time by the yacht owner, as well as others who supply the yacht."

He extends this reasoning to the media -- "You, the journalist, benefits from this build indirectly by being gainfully employed by CNN for writing this story."

And you, the person reading this story?
Kampfer sees the public's interest in the lifestyles of the super rich as a type of luxury porn.
"There is an enormous sense of injustice which is shared not just by the poor, but also by the middle class, towards the global super rich," he said.
"But together with that however, is a sense of envy and ogling. So whether you call it confusion, or double standards, or hypocrisy, or whatever it might be -- we both abhor the lifestyles of the super rich and at the same time we are endlessly fascinated by them."
Posted by geogarage at 1:57 AM