Navy develops ‘GhostSwimmer’ drone that looks like a shark

The US Navy is testing a fish like robot designed to carry out stealthy, silent and secure underwater surveillance missions - from intelligence gathering to hull inspections, where its silent operation and mission endurance would provide great advantages to sailors and marines.
(other video)

From Wired by Jordan Golson

The American military does a lot of work in the field of biomimicry, stealing designs from nature for use in new technology.
After all, if you’re going to design a robot, where better to draw inspiration than from billions of years of evolution?
The latest result of these efforts is the GhostSwimmer: The Navy’s underwater drone designed to look and swim like a real fish, and a liability to spook the bejeezus out of any beach goer who’s familiar with Jaws. 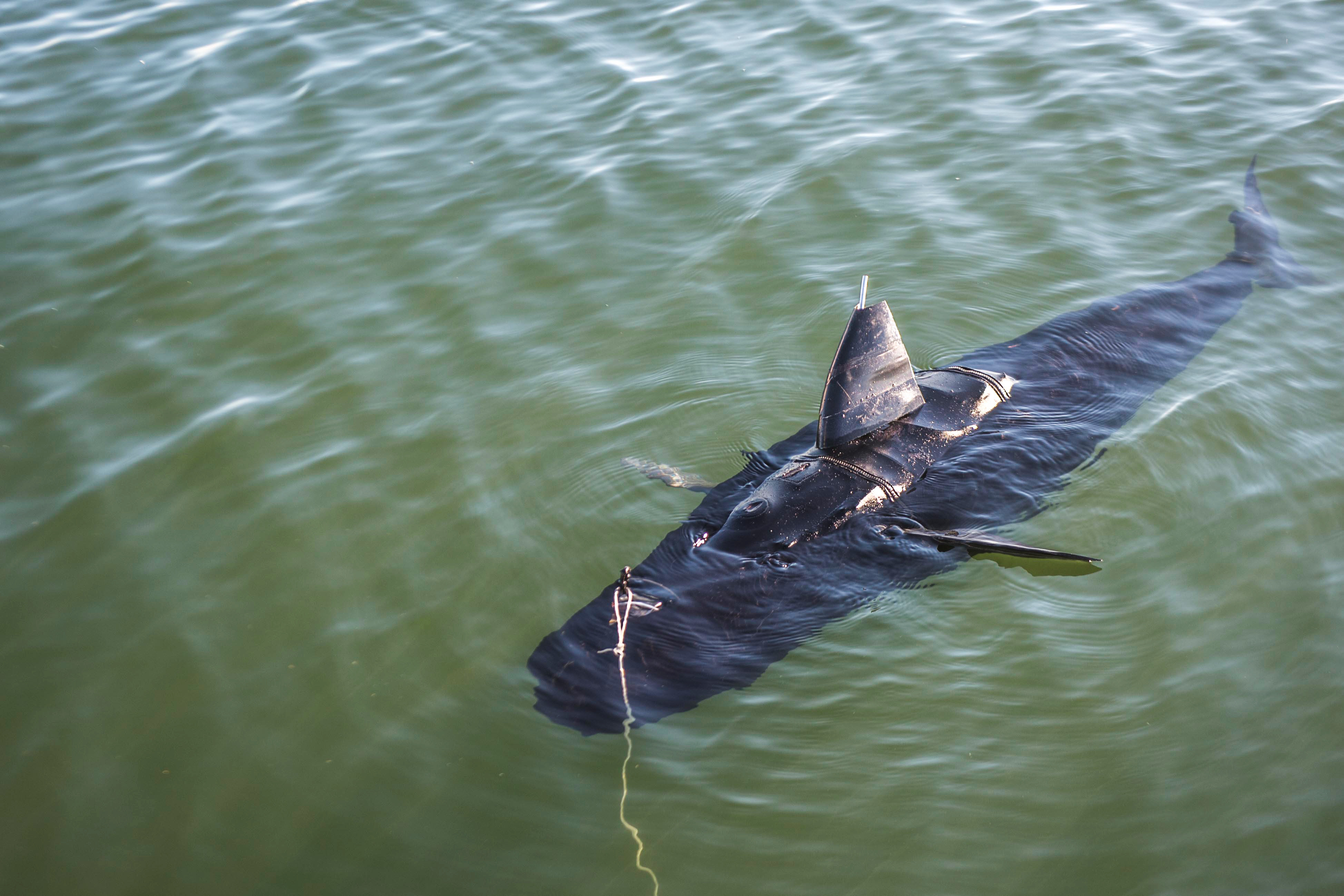 The functions of the Ghost Swimmer, a biomimetic device modeled after the bluefin tuna, is demonstrated at the Joint Expeditionary Base Little Creek
(Edwar Guttierrez/US Navy)

The new gizmo, at five feet long and nearly 100 pounds, is about the size of an albacore tuna but looks more like a shark, at least from a distance.
It’s part of an experiment to explore the possibilities of using biomimetic, unmanned, underwater vehicles, and the Navy announced it wrapped up testing of the design last week.

The robot uses its tail for propulsion and control, like a real fish.
It can operate in water as shallow as 10 inches or dive down to 300 feet.
It can be controlled remotely via a 500-foot tether, or swim independently, periodically returning to the surface to communicate.
Complete with dorsal and pectoral fins, the robofish is stealthy too: It looks like a fish and moves like a fish, and, like other underwater vehicles, is difficult to spot even if you know to look for it.

Down the line, it could be used for intelligence, surveillance, and reconnaissance missions, when it’s not assigned to more mundane tasks like inspecting the hulls of friendly ships.
Animal lovers will be glad to hear that the GhostSwimmer could take the jobs of the bottlenose dolphins and California sea lions the Navy currently trains to spot underwater mines and recover equipment.

The GhostSwimmer joins the ranks of animal-based awesome/creepy robots like the “Cheetah” that can run at nearly 30 mph, the Stickybot that climbs like a gecko, and the cockroach-inspired iSprawl that can cover 7.5 feet per second.
And it may get a baby brother: The Department of Homeland Security has been funding development of a similar, smaller robot called the BIOSwimmer.


This robotic tuna is the final product of a team of students from the Olin College of Engineering.

True to military form, there’s a whole suite of acronyms to go along with the new toy: The UUV (unmanned underwater vehicle) has been in testing at the JEBLC-FS (Joint Expeditionary Base Little Creek-Fort Story), and was developed by the CRIC (Chief of Naval Operations Rapid Innovation Cell) project, called Silent NEMO (actually, this one doesn’t seem to stand for anything).
It was developed by the Advanced Systems Group at Boston Engineering, a Navy contractor that specializes in the development of robotics, unmanned systems and something called “special tactical equipment”.
The company and Navy haven’t said much about when GhostSwimmer might be deployed or how much it would cost, but next time you’re at the beach and see a fin sticking out of the water, it might be a killer shark—or it might just be a Navy robot.