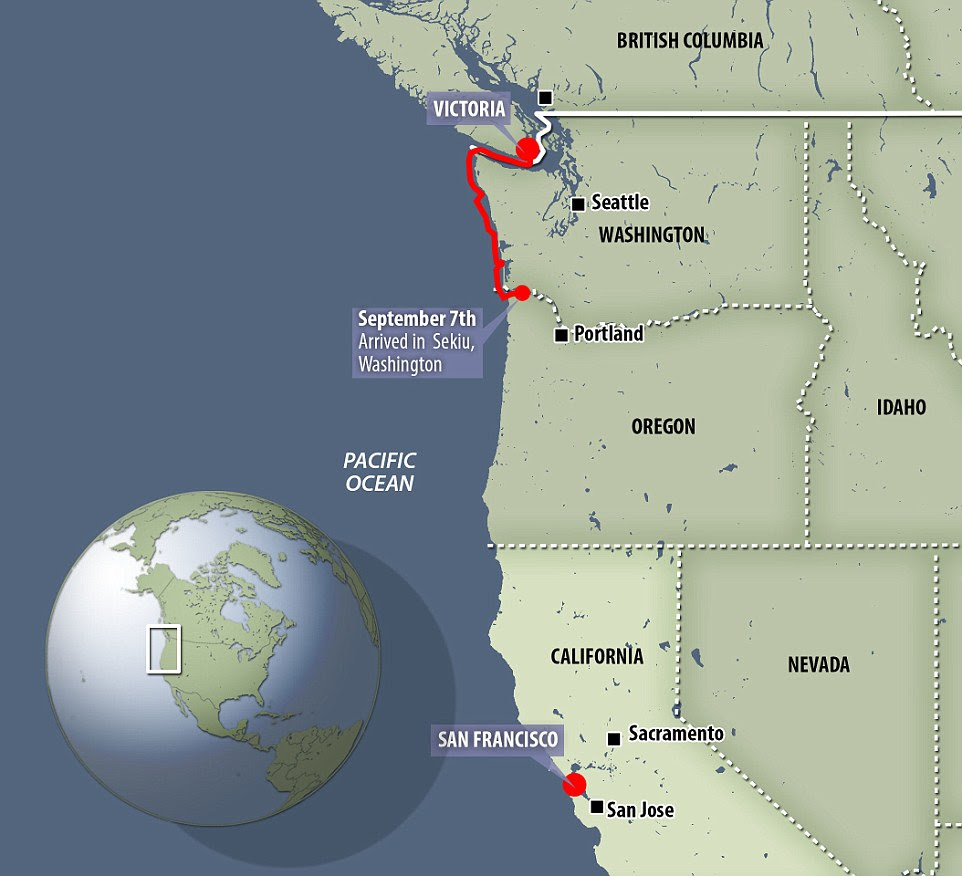 
From DailyMail by Jack Crone

These breathtaking photos were captured by adventurer Daniel Fox - who spent three months circling the remote and unspoiled islands of Alaska in just a kayak.
The explorer, 40, from San Francisco, took on the challenge to offer people a tantalising glimpse into the region's spectacular scenery and animals.
Mr Fox, also a wildlife photographer, first visited the north-western state in 2013 and fell in love with the abundance of sea otters, deer and eagles. 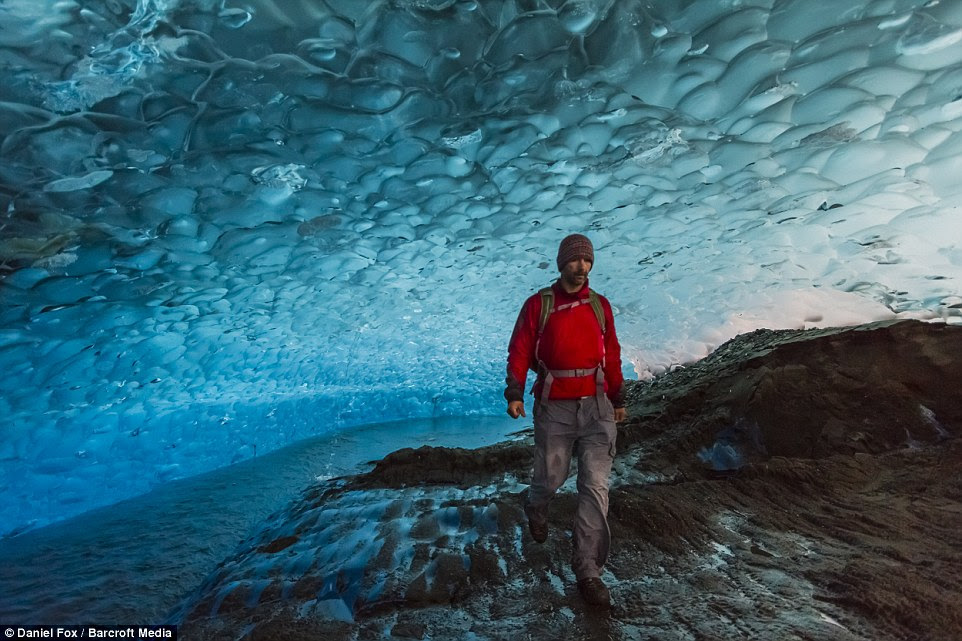 He decided to return this summer and spent three months travelling around the islands by kayak, meeting humpback whales and brown bears along the way.
Armed with just a few supplies he camped on the site where Russians established one of their first settlements in Alaska in the late 1700s.
He regularly awoke to bears and deer inspecting his tent - but the animals were merely curious about the lone human camping in the open air.
He said: 'I camped where the Russians established the location of their first Alaska settlement and first substantial European settlement on the Pacific Coast of North America, north of California.
'I dined watching humpbacks breaching and feeding, listening to their roaring splash echoing around, bouncing off the steep mountains. 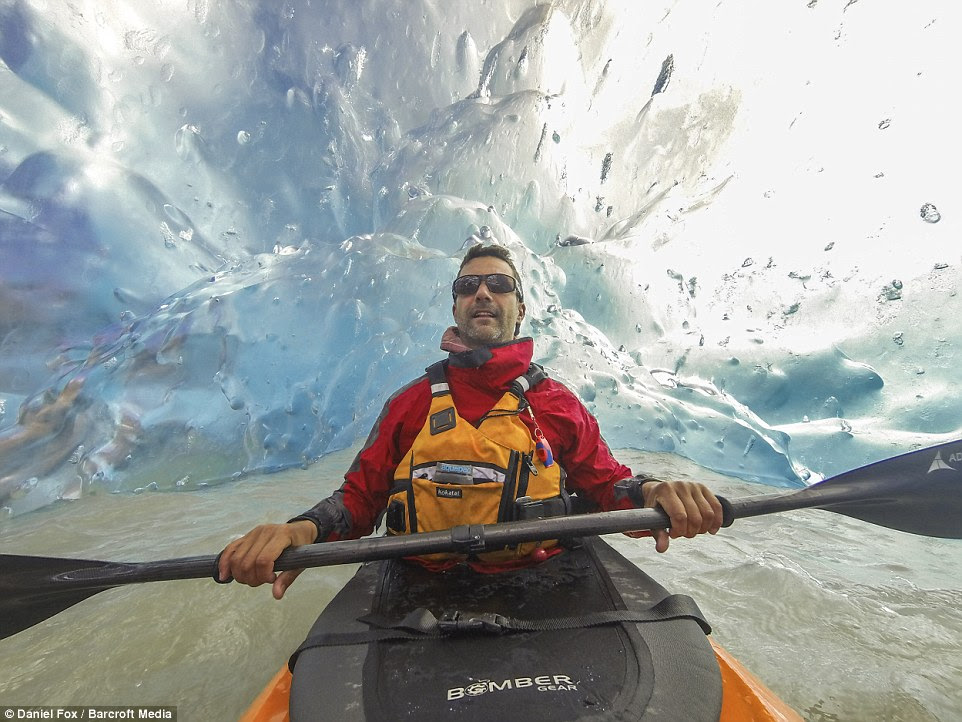 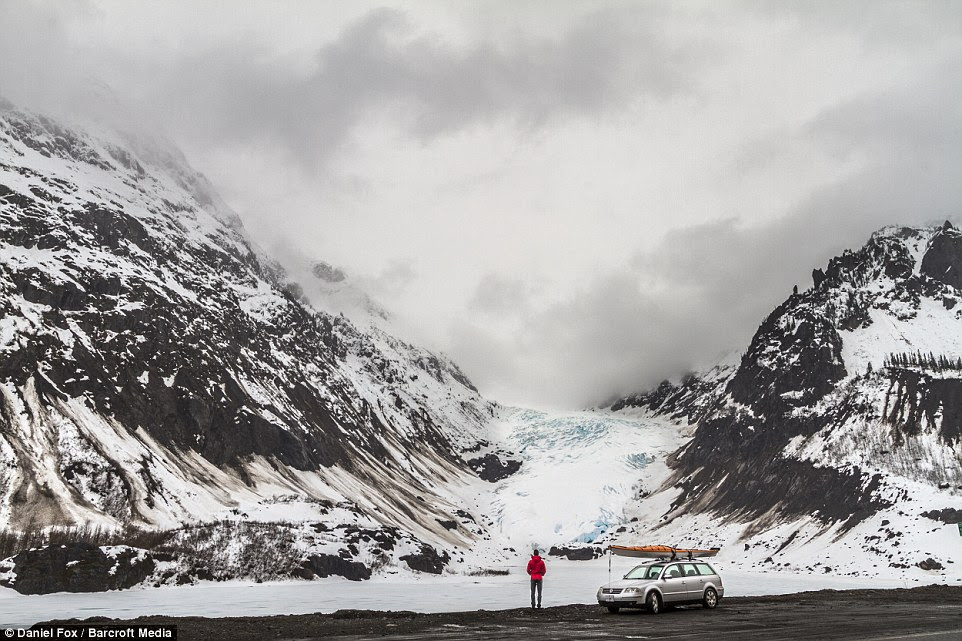 This beautiful photo was taken at the outset of the trip - he is pictured at Bear Glacier next to his kayak in April 2014 in British Columbia, Canada 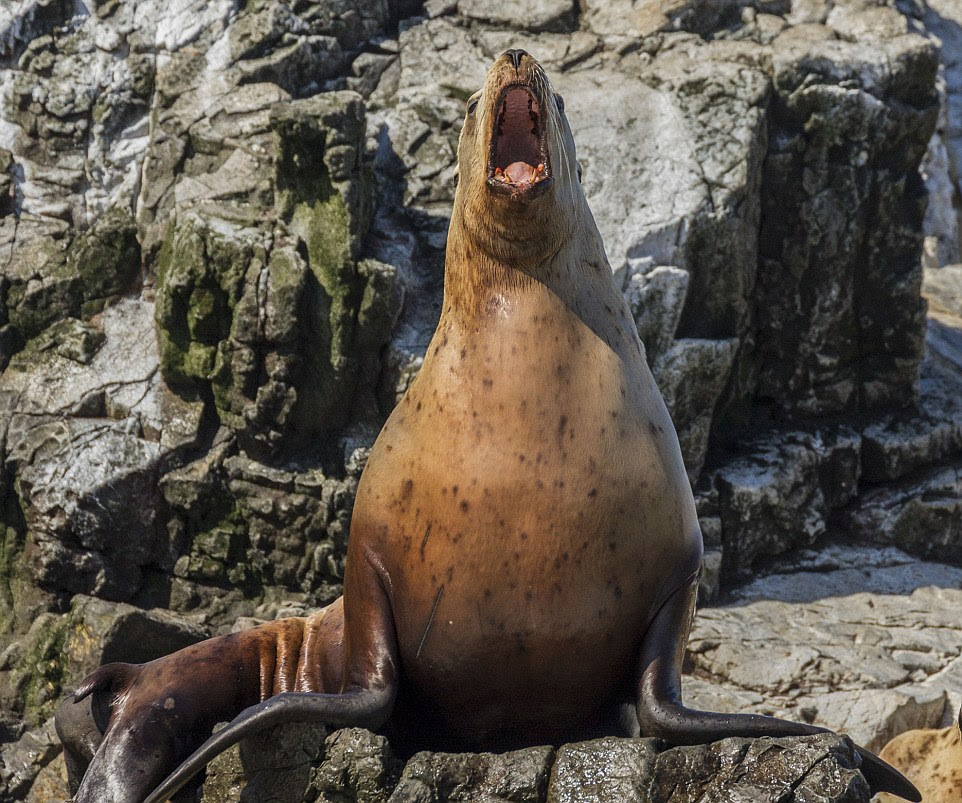 A sea lion yawns at Daniel Fox as it sits on rocks in Kodiak Island, Alaska - the explorer describes himself as an artist and a storyteller

'I went back to Mendenhall Glacier but this time paddling the lake and exploring the icebergs. It was during that outing that I found this amazing iceberg cave.
'Kayaking is a really intimate relationship with the water and the places you visit. You are sitting in this small cockpit, feeling every little ripple, wave, breeze, or current.'
Mr Fox, who counts Sir David Attenborough as one of his heroes, describes himself as a photographer, storyteller and artist and says his mission is to bridge the gap between nature and the public. 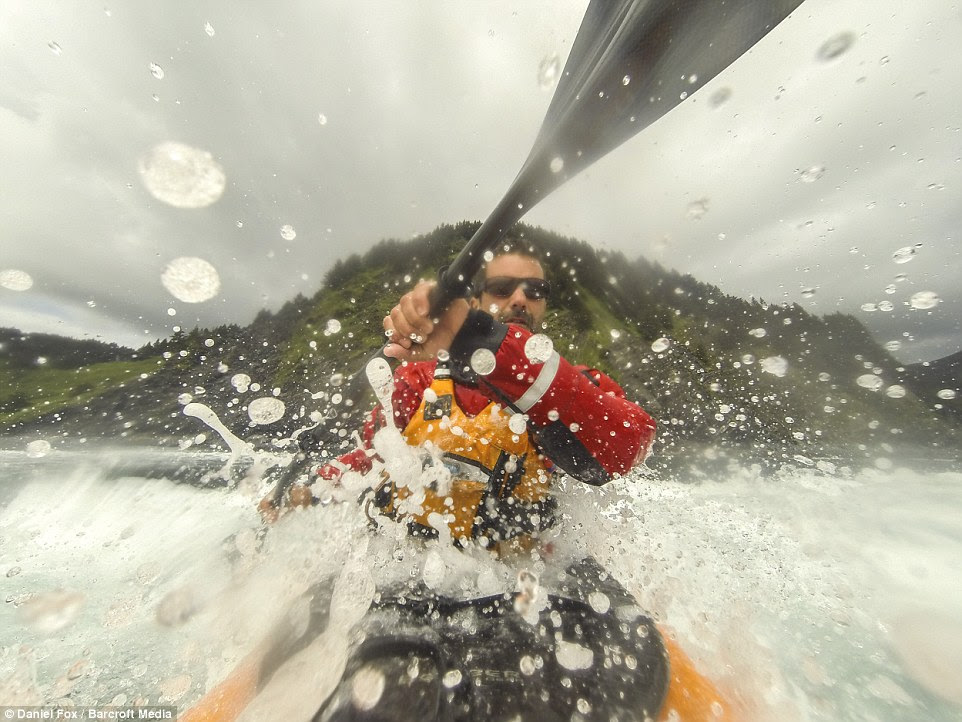 Daniel Fox splashes water into the camera as he kayaks around the stunning scenery in June this year in Afognak Island, Alaska

Not one to shy away from adventure, he is currently kayaking down the Pacific coast from Victoria, Canada, to San Francisco, California.
The astonishing 1,000 mile journey is in aid of Wilderness Immersion for Leadership and Discovery (W.I.L.D.), a foundation Mr Fox started to connect young people with wildlife.
The goal is to raise $14,500 in sponsorship so that two underprivileged teenagers can attend a 30-day sea kayaking camp in Alaska in 2015.
He is now three weeks into the journey, has kayaked more than 300 miles, bringing him to waters off the coast of north Oregon, and has raised just under $5,000.

"Really rarely do we have the capacity to just focus on one single thing.
The minute of nature is a daily exercice is like a meditation; to try to disconnect from all our distractions and just to basically stop :
Stop, breathe, relax, listen, enjoying the moment"
(see Paddling magazine)

The intrepid explorer is currently three weeks into a monstrous 1,000 mile Pacific kayak expedition from Victoria, Canada, to San Francisco, California
The explorer says 'nature is raw, rough, cruel, pretty, beautiful, inspiring, but above all, a humble experience' (pictured above is a red fox) 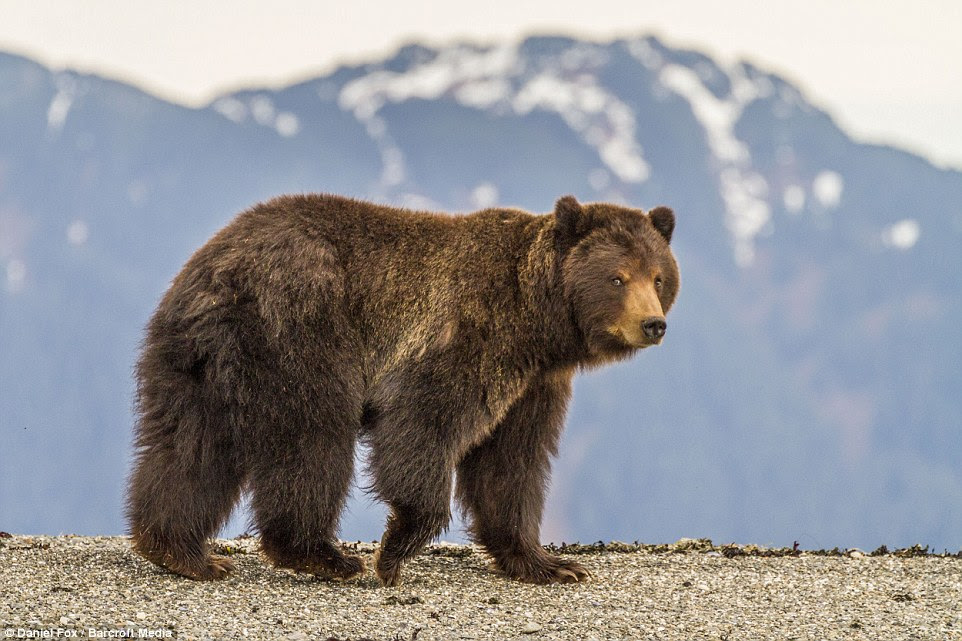 A lone brown bear looks straight into the camera as it  walks along the beach in this image taken in May 2014 on Admiralty Island, Alaska

On his foundation's website, Mr Fox says: 'Ever since I was a young boy, I found my inspiration and comfort in nature. It taught me about life, and death.
'Nature is raw, rough, cruel, pretty, beautiful, inspiring, but above all, a humble experience.'
Explaining his inspiration for starting the foundation he says: 'Unfortunately many of today's youth are immersed in a totally different reality.
'Living in front of the computer, the television omnipresent and socially connected via smartphones, they spend little time in nature and rarely disconnect from technology. 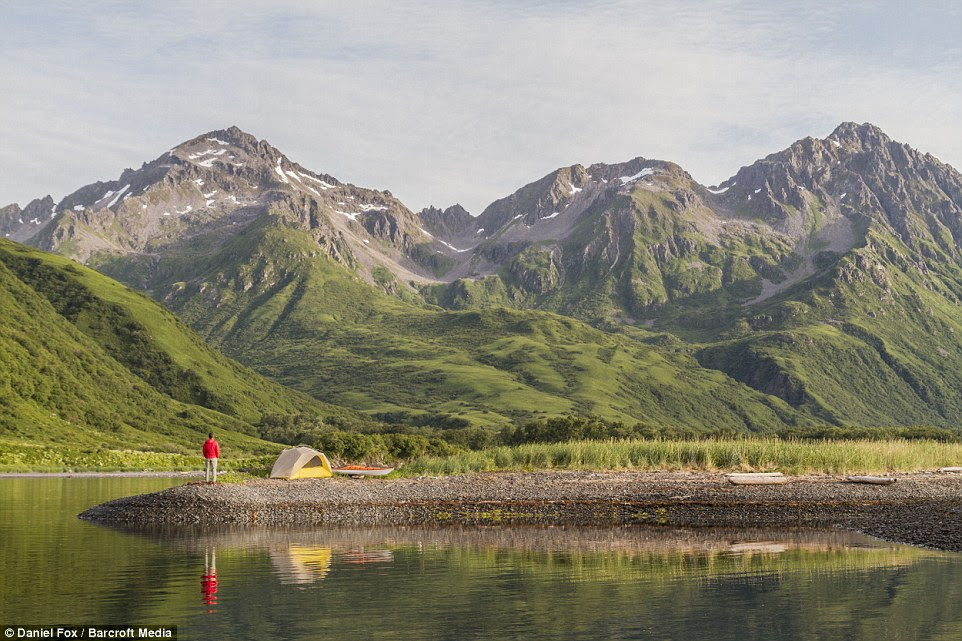 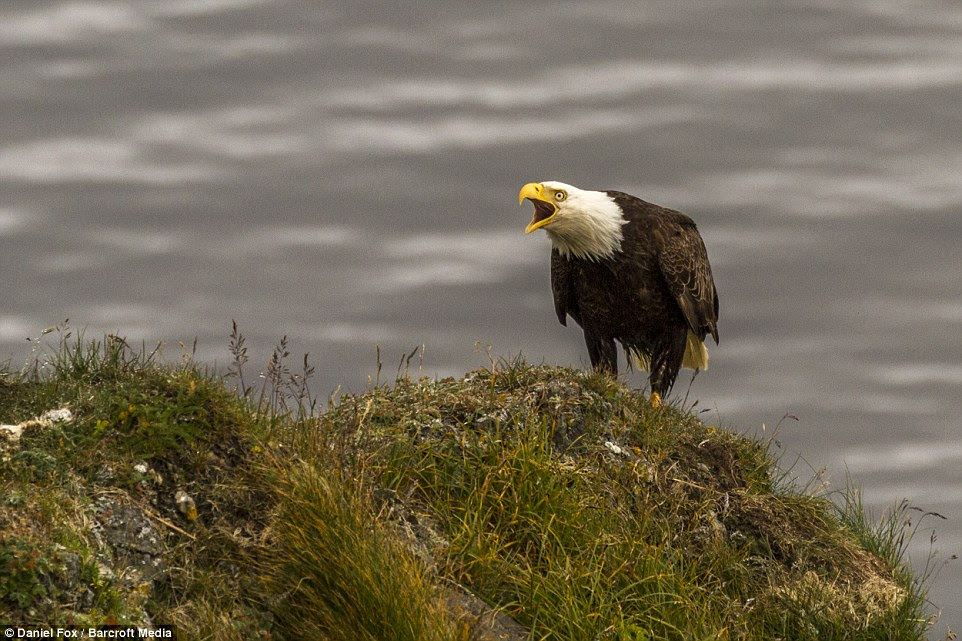 Mr Fox's goal is to raise $14,500 on his current expedition so that two underprivileged teenagers can attend sea kayaking camp in Alaska in 2015 (a bald eagle above)
'If their lives exist on the screen now, it’s unrealistic to think they will have the desire to connect with the natural world as they mature.
'Yet, humans have always been connected with nature - 99.9% of our evolution comes from living in natural environments and our psychological underpinning is still entrenched in many ways with nature.'
To track his progress on his 1,000 mile challenge, you can visit his W.I.L.D. website. 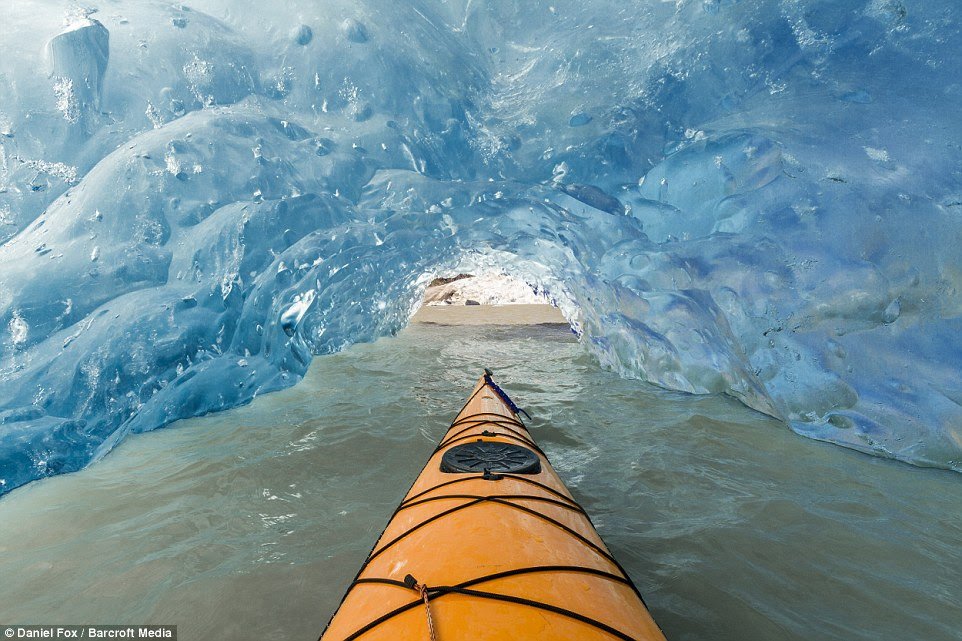 Explaining his inspiration for starting the foundation he says: 'Unfortunately many of today's youth are immersed in a totally different reality' 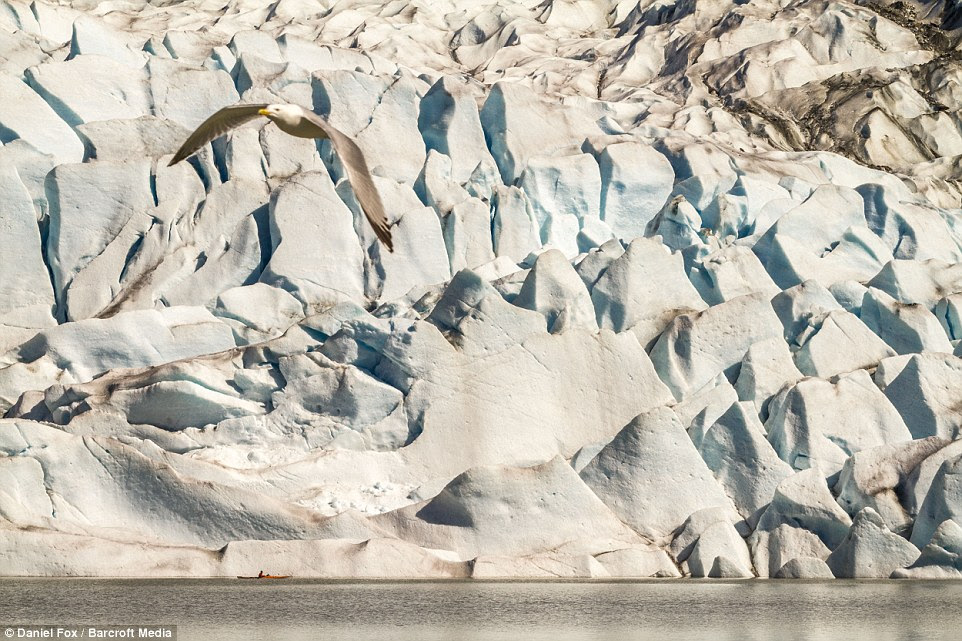 Mr Fox first visited the north-western state in 2013 and fell in love with the abundance of sea otters, deer and eagles (above a bird flies near Afognak Island, Alaska) 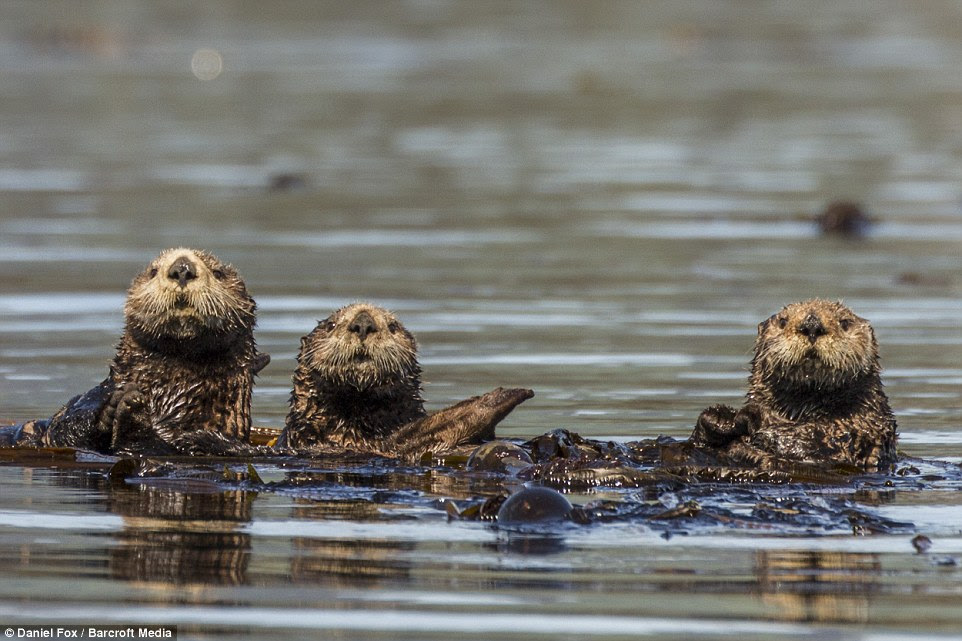 Daniel Fox photographed three otters playing in the water on Kodiak Island, Alaska, this summer during a three month kayaking trip around the state's islands