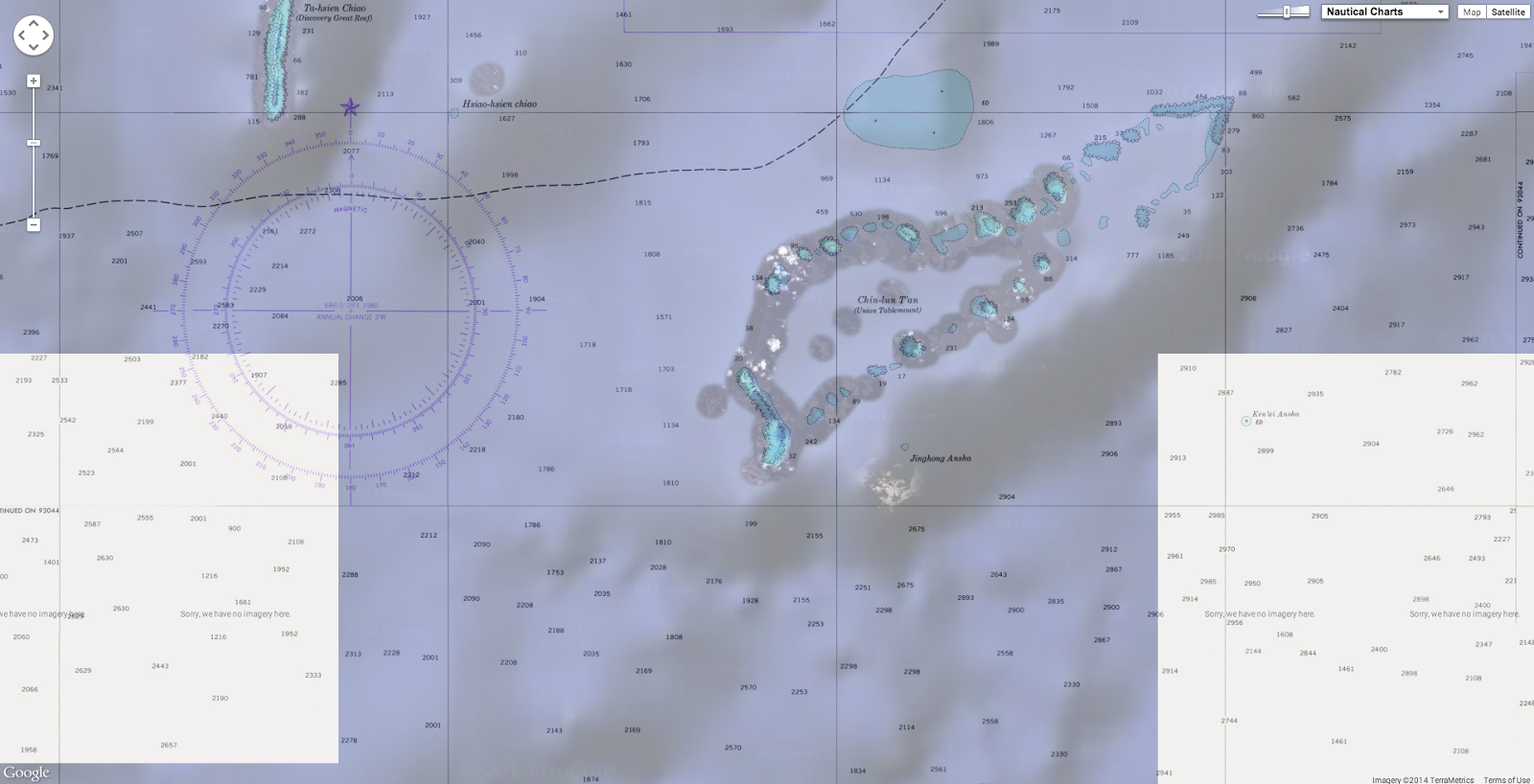 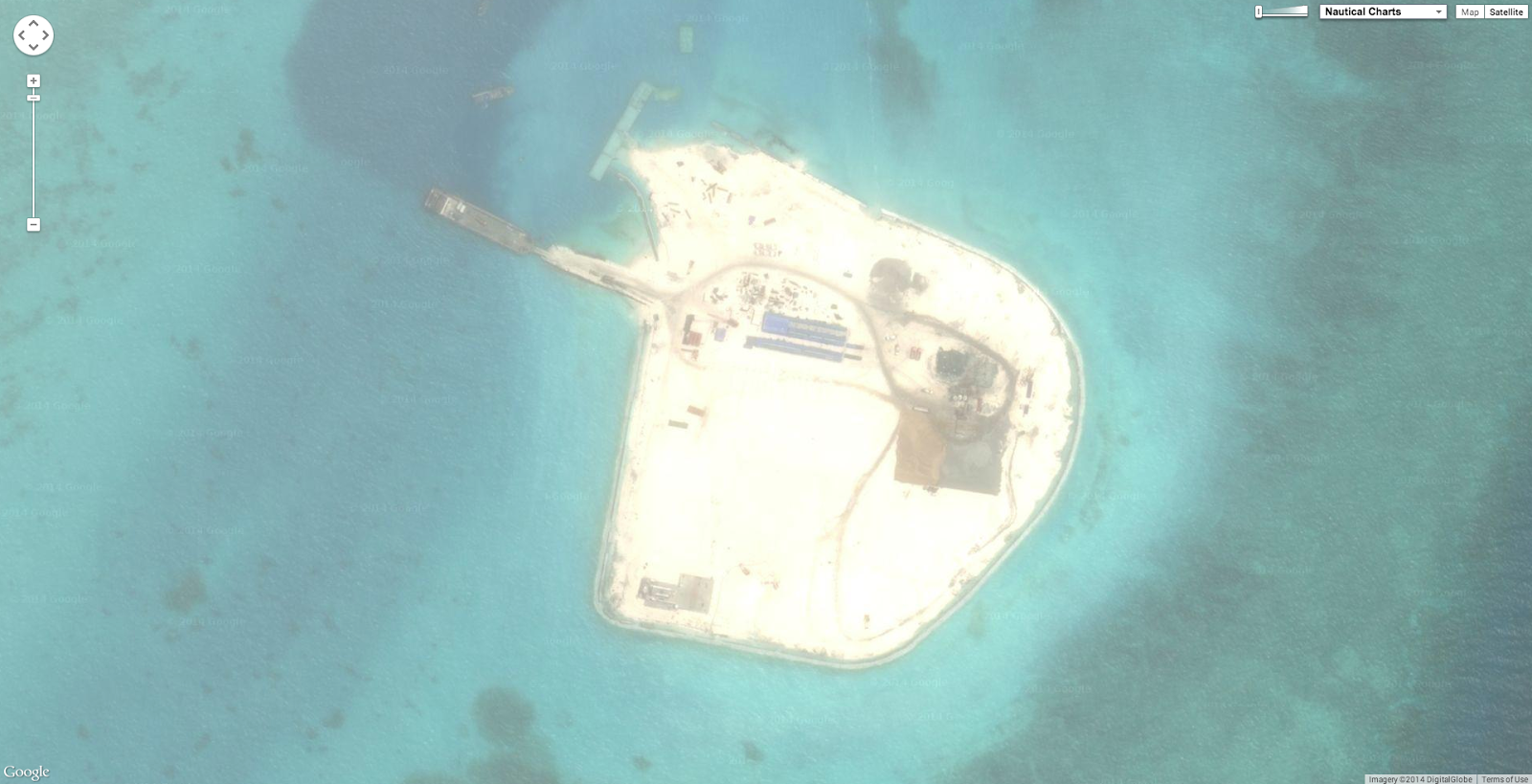 From SMH by Lindsay Murdoch

For centuries they were dots in turquoise waters, home only to sea birds.
But the latest images show that land reclamation and construction is underway on Kennan and Burgos islands in the heart of the Spratly Islands and on its eastern and western extremes, as China aggressively presses territorial claims in the resource-rich waters. 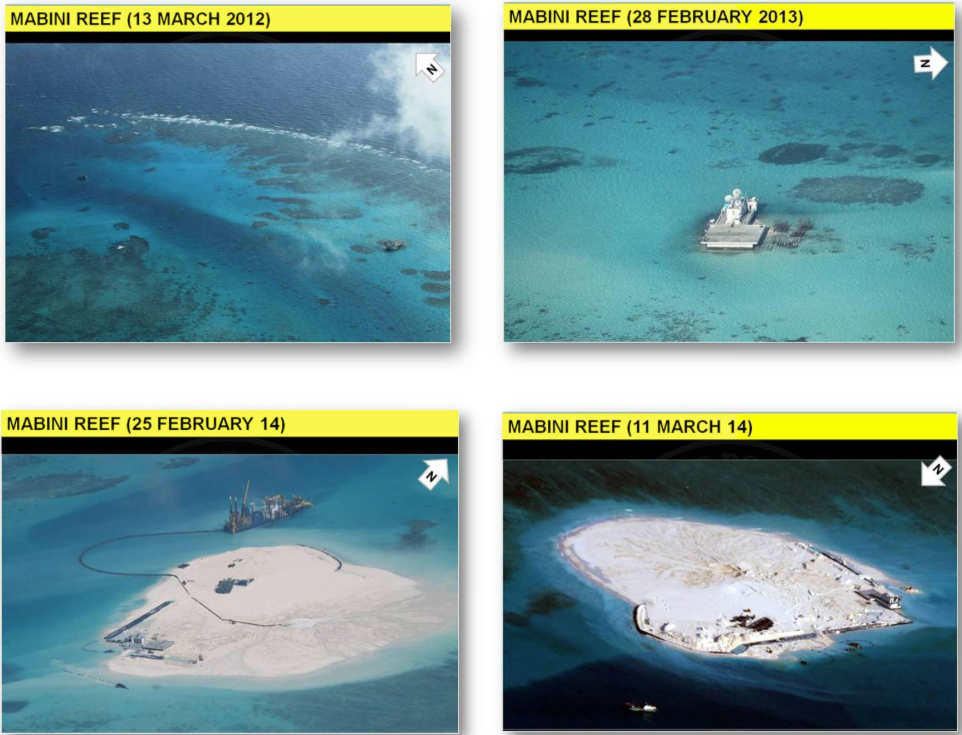 The United States warned last week that China's accelerated land reclamation work had proved "intimidating and worrisome" for other regional countries, including the Philippines and Vietnam.

US Assistant Secretary of State Daniel Russel, the senior US diplomat for East Asia, said that while Beijing rightly points out it is not the only claimant country to have carried out such work "the pace of China's reclamation in the sensitive disputed waters of the South China Sea vastly outstrips what other claimants have done in the past by many orders of magnitude."
"What I think the effect of what they are doing is to destabilise the situation and make it harder, not easier, for the claimants to resolve their claims peacefully," he said.
The US has stepped up surveillance flights over the region, despite Chinese protests, including reportedly from bases in east Malaysia.

Burgos Reef, July 29, 2014.
The reclaimed portion appears with an altered shoreline that has been reinforced by breakers.

Carl Thayer, an expert on the South China Sea from the University of New South Wales, said that while the photographs do not support speculation China is building military bases or airports on the islands they support the "official Chinese position that land reclamation and other construction activities will improve the quality of life for Chinese living on these artificial islands."
"This basic infrastructure could support economic activities, including rudimentary medical facilities and, if the Chinese were so inclined, serve as lilypads to small search and rescue aircraft," Professor Thayer said.
"These photographs alert analysts to keep a close watching brief on Chinese activities and to adjust assessments of their military utility as construction continues."

Kennan Reef, April 2014.
Waterways are dredged while excavated residue is used to reinforce the land.

Defence analysts in the US and Asia have been tracking the movements of a 127-metre Chinese dredging ship, the Tian Jing Hao, that is believed to have transformed at least six reefs into artificial islands this year, sucking up the seabed and disgorging it on reefs at the rate of 4,500 cubic metres per hour.
Tensions were heightened in the region in May when China moved an oil drilling platform into an area of the sea disputed with Vietnam which prompted an eruption of anti-Chinese rioting in Vietnam.
The Philippines has attempted to shore up its claims in the sea, releasing dozens of ancient map which officials said show that China's historical southernmost territory was always Hainan island, just off the Chinese coast.

Kennan Reef, July 29, 2014.
An increased number of construction equipment, materials and container vans
used as shelter for the workers appear.

Philippine officials said the maps dating from the Song Dynasty in the year 960 do not include Scarborough Shoal as Chinese territory, an area where China has been engaged in a acrimonious stand-off with the Philippines.
The Philippines, a close US ally, has brought a case to a United Nations court in The Hague challenging China's sovereignty claims.
China claims the near entirety of the South China Sea, a major maritime thoroughfare that is also claimed by Malaysia, the Philippines, Taiwan and Brunei.