Seeing equinoxes and solstices from space

The four changes of the seasons, related to the position of sunlight on the planet, are captured in this view from Earth orbit.

One of the most frequently misunderstood concepts in science is the reason for Earth’s seasons.
As we experience the September equinox today—anyone try to balance an egg yet?—we thought we’d offer a space-based view of what’s going on.
Around 6 a.m. local time each day, the Sun, Earth, and any geosynchronous satellite form a right angle, affording a nadir (straight down) view of the terminator, the edge between the shadows of nightfall and the sunlight of dusk and dawn.
The shape of this line between night and day varies with the seasons, which means different lengths of days and differing amounts of warming sunshine.
(The line is actually a curve because the Earth is round, but satellite images only show it in two-dimensions.)
The Spinning Enhanced Visible and Infrared Imager (SEVIRI) on EUMETSAT's Meteosat-9 captured these four views of Earth from geosynchronous orbit. 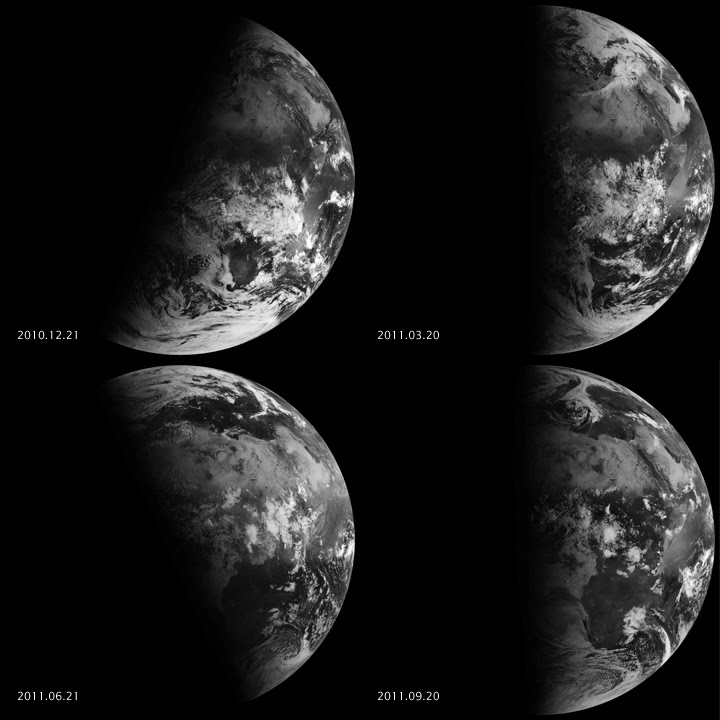 The images show how sunlight fell on the Earth on December 21, 2010 (upper left), and March 20 (upper right), June 21 (lower left), and September 20, 2011 (lower right).
Each image was taken at 6:12 a.m. local time.
On March 20 and September 20, the terminator is a straight north-south line, and the Sun is said to sit directly above the equator.
On December 21, the Sun resides directly over the Tropic of Capricorn when viewed from the ground, and sunlight spreads over more of the Southern Hemisphere.
On June 21, the Sun sits above the Tropic of Cancer, spreading more sunlight in the north and turning the tables on the south.

The bulge of our spherical Earth blocks sunlight from the far hemisphere at the solstices; that same curvature allows the Sun’s rays to spread over more area near the top and bottom of the globe.
Of course, it is not the Sun that is moving north or south through the seasons, but a change in the orientation and angles between the Earth and its nearest star.
The axis of the Earth is tilted 23.5 degrees relative to the Sun and the ecliptic plane.
The axis is tilted away from the Sun at the December solstice and toward the Sun at the June solstice, spreading more and less light on each hemisphere.
At the equinoxes, the tilt is at a right angle to the Sun and the light is spread evenly.
The equinox and changing of the seasons occurs on September 23, 2011 at 9:05 a.m. Universal Time. (Our September image above is a few days early.)
Equinox means "equal night" in Latin, capturing the idea that daytime and nighttime are equal lengths everywhere on the planet.
That is true of the Sun's presence above the horizon, though it does not account for twilight, when the Sun's rays extend from beyond the horizon to illuminate our gas-filled atmosphere.

Read more about the March Equinox from Date and Time