How OCEARCH tagged and released the first great white in Florida waters, Lydia.


A great white shark called Lydia is about to make history as the first of its species to be seen crossing from one side of the Atlantic to the other.
The satellite-tagged 4.4m-long female is currently swimming above the mid-Atlantic ridge - which marks a rough boundary line between east and west.
Lydia was first tagged off Florida as part of the Ocearch scientific project.
The shark has travelled more than 30,500km (19,000 miles) since the tracking device was attached. 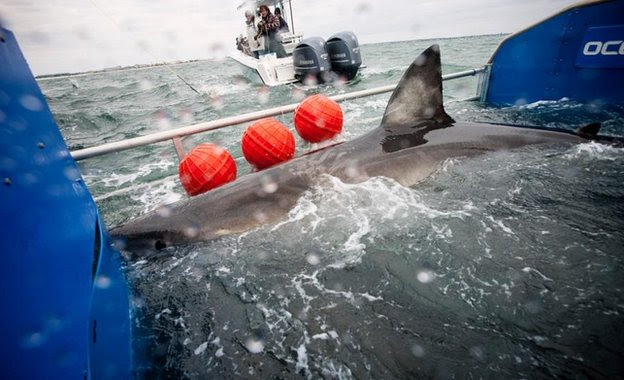 Dr Gregory Skomal, senior fisheries biologist with Massachusetts Marine Fisheries, told BBC News: "No white sharks have crossed from west to east or east to west."
Lydia is now roughly 1,600km (1,000 miles) from the coasts of County Cork in Ireland and Cornwall in Britain, and nearly 4,800km (3,000 miles) from Jacksonville, Florida, where she was tagged by scientists in March 2013. 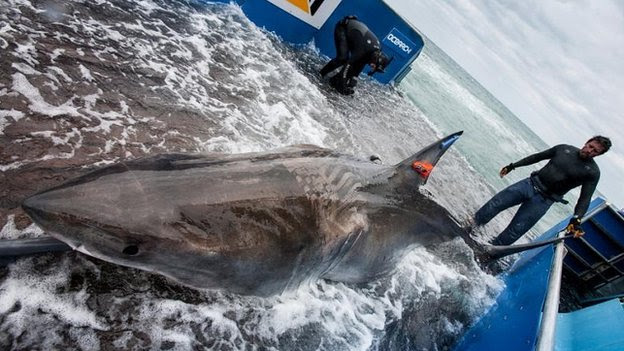 Dr Skomal explained: "Although Lydia is closer to Europe than North America, she technically does not cross the Atlantic until she crosses the mid-Atlantic ridge, which she has yet to do.
"She would be the first documented white shark to cross into the eastern Atlantic."
The mere act of tagging a great white shark (Carcharodon carcharias) is a feat in itself.
The scientists have been using a custom-built 34,000kg (75,000lb) capacity hydraulic platform, operated from their research vessel the M/V Ocearch, to safely lift mature sharks so that researchers can tag and study them. 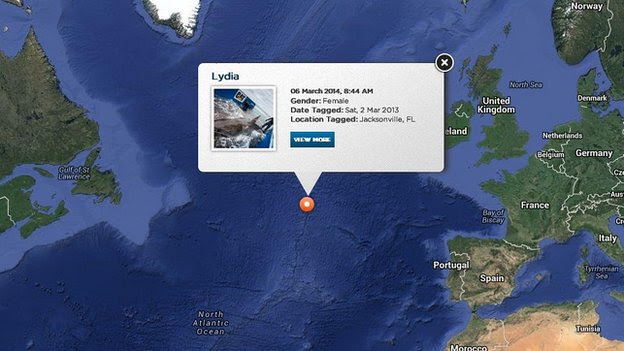 Lydia is over the underwater mountain system known as the Mid-Atlantic ridge and is now roughly 1,600km (1,000 miles) away from the British Isles
see Ocearch shark tracker

The Ocearch project was initiated to gather data on the movements, biology and health of sharks for conservation purposes as well as for public safety and education.
Though Lydia's journey is impressive, the sharks are known for their marathon migrations of thousands of kilometres.
A great white nicknamed Nicole travelled from South Africa to Australia and back - a circuit of more than 20,000km (12,400 miles) - over a period of nine months between November 2003 and August 2004.
As for where Lydia might go next, Dr Skomal explained: "We have no idea how far she will go, but Europe, the Med, and the coast of Africa are all feasible."