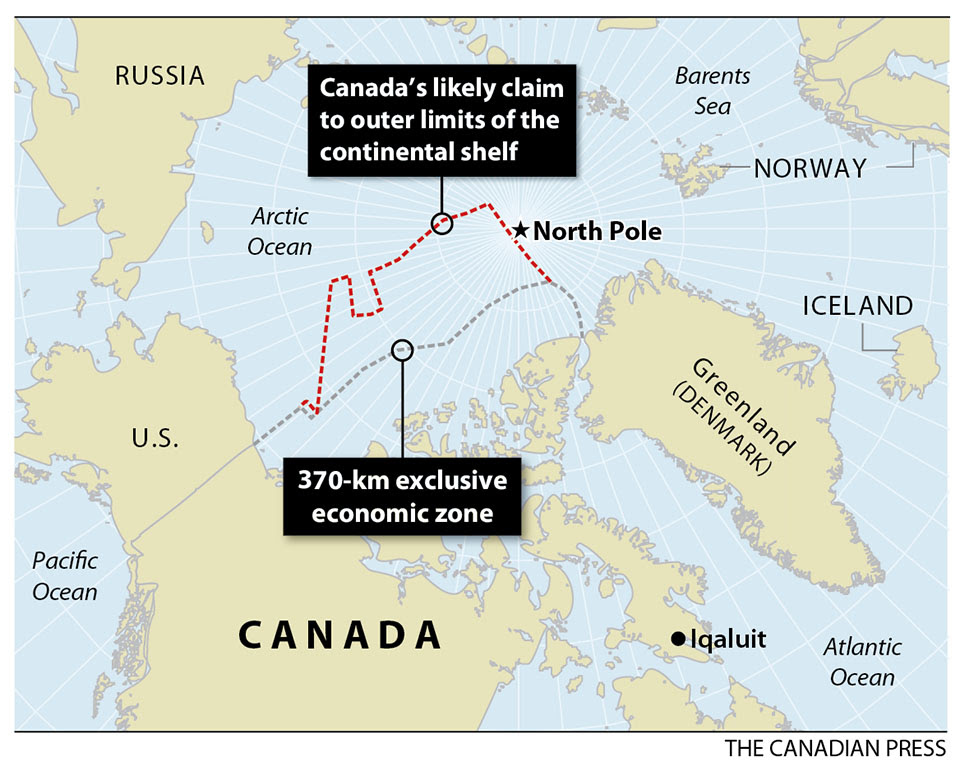 Canada, Denmark, Norway, Russia and the United States claim overlapping parts of the region believed to be rich in hydrocarbons,
and have been rushing to gather evidence in support of their respective claims.
(Canadian Arctic Oil & Gas reference map from Pew)

Some time this week, Canada is expected to make its case to the world to dramatically expand its boundaries by an area equivalent to the size of all three Prairie provinces.

Arctic topography / Arctic bathymetry
According to the US Geological Survey, the Arctic seabed is thought to hold about 90 billion barrels of oil and 30 percent of the world’s undiscovered gas resources.

Canada's deadline is Friday to apply to a United Nations commission for exclusive rights to what is likely to be another 1.7 million square kilometres of Arctic seafloor.
The application under the Convention on the Law of the Sea will be the culmination of a decade of work and more than $200 million in public money.

The lines on the map will have been drawn by scores of scientists working everywhere from Ottawa labs to ice camps off the northern shores of Ellesmere Island, peering under the stormy black waters to discern the shape and composition of sea floor thousands of metres below.

The effort required more than a dozen icebreaker voyages, as well as trips by helicopters, airplanes and an unmanned, remote-controlled submarine that spent days under the ice. 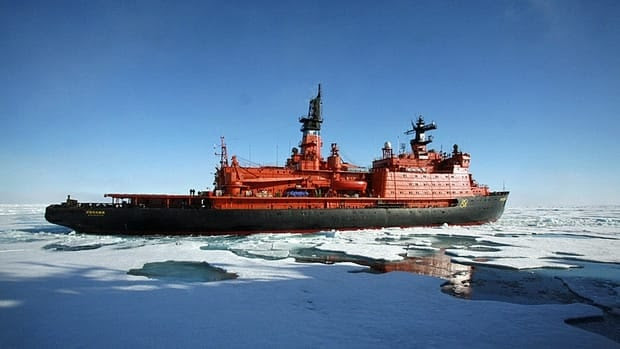 The effort to map the Arctic seafloor required more than a dozen icebreaker voyages, as well as trips by helicopters, airplanes and an unmanned, remote-controlled submarine that spent days under the ice.
(Vladimir Chistyakov/Associated Press)

With the co-operation of three Arctic neighbours — Denmark, Russia and the United States — more than 18,000 kilometres of sea-floor data was collected from a part of the globe less familiar than the surface of the moon.
"It was a huge effort and enormously challenging," said Michael Byers, an expert on Arctic and international law at the University of British Columbia.

The United Nations Convention on the Law of the Sea governs which nations exert what kinds of controls over their surrounding waters.
In addition to the 22-kilometre territorial waters and the 370-kilometre exclusive economic zones, coastal countries are allowed to claim additional sea floor if they can show their continental shelf extends beyond the economic zone.

A Canadian nautical map charts the Canadian coastline in Nares Straight which separates Ellesmere Island with Greenland.
The old Soviet Union may have been just as familiar with Canada's Arctic waters as Canadians.
Sections of Cold-War-era nautical charts obtained by The Canadian Press suggest that Russian mariners have for decades possessed detailed and accurate knowledge of crucial internal waterways such as the Northwest Passage.
Canada is to file a claim to expand its Arctic seafloor boundaries this week.
(Michael Byers/The Canadian Press)

Canada has previously released maps on the likely boundaries of its claim.

Artur Chilingarov, the veteran explorer who led the expedition to plant a Russian flag on the seabed at the North Pole in 2007, told Russia's claim to a portion of the Arctic shelf

Russia filed its claim in 2002 and Denmark released its last week.
The U.S. has not signed the convention, but has agreed to follow most of its articles.
Its boundary dispute with Canada involves the exclusive economic zone and doesn't directly impact Friday's claim. 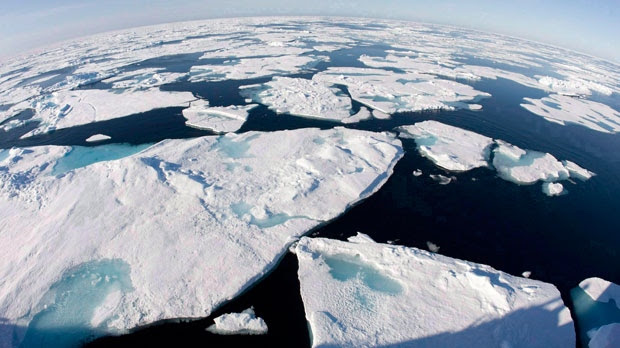 Conflicts are likely to be few.
One calculation puts the amount of overlap between claims at a mere 75,000 square kilometres out of millions and millions.
Rob Huebert, an Arctic expert at the University of Calgary, will be watching to see if Canada stretches its claim past the North Pole.
The geologic justification — an undersea mountain range called the Lomonosov Ridge that stretches north from Ellesmere Island — is there, he said.
"I don't think there's something magical that stops [the claim] at the North Pole," he said.

Canadian officials have acknowledged mapping flights over the top of the world and into Russia's claim, which does stop at the pole.
But Byers said there's no evidence that Canada has collected the kind of data it would need to challenge Russia.
"We may have some small overlaps in the middle, but for the most part there will not be any overlap between the Russian submission on the one side and the Canadian and Danish submissions on the other," he said.

It all depends on how valuable Canadian officials think that real estate is, said Huebert.
"Maybe it's simply not worth it. Maybe we said, 'You know what, for the sake of international peace and stability, it's not important. We'll only do our science up to that and that will be the basis of our claim.'
"[But] it means we didn't go as far as we could."

Whether or not Canada will claim the North Pole, a decision on its fate is still probably 20 years off. Just checking the science on Canada's claim will likely take five years, said Huebert.
And there isn't any particular rush, said Byers.
These claims cover some of the remotest and harshest points on the planet and commercial exploitation of resources is a long ways off.
But just getting to the point where countries have filed claims is a triumph, he said.
"In this former Cold War frontier we have an agreed set of rules. That has a huge payoff."