Adventures in Oceanography - Perspectives on Ocean Science
Join research oceanographer and photographer Dale Stokes for a global photographic journey featuring ships, submarines, underwater habitats, and both poles.
This presentation includes a decade of images documenting exotic locations underwater and topside and a variety of unusual vessels and research instruments.

For an oceanographer, life aboard in the middle of gigantic waves means gravity cannot be trusted

Mountains of water are rolling towards us, covered in an army of huge breaking waves.
Winds hitting 75mph are blowing the surface of the ocean away, and whatever is left is white with foam.
The ship is facing directly into the wind, riding over the top of it all, juddering and bumping as it clings to the place where the sea touches the sky.
On the bridge, the chief scientist is grinning as though all his Christmases have come at once.
After four years of planning, this has turned out better than we dared hope.
All that violence outside means that the ocean is doing something important – taking a really, really deep breath.
And we are here to study it.

I like living on ships.
A ship is a little floating village, a temporarily self-sufficient sliver of human society.
The ocean is not our habitat, but it's amazing how much a steel bubble can help you live in denial.
This particular glorified tin can is the R/V Knorr, an 85-metre research vessel carrying 20 crew and 12 scientists.
For six weeks, the ship and everything inside her is all we've got.

A couple of weeks ago, the chief engineer prowled though the main lab, then pounced on a small cardboard box holding tools.
The explanation came in a slow Boston drawl: "D'you mind if I take my box back? Boxes are rare around these parts.
" He removed the tools and disappeared into the bowels of the ship, clutching his cardboard box.
On land, nothing comes cheaper than cardboard.
On a ship, a box matters.

The one thing we're not short of is ocean.
We are in the north Atlantic, hundreds of miles from land.
There is nothing to look at except water and sky, and what we see would be familiar to any seafarer in history.
But we are here to study something that was invisible to them, even though it was right in front of their noses.
Around this ship, all the time, the ocean is breathing.
My lungs and yours have a huge area – 70 square metres – and that surface helps you to take oxygen from the air and give back carbon dioxide.
What I can see from the top of the ship is the lungs of the ocean, the vast but thin layer right at the top of the sea.
Oxygen, carbon dioxide, nitrogen and lots of other gases travel both ways across that boundary all the time. 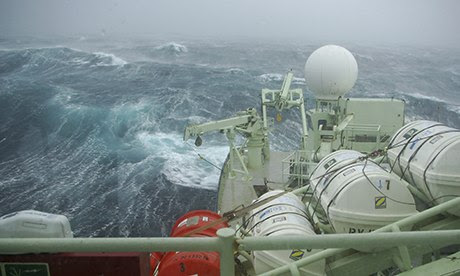 The view from the Knorr when the what was called the St Jude storm in Britain hit.
Photograph by Ian Brooks

Most importantly, about a third of all the extra carbon dioxide humanity puts into the atmosphere is being sucked up by the oceans.
This area is one of the places where it is breathing in.
Calm ocean isn't very efficient at breathing, but when the wind blows, the surface becomes more turbulent and breaking waves and bubbles vastly increase the surface area.
As the wind blows faster, the ocean breathes more deeply.
Even a single storm is disproportionately important.
Understanding these storms means a better understanding of our planet, and a better ability to predict weather and the implications of changes to our climate.
So here we are, bobbing about on the lungs of the ocean.

Gravity is untrustworthy on a ship in bumpy seas.
We tend to take the "downwards" nature of gravity completely for granted, a reasonable approach in most circumstances.
But out here, it's fickle.
In the shower, you have to chase the shower flow around, because it keeps falling in different directions.
I haven't stood a shampoo bottle up for weeks because there's no point.
The only way to be sure something will be there when you get back is to make it a prisoner, with tape, straps, Velcro, string and whatever else you can find.
Electronics, computers, tools and books must all be captive, and only the human beings float free.

Tasks like fixing electronics seem to take forever.
First you wedge yourself against the bench so you're steady enough to hold the screwdriver in the right place.
Then, at the crucial moment, the ship bumps and the tiny fiddly screw that was the object of your attention will make an enthusiastic aerial bid for freedom.
Gathering the escapees is like herding cats, and then you have to start all over again. 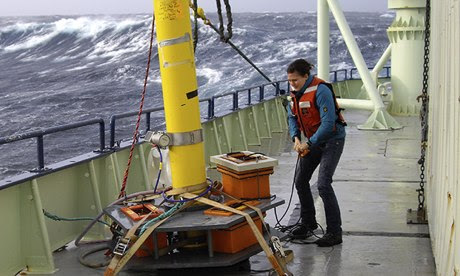 I know you won't believe me when I say this, but one problem we don't have is seasickness.
Most people who do feel nauseous get over it completely within three or four days.
It's common to feel drowsy for longer than that, but it's hard to separate that from the semi-permanent sleep-deprivation.
Floating is quite a nice feeling, until you arrive back on your bunk with a thump.
My cabin is in the middle of the ship, so I don't get to float quite as much as some, but I still have to wedge myself in so that I don't slide up and down the mattress as the ship rolls.
Some mornings even the night owls turn up to early breakfast, after the nights when they gave up pretending to sleep.

But there's a good reason for putting up with all this.
This is where the action is.
We are a large collaborative scientific team, essential because there are so many interconnected features to measure.
We have two "nostrils" on the ship – one above and one below the waterline.
They're sniffing the air and water for carbon dioxide and other trace gases so we can work out how much is going in to or out of the ocean at each moment.
Buoys float close to the ship to measure the precise details of the waves.
My contribution is attached to the biggest buoy of the bunch: it's the suite of instruments that are spying on the millions of bubbles beneath the surface.

The bubble buoy is 11 metres long and weighs about half a tonne.
Getting it safely on and off the ship takes two cranes, about eight people and a lot of shouting from the bosun.
But when it's floating out in a storm, it looks very small.
Anyone can see the foam patches left on the surface by breaking waves, but this buoy lets us see what's hidden just underneath.
Breaking waves will leave behind bubble plumes that could be many metres in size, and each bubble has the potential to transport a tiny puff of gas up or down.
It still astonishes me that such minuscule things can make a contribution to how our planet works.
But there are billions of them, and they do.

Splotches of colour on weather maps dictate our lives.
Storms cross this part of the ocean from east to west every few days, and each one will take a couple of days to pass over us.
Each morning, after my 10-second commute, the first task is to look at the ship's intraweb to see where we are.
It doesn't make much difference, but I feel the need to look anyway.
Then I check what day it is.
That doesn't make much difference either, but it seems important to know.

Then I get to the weather forecasts, which do make a difference.
Blues mean low winds, and red is high.
Two weeks into the trip, a storm with a fuchsia-pink centre appeared to the east.
Bright pink like that is on its way off to the top of the wind speed scale.
While it was still calm, we put the buoy in the water, packed away almost everything, strapped down whatever was left, and waited.

The night before the height of the storm, no one slept.
At breakfast, clutching the table and his coffee, the chief scientist was gleefully repeating "65 knots!" over and over again.
Even the bosun admitted that it was "blowing a bit".
I spent the morning on the bridge, looking out over seas that were fiercer than I had ever dreamed possible.
The average waves were 10 metres high, the highest 15 metres, and I just couldn't stop looking.
When it arrived in the UK three days later, this became known as the St Jude storm.

Being able to measure in these conditions felt like winning the lottery.
We have a huge amount of very valuable data from the rest of the trip, but this was a first glimpse at the effect of the strongest winds of all.
The ocean has been kind to us, in a tough love kind of way.

I've been on this ship for 35 days, and we will arrive in port tomorrow.
I'm bruised from the bumpy ride, yearning for a good night's sleep (preferably with a proper duvet) and fidgeting from cabin fever.
I can't wait to walk on solid ground, and to go swimming and running again.

But it's been worth it to be immersed in the environment out here, and to spend time on the other surface of our planet, the one that flows and splashes and never stays still.
The vast blue of our blue planet is so easy to forget when you live on the land.
But it's always out there, and this trip has reminded me of how dynamic, how beautiful – and how important it is for the Earth.