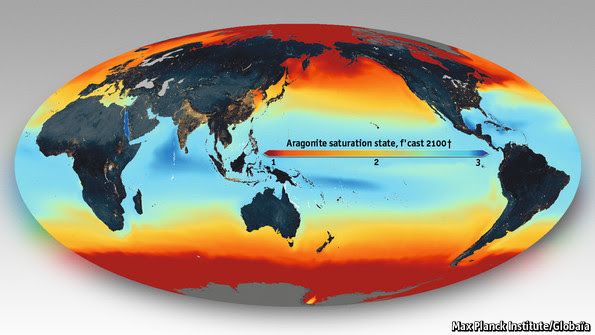 The world’s seas are becoming more acidic.
How much that matters is not yet clear.
But it might matter a lot.

Humans, being a terrestrial species, are pleased to call their home “Earth”.
A more honest name might be “Sea”, as more than seven-tenths of the planet’s surface is covered with salt water.
Moreover, this water houses algae, bacteria (known as cyanobacteria) and plants that generate about half the oxygen in the atmosphere.
And it also provides seafood—at least 15% of the protein eaten by 60% of the planet’s human population, an industry worth $218 billion a year.
Its well-being is therefore of direct concern even to landlubbers.

That well-being, some fear, is under threat from the increasing amount of carbon dioxide in the atmosphere, a consequence of industrialisation.
This concern is separate from anything caused by the role of CO2 as a climate-changing greenhouse gas.
It is a result of the fact that CO2, when dissolved in water, creates an acid.

That matters, because many creatures which live in the ocean have shells or skeletons made of stuff that dissolves in acid.
The more acidic the sea, the harder they have to work to keep their shells and skeletons intact.
On the other hand, oceanic plants, cyanobacteria and algae, which use CO2 for photosynthesis, might rather like a world where more of that gas is dissolved in the water they live in—a gain, rather than a loss, to ocean productivity.

Two reports attempting to summarise the world’s rather patchy knowledge about what is going on have recently been published.
Both are the products of meetings held last year (the wheels grind slowly in environmental bureaucracy).
One, in Monterey, California, looked at the science.
The other, in Monaco, looked at possible economic consequences.
Together, the documents suggest this is an issue that needs to be taken seriously, though worryingly little is known about it. 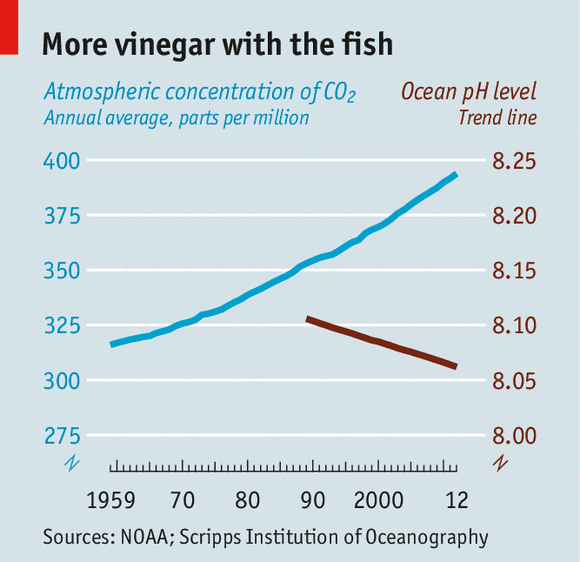 Regular, direct measures of the amount of CO2 in the air date to the 1950s.
Those of the oceans’ acidity began only in the late 1980s (see chart).
Since it started, that acidity has risen from pH 8.11 to pH 8.06 (on the pH scale, lower numbers mean more acid). This may not sound much, but pH is a logarithmic scale.
A fall of one pH point is thus a tenfold rise in acidity, and this fall of 0.05 points in just over three decades is a rise in acidity of 12%.

Patchier data that go back further suggest there has been a 26% rise in oceanic acidity since the beginning of the industrial revolution, 250 years ago. Projections made by assuming that carbon-dioxide emissions will continue to increase in line with expected economic growth indicate this figure will be 170% by 2100.

Worrying about what the world may be like in nine decades might sound unnecessary, given more immediate problems, but another prediction is that once the seas have become more acidic, they will not quickly recover their alkalinity.
Ocean life, in other words, will have to get used to it.
So does this actually matter?

The variable people most worry about is called omega.
This is a number that describes how threatening acidification is to seashells and skeletons.
Lots of these are made of calcium carbonate, which comes in two crystalline forms: calcite and aragonite.
Many critters, especially reef-forming corals and free-swimming molluscs (and most molluscs are free-swimming as larvae), prefer aragonite for their shells and skeletons.
Unfortunately, this is more sensitive to acidity than calcite is.

An omega value for aragonite of one is the level of acidity where calcium carbonate dissolves out of the mineral as easily as it precipitates into it.
In other words, the system is in equilibrium and shells made of aragonite will not tend to dissolve. Merely creeping above that value does not, however, get you out of the woods.
Shell formation is an active process, and low omega values even above one make it hard.
Corals, for example, require an omega value as high as three to grow their stony skeletons prolifically.

As the map above shows, that could be a problem by 2100.
Low omega values are spreading from the poles (whose colder waters dissolve carbon dioxide more easily) towards the tropics.
The Monterey report suggests that the rate of erosion of reefs could outpace reef building by the middle of the century, and that all reef formation will cease by the end of it.


Acidic Oceans: Why Should We Care? - Perspectives on Ocean Science
The ocean absorbs almost half of the carbon dioxide emitted by human activities, changing its chemistry in ways that may have significant effects on marine ecosystems.
Join Scripps marine chemist Andrew Dickson as he explains what we know -- and what we don't -- about this emerging problem.

Other species will suffer, too.
A study published in Nature last year, for example, looked at the shells of planktonic snails called pteropods.
In Antarctic waters, which already have an omega value of one, their shells were weak and badly formed when compared with those of similar species found in warmer, more northerly waters.
Earlier work on other molluscs has come to similar conclusions.

Not everything suffers from more dissolved CO2, though.
The Monterey report cites studies which support the idea that algae, cyanobacteria and sea grasses will indeed benefit.
One investigation also suggests acidification may help cyanobacteria fix nitrogen and turn it into protein.
Since a lack of accessible nitrogen keeps large areas of the ocean relatively sterile, this, too could be good for productivity.

The Monaco report attempts to identify fisheries that will be particularly affected by these changes.
These include the Southern Ocean (one of the few areas not already heavily fished) and the productive fishery off the coast of Peru and northern Chile, where upwelling from the deep brings nutrients to the surface, but which is already quite acidic.
The principal threat here, and to similar fisheries, such as that off the west coast of North America, is to planktonic larvae that fish eat.
Oyster and clam beds around the world are also likely to be affected—again, the larvae of these animals are at risk.
The report does not, though, investigate the possibility of increases in algal plankton raising the oceans’ overall productivity.

At the back of everyone’s mind (as in wider discussions of climate change) are events 56m years ago.
At that time, the boundary between the Palaeocene and Eocene geological epochs, carbon-dioxide levels rose sharply, the climate suddenly warmed (by about 6°C) and the seas became a lot more acidic.
Many marine species, notably coccolithophores (a group of shelled single-celled algae) and deep-dwelling foraminifera (a group of shelled protozoa), became extinct in mere centuries, and some students of the transition think the increased acidity was more to blame for this than the rise in temperature.
Surface-dwelling foraminifera, however, thrived, and new coccolithophore species rapidly evolved to replace those that had died out.

On land, too, some groups of animals did well.
Though the rise of the mammals is often dated from 66m years ago, when a mass extinction of the dinosaurs left the planet open for colonisation by other groups, it is actually the beginning of the Eocene, 10m years later, which marks the ascendancy of modern mammal groups.

Oceanic acidity levels appear now to be rising ten times as fast as they did at the end of the Palaeocene.
Some Earth scientists think the planet is entering, as it did 56m years ago, a new epoch—the Anthropocene.
Though the end of the Palaeocene was an extreme example, it is characteristic of such transitions for the pattern of life to change quickly.
Which species will suffer and which will benefit in this particular transition remains to be seen.