ORACLE TEAM USA founder Larry Ellison jumped aboard his sleek and swift AC72 moments after the crew had crossed the finish line of Race 19 of the 34th America's Cup, a winner-take-all race.
"I wanted to let them know they'd just won the America's Cup," said Ellison.
"And that's what I told them; that's what I said."
The victory brought to a close the America's Cup in San Francisco.
The event ended on a high note with the captivating match between ORACLE TEAM USA and Emirates Team New Zealand, one that took 19 races in 19 days to complete.

There are comebacks -- and then there are comebacks.
As the stars and stripes billowed in the San Francisco wind, Oracle Team USA produced one of the most monumental triumphs in sporting history.
For a team which had stared into the abyss, trailing 8-1 at one stage, Oracle did what nobody outside of its catamaran believed it could do.
Oracle, which defeated the Swiss team Alinghi three years ago, held onto its title when it seemed certain to suffer one of the most humiliating defeats the America's Cup had ever seen. 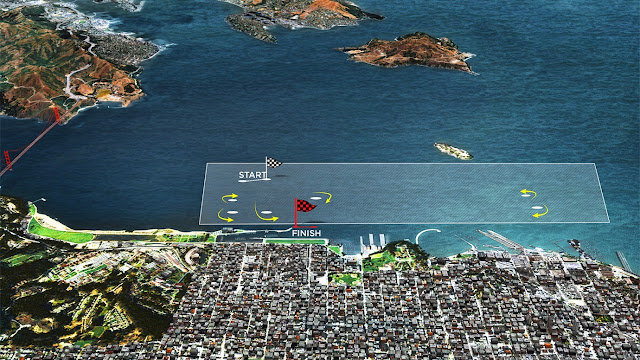 "It had everything," said Oracle skipper Jimmy Spithill told Sky Sports.
"It was fantastic. We wouldn't have had it any other way. The guys showed so much heart."
Backed by billionaire Larry Ellison, who owns a 25% in Oracle, the team pulled off a fairytale ending which money just cannot buy.
The 69-year-old, whose personal fortune is estimated at $41 billion by Forbes Magazine, boarded the boat to take part in the celebrations following a titanic tussle.

After staging an improbable comeback from 7 points behind and with no margin for error, ORACLE TEAM USA has forced a winner-take-all race tomorrow for the 34th America's Cup after sweeping both races today.
ORACLE TEAM USA won Race 17 by 27 seconds and Race 18 by 54 seconds and now stands even with Emirates Team New Zealand on the scoreboard with 8 points each.
Only twice before in the 162-year history of the America's Cup has there been a winner-take-all final race, in 1920 and 1983. In 1920 the defender won and in '83 the challenger won.

The Kiwis have been on match point since last Wednesday, Sept. 18, but now face the possibility of watching the defender stage perhaps the most historic comeback in sport. Already ORACLE TEAM USA has won 10 races, but has 8 points because of a penalty imposed by the International Jury.

The America's Cup is the oldest trophy in international sport -- but rarely has sailing's pinnacle event ever been so dramatic.
It speaks volumes that even those who had barely heard of the event last week suddenly became hooked on a race which has been going since 1851.
And yet this contest should have been all over before Wednesday's fantastic finale with Emirates Team New Zealand having stormed into an 8-1 lead.
In fact, the challenger should have wrapped up the title with victory in race 13 only for it to be abandoned with its yacht just two minutes from the finish line because of a time limit rule.
When the race was rescheduled, Oracle Team USA picked up the win which kept its hopes of a historic comeback alive.
Only on two occasions has the destination of the trophy been unknown going into the final race of the competition.
Oracle has appeared determined to make life difficult for itself since the start of its defense.
The team was given a two point penalty and fined $250,000 after illegally placing lead pellets in their catamarans to gain extra weight.
The incident also cost three crew members their place on the team.

Racing in AC-72 catamarans, the first time these boats have been used in the competition, the crews expect to sail at around 40 knots or 74 kilometers an hour.
Excitement is never far away -- but then again, never is danger.
Only last March, British sailor Andrew Simpson died after being trapped under a catamaran in an America's Cup training session with Swedish team Artemis.
Last October, the Oracle team came perilously close to an accident of their own, while the Emirates boat has also had its own share of scary moments.
But this past fortnight has brought sailing to the forefront of world sport with Oracle's miraculous fightback set to go down as one of the greatest of all time.
With both teams needing to win the race to get its hands on the trophy, a tight fought affair was expected.

But despite a good start from Team New Zealand, it was the reigning champion which dominated.
Led by Britain's four time Olympic gold medalist Ben Ainslie, who replaced John Kostecki as the team tactician with the score at 4-1, Oracle roared back in dramatic fashion.
Ainslie is the first Briton to experience victory at the event since Charlie Barr led the American team Columbia to three consecutive victories in 1899, 1901 and 1903.
The champagne was in full flow by the time Oracle made it back to dry land with fans in raptures at the side of the port.
"It really is all about the team," added Spithill. "On your own you're nothing, the team make you look great.
"I'm so proud of the boys. We were staring down the barrel at 8-1 but the boys didn't even flinch. It was a fantastic team effort."

Team New Zealand skipper Dean Barker was left inconsolable at the conclusion of the titanic tussle.
He added: "I'm incredibly proud of the team and what they've achieved but gutted we didn't get the last win we needed to take the cup back to New Zealand.
"It's hard to swallow."