Image of the week : clouds off the California coast 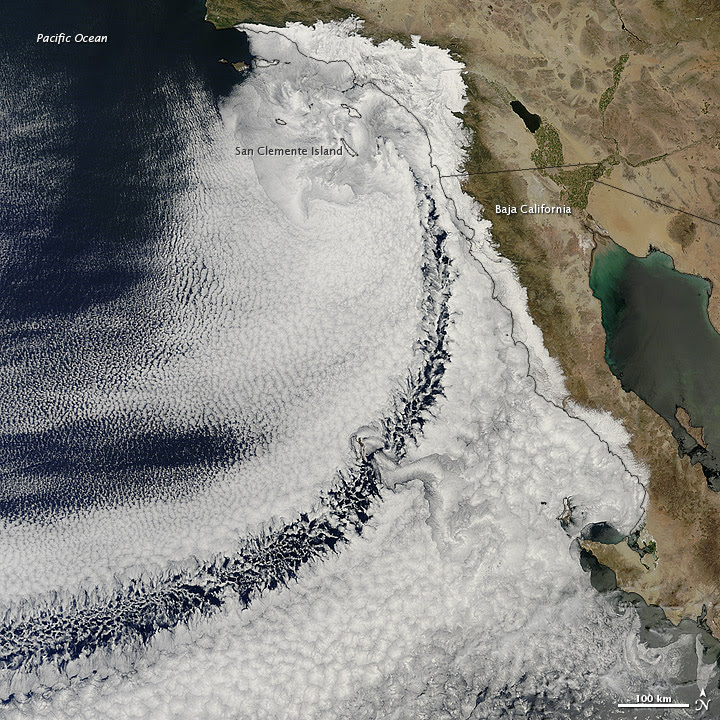 On April 14, 2013, the Moderate Resolution Imaging Spectroradiometer (MODIS) on NASA’s Terra satellite observed a striking cloud formation off the California coast.
A cloudbank hugged the coastlines of California and Baja California, spanning hundreds of kilometers north to south and east to west. Within the cloudbank was an arc of mostly clear sky.
Curving toward the southwest, the arc extended more than 1,000 kilometers (600 miles) over the Pacific Ocean.

Bob Cahalan of NASA’s Goddard Space Flight Center explains that the cloudbank consisted of stratocumulus clouds, and the arc was probably a wake caused by an obstacle to air flow, perhaps San Clemente Island. Islands that are tall enough can easily interrupt air flow over the ocean, and when clouds are present, they make such disruptions visible in photo-like imagery.
Wakes from the Juan Fernandez Islands off Chile provide another example of this phenomenon.
Posted by Peio at 1:00 AM