Who, what, why: why build a ship tunnel?

The Norwegian government has backed an ambitious plan to create the world's first ship tunnel.
But why has nobody tackled this engineering feat before?

Ship canals have long been used to make journeys more direct and safer but the Stad peninsula is a mountainous divide, peaking at 645m, between the Norwegian Sea to the north and the North Sea to the south.

Norway has a reputation as the world-leader in tunnelling.
They have already achieved the world's longest road tunnel.
While it will be the first proper ship tunnel, the engineering behind it will not involve radical innovation.

Instead of carving out a slice of the landscape for a canal, engineers will drill and blast through the rock at sea level before removing the dams so the sea can flood a 12m (39ft) deep channel for ships to travel in.

"It isn't an unheard of challenge, it involves building a cofferdam [a watertight enclosure] at either end to keep the water out until excavation is complete," explains Robert Benaim, Fellow of the Royal Academy of Engineering.

The Stad peninsula on Norway's western coast is notorious for heavy weather that can endanger ships - the country's highest wind speeds are commonly recorded on the promontory and ships are routinely delayed by stormy conditions.

A recent review also found 46 accidents and near-accidents and 33 deaths had occurred in the waters since the end of World War II. Randi Humborstad, project leader at Nordfjord Vekst, the organisation behind the tunnel plans, cites a 161-passenger cruise ship that was almost shipwrecked in 2004 as further evidence of the area's fierce conditions. 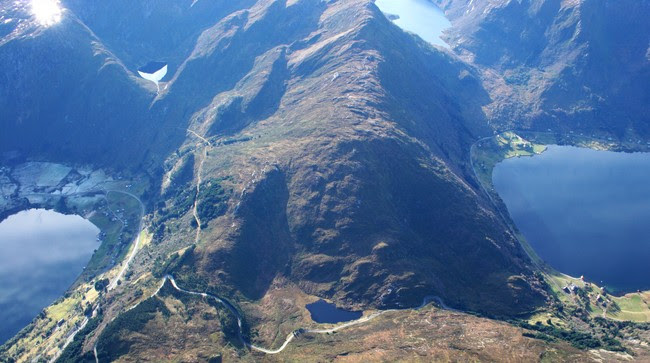 The tunnel is not to save time.
It will take as long to go through it as it would take to go around, admits Humborstad.
But taking the weather out of the equation will improve safety and trade links in the area.

In a country where the shipping industry is the second most important after gas and oil, the tunnel makes sense, Humborstad suggests.
"As the sea is the backbone of transport along the west coast of Norway, public transport could be upgraded with improved regularity in cargo services and a new year-round high-speed passenger ferry service between the coastal cities of Bergen and Alesund."

Despite its unique size and location, the tunnel is "not of massive engineering significance", according to geo-technical engineer Prof David Richards from the University of Southampton.

Richards compares the ship tunnel to existing canal tunnels, the only difference being scale and the resulting expense involved in drilling out and disposing of such sizeable rock spoils.
It is the expense that has kept the project on the back-burner since it was first dreamed up in the 19th Century.
The budget is an estimated 1.7 billion kroner (£193 million).

Since the ship tunnel plan began to gain support in the 1980s, there have been 18 separate studies to assess whether it offers value to society.

There are still question marks.

According to Prof Knut Samset at the Norwegian University of Science and Technology, who has conducted research into the project, the tunnel is "far from economically viable".
Despite the government's backing, the plan must still be approved by parliament.
In Norway safety and trade concerns may justify the spending of millions.
But the world's first ship tunnel may not see a competitor from elsewhere in the world any time soon.