NOAA's planned charts of the Arctic 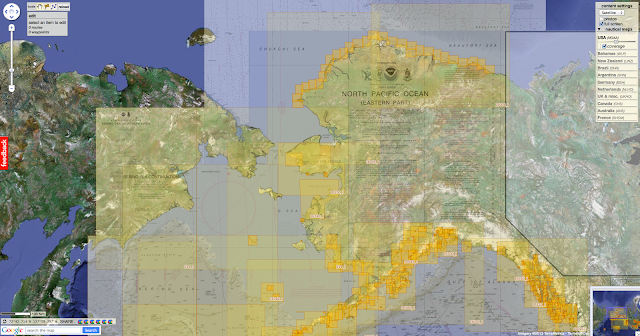 The update came after consultations with maritime interests and the public, as well as with other federal, state, and local agencies.
“As multi-year sea ice continues to disappear, vessel traffic in the Arctic is on the rise,” said Rear Admiral Gerd Glang, NOAA Coast Survey director.
“This is leading to new maritime concerns about adequate charts, especially in areas increasingly transited by the offshore oil and gas industry and cruise liners.”
“Given the lack of emergency response infrastructure in remote Arctic waters, nautical charts are even more important to protect lives and fragile coastal areas,” Glang said.

Commercial vessels depend on NOAA to provide charts and publications with the latest depth information, aids to navigation, accurate shorelines, and other features required for safe navigation in U.S. waters.

But many regions of Alaska’s coastal areas have never had full bottom bathymetric surveys, and some haven’t had more than superficial depth measurements since Captain Cook explored the northern regions in the late 1700s.
“Ships need updated charts with precise and accurate measurements,” said Capt. Doug Baird, chief of Coast Survey’s marine chart division.
“We don’t have decades to get it done. Ice diminishment is here now.”

NOAA Ship Fairweather at anchor near the Bering Strait in 2010, courtesy of NOAA

NOAA plans to create 14 new charts to complement the existing chart coverage.
For example, seven of the charts will complete chart coverage from the Alaska Peninsula to Cape Lisburne at the edge of the North Slope, and more charts support the future maritime transportation infrastructure in the coastal areas north of the Aleutian Islands.

NOAA has been taking stakeholder feedback since the first Arctic Charting Plan was issued in 2011. One improvement called for additional detail to the Kotzebue Harbor and Approaches chart, which was published as the first plan-inspired new chart, in April 2012.

Mariners and the interested public can submit comments through the Coast Survey Inquiry and Discrepancy System online.

These latest efforts also support the objectives of the National Ocean Policy that foster understanding of changing conditions in the Arctic, and focus on ocean, coastal, and Great Lakes observations, mapping, and infrastructure by strengthening mapping capabilities into a national system and integrating that system into international observation efforts.

NOAA’s Office of Coast Survey is the nation’s nautical chartmaker.
Originally formed by President Thomas Jefferson in 1807, Coast Survey updates charts, surveys the coastal seafloor, responds to maritime emergencies, and searches for underwater obstructions that pose a danger to navigation.
Follow Coast Survey on Twitter @nauticalcharts, and check out the NOAA Coast Survey blog at http://noaacoastsurvey.wordpress.com for more in-depth coverage of surveying and charting.
NOAA’s mission is to understand and predict changes in the Earth's environment, from the depths of the ocean to the surface of the sun, and to conserve and manage our coastal and marine resources. Join us on Facebook, Twitter and our other social media channels.