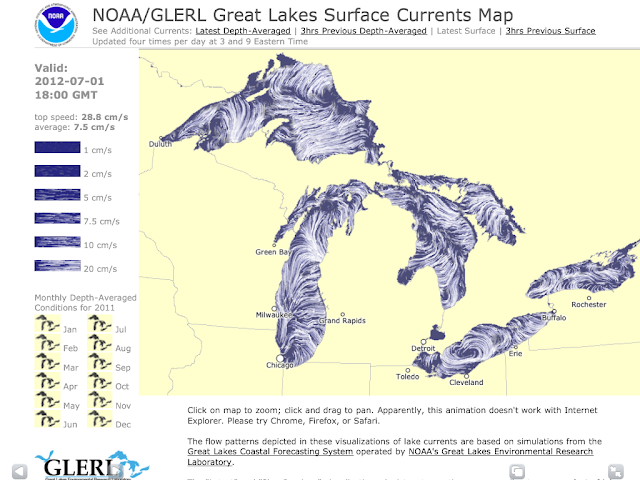 You can't normally see water currents or the wind.
Now you can: A computer code used to visualize wind has been adapted by researchers to show surface currents of the Great Lakes.

The code was originally developed to make a map of the wind by Fernanda Viégas and Martin Wattenberg, artists/technologists who lead Google's "Big Picture" visualization research group in Cambridge, Mass., according to their website.

The result? A stunning map of surface currents on the Great Lakes, as shown in this screenshot of the map on the laboratory's website from Oct. 3.

The code uses a computer model to visualize wind patterns, said David Schwab, a researcher at the laboratory who's in charge of the map.
The model is based on measurements of wind speed, air temperature and other variables at weather stations and buoys around the Great Lakes, Schwab told OurAmazingPlanet.
It's updated four times per day.

"I think a lot of people never realized how variable the currents are in the lakes," Schwab said.
He thinks the map will be useful for recreational boaters, fishermen and the shipping industry, as well as for generally increasing people's knowledge of the Great Lakes, he said.

Faster currents are shown as thicker white lines, and the speed of the current can be determined by zooming in on individual lines.

Lake Michigan Underwater Currents that was done in the late 1800's via bottle paper courses...
Posted by Peio at 1:05 AM