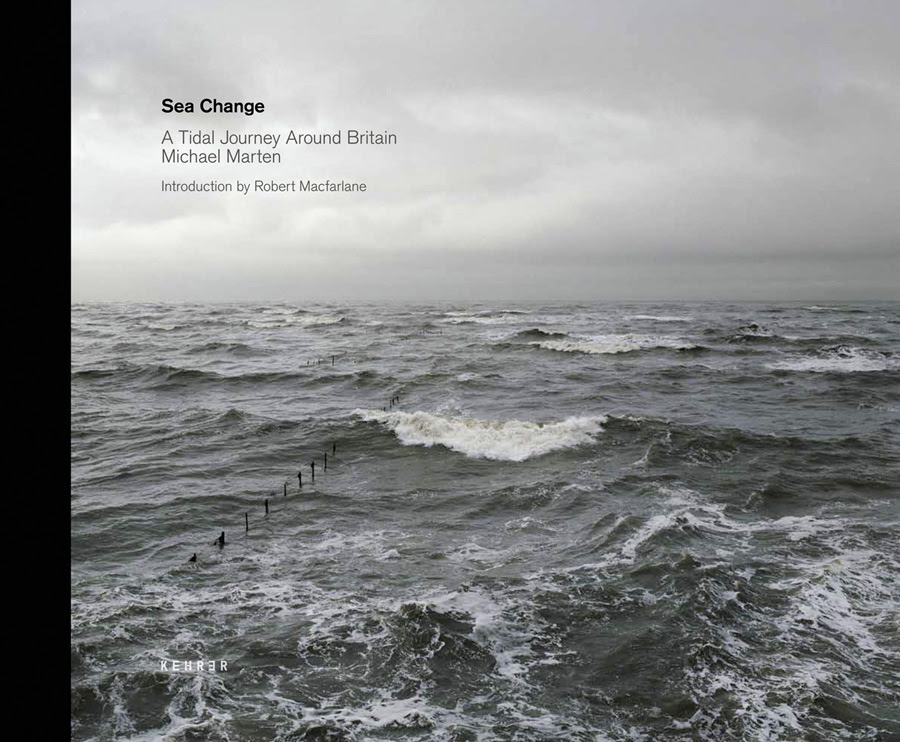 “... a sense of threat as well as one of miracle attends Marten’s images. The people who fill his beaches at low tide seem often still to be there at high tide, invisibly in their fixed positions, fatally swallowed by metres of sea.”- Robert Macfarlane


Since 2003 photographer Michael Marten has travelled around the British coast to photograph identical views at high and low tide, six or 18 hours apart.

St Cwyfan's, Anglesey: 'At midday, the church looks isolated and austere beneath a grey, rain-threatening sky. Later, the clouds are paler and kinder.'
Photograph: Michael Marten

See how the seascapes in his photographs are dramatically transformed by clicking on the vertical slider in the middle of the image and moving it left or right.

The British landscape photographer Michael Marten is, in his own words, "a student of tides".
In 2003, he spent a day photographing a set of rocks on the coast of Berwickshire and, afterwards, while reviewing his pictures, he realised that he had captured the same view at ebb and flood tide.
He realised, too, that the incoming sea had radically altered the perspective and the atmosphere of that stretch of landscape.

So began the nine-year journey around Britain's coastline that is distilled into the 105 colour images in Sea Change, a body of work that records landscapes defined by these two contrasting moments in time.

Marten's preparation for each set of photographs was painstaking.
He scanned tide-table charts and local coastal maps to find the best locations to set up his 5x4 camera and the exact times when the tide was at its lowest and highest.
"When I take the first picture of a tidal pair," Marten writes in his afterword, "I mark the position of my tripod with sticks and stones or scratch marks on rocks so that I can set up in the same position six hours later or the next day. I place a sheet of tracing paper on the ground glass screen of the 5x4 camera and, under my darkcloth, use a pencil to trace lines that will remain unchanged when the tide comes in or goes out: the horizon, a rock, a harbour wall, or distant headland."
Thus, the second image is meticulously framed exactly like the first.
The end result is a book of intriguing diptychs: some torrential; some busy, then deserted; some so radically different in atmosphere and detail that they seem to be entirely different landscapes.
Put simply, the sea changes everything, not just the land it covers, but the land around and beyond it.

Marten is also a master of tone and colour, and the photographs speak of the elements as much as the sea and the shore.
In Aberffraw on Anglesey, he captures St Cwyfan's church – known locally as "the church in the sea" – at midday at high water on 9 April this year.
It looks isolated and austere beneath a grey, rain-threatening sky, a place not so much of refuge as of pure isolation.
At 5.45pm on the same day, the tide has retreated way beyond the raised stone mound that the church squats on, and the clouds are paler and kinder.
The church looks part of the landscape, the same sandy colour as the sand and pebbles in the foreground. It also looks welcoming.

There are diptychs of tidal estuaries, famous beaches, coves, ports and crags that jut into the sea.
There is even a diptych of Crosby, Liverpool, where the artist Antony Gormley's cast-iron men stand submerged in water, then alone on a long, wide expanse of sand.
They look defiant even as the tide rises around them and over them.

As Robert McFarlane notes in his illuminating introductory essay, one of the most powerful aspects of Marten's photographs is "the cognitive dissonance between the serene and the sinister".
As sea levels rise inexorably, these beautifully strange images are ominous too in their evocation of what may come.