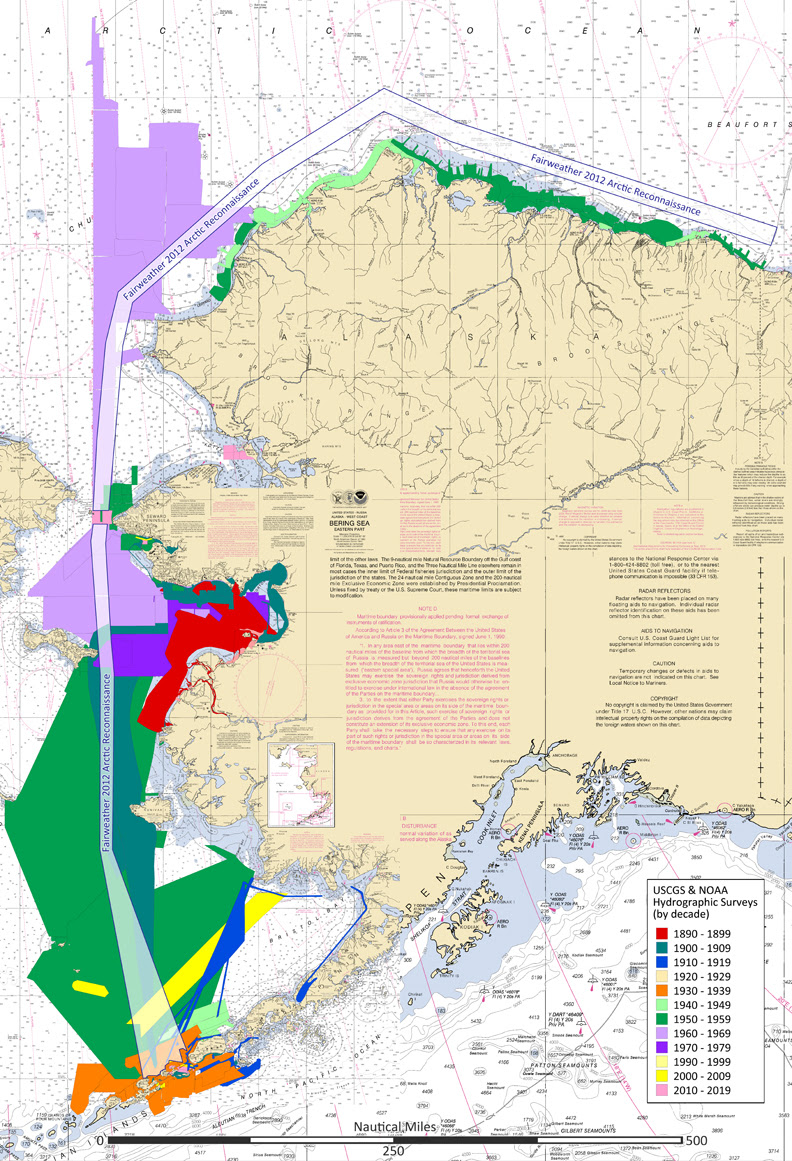 illustration was produced by John Whiddon, Coast Survey, Marine Chart Division
As indicated in this image, which displays the vintage of the U.S. Coast & Geodetic Survey (“geodetic” was added to the agency name in 1878) and NOAA soundings along the Fairweather reconnaissance path, vast swathes of lead line measurements were collected more than a hundred years ago.
Some of the small-scale charts in Alaskan waters use soundings from Captain Cook (1770s vintage) or even Vitus Bering (circa 1740).
While it is difficult to pinpoint exact sources, some soundings could also come from British Admiralty charts or Russian Empire charts.

NOAA’s Office of Coast Survey, Alaska, and the nation’s economic vitality have been intertwined for 145 years. We strengthen that bond on August 1, as NOAA Ship Fairweather begins a reconnaissance survey to the northernmost tip of the Alaska’s Arctic coast.
Fairweather will check soundings along a 1,500 nautical mile coastal corridor from Dutch Harbor, Alaska, to the Canadian border.
(At least, we hope Fairweather can go all the way to the Canadian border… The ice cover is a little stubborn this summer, and may not recede sufficiently for safe passage. CMDR Jim Crocker, the ship’s commanding officer and chief scientist of the party, will keep us updated through the coming weeks. Watch this blog site for Fairweather updates!)

Regardless of whether ice interferes with the final northern leg of the survey, the sounding samples acquired by Fairweather throughout the reconnaissance will provide critical information needed to prioritize NOAA’s future survey projects in the Arctic. 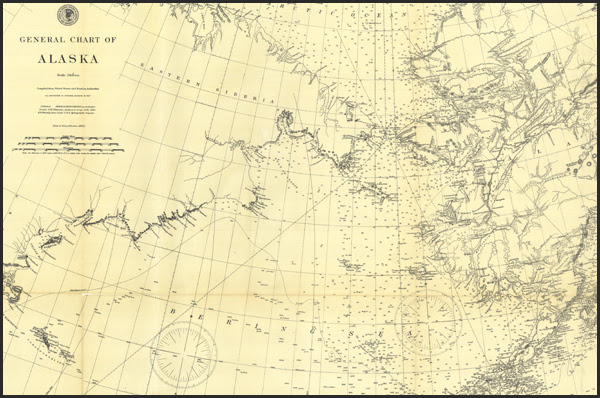 This 1898 General Chart of Alaska (partial image) was compiled from United States and Russian Authorities.

The U.S. Coast Survey, one of NOAA’s predecessor organizations, was instrumental in the U.S. decision to purchase Alaska.
In 1867, Coast Surveyor George Davidson led the party making a geographical reconnaissance of Alaska, to assess the Russians’ offer to sell “Russian America” to the United States.
He assured U.S. officials that Alaska would bring valuable resources to the nation, and we purchased Alaska for $7.2 million.

Coast Survey started its post-Davidson Alaska work in 1871, when Assistant William H. Dall led survey teams that took soundings, triangulated Alaskan coasts, and made astronomical observations. Dall’s teams provided the information for the first U.S. nautical charts of Alaskan harbors and coves. (See this chart of Sanborn Harbor, 1872, for example.)
Coast Survey leadership, in their annual reports to Congress, foresaw that Alaska’s resource development would severely challenge the woefully inadequate transportation infrastructure at the time, and more hydrographic field parties were dispatched to Alaskan waters through the rest of the 19th century.

The NOAA Ship Fairweather is named after Mt. Fairweather, located in Alaska's Glacier Bay National Park and Preserve along the US-Canada border. Mt. Fairweather was named by Captain Cook in 1778, presumably because of the good weather encountered at the time of his visit.

Fast forward to this century.
Modern ships navigating sea lanes in the Arctic should not be expected to trust ocean depth measurements reported by Captain Cook
A tanker, carrying millions of gallons of oil, should not be asked to rely on measurements made with lead lines, before modern technology allowed full bottom surveys.
Unfortunately, that’s exactly what navigators have to do, in too many cases.

Coast Survey has made it a priority to update the nautical charts needed by commercial shippers, passenger vessels, and fishing fleets transiting the Alaskan coastline in every greater numbers.
In June 2011, we issued the Arctic Nautical Charting Plan, a major effort to update Arctic nautical charts for the fairways, approaches, and ports along the Alaskan coast.
Before our cartographers can update the charts, however, they need up-to-date and accurate depth measurements. NOAA’s Office of Coast Survey is committed to getting that data.