Using the latest satellite tracking technology, conservationists from the Wildlife Conservation Society, the University of Exeter (UK), and the Government of Mexico have completed a ground-breaking study on a mysterious ocean giant: the manta ray.
The research team has produced the first published study on the use of satellite telemetry to track the open-ocean journeys of the world's largest ray, which can grow up to 25 feet in width.
Researchers say the manta ray -- listed as "Vulnerable" by the International Union for Conservation of Nature (IUCN) -- has become increasingly threatened by fishing and accidental capture and now needs more protection.

The study was published May 11 in the online journal PLoS One.

"Almost nothing is known about the movements and ecological needs of the manta ray, one of the ocean's largest and least-known species," said Dr. Rachel Graham, lead author on the study and director of WCS's Gulf and Caribbean Sharks and Rays Program.
"Our real-time data illuminate the previously unseen world of this mythic fish and will help to shape management and conservation strategies for this species."

The research team attached satellite transmitters to manta rays off the coast of Mexico's Yucatan Peninsula over a 13-day period.
The tracking devices were attached to the backs of six individuals -- four females, one male, and one juvenile.

"The satellite tag data revealed that some of the rays traveled more than 1,100 kilometers during the study period," said Dr. Matthew Witt of the University of Exeter's Environment and Sustainability Institute. "
The rays spent most of their time traversing coastal areas plentiful in zooplankton and fish eggs from spawning events."

Like baleen whales and whale sharks, manta rays are filter feeders that swim through clouds of plankton with mouths agape. 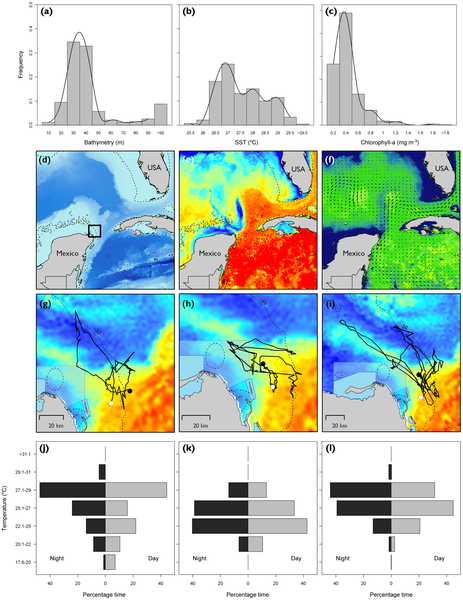 The research team also found that the manta rays spent nearly all their time within Mexico's territorial waters (within 200 miles of the coastline), but only 11.5 percent of the locations gathered from the tagged rays occurred within marine protected areas.
And the majority of ray locations were recorded in major shipping routes in the region; manta rays could be vulnerable to ship strikes.

"Studies such as this one are critical in developing effective management of manta rays, which appear to be declining worldwide," said Dr. Howard Rosenbaum, Director of WCS's Ocean Giant Program.

In spite of its malevolent, bat-like appearance, the manta ray -- sometimes referred to as the "devilfish" -- is harmless to humans and lacks the stinger of the better-known stingray.
The manta ray possesses the highest brain to body ratio of all sharks and rays and gives birth to live young, usually one or two "pups" every one or two years.
Manta rays are apparently declining in the Caribbean and in other tropical regions of the world's oceans, in part because they are captured for shark bait and a demand for gill rakers (small, finger-like structures that filter out the ray's minute zooplankton prey) in the traditional Chinese medicinal trade.
Posted by Peio at 1:10 AM