From The Telegraph by Annabel Fenwick Elliott

The 37-year-old British lawyer Lewis Pugh will dive into the Antarctic Ocean today clad in nothing but his Speedos, and front-crawl his way across a cove in what will be his most dangerous stunt yet.

Is the man mad?
No, he's on a noble mission.
Pugh - the only person to complete a long-distance swim in every ocean of the world - has been ploughing his way through freezing seas for 30 years now, all in a bid to protect and conserve them.

His one kilometre (0.6 mile) swim will take him across King Edward Cove in South Georgia, past the Grytviken Whaling Station and the gravesite where explorer Sir Ernest Shackleton was laid to rest. Emerging from the Arctic following a prior record-breaking swim

Pugh, a maritime lawyer, spoke to Telegraph Travel from Antarctica about how he prepares his body to withstand temperatures that would kill an ordinary human, why today's swim is particularly dangerous, and what all this has to with marine conservation.

"Without rehearsing, you'd drown pretty quickly in 0°C water," he explains.
"It's taken at least six months of very hard training to get to this point, and I only train in the sea - usually in temperatures of around 12°C."

Pugh has spent the last week acclimatising in progressively colder temperatures, much like a mountaineer tackles high altitudes.
Interestingly, scientists have found that his body temperature rises significantly just before he dives in, up to 38.2°C in the past.
South African sports medicine professor Tim Noakes noted this first, and coined it "anticipatory thermogenesis" - a Pavlovian response due to his years of cold water swimming
"I call it fear," jokes Pugh.
"But we aren't certain of the true reason." "I always dive, and never dip my toe in first," Pugh says.
"As soon as I hit the water, my capillaries constrict to defend the warmth in my body and the blood rushes to my core to protect my vital organs."

From here, it's an uphill battle against his body's natural panic response.
"First, I need to calm down and control my breathing," he says.
The pain is excruciating.
I’ll think of dozens of reasons to get out, so I try to focus on just one thing to keep on going."

UN Environment Patron of the Oceans and endurance swimmer Lewis Pugh has traveled to Antarctica to raise awareness about the crucial need to protect its ecosystems.
"Ordinary won't change the World".

Pugh can swim for around 20 minutes before his system packs up.
"After that, my arm stroke slows considerably," he explains.
"As my core temperature drops, my hands can no longer grip the water, my coordination starts going and I turn bright red as the blood rushes to the surface of my skin, radiating heat."

The race to warm up
Credit : Kelvin Trautman

With this particular swim, Pugh will be in the domain of some formidable ocean predators; elephant seals, Antarctic fur seals, leopard seals and killer whales.
"None of these animals will have ever seen a human swimming," Pugh says.
"The waters are full of them, and the last thing I want is for one of them to take a bite out of me."
As soon as he's out of the water, Pugh's team rushes him to a hot shower where it takes at least 50 minutes for his core temperature to normalise. 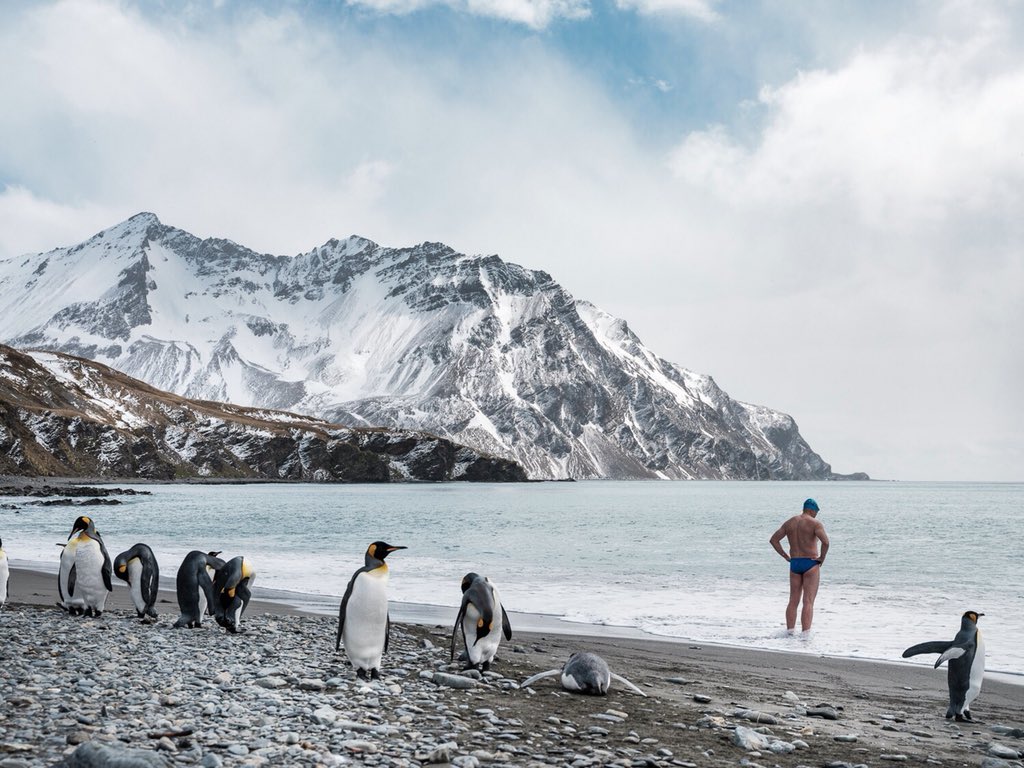 Surely it would make more sense to execute these swims in protective gear, a wetsuit at the very least. But that, apparently, would be too easy.
"I ask world leaders to do everything they can to protect our oceans," Pugh remarks.
"Sometimes the steps they need to take are difficult and unpopular. If I’m asking them to be courageous, I must also be. Swimming in a wetsuit would not send the right message."

All to keep the fishing boats away

As fish stocks plummet around the world, industrial fishing fleets are seeking new seas to exploit, according to Pugh, who warns: "It's only a matter of time before they set their sights on the South Sandwich Islands. This pristine ocean wilderness is under imminent threat." He's the only human to have completed a long-distance swim in all of the world's seven oceans
Credit : Kelvin Trautman

He hopes his latest swim will draw attention to his cause.
"I am urging the UK government to fully protect this unique ecosystem, starting with the creation of a 'No Take Zone' around the South Sandwich Islands.
If we don’t protect them now, we risk losing them forever."

Last year Pugh played a pivotal role in creating the largest protected area in the world, in the Ross Sea off Antarctica.
Between his media-grabbing swims, he shuttled between the US and Russia to help negotiate the final agreement. 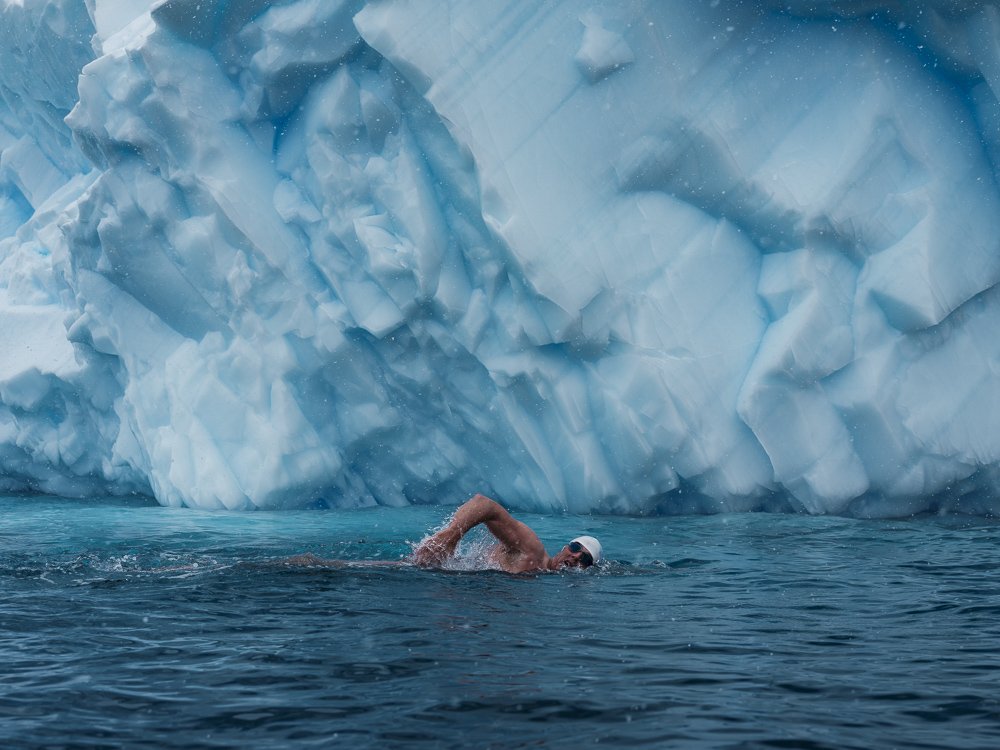 In 2007, he was the first person to undertake a long-distance swim across the North Pole, which he did to highlight the melting of the Arctic sea ice.
And in 2013 the United Nations appointed him as the first "UN Patron of the Oceans".

Lewis is pushing for this Antarctic region to be protected

Why is this slice of ocean so important?

South Georgia and the neighbouring South Sandwich Islands - all British Overseas Territories - are considered to be among the world's most important spots in terms of biodiversity.

They’re home to an astonishing array of marine wildlife; 95 per cent of the total Antarctic fur seal population, more than 50 per cent of southern elephant seals, and nearly 20 per cent of the world's penguins.
They are also a haven for sea birds and whale species, among them the endangered blue whale.

Climate change has been cited as a major threat to this region, as well as overfishing - all issues taking the front seat in BBC’s ground-breaking Blue Planet II series.
Britain has taken a global lead in marine conservation with its "Blue Belt" policy, planning to conserve nearly four million square kilometres of natural ocean habitat by 2020.

Pugh wants to make sure the South Sandwich Islands falls within it, and he’s got the Speedos to prove it.