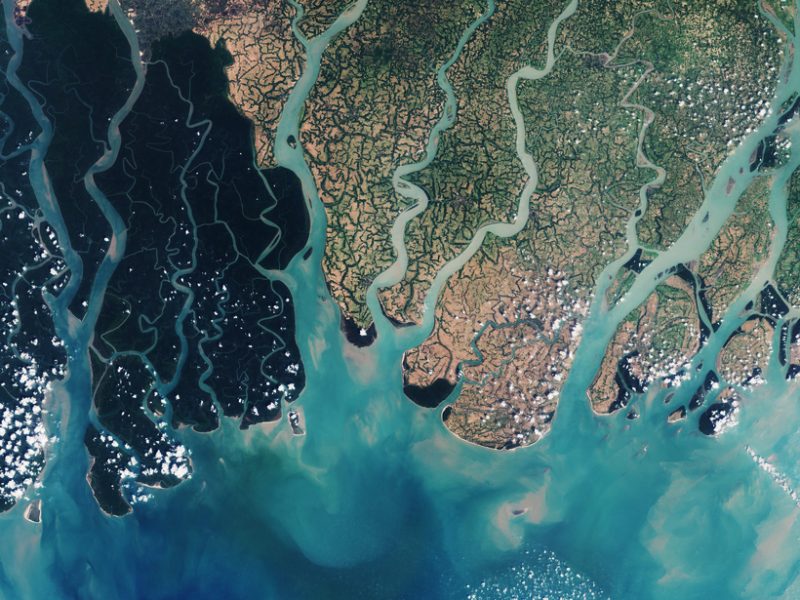 Sentinel-2A natural-color satellite image of the Sundarbans area in the Ganges-Brahmaputra Delta, captured on 18 March 2016.
The erosional forces from the sea and wind along the coast continuously change the landscape, together with the huge amount of silt and other sediments deposited in the countless estuaries, visible in the water.
Satellite images are a key component of coastal monitoring efforts, especially in rapidly changing areas such as this.
Credit: European Space Agency

The world’s coastal zones, currently home to a large fraction of the world’s population, are under serious threat from coastal erosion, cyclones, storms, and saltwater incursion into estuaries and coastal aquifers.
In the future, scientists expect these hazards to increase because of the combined effects of sea level rise, climate change, human activities, and population increase.

How coastal environments respond to natural and anthropogenic factors depends on the characteristics of the forcing agents, as well as on the properties of the coastal systems that remain poorly known and mostly unsurveyed on a global scale.
To better understand changes affecting coastal zones and to provide useful information to decision-makers, we need to collect and analyze various types of observations with global coverage.

In this context, observations from space represent an important complement to existing in situ observing systems (e.g., regional tide gauge networks).
Here we highlight the benefit of systematic coastal monitoring from space.
Such data combined with in situ observations and databases will be extremely useful to constrain models of coastal change. 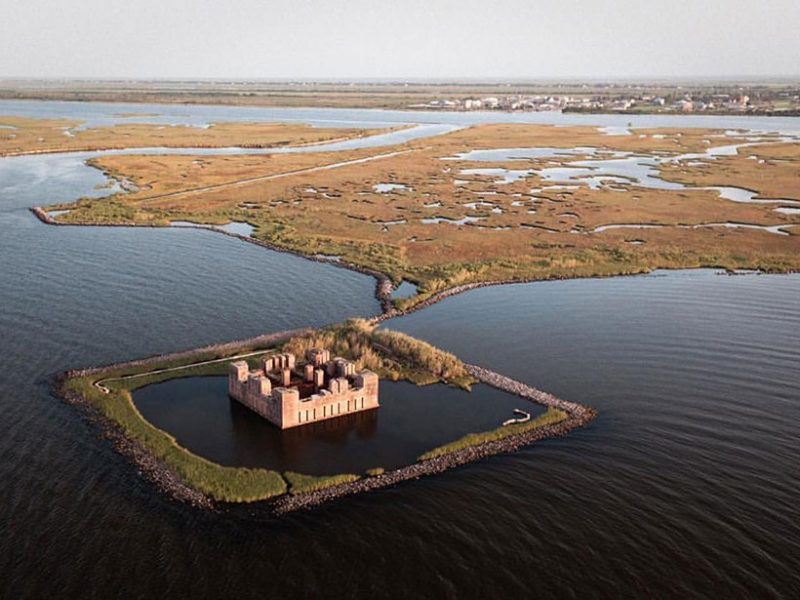 The ruins of Fort Beauregard (also known as Fort Proctor) are partly submerged in Lake Borgne, east of New Orleans, La.
Many coastal areas are sinking even faster than sea level is rising.
Credit: Frank McMains

Regional sea level change, winds, waves, currents, extreme events, vertical ground motions, river runoff, sediment supply, land use change and urbanization, policies, and regulations all act as forcing agents on coastal zones.
Satellites have a tremendous potential to observe and characterize these forcing agents, but often, their instruments are not adapted to the special conditions of coastal zones.

For example, coastal residents are particularly concerned about rising sea levels in response to anthropogenic global warming.
High-precision satellite altimetry has considerably improved our understanding of sea level variations at global and regional scales, but that is not the case for coastal areas.
In terms of impacts, what counts at the coast is the sum of global mean rise, superimposed regional variability, small-scale ocean processes, and local vertical land motions.

Satellite altimetry, optimized for the open ocean, performs poorly within 10 kilometers of the coast because land masses contaminate the data.
Recent progress in reprocessing radar waveforms in coastal areas and use of new altimetry techniques (e.g., Ka band altimetry and synthetic aperture radar (SAR) mode) have enabled the satellite community to develop new coastal altimetry data sets.
However, coverage from these products remains uneven in space and time, and efforts are needed to construct a consistent gridded coastal altimetry database with global coverage.


Satellite technology supports the observation and analysis of marine bio-geo-chemical processes at global and regional scale.
This video, produced in 2004, illustrates the activities performed at the Institute for Environment and Sustainability of the Joint Research Centre on the operational use of Earth Observation for marine water quality and climate change investigations.
The MERIS European ocean color sensor was successfully operated onboard the ENVISAT platform from March 1, 2002 till April 8, 2012.
Today European satellite ocean color sensor is called OLCI and operates onboard the Sentinel-3 satellite since mid-2014.

Keeping an Eye on Forcing Agents

To be effective, satellite data must be coupled with in situ measurements; the strengths and limitations of each data source complement each other.
For example, extreme sea levels that result from a variety of oceanic, atmospheric, and terrestrial processes acting on a broad range of timescales are highly correlated with the global mean sea level rise: The higher the global mean rise is, the higher the water elevation is during extreme events [Menéndez and Woodworth, 2010].
Data banks of tide gauge records are valuable sources of information on mean and extreme sea levels, supplementing satellite data.
Version 2 of the Global Extreme Sea Level Analysis (GESLA-2) is the most complete extreme sea level data set assembled to date [Woodworth et al., 2017].
The satellite community has made it a priority to ensure that this activity is maintained and extended in the future.
Although wave models are available at global, regional, and local scales, wave and wind measurements in the coastal zones are still limited.
Altimetry and SAR images can provide such information; however, we need to undertake investigations using existing and upcoming altimeter data sets (in particular using the new SAR mode).
A multisensor approach (altimetry, SAR, and scatterometry) to measuring winds and waves in selected coastal regions could provide much-needed constraints on coastal hydrodynamic and flooding models.


The global mean level of the oceans is one of the most important indicators of climate change.
It incorporates the reactions from severaldifferent components of the climate system.
Precise monitoring of changes in the mean level of the oceans, particularly through the use of altimetry satellites, is vitally important, for understanding not just the climate but also the socioeconomic consequences of any rise in sea level.
credit CLS

Other forcing agents acting on coastal zones include river runoff, sediment supply, and changes in land use.
Over previous decades, human activities have strongly modified river runoff and sediment delivery to the coastal zone, with great influence on coastal erosion.
Accurate estimates of such quantities are thus crucial.
Satellite altimetry, particularly in ungauged or poorly gauged hydrological basins, now routinely measures the water level on land from which river discharge can be derived.
We can also indirectly estimate river discharge for medium-sized basins (<10,000 square kilometers) from satellite images in the visible and near-infrared spectrum.

The Surface Water and Ocean Topography (SWOT) satellite mission planned for launch in 2021 will improve the characterization of global runoff processes with a 50-meter resolution threshold. Although the capability of remote sensing systems to retrieve land use change is now well established, what’s still missing is an easy-to-use database collecting relevant information with global coverage and long records. 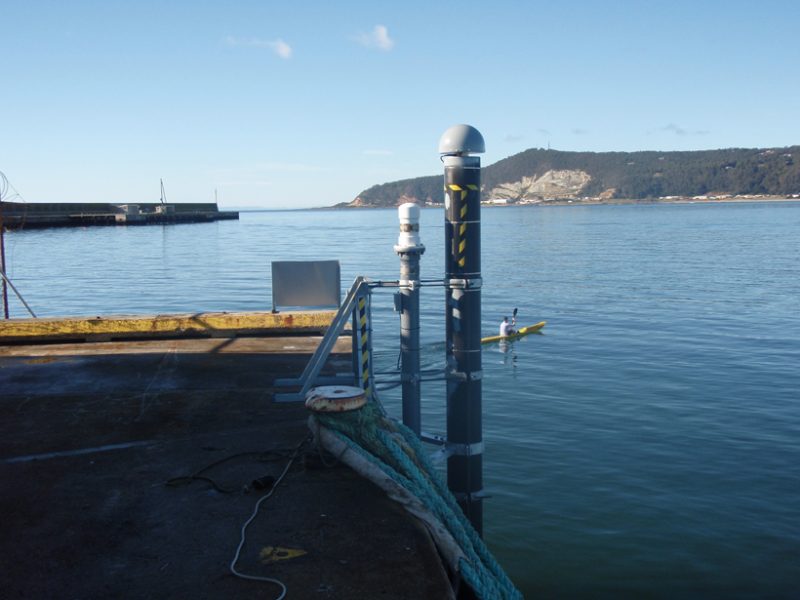 An acoustic tide gauge monitors the harbor at Burnie on the northern coast of Tasmania, Australia. To its right, a special pillar has a GNSS receiver on top.
Credit: © Commonwealth of Australia (Geoscience Australia) 2016.

Net subsidence and the resilience of many of the world’s significant deltas (home to millions of people, infrastructure, and significant food supply) are the summed response to sediment supply, land subsidence in response to water and hydrocarbon extraction, and land use change.
Techniques like Global Navigation Satellite Systems (GNSS) and interferometric synthetic aperture radar (InSAR) provide invaluable information on land motions at local scales [Allison et al., 2016], but many coastal zones are not equipped with GNSS receivers, and systematic monitoring of land motions by InSAR is still missing in many vulnerable areas such as the low-lying coasts of Pacific islands and subsiding cities of southeastern Asia.
Thus, we need to equip the most vulnerable coastal sites with precise positioning equipment to measure long-term vertical land motions.

Keeping an Eye on Coastal Evolution

Sediment supply and transport processes drive changes occurring along shorelines and in nearshore coastal zones as well as in river estuaries.
These changes are still poorly quantified in most coastal areas, and coastal observatories developed to track them using in situ and airborne data remain limited.

Here again, space data offer an opportunity to gather additional observations with a global perspective.
Currently, most space-based initiatives are based on a visual processing of high-resolution optical data (0.5- to 1-meter resolution) from imaging satellites.
Errors in georectification (aligning satellite images with maps) and on shoreline indicators lead to an effective precision of 1–5 meters in the shoreline position.

However, because we currently lack automatic techniques for processing these data, no global satellite-based database of shoreline position changes exists.
Automatic analysis of optical images, the use of high-resolution synthetic aperture radar images in cloudy tropical areas, and accurate estimates of shoreline indicators thus represent high-priority objectives for science fields related to coasts.

Global to regional data sets based on ocean color sensors allow us to quantify the dynamics of suspended sediment, which has been related to shoreline changes with some success close to dynamic estuaries such as the Amazon and Mekong estuaries [e.g., Loisel et al., 2014].
However, we need further methodological developments that allow repeated data acquisitions in highly dynamic areas (e.g., estuaries, sandy inlets, and sandy beaches) to improve our understanding of coastal evolution in other types of coastal environments.
For example, suspended sediments are visible in the above satellite image of the Ganges-Brahmaputra Delta.

High-resolution digital elevation models and coastal bathymetric data are other examples of critical data sets needed for a number of applications in coastal zones, including accurate modeling of flooding during storm surges and quantification of coastal morphological changes due to sedimentary processes or human interventions.
A high-precision (~20 centimeters) and high-resolution (~1 to 10 meters) database of continuous marine-land topography and bathymetry would be particularly useful to represent detailed submersion patterns while being consistent with uncertainties of extreme sea level values.

Lidar techniques have enabled important progress, but they still require postprocessing to remove features like trees or vehicles from the raw data.
Repeated bathymetric surveys with wide coverage would be useful to understand nearshore coastal processes.
We expect progress from new techniques such as satellite and drone-acquired high-resolution imagery.
Nearshore bathymetry, shoreline changes, and high-resolution topography are definitely observational priorities, especially along densely populated coastlines.

Putting It All Together

If we are to make progress on understanding the magnitude and causes of changes in the coastal zone on a global basis, we must make considerable investments in space-based as well as in situ observation systems.
Modeling and synthesis activities must accompany the measurements, so that the research can provide insight into the future change of coastal areas.

Finally, access to global coastal data sets is still too limited.
International efforts such as the World Climate Research Programme should consider establishing a data repository gathering all needed coastal observations, whether collected locally or through satellite remote sensing.
Posted by geogarage at 1:38 AM