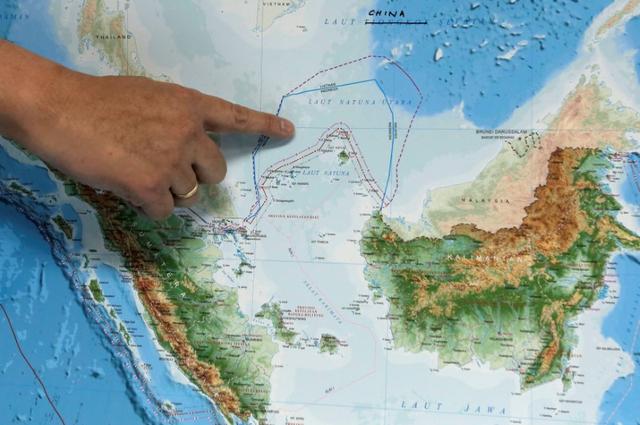 Indonesia's Deputy Minister for Maritime Affairs Arif Havas Oegroseno points at the location of North Natuna Sea on a new map of Indonesia during talks with reporters in Jakarta, Indonesia, July 14, 2017.

From Reuters by Tom Allard and Bernadette Christina Munthe

Indonesia renamed the northern reaches of its exclusive economic zone in the South China Sea as the North Natuna Sea on Friday, the latest act of resistance by Southeast Asian nations to China's territorial ambitions in the maritime region.

Seen by analysts as an assertion of Indonesian sovereignty, part of the renamed sea is claimed by China under its contentious maritime boundary, known as the 'nine-dash line', that encompasses most of the resource-rich sea. 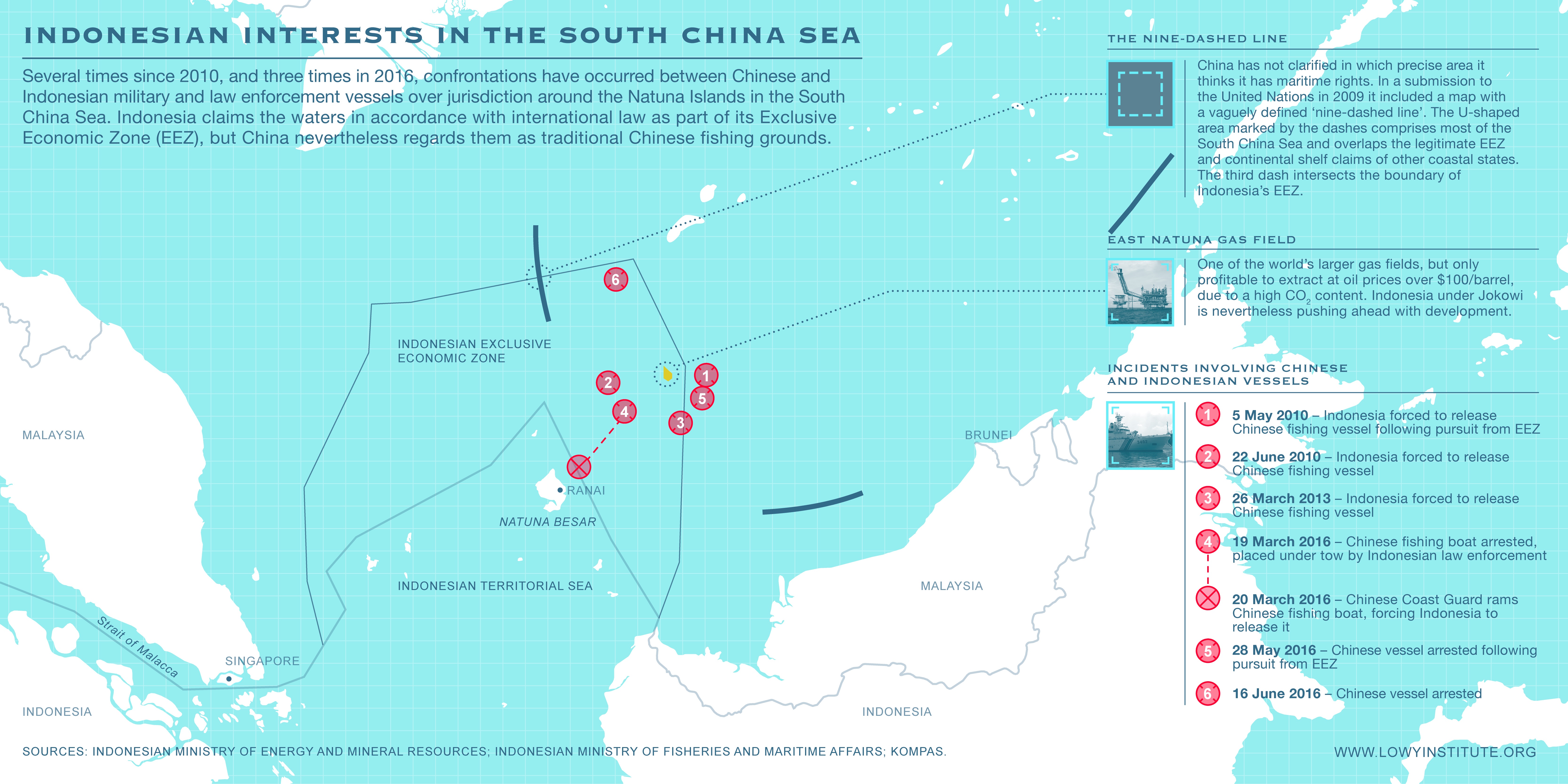 Several Southeast Asian states dispute China's territorial claims and are competing with China to exploit the South China Sea's abundant hydrocarbon and fishing resources.
China has raised the ante by deploying military assets on artificial islands constructed on shoals and reefs in disputed parts of the sea.
Indonesia insists it's a non-claimant state in the South China Sea dispute but has clashed with China over fishing rights around the Natuna Islands, detaining Chinese fishermen and expanding its military presence in the area over the past 18 months. 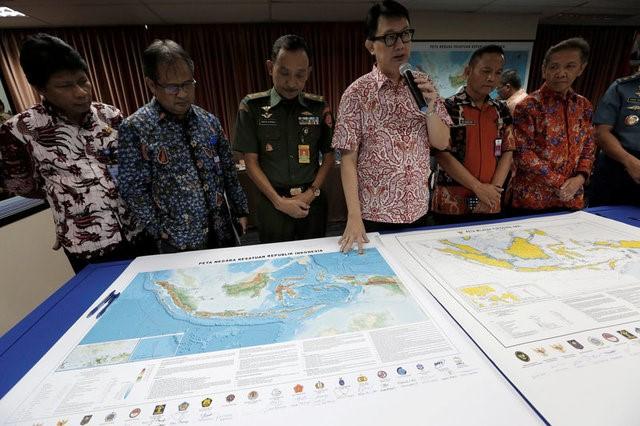 Indonesian Deputy Minister for Maritime Affairs Arif Havas Oegroseno (C) stands in front of a new map of Indonesia during talks with reporters in Jakarta, Indonesia, July 14, 2017.
Unveiling the new official map, the deputy of maritime sovereignty at the Ministry of Maritime Affairs, Arif Havas Oegroseno, noted the northern side of its exclusive economic zone was the site of oil and gas activity.
"We want to update the naming of the sea [and] we gave a new name in line with the usual practice: the North Natuna Sea," he told reporters. Area map (Kedai Pena)
The new name is in line with oil and gas management activities in the area.
Currently oil and gas exploration and exploitation activities at the area are using the name of North Natuna, South Natuna and North East Natuna in project naming.

According to the 1953 edition of the map of Indonesia, the South China Sea is very close to Java sea territory.
As considered to be old document, the government is updating the name for a number of areas in Indonesia.

Havas said that the Natuna Sea name is used in 2002, although oil and gas activities in the area have used the name of North Natuna in the 70s.
Havas added that Indonesia has the authority for naming the areas in its territory. International recording will be processed by the International Hydrographic Organization (IHO).
In Beijing, Chinese Foreign Ministry spokesman Geng Shuang said he didn't know anything about the details of the issue, but said the name South China Sea had broad international recognition and clear geographic limits.
"Certain countries' so-called renaming is totally meaningless," he told a daily news briefing.
"We hope the relevant country can meet China halfway and properly maintain the present good situation in the South China Sea region, which has not come easily." 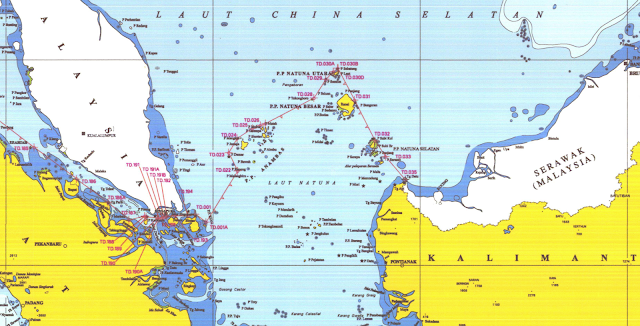 
I Made Andi Arsana, an expert on the Law of the Sea from Indonesia's Universitas Gadjah Mada, said the renaming carried no legal force but was a political and diplomatic statement.
"It will be seen as a big step by Indonesia to state its sovereignty," he told Reuters.
"It will send a clear message, both to the Indonesian people and diplomatically speaking."
Euan Graham, director of the international security program at the Lowy Institute, said Indonesia's action followed renewed resistance to Chinese territorial claims by other Southeast Asian states.
"This will be noticed in Beijing," he said. 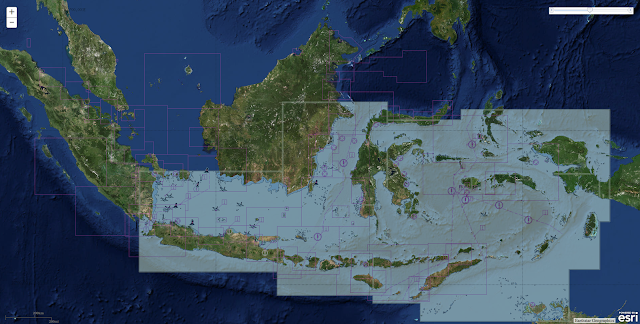 Indonesia ENCs in the GeoGarage platform 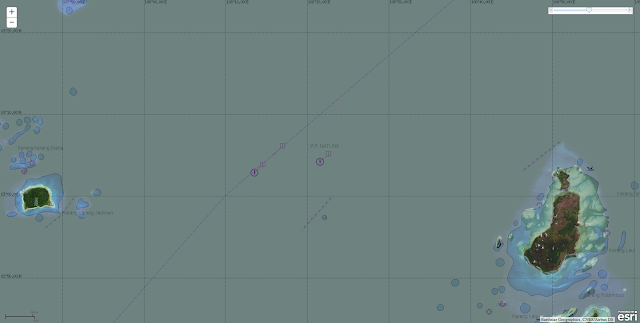 Natuna in the GeoGarage platform


Last week, Vietnam extended an Indian oil concession off its coast while a joint venture led by state-owned PetroVietnam commenced drilling further south.
China has a territorial claim in both areas.
Meanwhile, the director of the Philippines Energy Resource Development Bureau, Ismael Ocampo, said on Wednesday that the country could lift a suspension on oil and gas drilling on the Reed Bank by December.
The underwater mountain, lying 85 nautical miles off the Philippines coast, is also claimed by China.
Exploration activity was suspended in late 2014 as the Philippines sought an international ruling on China's territorial claim. 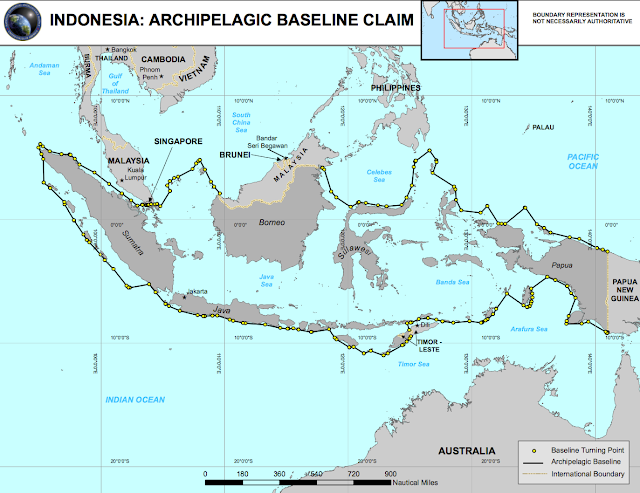 The Philippines won the case in the Permanent Court of Arbitration in the Hague one year ago.
China refused to recognize the decision.
Philippines President Rodrigo Duterte, who took office on June 30 last year, expressed reluctance about enforcing the decision at the time, as he sought deeper diplomatic and economic ties with China.
However, the Philippines lately has become more assertive about its sovereignty.
More than two dozen oil, gas and coal blocks, including additional areas in disputed waters, may be offered during the December bidding, Ocampo said.