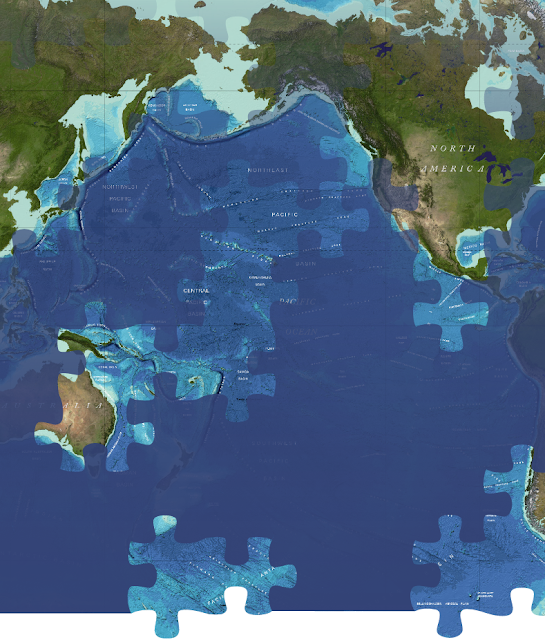 From Smithsonian by Kyle Frischkorn

Earth has no shortage of stunning landforms: Mt. Everest rises majestically above the clouds; the Grand Canyon rents deep into desert rock layers; the mountains that make up the Ethiopian Highlands, aka the Roof of Africa, tower above the rest of the continent.
But all of these natural icons pale in comparison to the dramatic formations that lie beneath the ocean.
Next to the deep sea's mountains and gorges, the Grand Canyon is a mere dimple, Mount Everest a bunny slope and the Highlands an anthill on the horn of Africa.
The shape of the ocean floor helps determine weather patterns, when and where tsunamis will strike and management of fisheries that feed millions.
And yet we’ve barely begun to understand it.
To borrow an analogy from oceanographer Robert Ballard, best known for re-discovering the Titanic: With only 5 percent of the ocean floor mapped, our knowledge of what’s beneath is about as detailed as a set dinner table with a wet blanket thrown over it.
You can see the outlines, but how do you tell the candelabra from the turkey? 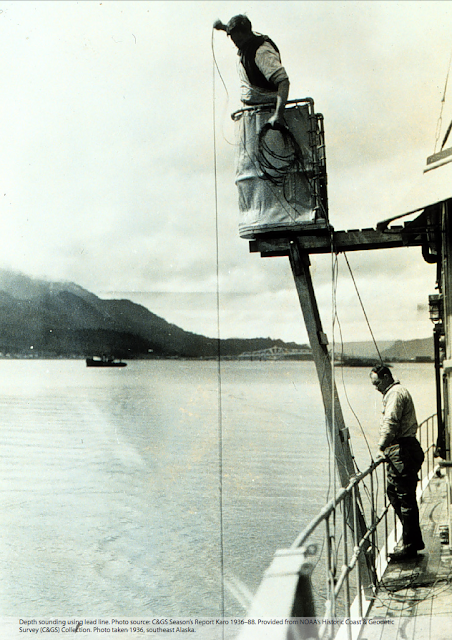 Fortunately, we’re about to whip the blanket off and reveal this aquatic meal in exquisite detail.
In June, an international team of oceanographers launched the first effort to create a comprehensive map of all the world’s oceans.
To map some 140 million square miles of sea floor, the Seabed 2030 project is currently recruiting around 100 ships that will circumscribe the globe for 13 years.
The team, united under the non-profit group General Bathymetric Chart of the Oceans (GEBCO), recently announced it had received $18.5 million dollars from the Nippon Foundation for its efforts.

Many oceanographers hail the project as an illumination of a geological and biological world that is long overdue.
It could also be potentially lifesaving: Even today, the lack of a detailed map can be deadly, as was the case when the USS San Francisco crashed into an uncharted mountain in 2005.
“People have been excited about going to different planets,” says Martin Jakobsson, professor of marine geology and geophysics at Stockholm University, but “we haven’t been able to bring the attention to our own Earth in the same way as Mars.
It hasn’t been easy to rally the whole world behind us.” 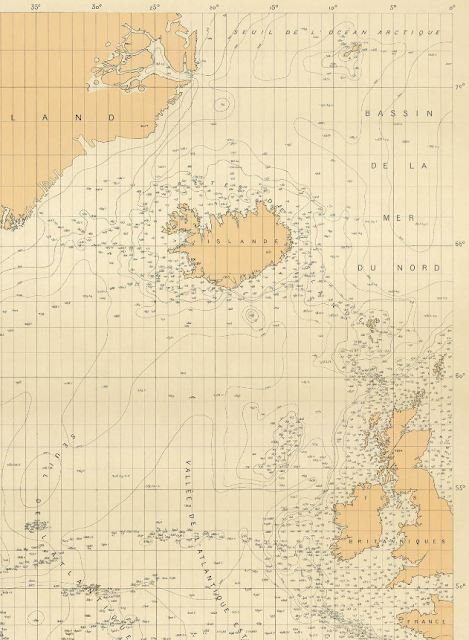 Yet at the same time, some ecologists fear that such a map will also aid mining industries who seek profit in the previously unattainable depths of the Earth.

It’s a common sentiment among Earth scientists—often a lament—that we know more about other planets in the solar system than we do our own.
Indeed, astronomers have a more complete topographical understanding of the moon, Mars, ex-planet Pluto and the dwarf planet Ceres than we do of the seabed.
This is shocking, because the topography of the seafloor plays such a huge role in keeping the planet habitable—a role we need to fully understand in order to predict what the future of our climate holds.

The reason we have no comprehensive map is dumbfoundingly simple, considering that we’ve traversed and charted our solar system: “It’s not so easy to map the ocean, because the water is in the way,” says Jakobsson.
The ocean is big, deep and impermeable to the laser altimeter that made mapping our less watery neighbor planets possible.
To complete a map of Earth’s ocean floor, you’ve got to take to the high seas by boat. 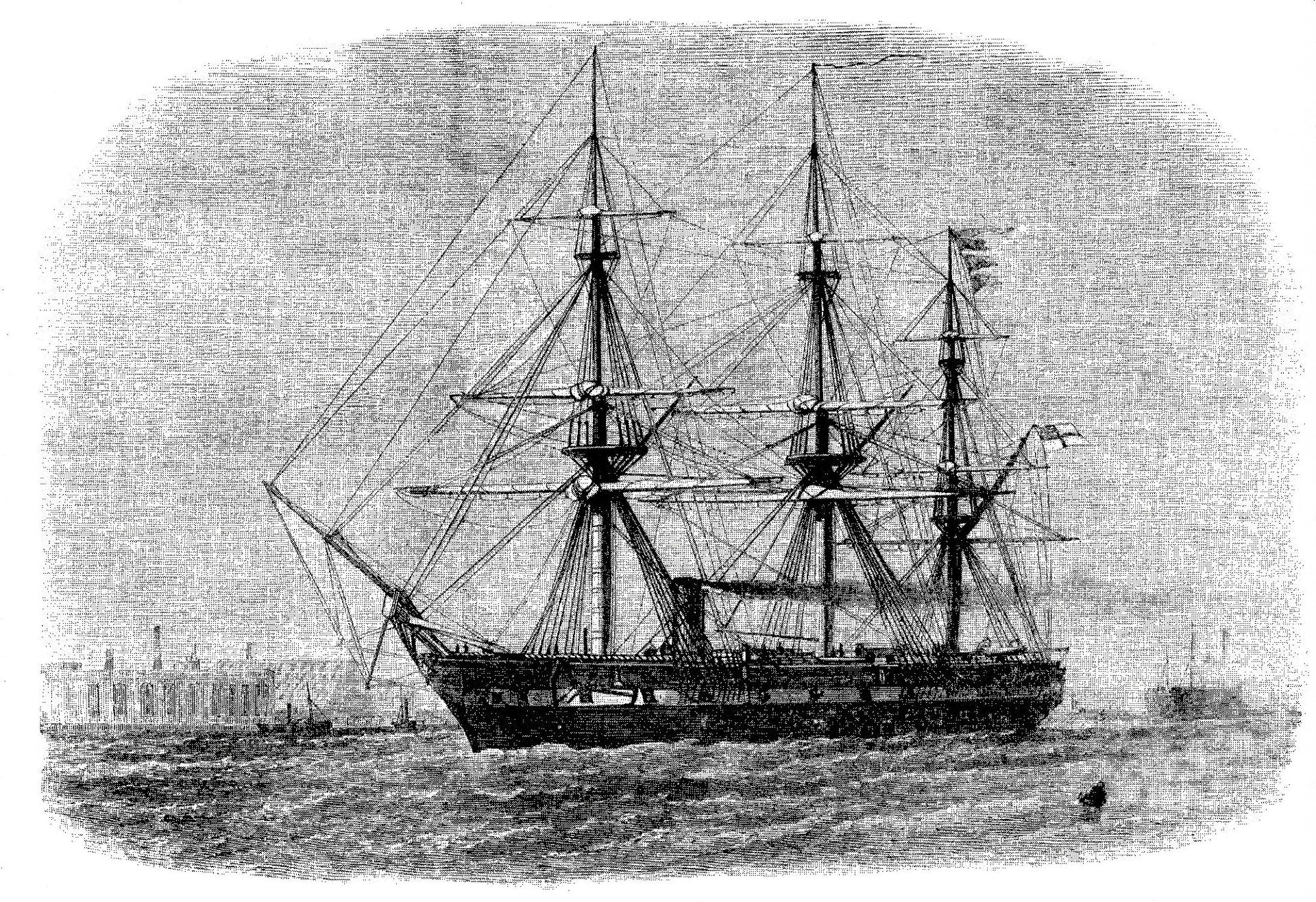 We've come a long way in ocean exploration since the days of the HMS Challenger, launched in 1858. (The Report of the Scientific Results of the Exploring Voyage of HMS Challenger during the years 1873–1876)

The first oceanographic researchers—like those onboard the H.M.S.Challenger expedition—built sea floor maps by “sounding” with weighted lines lowered to reach the sediment below.
Compiled one data point at a time, this painstaking yet critical undertaking aided navigation and prevented ships from running aground.
At the same time, it helped satisfy simple scientific curiosity about the depths of the ocean. 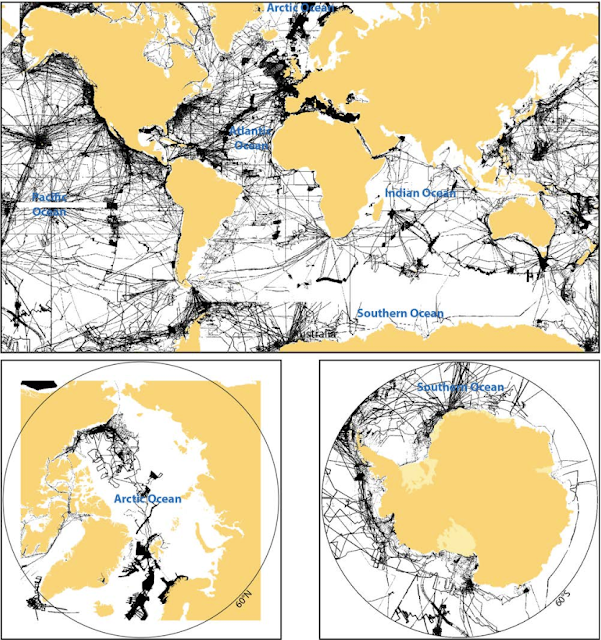 Thankfully the technology used today has advanced beyond dangling plumb lines over the side of the ship.
Modern ships like those that will be employed by Seabed 2030 are outfitted with multibeam bathymetry systems.
These sensors ping large swaths of ocean floor with sound waves that bounce back, and are analyzed by computers on deck.
One ship can now provide thousands of square kilometers' worth of high-resolution maps during an expedition.
Still, it would take a lone ship approximately 200 years to chart all 139.7 million square miles of ocean. 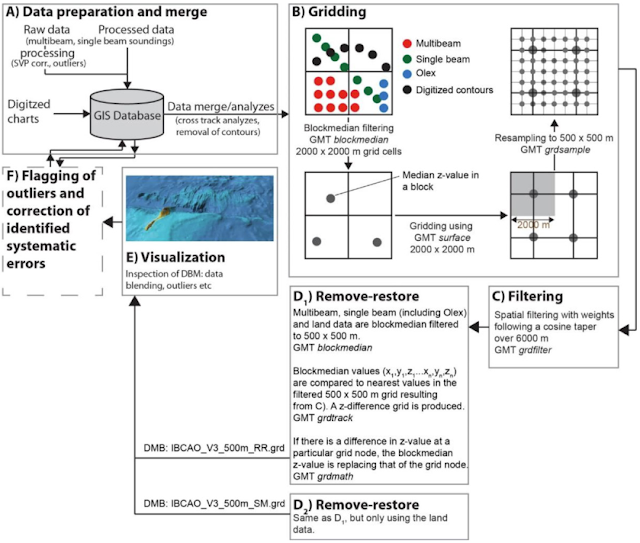 The technical procedure applied in the IBCAO project, from when data have been contributed by the involved parties  through their Editorial Board representatives to the final production of gridded digital bathymetric model (here referred to as a DBM)  representing the seafloor.
The figure is from Jakobsson et al. 2012.

That's where Seabed 2030 comes in.
It will facilitate the collection of multibeam measurements on a coalition of ships charting previously unexplored territory, while also serving as a repository of existing map data.
“When you look at a world map it seems like we’ve got it all figured out,” Jakobsson says.
But those maps are just rough, artistic estimations of what the seafloor looks like.
“I foresee a lot of new discoveries,” he says of the mapping project.
After all, “our major discoveries have been because of mapping”—and there’s a lot more to be found.

The discoveries lying in wait beneath the waves aren’t only of interest to oceanographers.
Hidden in the subsea mountains and valleys are vast pools of resources like precious metals, rare earth elements and even diamonds.
“It’s like the old Klondike [Gold Rush], but the streams lead to the ocean,” says Steven Scott, professor of geology at the University of Toronto and consultant to the marine mining industry.
“There’s mining for diamonds off of Southern Africa, tin deposits off of Indonesia, gold off Alaska.” 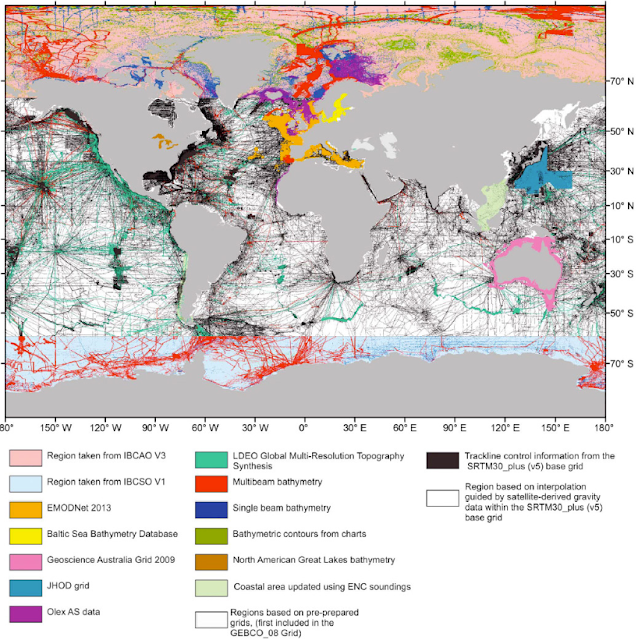 GEBCO 2014 bathymetric data coverage.
At this scale the World Ocean appears much better covered with ship soundings than it is.
The fact is that the available bathymetric data used to compile GEBCO_2014 provided depth control points to only 18% of all the 30 arc-second (926 m at the equator) grid cells.
Figure is from Weatherall et al. (2015)

Currently, seafloor mining only takes place in these relatively shallow, near-shore locations, rather than in deep international waters.
That’s partly because prospectors can’t target mining operations without accurate maps of most of the sea floor, but also because international laws make it challenging to exploit resources in international waters.

“Seabed minerals and areas beyond national jurisdiction are part of the Common Heritage of Mankind,” says Kristina Gjerde, the high seas policy advisor for the International Union for Conservation of Nature.
In 1982 the United Nations amended the Convention on the Law of the Sea that laid down rules to govern the use of the ocean’s resources.
The law states that deep-sea life must be protected, and that revenue made from mining in the deep sea must be shared with the international community.

“We know so little about potential environmental impacts” of ocean mining, Gjerde says.
“Some are starting to question if we know enough to authorize mining to proceed.
We really need a better understanding of the deep sea before we start to do any irremediable harm.” Gjerde is co-author on a recent editorial in the journal Nature Geoscience arguing that while deep-sea mining might fuel economic development, the industry should increase its efforts to protect marine habitats.

This, say Gjerde and other concerned biologists, is the catch 22 of generating a comprehensive topology of the seafloor: It will undoubtedly help scientists better understand the rich and crucial geology of our planet.
But it could also serve as a treasure map for the mining industry.

Scott agrees that habitats around mining operations will be impacted.
Still, based on his experience, he says, “I think [the effects] will be less substantial” than mining on land, which is known to have catastrophic environmental consequences ranging from acid mine drainage that pollutes water to toxic clouds of dust.
“None of those things will be a problem in the ocean,” Scott says. 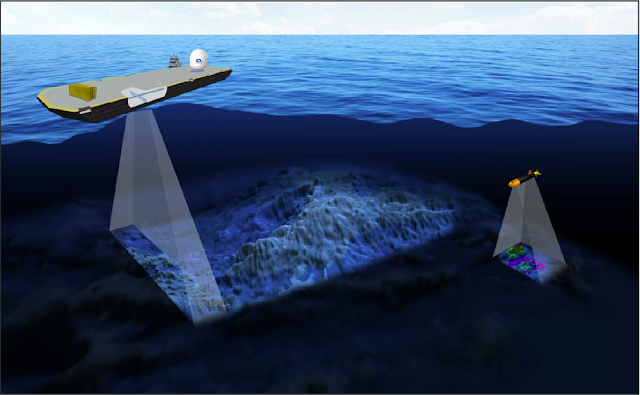 The concept of an unmanned mapping barge, monitored by satellite communication and equipped with an ultra-narrow beam deep-water multibeam (left).
Such a barge would be able to systematically map the deepest sections of the open ocean from the surface at even higher resolution than 100 x100 m.
The sub-meter level of detail sometimes needed to investigate small scale processes at the seabed is today only possible to achieve in the deep ocean using AUVs equipped with high-resolution high frequency multibeam systems.
These AUVs would serve as excellent complements to the mapping barge, but their present endurance, cost, and swath coverage does not make them the tool for mapping the entire World Ocean floor.

There won’t be any holes because the targeted resources are near the surface of the seabed, he points out.
Dust isn’t a factor in a liquid medium, and alkaline seawater would quickly neutralize any acidic byproducts.
Proponents of ocean prospecting also point out that we simply need the resources that are out there.

“Mines on land are soon going to run out,” Scott says.
“Every electronic device in the world has rare earth [metals] in it ... we need raw resources.”
And what happens when we eventually run out of things to mine from the ocean? Scott says, “We start mining asteroids, or Mars.”
Well, at least we’ve already got the maps for those.

But back to the sea floor.
As Ballard said last year at the Forum for Future Ocean Floor Mapping: “They tell children that their generation is going to explore more of Earth than all previous generations combined.
As soon as we finish that map, the explorers are right behind.”
The question of just what kind of explorers those will be—those searching for knowledge or riches, seeking to preserve or extract—remains to be seen.