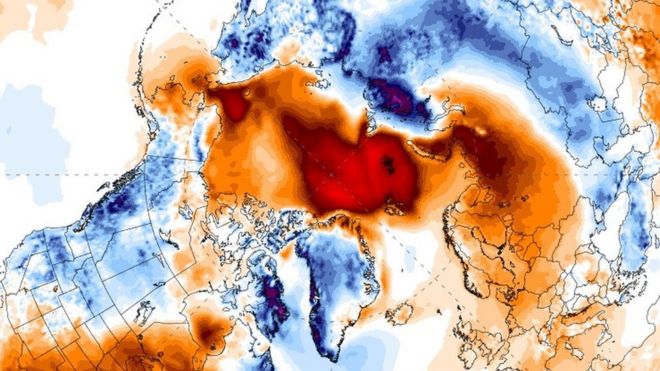 
Temperatures at the North Pole could be up to 20 degrees higher than average this Christmas Eve, in what scientists say is a record-breaking heatwave.
Climate scientists say these unseasonably warm weather patterns in the Arctic region are directly linked to man-made climate change.
Temperatures throughout November and December were 5C higher than average.
It follows a summer during which Arctic sea ice reached the second-lowest extent ever recorded by satellites. 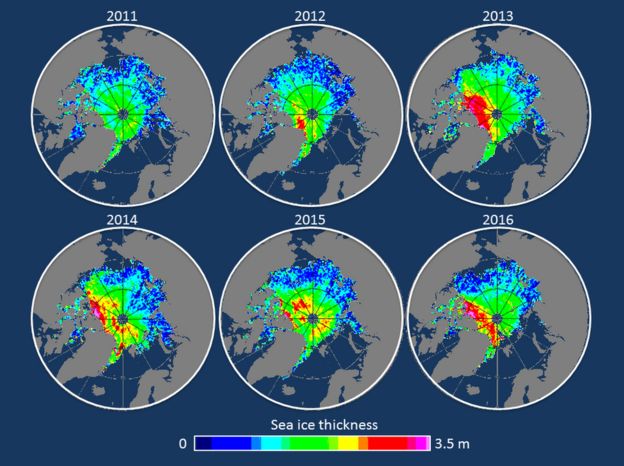 Dr Friederike Otto, a senior researcher at Oxford's Environmental Change Institute told BBC News that in pre-industrial times "a heatwave like this would have been extremely rare - we would expect it to occur about every 1,000 years".
Dr Otto added that scientists are "very confident" that the weather patterns were linked to anthropogenic climate change.
"We have used several different climate modelling approaches and observations," she told BBC News.
"And in all our methods, we find the same thing; we cannot model a heatwave like this without the anthropogenic signal."
Temperatures are forecast to peak on Christmas Eve around the North Pole - at near-freezing.
The warm air from the North Atlantic is forecast to flow all the way to the North Pole via Spitsbergen, giving rise to clouds that prevent heat from escaping.
And, as Dr Otto explained to BBC News, the reduction in sea ice is contributing to this "feedback loop".
"If the globe is warming, then the sea ice and ice on land [shrinks] then the darker water and land is exposed," she said.
"Then the sunlight is absorbed rather than reflected as it would be by the ice."
Forecasting models show that there is about a 2% chance of a heatwave event occurring every year.
"But if temperatures continue to increase further as they are now," said Dr Otto, "we would expect a heatwave like this to occur every other year and that will be a huge stress on the ecosystem."
Dr Thorsten Markus, chief of NASA's Cryospheric Sciences Laboratory, said the heatwave was "very, very unusual".
"The eerie thing is that we saw something quite similar (temperatures at the North Pole of about 0C in December) almost exactly a year ago," he told BBC News.
The freeze and thaw conditions are already making it difficult for reindeer to find food - as the moss they feed on is covered by hard ice, rather than soft, penetrable snow.
Asked if the conditions on Christmas Eve were likely to affect Santa's all-important journey, Dr Markus said he was confident that his sled would cope with the conditions.
He added: "Santa is most likely overdressed though. Maybe in the future we'll see him in a light jacket or plastic mac."