Man on the moon : Thomas Coville slashes solo yachting round the world record

Huge congrats to Thomas Coville @Sodebo_Voile for sailing solo round the world
in less of 50 days, arriving on Xmas day.

When Francis Joyon took nearly two weeks off the solo RTW record in 2008, we figured it would be a long, long time before anyone became king of that particularly mountain.
Today, a new king will be crowned in what should go down as the most impressive feat of the year. 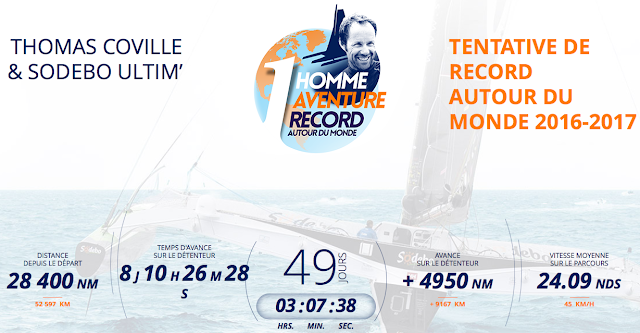 Thomas Coville is set to take more than a week off of Joyon’s still incredible mark when he arrives in Brest in a couple of hours, achieving a time that would beat even the crewed records until just a few years ago.
It’s interesting to note that fewer people have sailed around the world alone, nonstop in a trimaran than have walked on the moon – just Ellen Macarthur, Francis Joyon, and Coville, and each of them now have owned that all-important trophy.

Coville, along with his sponsor – convenience-store-sandwich-maker Sodebo – deserve massive accolades, and not just for the second-most important ocean sailing record in the world: Their perseverence and tenacity has been nothing short of incredible!
This is Thomas’ 6th attempt at the same record, and to come back and do it again after just the sheer heartbreak of missing it by just hours in 2014 – that’s the stuff of legends.

If you want to understand what it means to the French to have such ownership of the most important records in the sport, watch this video of a French naval pilot talking to Thomas a couple of hours ago.
Posted by geogarage at 1:26 AM