An ultra-high-resolution NASA computer model has given scientists a stunning new look at how carbon dioxide in the atmosphere travels around the globe.


Levels of CO2 in the atmosphere have surged past an important threshold and may not dip below it for "many generations".
The 400 parts per million benchmark was broken globally for the first time in recorded history in 2015.
But according to the World Meteorological Organisation (WMO), 2016 will likely be the first full year to exceed the mark.
The high levels can be partly attributed to a strong El Niño event.

While human emissions of CO2 remained fairly static between 2014 and 2015, the onset of a strong El Niño weather phenomenon caused a spike in levels of the gas in the atmosphere.
That's because the drought conditions in tropical regions produced by El Niño meant that vegetation was less able to absorb CO2. There were also extra emissions from fires, sparked by the drier conditions.
In its annual Greenhouse Gas Bulletin, the World Meteorological Organisation says the conditions helped push the growth in the levels of CO2 in the atmosphere above the average for the last ten years.


Greenhouse gases are vital to life on Earth, but the growing concentration of certain gases, such as carbon dioxide, is throwing the planet's delicate balance out of whack.
NASA is on the case, studying carbon dioxide on a global scale and its effects on our weather and climate.

At the atmospheric monitoring station in Mauna Loa, Hawaii, levels of CO2 broke through 400 parts per million (ppm), meaning 400 molecules of CO2 for every one million molecules in the atmosphere.
The last time CO2 was regularly above 400ppm was three to five million years ago, say experts.
Prior to 1800 atmospheric levels were around 280ppm, according to the US National Oceanic And Atmospheric Administration (Noaa).
The WMO says that the rise through the 400ppm barrier has persisted and it's likely that 2016 will be the first full year when the measurements show CO2 above that benchmark, and "hence for many generations".
While the El Niño factor has now disappeared, the human impact on climate change has not, the WMO argues.
"The year 2015 ushered in a new era of optimism and climate action with the Paris climate change agreement," said WMO Secretary-General Petteri Taalas. 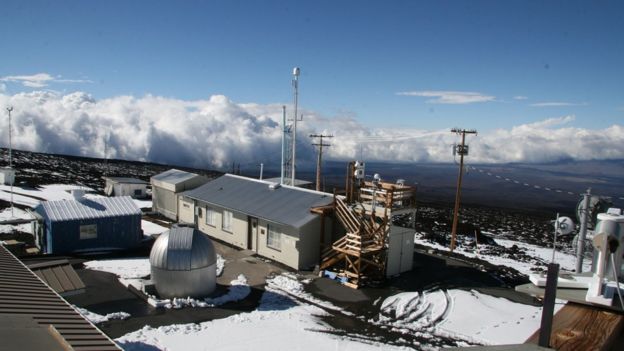 "But it will also make history as marking a new era of climate change reality with record high greenhouse gas concentrations."
The report also details the growth in other greenhouse gases, including methane and nitrous oxide.
In 2015, levels of methane were 2.5 times greater than in the pre-industrial era, while nitrous oxide was 1.2 times above the historic measure.
The study also points to the impact of these increased concentrations of warming gases on the world's climate.


From a quarter to half of Earth’s vegetated lands has shown significant greening over the last 35 years largely due to rising levels of atmospheric carbon dioxide, according to a new study published in the journal Nature Climate Change on April 25.
The greening represents an increase in leaves on plants and trees equivalent in area to two times the continental United States.

Between 1990 and 2015 there was a 37% increase in radiative forcing or warming effect, caused by a build up of these substances, from industrial, agricultural and domestic activities.
While welcoming new initiatives like the global agreement to phase out HFC gases agreed recently in Rwanda, the WMO argues that nations must retain their focus on cutting CO2.
"Without tackling CO2 emissions, we cannot tackle climate change and keep temperature increases to below 2 degrees C above the pre-industrial era," said Petteri Taalas.
"It is therefore of the utmost importance that the Paris Agreement does indeed enter into force well ahead of schedule on 4 November and that we fast-track its implementation."
Around 200 nations who signed the Paris climate agreement will meet in Morocco in November to decide on the next steps forward.